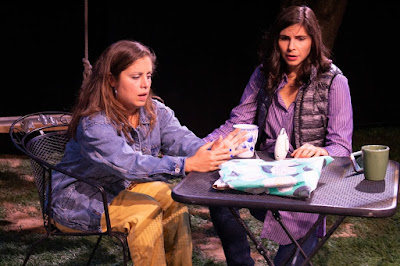 Gina Pulice's masterfully crafted production of Molly Smith Metlzer's "Cry It Out" allows its cast of four to inhabit their roles in such uninhibited, unhinged fashion, the conversations at hand unfold through such fresh eyes, it's impossible to look away for a single second for fear of missing something important to the story's telling.

This is a production where the actors don't just perform, they invest their roles with a natural, polyphonic richness that epitomizes the script's involved, compassionate take on a story that gets under your skin, rattles your senses and leaves you emotionally drained when the cynicism, angst, familiarity and the comfort of the conversations are dialed down right before the final fadeout.

"Cry It Out" is addictively watchable entertainment with a vital spark and voice of quivering intensity that offers fertile ground for interpretation by its already hooked, attentive audience. 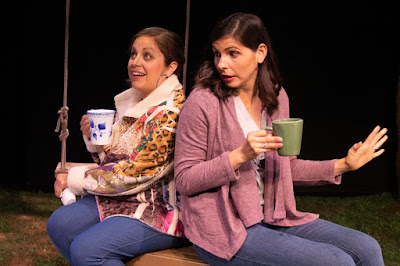 The title itself refers to sleep training methods that allow babies to shed tears and make a fuss for a set period of time before any parent intervention. The goal, of course, is to teach the infant to self-soothe and eventually drift off to sleep. It does not require a parent to allow their baby to cry out all night long without some degree of comfort, action and attention.

As penned by Metzler, "Cry It Out" examines the realities and myths of motherhood, birthing, infancy, maternity leaves, childcare vs. work, parenting, coping, fussing, comforting, stressing, miscalculating, sacrificing, reflecting and nurturing. It's all very direct, insightful and creatively forged by the playwright without any form of calculation.

As primary conversationalist for her play, Metzler offers theatergoers a smart, swiftly paced comedy-drama that is corrosively hilarious and mind-bending, chock full of irony, prickly wit, heartfelt sentiment and  structural involvement. There's also plenty of satisfying innuendo here, peppered with straight-referenced facts, connections, punchlines, four-letter words, infiltrating language and modernistic discoveries and outbursts that make everything in "Cry It Out" upfront and connected.

Staging "Cry It Out," director Gina Pulice gives authentic voice to Metzler's work, its conversations, its characters, its blistering exploration of motherhood, its joys, its conflicts and its daily repercussions. These issues and others are articulated with authenticity, rawness, honesty and conviction, thus making the story resonate with a decided purpose and impact at every dramatic or comedic turn. 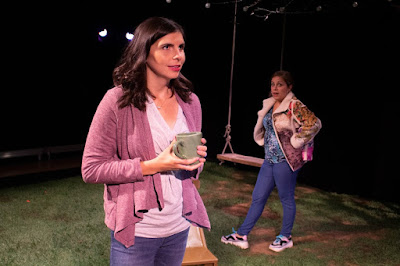 At Thrown Stone, "Cry It Out" is performed in three-quarter staging, a directorial process, seamlessly augmented by Pulice who lets the play live, sit and breathe from all different angles and dimensions that suit both the playing space and the material at hand. The actual arrangement of actor to audience also allows the theatergoer to experience and engage intensely with the play's on-going action and character interplay while also being able to see the reaction of other audience members throughout the theater. It's a voyeuristic conceit that heightens "Cry It Out's" evolution and enjoyment.

Given the three-quarter staging process utilized for this production, the actors, in turn, have to move, move, move continually - every 30 seconds is the rule of thumb - so that everyone can view the play's ongoing action unobtrusively. Pulice carries out this concept ingeniously and subtly, always knowing when to move someone and where to have them end up (and back again) without ever interrupting the flow of the piece, the conversations or the scene-by-scene rota dictated by the playwright.

Casting is everything in a play of this nature and Pulice surrounds herself with the best possible Equity talent for each and every one of the main roles - Clare Parme as Jessie, Maria McConville as Lina, Wynter Kullman as Adrienne and Jonathan Winn as Mitchell. 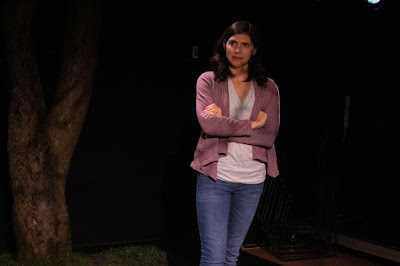 In the role of Jessie, a corporate lawyer on a leave of absence from work and fully engaged in newfound motherhood, Claire Parme offers a dynamic, sensitive, in-your-face portrayal of a woman grappling with baby monitors, child-rearing chaos, anxiety, insecurity and various domestic  challenges that keep her character hopping from early morning till midnight. Given the complexity of Metzler's writing for the character of Jessie, Parme is asked to portray a variety of emotions, mood swings and character turns, which she does so intuitively, everything she says and does rings true with amazing truthfulness and authenticity. It's a part that adds weight and perspective to the play and one that the actress manages to keep riveting from start to finish. As the wisecracking Lina, a terribly unsophisticated and ballsy South Shore mother who immediately bonds with her loving neighbor Jessie, Maria McConville delivers a fascinating, serio-comic turn that is so real and so fucking honest, you'd swear Meltzer had the actress in mind when she sat down to write her play. This is one of those performances that piques interest the minute the actress first appears onstage, starts talking and lets it all hang out in weighty, ticking fashion. She is always switched on, listening, moving, reacting or reciting Meltzer's dialogue with pleasurable accuracy.  That said, it's a thrilling, stand-out performance afresh with ferocious passion, vulnerability, zing, snap and lots and lots of inhabited personality. 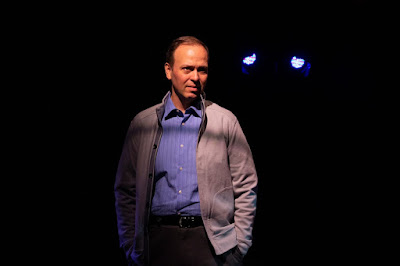 Jonathan Winn plays the part of Mitchell, a wealthy business entrepreneur who often spies on Jessie and Lina  through his telescope, with compassion, honesty, shyness and awkwardness, which, in turns, adds veracity to his deft portrayal of a man troubled by his wife's lack of interest and concern with their newborn baby. There's also a caffeinated restlessness and unspoken curiously about the character (in particular, his casual flirtation with Jessie) that Winn portrays with remarkable feeling and textured steadfastness. How the character ended up with the very castrating Adrienne is one of the play's biggest mysteries and concerns. 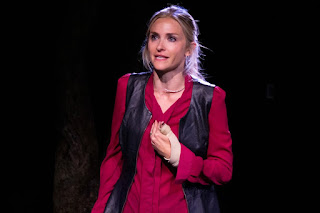 Wynter Kullman, as Mitchell's self-absorbed wife Adrienne, a successful jewelry designer in her own right, drips disdain, rudeness, obnoxiousness  and contempt so effectively from her very first entrance to her last, she gives new meaning to the title "Supreme Bitch," which, in the context of her work here, is meant as the highest of compliments. It's a strong, full-bodied performance layered with plenty of fire and fury until the ball drops and the character reveals an anguished back story guaranteed to reduce you to tears.

"Cry It Out" is a candid, intimate piece of theater that surprises, illuminates and thrills at every turn. A psychological fantasia about four very different people, it is a remarkable new work that speaks to its audience through intimate, revealing conversations that are truthful, profound, disturbing, acerbic and surprisingly cogent. With its sweeps of simple, in-your-face choreographed movement, it draws you into the action immediately and keeps you riveted for its full ninety minutes. It's theatre so superb, the end result is truly electrifying. 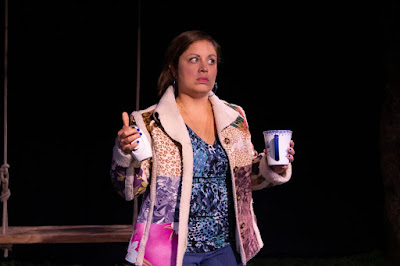 Posted by JimRuocco at 8:31 AM