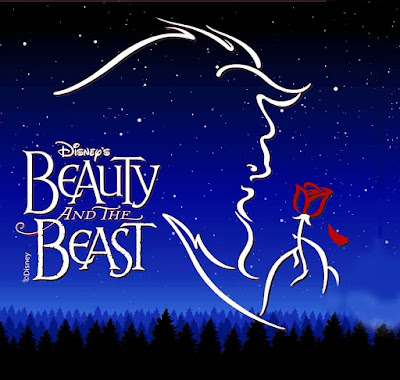 "I want adventure in the great wide out there. I want it more than I can tell."
(Belle, "Beauty and the Beast")

For enchantment, wit and glorious frivolity, look no further than Disney's "Beauty and the Beast."
It's heroine is a beautiful, confirmed bookworm pursued by a narcissistic, dumb-witted hunk who, for plot purposes, distances herself from his amorous advances and accidentally stumbles upon a handsome prince who has been transformed into a hideous beast by an evil witch but nonetheless, stays by his side and teaches him how to read, how to dance, how to love and how to be his very own person.

That's not all.
There's cavorting cutlery, a dancing carpet, high-kicking crockery and a bunch of real-life humans who have been transformed into half-turned objects - a mantle clock, a tea pot, a wardrobe, a feather duster, a tea cup, a candelabra, to name, a few - all for the sake of entertainment.

The stage version of "Beauty and the Beast," now on view at Sharon Playhouse, is a magic carpet ride of fun, excitement and exhilaration that gets you blitzed, ballyhooed, spellbound and energized in the most engaging of ways. So much so, a return visit is mandatory. That, plus a gin-and-tonic, a red wine or a frozen lemonade at intermission should keep you happily entertained for weeks on end. 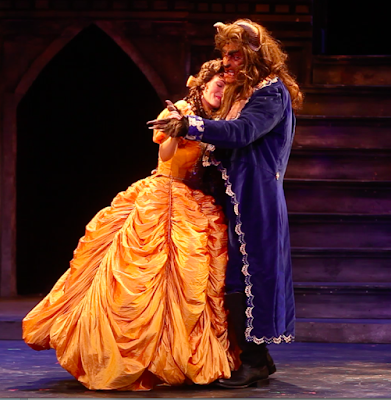 In a summer dominated by one-to-many productions of "Mamma Mia!" "Into the Woods" and "Cabaret," this Disney confection is a welcome diversion to dancing queens, childless bakers and their wives, smart-mouthed youngsters wearing red-hooded capes, homosexual cabaret performers, Nazis, disillusioned singers and writers, sexually-perplexed princes, musical divas past their prime, and finally, a boy, a cow, a magic bean and an anxious bride-to-be wondering which one of her mother's three lovers is actually her real father.

Overseeing the action for "Beauty and the Beast" is Alan Wager, an actor and director with a long list of credits including "Anything Goes," "Always...Patsy Cline," "Fiddler on the Roof " and "Oklahoma!" Well attuned to the mechanics of musical staging and casting, Wager crafts an ever-concise, hypnotic production that overflows with a jaunty sense of fun, a flavorful punch, a bouncy gallop and a buoyant exhilaration that heightens the mood, sensibility and cheerfulness of the popular Disney story. Everything falls into place nicely and fittingly. Nothing is taken for granted. Nothing is overplayed. Nothing is out of place. Instead, there's a decided flourish and gait to Wager's full-bodied interpretation. It's one that comes from the heart (he loves theater and everything about it) and it's one that respects the concept set forth by its originators including the story's (Linda Wolverton wrote the book) adventurous undercurrents, its satiric wit, it's good vs. bad philosophy and its involved, but very different love story. 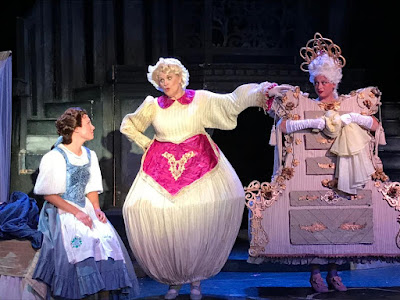 As director and interpreter, Wager makes great use of the Sharon Playhouse theatrical space without ever once overstepping its boundaries with unnecessary theatrics, staging, special effects or sight gags that detract from the material at hand. You'll find none of that here. Instead, Wager crafts a very intimate, involved musical that is very different from the one staged on Broadway, in London or on National Tour. Nothing fancy, just direct storytelling that actually brings a heightened spark, depth and resonance to his interpretation, matched by a one-on-one closeness between actor and audience that gives the material a newness, an enchantment and a magical sense of entitlement not found in previous productions of the oft-performed musical.

Adapted from the 1991 animated musical of the same name, the music for "Beauty and the Beast" was written by Alan Menken (lyrics) and Howard Ashman and Tim Rice (lyrics). The stage version includes songs from the original Academy award-winning film as well as musical numbers penned for the 1994 Broadway adaptation. This production also includes the original song "A Change In Me," which was written exclusively for Toni Braxton when she joined the Broadway edition in 1998 as Belle.
In this go-round, all 23 songs are performed intact. They are: "Belle," "No Matter What," "Wolves," "Me," "Belle (Reprise)," "Home," "Belle (Reprise II)," "Gaston," "Gaston (Reprise)," "How Long Must This Go On," "Be Our Guest," "If I Can't Love Her," "Wolves (Reprise)," "Something There," "Human Again," "Maison De Lunes," "Beauty and the Beast," "If I Can't Love Her (Reprise)," "A Change in Me," "The Mob Song," "The Battle," "The Transformation" and "Finale." 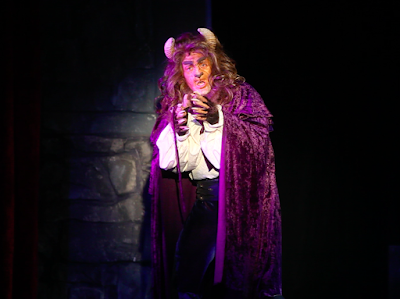 Then and now, the "Beauty and the Beast" musical score is a sumptuous feast of songs and musical numbers that bristle and shine and snap, crackle and pop with that classic, old-school Disney enchantment that the studio is famous for. Creative, melodic and lyrical, there is nothing formulaic about any of them. Their sound is uniquely their own- moving, simplistic, romantic and ethereal. Everything is truly inspired and fits harmoniously into the framework of the story, its evolution and its very happy ending.

Musical direction for the Sharon Playhouse production of "Beauty and the Beast" is provided by Patrick Hoagland (conductor/keyboard) with the able assist of a fine orchestral team comprised of Nathan Brewster (percussion), Adam Gloc (keyboard 2), Barbara Reineke (french horn), Dave Radovich (reeds) and Barney Stevens (violin). In addition to taking the cast through amazing, passion-filled and achingly beautiful vocals - both dramatic and humorous - Hoagland and company bring unmistakable truth and resonance to the score without every getting carried away or opting for over-the-top musicality for dramatic effect. 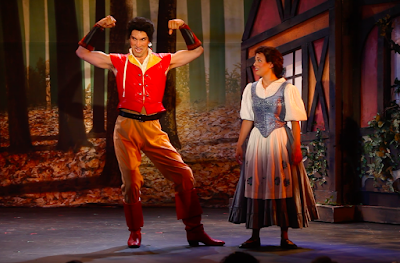 Here, you get great color, inherent weight and easy-listening verve, matched by frequent flights of whimsy, fantasy and wonderment. There's brightness and warmth. There's harmony and good cheer. There's dazzle and chutzpah. There's sweetness and candy-coated flavor. Nothing is too big or too small. It all conforms to the conceit of the show's originators which, under Hoagland's watchful eye, is both expressive and spontaneous. That artistry also gives the Menken/ Ashman/Rice score a certain wistfulness, grace and allure that serves the material well.

A song-and-dance number in "Beauty and the Beast" needs to cast its spell in glorious rainbow colors and take its audience on a truthful, emotional journey that is splash, dash and all that with all the Disney trimmings. Choreographer Cheryl Swift does exactly that (think, widescreen fashion) by serving up one big production number after another. Iconic, magical, stylish and amazingly polished with a dash or two of Disney Park-themed magic and luster thrown in for extra measure, she incorporates the right moves, the right combinations and the right ideas into such showstopping turns as "Be Our Guest," "Belle" and "Gaston," among others. Working from the show's bold, imaginative blueprint, she delivers musical numbers that catch the heat of the beat, the old-fashioned underscoring, the free-flowing dynamic, the indomitable sentiment and lastly, the infectious energy that remains the centerpiece of every "Beauty and the Beast" production. The cast, in turn, digests her creative intake swimmingly with good-feeling vibe and dedication that is strong, playful, focused and singularly championed in very inviting, deeply satisfying ways. 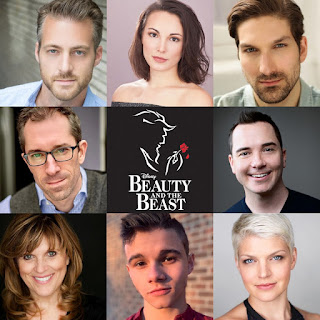 "Beauty and the Beast" stars Becky Whitcomb as Belle, Trevor Martin as the Beast, Daniel Patrick Smith as Gaston, Angel Hernandez as LeFou, Jesse Swimm as Lumiere, Michael Kevin Baldwin as Cogsworth, Debbie Prutsman as Mrs. Potts, RJ Vercellone as Chip, Leigh Martha Klinger as Babette, Johanne Borge Kesten as Madame De La Grande Bouche and Michael Britt as Maurice. Everyone is perfectly cast for their respective roles, each projecting the right attitude, mentality and personality associated with each of the parts they are asked to portray. As directed by Wager, they also offer more rounded, realistic portrayals of the characters with a smattering of Disney glitter and fairy dust thrown in for extra measure. Vocally, everyone masters the melodic lushness of the "Beauty and the Beast" score and demonstrates an impressive flair for the show's different musical styles, mood swings and important influences.

A beautiful retelling brimming with energy, charm and Disney magic, the Sharon Playhouse production of "Beauty and the Beast" is a major, magical achievement like no other. It pays homage to both the film and the original Broadway version, but dances to its own tune in terms of musical staging, performance and musicality. It enhances the wonderment and passion of the story with charm, gusto and warmth under director Alan Wager's expert tutelage. The musical numbers are everything you'd expect - and more- from the magical world of Disney. Everyone on stage offers fully-committed, three-dimensional character turns from leads, supporting players and members of the ensemble. And the ending, as expected, reduces you to tears...happy tears...that stream down your cheeks, thus, evoking those same magical feelings you once felt while watching the original animated film version and the many, many adaptations that followed including the 1994 Broadway production with Susan Egan and Terrence Mann and the 2017 live-action version that starred Emma Watson, Daniel Stevens, Luke Evans and Kevin Kline. 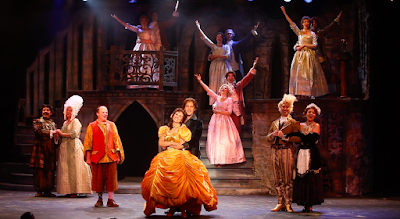 "You don't lose hope, love. If you do, you lose everything"
(Mrs. Potts, "Beauty and the Beast")

"Beauty and the Beast" is being staged at the Sharon Playhouse (49 Amenia Rd, Sharon, CT), now through August 4.
For tickets or more information, call (860) 364-7469.
website: sharonplayhouse.org.