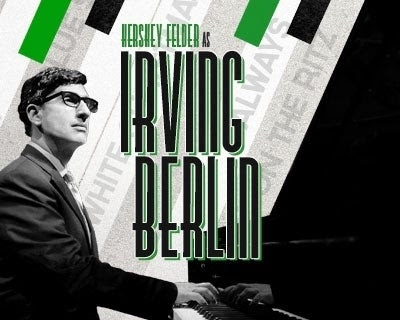 With a trunkful of songs that defined America for decades and a life that spanned more that 100 years, composer/songwriter Irving Berlin was an extremely simple man who wrote some of the most beautiful romantic ballads, novelty tunes, dance numbers and Broadway musical scores in songwriting history.


"Talent is only the starting point. Life is 10 percent what you make it, and 90 percent how you take it."
(Irving Berlin, American composer)

In "Hershey Felder As Irving Berlin," the life and times of this extraordinary showman is fondly remembered with Felder front and center, as actor and communicator, guiding us through the many highlights of Berlin's long and celebrated career. 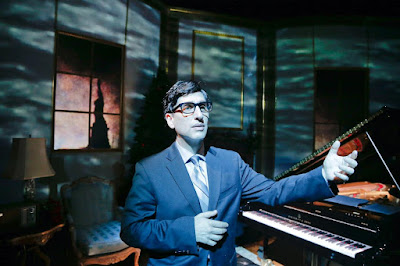 "Hershey Felder As Irving Berlin" is one of those rare treats in American theatre that cues up the songs, turns on the charm and intertwines the tragedies and triumphs with significant aplomb. The showmanship on tap is so remarkable, one quickly forgets that they are in a theater watching a show.  In turn, that one-and-one closeness between actor and audience prompts an intimacy that heightens the show's illusion and its punctuated warmth and resonance.

Staging "Hershey Felder As Irving Berlin," Trevor Hay not only celebrates and acknowledges Berlin's extensive repertoire, but delivers a fully-committed enterprise of tight, comforting pace that is slickly executed, imaginatively realized and supremely entertaining. Here, nothing is too big or too small. As director, Hay know exactly how a one-person show works, how it is to be staged before a live audience and how conversations, songs, dialogue and memories come together as one. With Felder in the spotlight for a full 105 minutes, Hay charts the composer's journey across decades and time with a ripe, thrilling sense of urgency, dedication and charm. You sit back transfixed anxiously enjoying the ride.

What's especially gratifying about this particular work is the docudrama at hand never gets overly bogged down with facts, history, songs, relationships and nostalgia. There's a lot going on but it's all very controlled, breezy and to the point. Songs are played and sung in clipped, regaling fashion that is short, sweet and bristling with refreshing panache. This being a musical entertainment, behind every song, of course, is a story. But when told, the conversation delights and never bores. Here, timing is everything and Hay and Felder are more than up for the challenge, never once missing a decided beat. 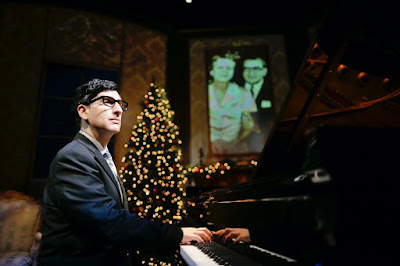 Working from Felder's breezy, enlightening play script, Hay shows what made Berlin great, why his songs were so popular, what made them so memorable, how they influenced American music of the times and how his vast song repertoire made him rich and famous. The flip side of  "Hershey Felder As Irving Berlin" allows Hay to focus on the composer's personal life, his Jewish heritage, his humble beginnings, his parents, his children, his marriages, his loneliness and his decision, late in life, to become a recluse at his exclusive Beekman Place residence. All of this is informative and compelling and addressed most engagingly.

As Irving Berlin, Hershey Felder delivers an exhilarative performance that is genuine, kinetic, comfortable and inviting. Singing, talking or simply playing the piano, Felder assumes the role of both Berlin and storyteller with a natural grace and flair that's hard to resist. Yes, he's played the role before. Yes, he's traveled the show from city to city. Yes, he knows the material front, back, center, sideways, backwards and forwards. Regardless, his performance is so real, so honest and so engaging, he makes you believe he's performing the material for the very first time.
A master craftsman, he knows how to tell a story, spin a joke or two, get you thoroughly involved and keep you guessing and wondering how things will finally play out. He also reduces you to tears when revealing some very tragic elements of Berlin's life involving the death of his first wife, his infant son and much later, the death of his second wife after 62 years of marriage. No matter what the story arc - there are several - Felder shifts gears unobtrusively like a chameleon of many colors, entertaining his audience with inviting ease. 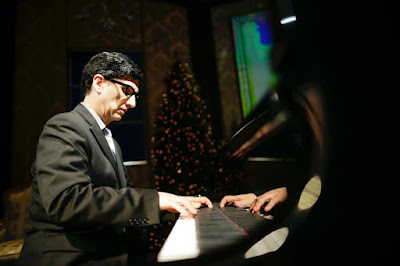 "Hershey Felder As Irving Berlin" is one of those rare, impressive one-man show's that uses song and conversation to paint a glorious, intimate portrait of one of America's greatest composers and songwriters. It dazzles. It shines. It entertains. It leaves you teary-eyed. The story is crisp, straight and personable. Trevor Hay's direction is smooth, sweet and exhilarating. And finally, Hershey Felder, as Irving Berlin, gives one of those strong, heartfelt performances that is not easily forgotten. A showman, a storyteller, an entertainer, Felder impresses at every turn. His take on Berlin, the man, the music, the times, the nostalgia, the sentiment and the heartbreak is charted with a fascinating rhythm and spirit that is the heart and soul of this particularly powerful and moving theatrical  piece.