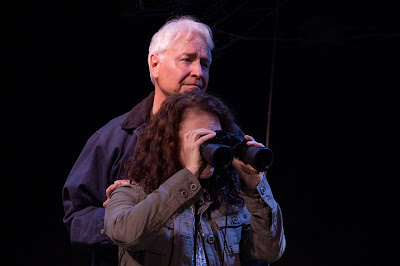 In "Birds of North America," an intimate, profound and thrilling two-character drama by a very talented playwright, the father-and-daughter team of John and Caitlin meet like clockwork every fall to bird watch and talk openly about life and other issues in John's suburban Baltimore backyard.

It's a meeting that they both look forward to with decided relish and one that prompts moments of laughter, anger, bitterness, cruelty, revelation, nostalgia, prejudice, obsession, jealousy, warmth and hatred, depending on what's actually going on in their lives at the time. All of this is carefully intertwined with actual bird watching of the simplistic kind and properly placed within the context of the piece to include intimate conversations about these creatures, their eating patterns, their silent winged migratory flights, their fight for survival, their identification and their specialized nesting habitats.

As written by Anna Moench, "Birds of North America" is both intelligent and humane, replete with lively, informative, aggressive banter that speaks openly and honestly to its audience without any form of calculation. As the characters struggle with hopes, ideas, regrets and rivalries, the structure of the play is not only ambitious, but it is one that prompts immediate curiosity and attention from start to finish. Moench wouldn't have it any other way. 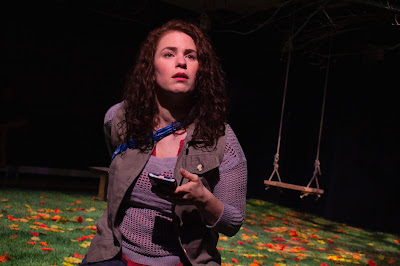 Both perceptive and emotionally wise, the language, its riddles, it character evolution and its frayed, edgy bewilderment, maintains an openness and integrity that works to the play's advantage. Yes, the playwright has a lot to say. Yes, there's a lot going on. Yes, the character's are going to be at each other's throats. Yes, every family has its share of problems. Yes, there's going to be a surprise or two to shake things up. Yes, the material is going to toy with your senses. Regardless, the story builds and builds with impeccable pacing and imagination, imbued with just the right amount of wry humor, pathos and linguistic savvy.

At Thrown Stone, "Birds of North America" gets the full five-star treatment its deserves - and then some.

Jason Peck, the director of "Birds of North America" brings an involved, cinematic fluidity and suppleness to Moench's story, offset by tension, pathos and humor that is minutely calibrated throughout the play's 95 minute running time with such authoritative flourish, freefall and excitement, it's impossible to look away for a single second. You're hooked. You're gobsmacked. You're on the edge of your seat. You're intrigued. And rightly so, because you're never quite sure what's going to happen next. And therein, lies the play's enjoyment and fascination. 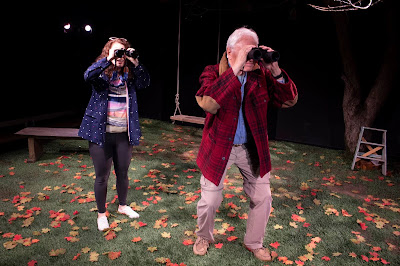 As with previous productions at Thrown Stone, "Birds of North America" is deftly performed in three-quarter staging, a directorial conceit, seamlessly implemented by Peck throughout the play's scene-by-scene evolution. It's an ideal vantage point that lets the play resonate and breathe in extreme close up from all different angles and dimensions that suit both the playing space, the actors, the characters, the material and the dynamic of the storytelling. The actual arrangement of actor to audience also allows the theatergoer to experience and engage intensely with the play's on-going action and character interplay while also being able to see the reaction of other audience members throughout the theater. It's a voyeuristic concept that Peck shapes intuitively and sensitively always knowing what buttons it push, when to stand back, when to let the material breathe, when to pause or digest an important moment, when to introduce a new story element or when to knock you completely on your ass with a twisty line of dialogue or a complicated change in the storytelling that you didn't see coming.

Given the three-quarter staging process utilized for this production, each of the play's individual actors, in turn, have to move continually around the playing space - every 30 or 40 seconds is the rule of thumb depending on the situation at hand - so that everyone can view the play's ongoing action naturally without any form of stagy distraction or overkill. One wrong move. One wrong turn. One wrong placement. And sadly, it's over for everyone involved, both onstage and off. 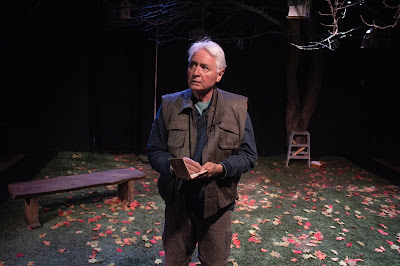 Peck, of course, never lets that happen. From rehearsal hall to stage, everything that happens in "Birds of North America" happens for a reason and purpose that, of course, is never questioned. Here, Peck brings dimension, nuance, snap and pulse to the piece, always knowing when to move someone around the stage, when to have them stop and converse at a particular point and when to start the entire process over and over and back again without ever interrupting the flow of the story, its voice, its ideally crafted conversations or the scene-by-scene rota dictated by the playwright. Elsewhere, the actual bird watching (lots of well-timed chirps and trills by Peck designed the atmospheric sound for "Birds") which has the characters looking anxiously through their binoculars from every side of the stage is so believably realized under Peck's tutelage, the actors actually make you believe they are seeing real birds (Tufted titmouse, American redstart, Chipping sparrow, to name a few) right before their very eyes. It's all very, very amazing.

As John and Caitlin, J.R. Sullivan and Melisa Breiner-Sanders are two tremendously talented actors who connect with the material, the dialogue, the story arcs and their roles so effortlessly, you'd swear the playwright wrote "Birds of North of America" with each of them in mind. They get the piece. They understand the piece. They love the piece. They perform the piece. And as the story evolves, they bring a mastered passion, honesty and practicality to the proceedings that makes each and every one of their character turns (the play takes place over a 12-year period)  resonate with complete believability, illumination and practicality.

"Birds of North America" is an affecting, emotional play of tremendous depth, style and conversation. The two member cast is outstanding and well they should be under Jason Peck's stunningly realized direction. The story, rich in detail and color, delivers an emotional wallop that pierces the heart. And like "Cry It Out," which is performed in repertory with this illuminating character study, the overall effect is one that lingers long after the play has ended and the house lights come up and it's back to reality for everyone involved. 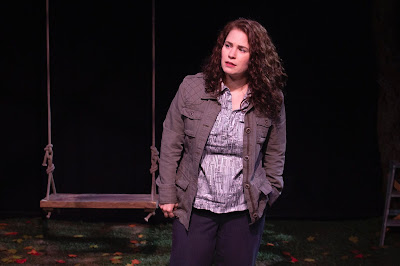