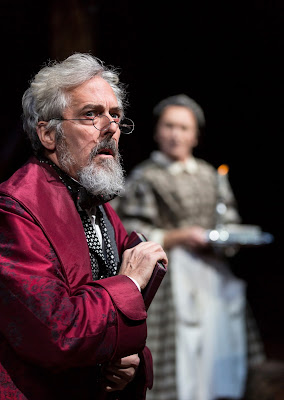 
"Bah! Humbug!
If I could work my will, every idiot who goes about with 'Merry Christmas' on his lips should be boiled with his own pudding and buried with a stake of holly through his heart"
(Ebenezer Scrooge ("A Christmas Carol")

And so, it begins.

In Hartford Stage's "A Christmas Carol," a thrilling, dark and eerie tale of Scrooge redemption and transformation, spirits fly through the air, dance eerily about the stage in frenzied Dickensian madness, soar high above the stage and disappear into the rafters or emerge through fiery trap doors, that, no doubt, lead to the depths of hell below. They also taunt, tease and scare the audience with wicked, nightmarish abandon when the script demands or commands that they do. Jump if you must, then settle back in your seat, and indulge.

That, of, course, is just one of the many marvels of this expensive, elegant, smartly-staged production that has dazzled and cajoled theatergoers for 21 years, many of whom return to this festive, enthusiastic heart-warmer year after year or bring with them someone new who, strangely, has never seen a live version of "A Christmas Carol" before.

This "Christmas Carol" provides everything you might want and expect from a stage adaptation of Dickens's classic and timely morality tale. In turn, it's impossible not to be moved. 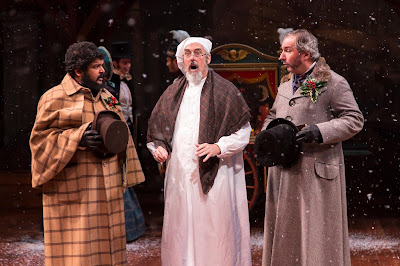 Adapted and originally directed by the very talented Michael Wilson (Artistic Director, Hartford Stage, 1998-2011), the production, then and now, retains much of Dickens's flavorful Victorian language, its marvelous presentiments and observations, it studied history and sense of detail, its clash of cultures and customs and its mad, piercing sounds of thunder and lightning that snap, crackle and pop in deliciously wicked and frightful delight. All of which is impossible to resist in this epic interpretation of the famous 19th century English holiday classic that Wilson has shaped and molded with the mindset of a skilled, well-versed Oxford scholar.

The story of "A Christmas Carol" is a familiar one.
Ebenezer Scrooge, a miserable old miser of considerable wealth and fortune finds himself hating almost everything that has to do with Christmas from gift giving and Christmas caroling to family gatherings and celebrations that pay homage to Father Christmas and that gooey, contagious holiday cheer he absolutely loathes. He, of course, will have absolutely nothing to do with it.
But all of that is about to change.


"Christmas! A poor excuse for picking a man's pocket every twenty-fifth of December"
(Ebenezer Scrooge ("A Christmas Carol")

On Christmas Eve, the ghost of his deceased business partner, Jacob Marley comes calling to warn him about his dastardly deeds and unkind treatment of those around him. In short, if he refuses to change, he'll end up sad, lonely and unhappy in the afterlife just like you-know-who.
To set the record straight, Marley, through unexplained means, invites the Spirits of Christmas Past, Present and Future to pay Scrooge a visit hoping to elicit change by showing him moments from his life that could and will prompt his eventual downfall. You pretty much know the rest. 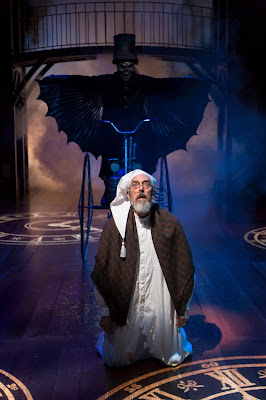 Staging "A Christmas Carol," director Rachel Alderman crafts a production of remarkable fluidity, resilience and emotional openness. Her take on Charles Dickens is intuitive, beguiling, edgy, dizzying and palpable. She leaves no stone unturned. This is London, make no mistake about it. But it's London, Dickens style, in all its wonderful angst, glory and wooly patchwork. Every piece of the Dickensian puzzle is addressed by Alderman from clocks that spin and spin high above the proscenium stage or dance around the theater floor to ghosts that haunt and taunt at midnight and thereafter to opportunities that are lost for good whilst elsewhere, unhappy families and workers long for something blissful and wonderful at Christmastime.

Though she has directed "A Christmas Carol" before, Alderman never looks back. Here, she brings great knowledge and freshness to the piece, which keeps it completely spinning and spinning, so to speak, from scene to scene and act to act. She has fun with the material. She has fun with the staging. She has fun with both the actors and audience and often throws in a jolt or surprise or two to liven things up, catch everyone off guard or simply knock you and yours on your ass. Whatever her choice or choices, she does it most engagingly. 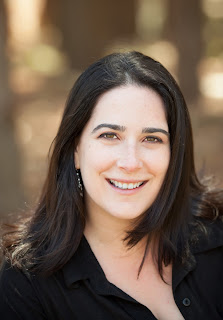 "There's a reason this story resonates and there's a reason we need to revisit it every year. It matters. Stories of change and redemption and community matter and help us grow. It's not just the glitter that stays with you. It's the story and it's the production."
Rachel Alderman, Director ("A Christmas Carol")

What's especially enlightening about this particular version of  "A Christmas Carol" is that it never mistreats, mistrusts or missteps the actual material on which it is based. Alderman has done her homework and done it well. The pacing, the shading, the nuances, the colors, the interactions, the characterizations, the line delivery, the positioning, the stage movement and the blocking is real, rich and exciting without any form of calculation or hesitation. 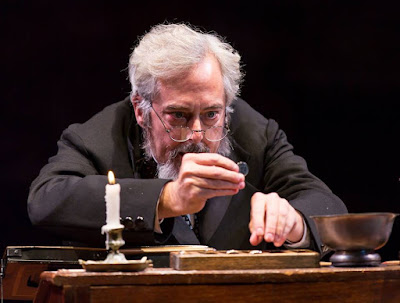 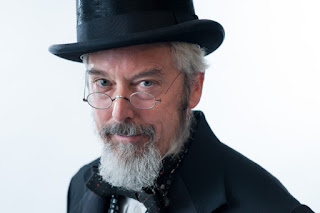 Playing Ebenezer Scrooge for the second consecutive year in a row, Michael Preston is excellent at every phase of Scrooge's redemptive journey. From the moment he steps onto the stage right through the final curtain, he's the real deal. He's cantankerous, condescending, miserable, bullying, unkind and totally oblivious to the world around him, just the way Dickens intended. Moreover, Preston inhabits the role in such engaging, money-grabbing ways, we not only want to follow him on his journey toward eventual redemption but cheer him every step of the way.

As an actor, he infuses Scrooge with proper temperament, heartbeat, twisty repertoire and pulse. He gets Scrooge. He thinks and acts like Scrooge. He is also very proud of the fact that he hates all things Christmas. But at the same time, he brings a vulnerability and curiosity to the part which works especially well, particularly in the second half of  "A Christmas Carol." 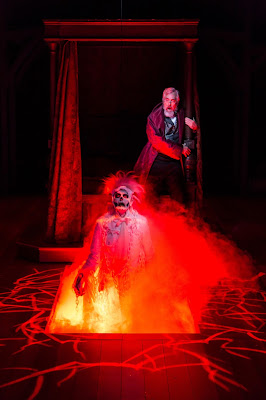 As the chained and tormented Jacob Marley, the ever-versatile Noble Shropshire is appropriately spooky, menacing and demonic as he taunts Scrooge with his twisted pronouncements and declarations about doom, gloom, hardships and suffering and how his own selfish ways have led to his own punishment. The performance, the staging and the sound-and-light show that ensues, is all quite spectacular with Shropshire basking in all its creepy glory. Elsewhere, the actor assumes the role of Scrooge's horse-faced housekeeper Mrs. Dilber, a part he amusingly portrays with well-timed silliness and cheeky high camp, thus, eliciting hearty, well-deserved belly laughs whenever he's on stage. One eagerly awaits his every entrance. 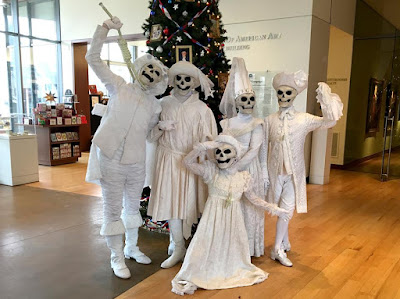 Enchanting, joyous, breathtaking and thrilling, this "Christmas Carol" is a love song to all things English, yuletide and Christmas. Its oft-told tale of redemption is both atmospheric and Dickensian, chock full of wisdom, spectacle, nostalgia and Victorian exuberance. Brilliantly staged, it is certainly done with the just the right amount of dash, spirit and irony.
See it, you will. But be forewarned, once the spell is broken and all thoughts of Charles Dickens and Ebenezer Scrooge fade into memory, you're more than likely going to return for a second or third helping. Christmas pudding aside, it simply cannot be helped. 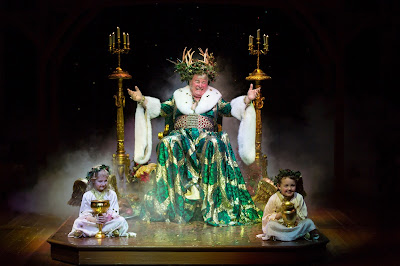 "A Christmas Carol" is being presented at Hartford Stage (50 Church St, Hartford, CT), now through Dec. 29.

Posted by JimRuocco at 4:53 AM