From the Desk of Jim R, Take 2, Column 145, A Review: "The Merchant of Venice" ( Valley Shakespeare Festival)

These nine actors are the heart, soul and pulse of Valley Shakespeare Festival's "The Merchant of Venice," a thrillingly adventurous, slick retelling of the Bard's popular comedy about multiple romances, uncomfortable couples and complicated relationships that are playfully bandied about from beginning to end in grand, over-the-top, wickedly inventive staging that heightens the comic veracity and crackle of this oft-performed work.

This is one of the most charming, resourceful plays on the theater leader board this month, or any month, for that matter. It soars. It hops. It dances. It delights. It skips. It sings. It enlightens.
It not only celebrates all things Shakespeare, but also finds new ways to replay the comic mayhem and conflict of the story (the love-test casket lottery, for example) by injecting just the right amount of well-orchestrated camp, modernity, kitsch, sincerity and surprise to the proceedings without any form of overkill or calculation. Here, everything is perfectly timed and played out with little sprinkles of improvisation here and there along with the breaking of the actor's fourth wall, a pleasurable conceit that occurs only when it's entirely plausible to drop character and tease, taunt or cajole the audience. It all works, quite splendidly. 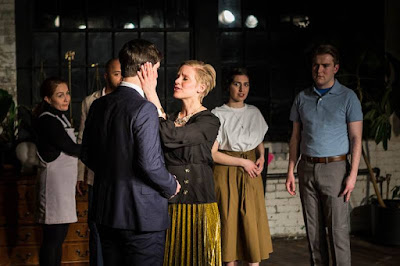 The story, in a nutshell, goes something like this.
Antonio, the over-anxious bisexual merchant of the play's title, agrees to loan money to his friend, the magnetic Bassanio, so that he can woo the beautiful wealthy heiress Portia. But since Antonio's money is tied up in his shipping industry, he is forced to seek the help of the Jewish moneylender Shylock to acquire the necessary funds.
Shylock, of course, dislikes Antonio (that's obvious) but nonetheless, lends him the money on the condition that if he defaults, Shylock is entitled to a pound of Antonio's flesh (bloody hell). Ultimately, Shylock can't collect on his end of the deal (clever disguises, deceit and legal poppycock ensue) because of the harm it would cause Antonio, and a very happy Bassanio marries his beloved Portia.
The mismatched lovers scenario also involves Jessica, Shylock's daughter, a lovely young woman  who finds herself enamored with Lorenzo, a penniless Christian and Gratiano, a garrulous young man who ends up completely smitten with Nerissa, Portia's confidante and lady-in-waiting.

"The Merchant of Venice" finds its strength in Tom Simonetti's swift and steadied exploration of the play, its colorful patches of whimsy and craziness, its playful romanticism, its power, its heartache, its shattered dilemmas, its mercenary actions and its grab bag of characters, many of whom bear a strong resemblance to those found in "As You Like It," "Twelfth Night" and "A Midsummer night's Dream," among others. 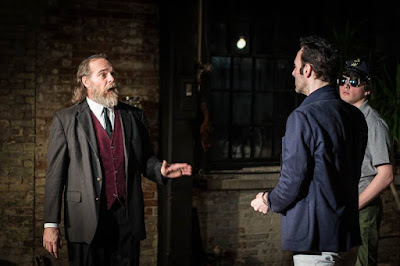 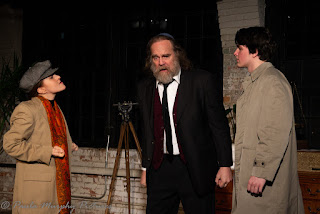 What's fun about Simonetti's take on the Bard's comedy is that you never quite know what's up his sleeve. As director, he is inventive, stylish, compassionate, caring and well versed in the machinations of Shakespeare's world and its populace. He gets the Bard. He likes the Bard. He understands the Bard. He appreciates the Bard. He is also full of surprises, all of which catch you off guard, knock you off balance, prompt giddy laughter and applause in all the right places and bring a smile to your face when you least expect it.

Not your usual incarnation of the play, Simonetti's edition opts for 21st century modernity with costuming that suggests the 1960's and 1970's of Soho, Carnaby Street, Camden Town and Greenwich Village. Housing the play on the second floor space of a reconverted 1890's garment factory with brick walls, hardwood floors, shadowy lighting and shiny glass windows reminiscent of loft spaces in both New York and London heightens the play's allure, mindset, drama, romantic nature and charm. 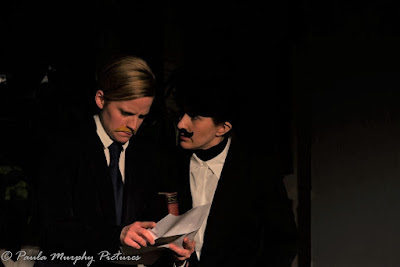 The closeness of actor to audience also provides a marvelous intimacy to the piece, which Simonetti utilizes to full advantage, from actors speaking directing to certain members of the audience, taking a seat among them, asking them to recite Shakespearean passages from cue cards on strategically placed gift boxes or having his cast of nine enter and exit from up and down the center aisle, the left aisle or the right. It's all carefully envisioned with an air of crisp spontaneity that keeps the action moving forward at a steady, brisk pace that never once looks rehearsed or manufactured.

For this go-round, Simonetti also looks to Italian filmmaker Federico Fellini ("La Dolce Vita," "Casanova," "8 1/2," "Juliet of the Spirits") for inspiration. In particular, the maestro's overt flamboyance and melodrama, his decadent sexuality and fantasies, his timely artistic expressions and his vibrant, personal eccentricities. Mixing Fellini with the Bard not only fascinates and stimulates, but gives "The Merchant of Venice" a visual, carnival-like kick (the gondola sequences, up and down the center aisles, for example) and snap that is wonderfully imagined throughout Simonett's colorful presentation. 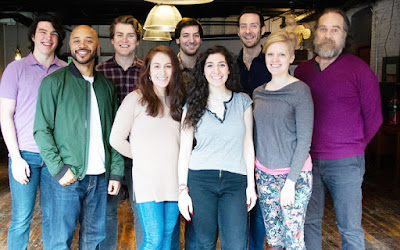 "The Merchant of Venice" stars Joe Penczak as Shylock, Katie Zaffrann as Portia, Brian Ott as Lorenzo/Prince of Aragon, Zak Risinger as Antonio/Prince of Morocco, Josh Johnston as Bassanio/Tubal, Andie Lerner as Jessica, Kendall Segovia as Nerissa/Solanio, Daniel Rios, Jr.as Gratiano and Killian Meehan as Launcelot/Salerio/Jailer/The Duke. All nine performers are well versed in the language of the Bard which they recite with assurance and intelligence, thus, giving the material its unifying grace, lift, eloquence, spirit and intimacy. They have fun. We have fun. They know Shakespeare inside out, backwards and forward, front and center.
Everyone brings a wonderful collection of expressions, emotions and acting styles to their individual or multiple roles. Moreover, they take hold of them, shape them to their liking and make them their own (no two actors are alike), which in a production as intimate as this one, makes all the difference in the world.

Joe Penczak's portrayal of Shylock is both fascinating and passionate. His recitation of the Bard's words is fluid, intelligent and original. There's also a sense of stratified victim, avenger and survivor to his characterization, which is very exciting to watch. As Portia, the young woman who longs for love and all its impossibilities, Kate Zaffrann offers a full-bodied portrayal that is rich in conversation, character, discovery and impetuosity.

Zack Risinger, in the role of the brash Antonio, delivers Shakespeare's lines with a deep, heartfelt emotion that is natural, enduring and always compelling. As his beloved friend Bassanio, Josh Johnston naturally fits the part of gentleman, kinsman and lastly, the worthy suitor who masterfully identifies the casket that contains Portia's portrait. It's a well-rounded performance chock full of good-natured ambition and smack-dab attitude. 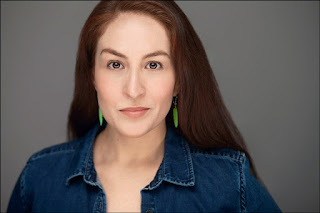 Kendall Segovia brings plenty of charm and personality to the part of Nerissa. It's a richly amusing performance that blazes brightly whenever she's on stage. Andie Lerner's portrayal of Jessica, the daughter of Shylock who flees her father's control and runs off with Lorenzo, is inspired, nuanced and completely enjoyable. Both she and Segovia share an obvious passion and understanding for Shakespeare that heightens their attention-grabbing work whenever they are on stage.

As Lorenzo, the young man who eventually elopes with Jessica to Belmont, Brian Ott conjures up a performance that is bright, silly, inventive and perfectly in sync with the mindset of Shakespeare's popular comic tale. Daniel Rios, Jr. has a fine grasp on the part of the garrulous Gratiano, which he plays most advantageously with thrilling snap, vigor and vitality. 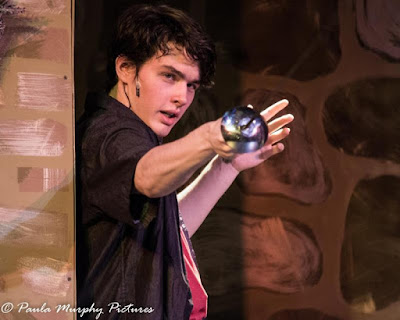 Killian Meehan, a dead ringer for a very youngish Tom Cruise (long before Nicole Kidman, Katie Holmes, Scientology and daughter Suri), pops in and out of "The Merchant of Venice," playing a quartet of different roles - Launcelot, Salerio, the Jailer, the Duke. A free-spirited talent, so real and refreshingly compassionate, he toggles intuitively between his many characters with an RSC craftsmanship and control that comes completely and directly from the heart. His recitation of Shakespeare bursts with boldness and a swell of zigzag intellect and pulse, but never once do you sense the actor's tools at work. And therein, lies the brilliance that is Meehan.

Effective, pleasurable and thoroughly engaging, "The Merchant of Venice" is a Shakespearean treat that celebrates the Bard and his popular story, his raucous characters, his inspired language and his deeply moving, plot advancing conversations. The cast has great fun running merrily through the play's light, zany and darker elements. And with director Tom Simonetti effectively pulling the strings,  much to the delight of everyone in the audience, VSF is at the very top of its game....and then some. 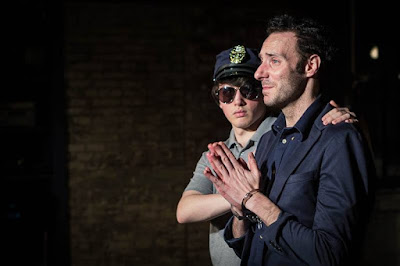 Posted by JimRuocco at 8:47 PM