From the Desk of Jim R, Take 2, Column 174, A Review: "The Two Gentlemen of Verona" (Valley Shakespeare Festival) 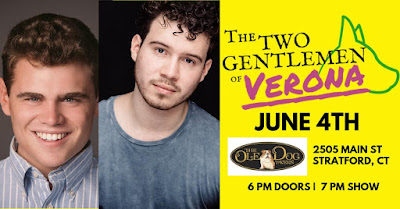 Anyone familiar with the comedies of William Shakespeare knows exactly what to expect from storylines that end happily with lovers and families united,  the celebration of a marriage or two and a bit of wisdom unleashed right before the final fade out.

Such is the case with Valley Shakespeare Festival's lively, wonderfully wacky mounting of
"The Two Gentlemen of Verona." 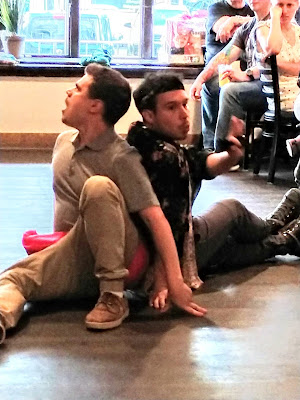 Packed  with these and other sorts of giddy up devices all designed to delight and cajole, Valley Shakespeare Festival's "Two Gentlemen" never falters for a moment.

It's impossible not to be hooked or gobsmacked by the thrill of it all.

At the center of this non-stop merriment are just two actors -  Matthew Macca and Eric Bermudez.
And yes, they play all the parts.
Really?
Yes, really. 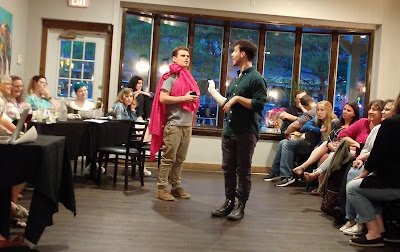 Valentine: a young gentleman in love with the Duke of Milan's daughter Silvia.

Proteus: a young gentleman completely smitten by the lovely Julia.

Silvia: the Duke of Milan's daughter pursued by the lovesick Valentine.

Duke of Milan: the father of Silvia who insists his daughter marry Thurio.

Eglamour: a knight at the Duke's court. 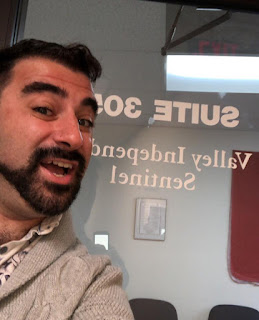 Directed by Tom Simonetti, who adapted Shakespeare's text to its specially, refitted format, the production is ablaze with a comic fizz, zing and snap that does justice to the original story (believed to have been written between 1589 and 1593) and its reworking for a modern day audience. Here, as in VSF's recent staging of "The Merchant of Venice," he is in fine form. As director, he brings a knockabout madness to the piece and creates a buoyant, giggly charm oozing with full-tilt verse, organized zaniness, revolving sputter, a touch of sprawl and lots of absurd physicality.

What's especially fun here - and something that Simonetti gets right at every single turn - is the enduring comic power of the piece and its fluid staging. It's all well thought-out and planned to evolve at breakneck speed. But at the same time, there's plenty of room to improvise, toss in a timely reference, add some impromptu shtick or interact with the audience by bringing them up on stage to play trees, take off their shoes for some candid comedy bits or having them recite Shakespeare (in character, of course) off some hand-written pieces of paper. 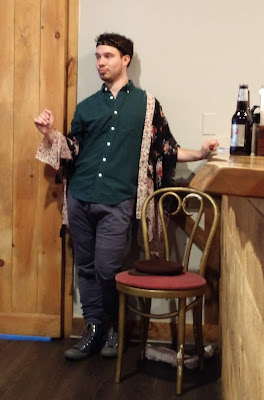 An added bonus of "Two Gentleman" is the utilization of the actual Ole Dog Tavern dining room space which lends itself nicely to the in-the-round staging devised by Simonetti. This conceit allows a special closeness between actor and audience that not only heightens the play's appeal but thrusts everyone happily into the action at hand. Of course, anything can happen and does even when food is being served by waiters and one of the actor's decides to stop by a table and steal fries off someone's plate, pour a glass of wine for someone else or look a third person in the eye and say, "You really have no idea what the play is about, do you?"  Whatever the case, it all works quite splendidly.

The casting of Matthew Macca and Eric Bermudez is a stoke of genius on Simonetti's part and one that unfolds with both imagination and creative aplomb. In order for the play to work its magic, you have to have actors who can shift gears immediately, change from one character to the next and back again within a millisecond, think very quickly on their feet and finally, remain deeply rooted in the deeply silly antics of the actual story, as dictated by Simonetti. 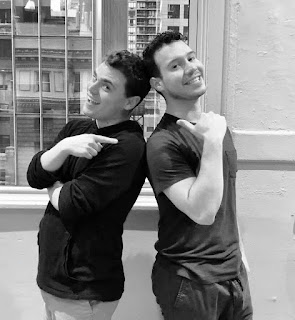 The "anything goes" atmosphere of "Two Gentlemen" allows both actors to display their creative aesthetic 100 percent as they get swept up in the madness of it all. Changing costumes in full view of the audience while racing here, there and everywhere, they are a charismatic twosome whose sprint dashing and comedic range is completely refreshing, entertaining and absolutely glorious. They are inspirational, kitschy, personable and charismatic duo, reveling in the intended free-for-all, the priceless tomfoolery and the over-the-top amusement of the piece.

In conclusion, "The Two Gentlemen of Verona" succeeds on all levels. It is fun for everyone involved. It is blessed with a team of actors and a behind-the-scene's staff who not only understand the workings of the Bard, but aptly inject the production with just the right blend of wit, craziness and engagement.
Under Tom Simonetti's playful direction, the preening, the comedy and the delivery of Shakespeare's verbage is splendid, thus, heightening the show's wonderful sense of spirit, gaiety and unity. And finally, this oft-produced satire of romance and its exploration of love, friendship, bonding and loyalty is both bright and twinkly, providing good vibrations and knock-em-dead nuttiness for all involved. 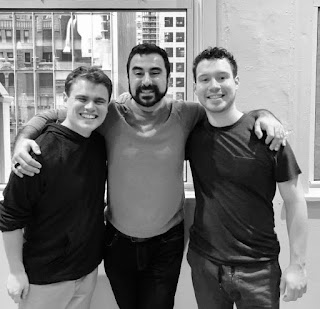 "The Two Gentlemen of Verona" was staged by the Valley Shakespeare Festival at The Ole Dog Tavern (2505 Main St., Stratford, CT) on June 4.
For information about upcoming productions, call (203) (513) 9446.
website: vsfestival.org