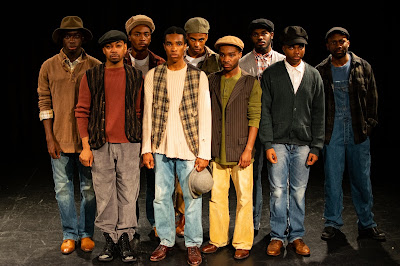 On the evening of March 31, 1931, after a fight broke out on a southern railroad freight train in Jackson County bound for Memphis, nine black youths, ranging in age from 13 to 19, were arrested by local authorities on minor charges. But when the police questioned two white women - Ruby Bates and Victoria Price - they openly lied and accused the boys of raping them while traveling onboard the train.

The teenagers were immediately transferred to the local county seat in Scottsboro, Alabama to await trial. Despite their innocence, eight of them were sentenced to death by an all-white, all-male jury because of the color of their skin. The youngest boy, however, was sentenced to life imprisonment rather than execution following a hung jury and a mistrial.

Re-imagining one of America's most notorious injustices in the form of a musical minstrel show that purposely exploits that over-exaggerated form of prejudicial entertainment, "The Scottsboro Boys," at Playhouse on Park, emerges a stirring, moving and eclectic production that mixes gospel, blues, jazz and vaudeville, magnificently. 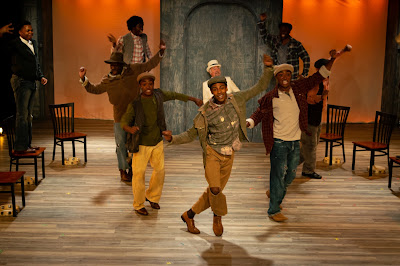 Determined, intelligent and often jarring, this is one of those jaw-dropping musicals that overflows with invention, resonance and braveness, all in quick-step fashion. It also opens ugly wounds, draws blood, kicks you in the ass and makes you uncomfortable as it dances shamelessly to the beat of minstrel music using songs and dialogue designed to jump start the story, piss you off, carry it onward to elation, then, piss you off again, which is reason enough why this particular production should be seen.

Staging "The Scottsboro Boys," director Sean Harris brings tremendous insight, sympathy, and texture to the musical, mixed with a ferocious passion and angst that heightens the play's concept, its despair, its history and it's dramatic weight. That approach epitomizes the production's hallmark undercurrents, its sense of purpose, its immersing resonance, its historic relevance and its vital spark.  Directorially, Harris has rehearsed the production well, knowing what works, what doesn't, how to frame an individual scene or group moment, how to let the material sit and breathe, how to stage the action fluidly and dramatically and how to ground the story into realistic moments in between the show's big, key musical numbers. He succeeds swimmingly. 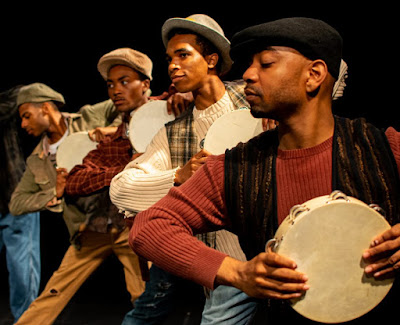 The Kander and Ebb musical score for "The Scottsboro Boys" features an eclectic mix of 17 different plot-driven musical numbers. They are: "Minstrel March," "Hey, Hey, Hey, Hey!" "Commencing in Chattanooga," "Alabama Ladies," "Nothin,' " "Electric Chair," "Go Back Home," "Shout!" "Make Friends With the Truth," "That's Not the Way We Do Things," "Never Too Late," "Financial Advice," "Southern Days," "Alabama Ladies (Reprise)," "Zat So," "You Can't Do Me" and "The Scottsboro Boys." Not your typical brand of show musical, the score, nonetheless, tackles the subject matter diligently and harmoniously with plenty of verve, drive and cynicism. Each and every one of the songs is important to the telling of the story, the seriousness of the material and the characters who sing them.

Musical direction for "The Scottsboro Boys" is provided by the very talented Melanie Guerin whose Playhouse on Park credits include "In the Heights," "Murder for Two" and "Peter and the Starcatcher." Doubling as keyboardist and conductor, she is joined by band members Olivia Moaddel (violin), Elliot Wallace (drums, percussion), Allison Lazur (tuba), Morgan Brown (guitar/harmonica), Harry Kliewe (reed), Andrew Janes (trombone) and Tucker Barney, Brandon Dixon and Andrew Ploud (trombones). 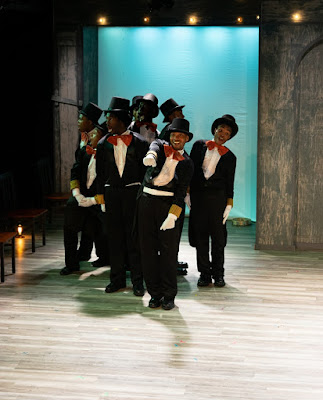 Guerin and her orchestral team deliver the Kander and Ebb score with brilliant precision and showmanship, offering introspection, pulse, simplicity and abrading tension to the song repertoire. Everything unfolds with a crisp, well-rounded dash and spring that is deeply intelligent and thoughtful. The playing is so real and so convincing, the basic, rhythmic and melodic foundation implemented by the composers develops into a resounding interpolation for all.

Multi-talented Darlene Zoller whose rigorously designed, marvelously complex choreography has graced the Playhouse on Park space - past and present - thrusts "The Scottsboro Boys" into full swing, using specially designed, important dance steps, patterns and movements to carry the story forward amid the snap, hustle and seriousness of  David Thompson's writing.  Here, as in other musicals she has choreographed including "In the Heights," "Chicago," "A Chorus Line" and "Cabaret," Zoller grounds this production in a choreographic versatility that is performed with a lyrical spunk, grace and expressiveness which supports and embraces the unified style and movement of the piece. She also instills a jaunty spirit and confidence within each of the actors who move engagingly about as dancers, thus, allowing them to groove with ease, turn up the heat and stomp madly about the Playhouse on Park stage with determined zeal, driving home the universal message and fearlessness behind "The Scottsboro Boys" story. 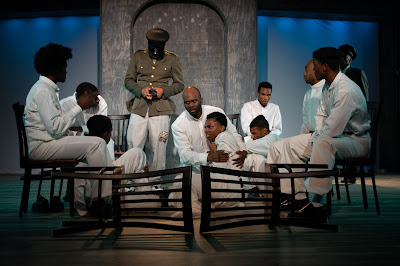 The two-act musical casts Troy Valjean Rucker, Justin Sturgis, Jerry Hamilton, Trishawn Paul, Cedrick Ekra, Alex Robertson, Jaylan Evans, Grant Reynolds and Cedric Greene as "The Scottboro Boys" of the show's title. They are joined by Dennis Holland, Ivory McKay, Torrey Linder and Renee J. Sutherland. All thirteen performers, many of whom play various roles throughout the musical, pull their weight with tremendous vigor, stamina, resonance and confidence. Some parts, of course, are showier than the rest, but everyone, musically and dramatically, unites to bring theatrical life to this complicated, committed story. Moreover, they are living their respective roles rather than acting them. It's a conceit that is something to behold as "The Scottsboro Boys" inches toward its big, bold surprising conclusion. It's one of those final moments that you didn't see coming, but it's one that will grip you by the throat, shake you up and reduce you to tears that linger long after the production has ended.

"The Scottsboro Boys" is a major achievement in musical theatre. It is clever. It is provocative. It is unique. It is electrifying. It also painfully reminds one of the white bigotry of the past and how nine innocent men were accused of raping two white women just because they were black. It's a message that stings, angers and hits hard in this immensely powerful true-life tale of racism, delivered in hypnotic musical form by John Kandler and Fred Ebb. 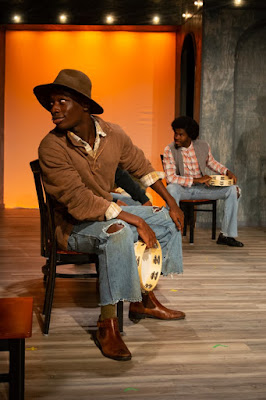 Photos of "The Scottsboro Boys"  courtesy of Meredith Longo

Posted by JimRuocco at 9:11 AM