From the Desk of Jim R, Take 2, Column 184, A Review: "Because of Winn Dixie" (Goodspeed Musicals) 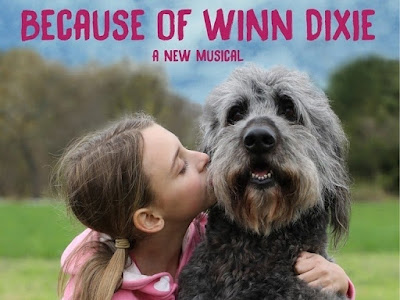 A 13-year-old girl.
A preacher father.
A move to a small Florida town.
The discovery of lozenge candies that taste like root bear.
An eclectic mix of townspeople.
A bit of sadness.
A lot of good cheer.
Conversations intertwined with music and dance.
A summer rainstorm or two.
And oh, yes, the arrival of a very big, loveable stray dog .

Welcome to the world of "Because of Winn Dixie," the 2013 Duncan Sheik/Nell Benjamin musical based on the popular 2005 film of the same name that starred Jeff Daniels, AnnaSophia Robb, Elle Fanning and Dave Matthews. Taking it's cue from Kate DiCamillo's cute and sunny 2002 novel, it casts a dog - a very big one at that - as its star.
That's STAR in capital letters. 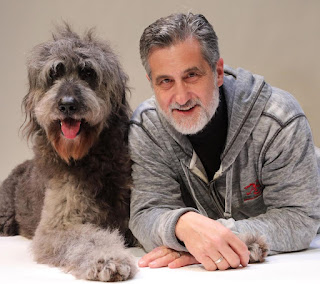 Bowdie, the dog commissioned by Goodspeed Musicals to play Opal's canine best friend in their big summer musical presentation is one of the smartest, cleverest, well-trained animals to ever set foot on stage in a musical during the last decade or two.
Mind you, this isn't just any dog.
He's on stage for most of the production (a smart decision by all involved). He knows his cues inside out, frontwards and backwards, left, right and center and upside down. His interaction with everyone in the cast is absolutely amazing. His entrances and exits are incredibly timed and staged as are his licking of faces, licking of windows, jumping on and off furniture and stealing food from his human co-stars.
And get this, during the show's big thunderstorm scene, he runs in perfect harmony on a treadmill -  center stage, of course, - to the beat of the music and the special effects that surround him.
Incredible! Oh, yes!
It's one of the main highlights of Bowdie's performance.

Trainer Bill Beroni, the man in charge of guiding Bowdie through the central role of Winn Dixie and turning him into a real-life leading player, night after night and day after day at the Goodspeed, is well deserving of all the accolades and standing ovations that have come his way since the musical made its presence known in East Haddam.
Bowdie is a one-of-a-kind charmer whose starring role in "Because of Winn Dixie" is something your not likely to forget for quite some time.

The actual musical, however, is somewhat problematic.
Not enough to land it gob and smack, on its face.
Not enough to wish you hadn't bought a ticket.
And not enough to make you wish Goodspeed was doing "My Fair Lady," "The Sound of Music" or "Annie" instead.
It's fun. It's adorable. It's sweet.
But at times, it just stops short, then picks itself up again, and starts anew.
And that's, o.k.
There's Bowdie and that's more than enough to make up for the musical's shortcomings. 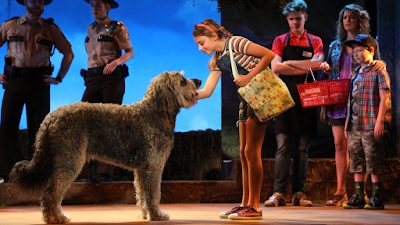 "Because of Winn Dixie" is being staged by John Rando whose directorial credits include "On the Town," "Damn Yankees," "The Royal Family of Broadway," "Urinetown," "The Sting" and Gentlemen Prefer Blondes." Working from Nell Benjamin's sugar-coated, uneven play script, Rando keeps the two-act musical on its toes for well over two hours, dramatically, comedically and musically and never once lets the two-act musical run out of energy. There are a lot of scene changes, which Rando masters magnificently with the help of the experienced, dedicated backstage Goodspeed Musicals crew. Individual scenes are played with proper angst, humor and cuteness without any gosh-oh-gee cliches or dumbness thrown in for extra measure. Shifts from dialogue to song are handled unobtrusively. Rando also wisely keeps Bowdie in the spotlight - and well, he should - much to the delight of everyone on stage and in the audience. 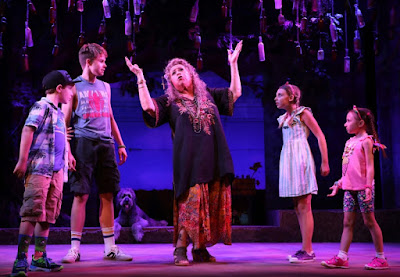 As devised by composer and lyricist, the score itself befits the "Winn Dixie" story, its progression, its drama, its comedy, its Florida setting and the various characters who stand proud and tall when they sing them. It's not in the same league as anything written by Sondheim, Webber or Kandler and Ebb. Nor is it as edgy or enticing as Sheik's "Spring Awakening," which, when compared to his work here, makes you wonder what was going through his mind when composing the score for this family musical. As best, the music for "Winn Dixie" is cute, sentimental, atmospheric and candy-coated. Still, there are times when the actual song list sounds and plays like a work in progress awaiting new and better material, cuts, changes, edits and reworks, and finally, something that cries "showstopper."

Serving as musical director, keyboardist and conductor, Adam Souza ("Next to Normal," "Rags," "Wicked," "Kinky Boots") surrounds himself with yet another exceptional orchestral team comprised of  Diane Orson (violin), Sal Ranniello (percussion), Karin Fagerburg (viola), Julie Ribchinsky (cello), Roy Wiseman (bass), Nick DiFabbio (guitar) and John Widgren (pedal steel guitar). Taking his cue from both Sheik and Benjamin, he brings pluck, grit, humor and sentimentality to the proceedings. Every one of the musical numbers is driven, tuneful and energetic and performed with just the right amount of actor/character showmanship by each and every member of the "Winn Dixie" cast. No one steps out of line. No one hits a false note. Under Souza's tutelage, harmonies are crisp and pitch perfect, solos and duets gallop along with the right musical pacing and ensemble numbers work their magic with enough musical detail to pique interest, if only fleetingly. Problem is, you want more. Lots more. But Souza is no miracle worker. He does what he can and he does it ever so well as "Winn Dixie" plunges forward to reach its overly cute, happy ending with canine star front and center to get the ovation-worthy applause he deserves from every hard-clapping member in the audience. 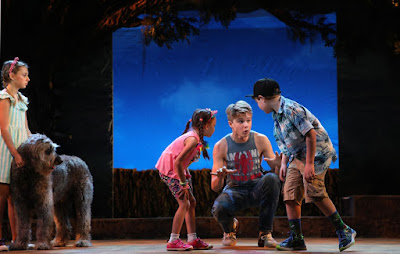 The two-act musical stars Josie Todd as Opal, J. Robert Spencer as Preacher, Isabel Keating as Frannie, Roz Ryan as Gloria, David Poe as Otis, Chloe Cheers as Amanda, Kacie Sheik as Jeanne, John Edwards as Carl, Brian Michael Hoffman as Jiggs, Nicole Powell as Millie, Jamie Mann as Dunlap, Sophia Mazza as Sweetie Pie, Crystal Kellogg as Callie and Jay Hendrix as Stevie. Everyone has his or her own say in the "Winn Dixie" story through song, conversation and dance. Under Rando's practical direction, no one misses a cue, no one hits a false note, no one upstages anyone and no one drifts in and out of character. To their credit, everyone is attuned to the mechanics of the story, its evolution, its twists and turns, its surprises and its very happy ending.

But in the long run, it's Bowdie you remember most.
He is the reason to see this musical.
He is the reason it shines.
He is reason you smile.
And finally, he is heart and soul of this sweet but odd little musical about a stray dog who becomes a young girl's very best friend. 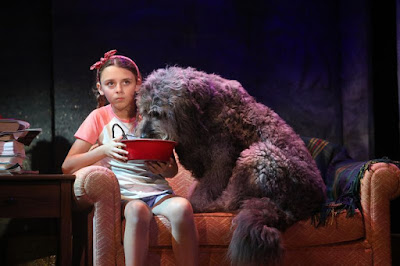 Photos of  "Because of Winn Dixie" courtesy of Diane Sobolewski

Posted by JimRuocco at 1:53 PM