From the Desk of Jim R, Take 2, Column 215, A Review: "American Son" (TheaterWorks/Hartford) 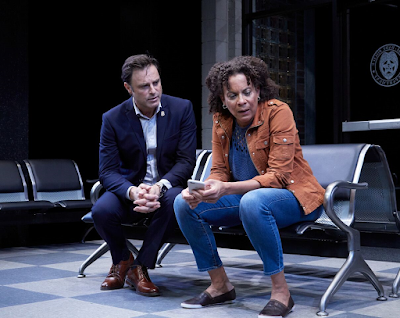 
What has happened to 18-year-old Jamal Connor?

As the house lights come up on this 100-minute, intermissionless play, a very fidgety Kendra Ellis-Conner is anxiously checking her mobile phone in an empty police station waiting room at 4 a.m. while outside it is raining and thundering with no sign of slowing down at any given moment. While texting and leaving messages for her son Jamal who took his car out the night before and failed to return home, she is trying hard not to panic about her son's obvious disappearance even when Paul Larkin, a clueless junior officer tries to comfort her without any knowledge or updates of what has happened or any explanation of what is really going on behind the scene's as the search for Jamal continues.

With the arrival of Jamal's father Scott, an F.B.I. agent who demands an immediate explanation, things get very out of hand until Lt. John Stokes makes an appearance and eventually faces the concerned couple, explains Jamal's whereabouts and reveals what actually did happen when the boy was finally pulled over by the police with two other passenger's in the car. It's an incident like no other. 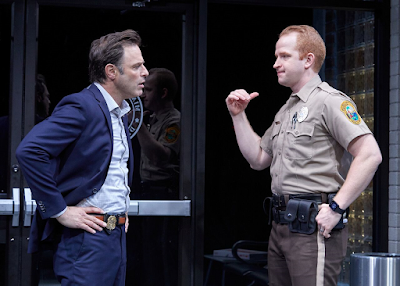 "American Son" is a sharp, intriguing, well-plotted play with satisfying twists, turns and surprises that spark and rattle in all directions that race productively toward an ending that is correct, draining and ultimately satisfying.

As written by Brown, the language, the conversations and the actual plot evolution are penned with a confident, detailed pacing and excitement that doesn't waver for a single second. Characters are accurately drawn with purpose, drive and determination. The dialogue is rich, bold and thought-provoking. There's also a well-orchestrated fluidity to the piece that is tight, dramatic and natural and never once over-bearing, forced or out of sync with the action and storytelling at hand. 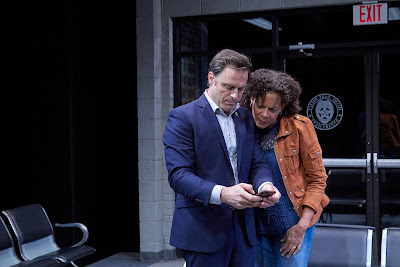 At TheaterWorks, "American Son" is being staged by Rob Ruggiero whose directorial credits include "Next to Normal," "Constellations," "Relativity," "Oliver!" "The Legend of Georgia McBride," "Looped," "Carousel," "The Understudy," "Take Me Out," "Big River," "Three Tall Women" and "Carousel." Here, as in other productions he has staged, creative skills are pretty much evident and dominant as he taps passionately into the playtext cleverly, realistically and inventively, crafting an emotional ride that is accomplished, connected, intense and very self-assured. As both director and storyteller, he knows when to take a breath, when to take a pause and when to let the material sit, stir, entice or completely shake you up when things get especially heated or completely out of control.

What's particularly impressive about Ruggiero's work in "American Son" is the way scene's connect and unspool with each of the four central characters when they converse, show up, exit and then reappear. The waiting room setting, the outside storm, the ongoing chaos and the uncertainty with only skeletal information delivered here and there allows Ruggiero to keep things edgy and crazed while waiting for the big reveal that ends the play. And when the balls drops - and drop it does- it's a actor-audience moment that Ruggiero delivers with stirring accuracy, pathos and shock as the stage lights slowly fade to black. 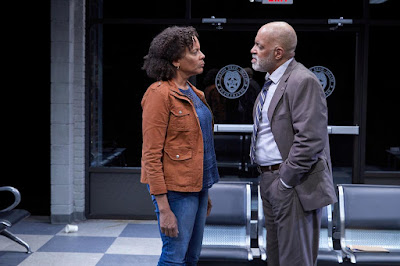 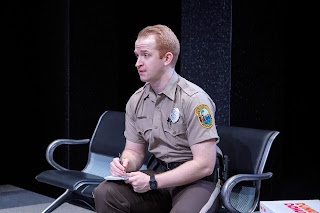 "American Son" stars Ami Brabson as Kendra Ellis-Connor, J. Anthony Crane as Scott Connor, John Ford-Dunker as Officer Paul Larkin and Michael Genet as Lt. John Stokes. Brabson, very passionate and moving throughout, is the real deal. She not only completely connects with the story and its emotionally awakening mindset, but allows you to experience everything she does, says and feels. The closeness of actor to audience heightens that intensity. In the role of Scott Connor, Crane tackles the play's racial, political and familial issues with the right spark and emotional concern the part calls for. He is also well matched opposite Brabson which makes their individual moments together real, raw and honest. As Officer Paul Larkin, Dunker's racial ignorance, doofy unkindness and by-the-book policeman persona is so believably rendered, you never doubt him for a moment. Genet, as Lt. John Stokes, shows up near the end of the play, but it's a character turn so compelling and painstakingly honest, it's well worth the wait.

"American Son" is an edgy, raw, dramatic piece of theatre fueled by silence, influence, simplicity, attitude and rage. Christopher Demos-Brown has written a play that gets under your skin, rips your heart in two and kicks you in the ass when you least expect it. Director Rob Ruggiero gets it right at every turn. And his cast of four play out every one of his practical, involved directorial moves in thrilling, unravelling, in-your-face fashion.

PS: This is the first production to be performed at TheaterWorks' newly renovated space. The new design is stunning and well worth the wait. It too is a class act like the theater itself. 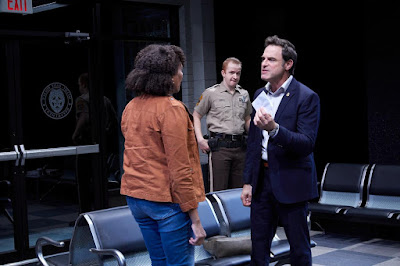