From the Desk of Jim R, Take 2, Column 216, A Review: "An American in Paris" (Westchester Broadway Theatre) 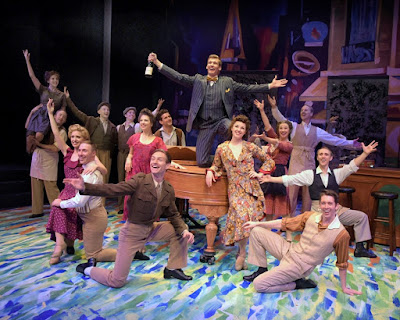 A dance in a musical is a thing of beauty. It inhabits the criss-cross between the choreography and the written text, whether sung or spoken. It enchants, cajoles, delights and entertains. It also exemplifies the extended expression of the libretto, its mood swings and transitions, its negotiated methods, its development of character and finally, the beauty and excitement-inducing spirit of the production itself.

In Westchester Broadway Theatre's "An American in Paris," a sumptuous, breathtaking presentation, which takes its cue, in part from the Oscar-winning 1951 MGM musical that starred Gene Kelly and Lesie Caron, it is the "piece de resistence" and "joie de vivre" of one of the most dreamy and lavish productions of the year. The transcendent beauty of the piece, mixed with the beguiling music of George and Ira Gershwin, makes it sing and soar with warmth and intimacy in every regard.

It is effortlessly structured and well played.
It is sweet and sentimental.
It is lighthearted and inspired.
It is sensuous and fancy-free.
It is rousing and frivolous.
It is bright, cheerful and thought-provoking.
Il se deroule egalement a Paris. 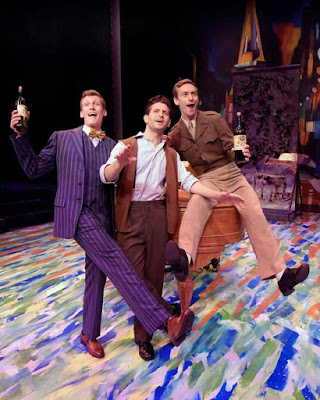 Set in Paris in 1945, the two-act musical pays homage to Toulouse-Lautrec, Montmarte, the Paris Opera, the Champs Elysees and the Place de la Concorde while revisiting the familiar plot line of five different men and women who pour their heart out through song and dance - an ex-G.I. looking for love; a promising Paris ballerina; a budding composer narrator; a wealthy blonde dilettante; a frustrated song-and-dance-man who might be homosexual - in the most romantic city in the world.

"An American in Paris" is being staged by Richard Stafford whose previous WBT directorial credits include "Saturday Night Fever," "Fiddler on the Roof," "Cats," "Show Boat," "Beauty and the Beast," Annie Get Your Gun," "Mary Poppins," "Guys and Dolls" and last season's rousing production of Cole Porter's "Anything Goes."  A keen, savvy,  intuitive director, he brings a vast knowledge and understanding of musical theater and MGM dance movie grandness to this production, which is utilized most effectively here. He is also an original auteur and storyteller who is always looking for new ways to shape and reinterpret the traditional, song-and-dance Broadway musical.

Here, his staging techniques, movements, maneuvers and positioning are rich, thrilling, colorful, inspired and enthusiastic. Everything he creates and shapes justifiably reflects the mechanics and methods of the "An American in Paris" book by Craig Lucas, its themes and reflections, its rhythmic progression, its musicality, it characters, its humor and its song-and-dance storytelling. Nothing is taken for granted. Nothing is too short or too long. Nothing is thrown in or overplayed. Nothing is out of place. Instead, Stafford keeps "An American In Paris" firmly rooted in the period from whence it came without any form of modernization. Every actor's move, gesture, position, mood swing, character tick, quirk, line delivery and song introduction is 1940's front, center, backwards and forward and in between. 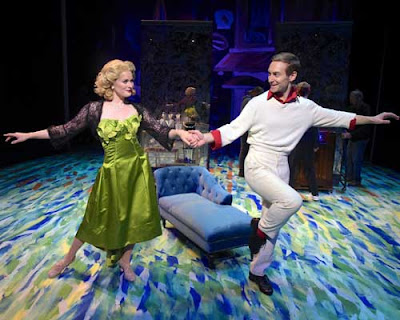 Elsewhere, Stafford knows exactly how to fully utilize Steve Lotfus' colorful, inviting Parisian set design and its vast, quick-changing scenes and settings to full advantage, thus, moving his actors about freely and fluidly without any form of hesitation, calculation or halts in any of the ongoing action. He also knows the story, the period, the music, the nostalgia, the jokes and the romance inside out and often gives his actors crafty, wonderfully timed bits of stagecraft and blocking which they toss off effortlessly. This, in turn, keeps "An American in Paris" in marvelous, high-spirited form that never wavers for a moment. Things are so expressive, natural and spontaneous, nothing that happens in this musical is ever questioned, candy-gooey or out of place for a single second. And therein, lies its celebrated allure and magic.

The musical score for "An American in Paris," written by George and Ira Gershwin, contains 16 musical numbers. They are "Concerto in F," "I've Got Rhythm," "Second Prelude," "I've Got Beginner's Luck," "The Man I Love," "Liza," "S' Wonderful," "Shall We Dance," "Second Rhapsody/Cuban Overture," "Fidgety Feet," "Who Cares?" "For You, For Me, For Evermore," "But Not For Me," "I'll Build a Stairway to Paradise," "An American in Paris" and "They Can't Take That Away From Me." The songs themselves, each and every one a showstopper, are nicely incorporated into the fabric of Craig Lucas' romantic story, its progression, its nostalgia and the various characters who sing them. The music itself unfolds naturally with the fizz and the pop of a vintage champagne on ice.

Given the vitality of the music and its hypnotic, breezy sound, musical director Ryan Edward Wise treats the popular Gershwin score with the reverence, joy, charm and sentimentality it demands. As "An American in Paris" segues from scene to scene, act to act and song to song, Wise, ever mindful of the great, ingenious musical score before him, emphasizes the extreme playfulness and social jest of George and Ira Gershwin's music and lyrics, its educated sprinkles, its rainbow-tinged moods, its urbane flavoring and its romanticized implications and mechanics. 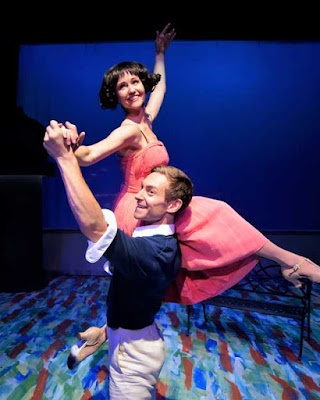 Careful attention is also paid to the lyrical pulse and drive of the music, its dreamy truths and pronouncements, its stylized wordplay and pathos, its deft phrasing, its chic and sassy insouciance, its distinct melodies and lastly, its sophisticated, swinging beats and rhythms. With Wise at the helm, with the able assist of his fine and talented musicians - Jim Briggs, Janice Aubrey, Bryan Uhl, Dave Dunaway, Tim Leonard, Steve Bleifuss, Jonathan Gleich, Jess Glover, Katie Von Braun, Simon Bilyk -  the "An American in Paris" orchestra is in full swing, never once missing  a beat or important song cue.  Everything that happens musically is tied into the actual structure of the piece quite seamlessly. No one sings just to sing. No one dances just to dance. This is not that kind of musical. It's all beautifully, timed, packaged, sealed and delivered.

Dancing is everything in a musical of this design and Stafford, doubling as choreographer, brings a sweet and pungent sense of humanity, dash and bubbly euphoria to the production that keeps it on its toes (no, pun intend) from start to finish. Since "An American in Paris" is presented in three-quarter staging, a wonderful conceit that thrusts everything that happens on the WBT stage out before its audience in 3-D brilliance, Stafford is able to expand, reinvent and design more intricate, more daring and more fluid dance choreography that not only gives the musical a well-honed actor-audience intimacy, but allows it to snap, crackle, pop and resonate with decided purpose and relish. 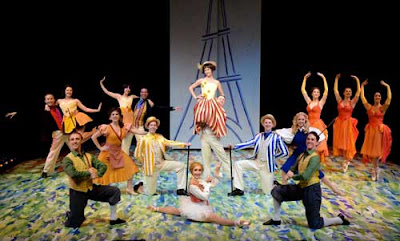 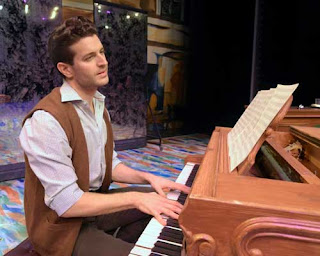 Bringing the dances of the story to life, he makes the right, appropriate choices in terms of style, mood, movement and dance tableaux, matched by plenty of electricity, attitude, sizzle, froth and glamour. When necessary, the dances reflective in certain musical numbers are slightly extended to not only showcase the talents of certain principals and ensemble members, but to provide additional shading, purpose and dimension. As with last year's "Anything Goes," he also adds some well-timed dance bits and playfulness to many of the scene changes, which, is not only effective, but keeps the flavorful buoyancy of ""An American in Paris" in full swing.

The two-act musical stars Brandon Haagenson as Jerry, Deanna Doyle as Lise, Tommasco Antico as Adam, Lauren Sprague as Milo and Jonathan Young as Henri. Everyone is perfectly cast for their  musical song-and-dance roles, which they deliver most engagingly using the right mindset and personality for the romanticism, mischief, attitude, charm and pulse dictated by the material at hand. Vocally, they are in perfect unison, singing alone, in duets or with the ensemble, smartly mastering the melodic drive, pulse and heartbeat of the kinetic George and Ira Gershwin musical score. As dancers, they are poised, confident and driven, gazing into each other's eyes, holding one another ever so closely or working together as an ensemble, completely in sync with the authenticity of the piece, the period and its postwar European atmosphere.

"An American in Paris" is a fitting conclusion to Westchester Broadway Theatre's invigorating 2019 season of musicals that included " "Newsies," "Ain't Misbehavin' " and "On Your Feet." It is a dazzling, dreamy and romantic inspired entertainment  brimming with admirable clarity, froth, cheekiness and playful savior faire. The plot is irresistible and adorable and played with appropriate romanticism and warmth by the WBT cast who easily succumb to its bygone era of charm and merriment. The George and Ira Gershwin songs are smart, savvy, wicked and marvelously inspired. The cast, all in fine voice, nail every single one of the musical numbers with absolute style and sublimity. Richard Stafford's cinematic-styled direction and choreography unfolds in glorious 1940's  Technicolor. And Ryan Edward Wise's splendid musical direction is proof positive that everyone onstage and off loves a George and Ira Gershwin show tune mixed with a splash and dash of grace, elegance, boldness and verve. 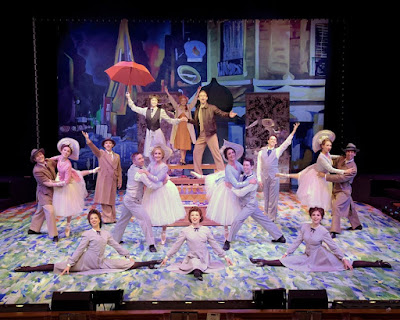 Photos of "An American in Paris" courtesy of John Vecchiolla


"An American in Paris" is being staged at Westchester Broadway Theatre (1 Broadway Plaza, Elmsford, N.Y.), now through November 24.
For tickets or more information, call (914) 592-2222.
website: broadwaytheatre.com
Posted by JimRuocco at 9:46 PM