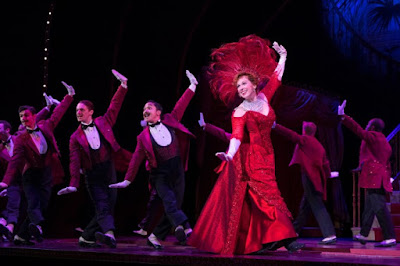 It's everything you'd expect and so much more.
It's luminous and crafty.
It's bright and bouncy.
It's frivolous and snappy.
It's sinfully sweet and ice-cream shop flavorful.
It's a welcome return to the heyday of the big, old-fashioned Broadway musical.
It's a colorful journey back in time to the Victorian world of late 19th century America.
It sparkles and illuminates.
It sings and dances with the feel-good vitality and chutzpah it is famous for.
It has the winning charm of a long lost friend reunited.
It's a delightful uplift and spit-spot sugar rush.
And finally, it's just what the world needs right now.

That said, there's also something magically dreamlike and wistful about "Hello, Dolly!" the Tony Award-winning Broadway musical that kicks romance, legend, courting and first love into high gear with an embodied sentiment and engagement that's as grand and extraordinary as this musical take on Thornton Wilder's "The Matchmaker" was meant to be. On tour through May, 2020, this elegant, freshly minted touring edition of the hit Jerry Herman musical (the first tour ended its run at Boston's Opera House on August 25) is brand-spanking new (it officially kicked off September 24 at the Starlight Theatre in Kansas City, Missouri), carrying with it a shine, pulse and glimmer that passionately reflects its flush and bloom, the excitement of a new cast headed by Carolee Carmello and John Bolton and a storytelling bravado that twinkles and delights in high-stepping, energetic fashion. 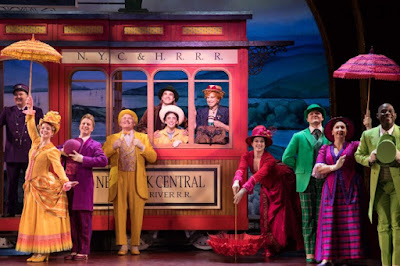 Taking its cue from Wilder's original story, the musical, penned by Michael Stewart, travels the same route as the original 1954 play. As "Hello, Dolly!" opens, matchmaker Dolly Gallagher Levi takes the train to Yonkers to find a suitable partner for Horace Vandergelder, an esteemed, half-a-millionaire looking to remarry. She, of course, plans on marrying Vandergelder herself. But before she sets her plan (i.e., trap) in motion, she travels back to New York accompanied by Vandergelder's sniveling niece Ermengarde, her intended suitor Ambrose Kemper and two of Vandergelder's Hay and Feed Store employees Cornelius Hackl and Barnaby Tucker with promises of adventure, money, romance, fancy dinners and sightseeing. Upon arrival, she fixes up Vandergelder's hapless, lovesick clerks with Irene Malloy, the attractive hat shop owner he has been officially courting (Dolly, of course, arranged the match) and giggly Minnie Fay, her shop assistant, who, like Hackl and Tucker, is just as inexperienced when it comes to good, old-fashioned love and romance.

Not to worry, though.
Through song, dance, dialogue, comedy, drama and cotton candy goodness, things end up on a very high note.
Dolly gets Vandergelder. Cornelius and Barnaby become merrily entwined with Irene and Minnie. And Ermengarde and Ambrose live happily ever after. 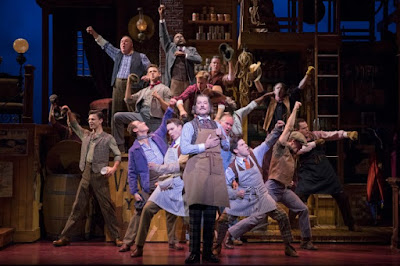 This glorious revival is being staged by Jerry Zaks who directed the 2017 production and the subsequent 2018-2019 first national tour that starred the extraordinary Betty Buckley in the lead role of Dolly Levi, a part she played and inhabited in the most amazing of ways using a polished spin and luster that gave the musical its heart, its soul, its passion and its sweet-natured intimacy and sparkle. Back in the director's chair for the 2019-2020 second touring edition of  "Hello, Dolly," Zaks
leads his new cast to victory using the same bubbly charm, earnestness and comic shuffle he brought to the previous two productions, firmly rooted in the classic spectacle, the comforting embracement and the harmonic complexity the show is famous for.

As director, Zaks pulls out all the stops and punches with a flair and flourish of fresh paint and vigor that is pure tonic for both everyone on stage and in the audience. This is "Hello, Dolly!" for a 21st century audience. Not a postcard replica or imitation of the "Dolly" of yesteryear. Nor it is an homage to the leading ladies of the past who gave it life - Carol Channing, Ginger Rogers, Pearl Bailey, Betty Grable, Ethel Merman, among them. Instead, it is reinvented and reworked by Zaks with a savvy mentality and repositioned grin and consciousness that incorporates many elements of Thornton Wilder's "The Matchmaker" back into the framework of the story, thus, breaking new ground for the characters, the original Michael Stewart book and its scene-by-scene conversational and musical evolution. It's funnier. It's tighter. It pulsates with enthusiasm and relevance. It's feel-good factor is truly uplifting. It doesn't waste a single breath, emotion, dance step or lyric. With Zaks pulling the strings, it is also fresh, lush and every inch what you'd expect from an epic Broadway musical with a very colorful past and much-ballyhooed history. 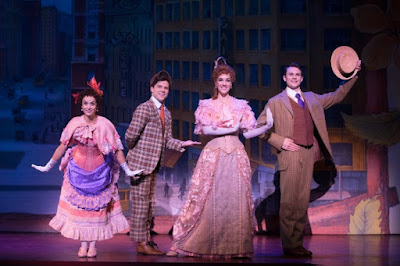 With music and lyrics by Jerry Herman, the celebrated musical score for "Hello, Dolly!" features 17 original musical numbers reflective of the 1890's period of the show's setting and the blueprint set forth by Thornton Wilder in his 1954 play "The Matchmaker," which is the basis for the two-act musical. They are: "I Put My Hand In," "It Takes a Woman," "Put on Your Sunday Clothes," "Ribbons Down My Back," "Motherhood," "Dancing," "Before the Parade Passes By," "Penny in My Pocket," "Elegance," "The Waiter's Gallop," "Hello, Dolly!" "The Contest," "It Only Takes a Moment," "So Long Dearie," "Hello, Dolly! (Reprise)" and "Finale."

As penned by Herman, the songs for "Hello, Dolly!" - a richly textured patchwork of clean, pure melodies chock full of loud, proud, clear emotions and full-hearted optimism -  bristle with the familiar snap, crack, flavor and pop the composer/lyricist is famous for. They are creative, sunny and lyrical with an ever-pleasing sound that is moving, simplistic, romantic and invigorating. It's all very much inspired for the characters who sing them - leads, supporting characters and ensemble - and fits harmoniously into the framework of the story, its evolution, its very happy ending. Horace Vandergelder's big solo number "Penny in My Pocket," which was composed exclusively for David Burns in the original 1964 Broadway production but cut for time purposes, has been restored to its rightful place at the opening of Act II (the 2017 Broadway revival used it first), where it kicks the story into high gear with its musical freshness, comic gaiety and lyrical verve. 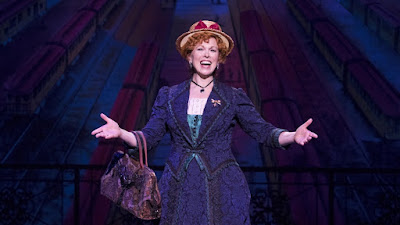 Throughout "Hello, Dolly!" Herman's lyrics - witty, pungent, driven, sweet, intricate -  mixed seamlessly with the composer's effervescent, unpretentious, tuneful music, give the production its sonic, rhythmic musicality. Musical director Ben Whiteley and his tremendously talented orchestral team tackle the popular musical score with the breezy, persuasive and expressive swagger and lilt it demands, offset by a mercurial freshness and melancholy mixed with a vibrant energy, zest and love in every bar. Even if you've heard the music of  "Hello, Dolly!" before, it doesn't really matter. Whiteley and company make it sound, brand-spanking new. It's a partnership that is bold and bright with an alertness and impulse that reflects the sounds, textures and tonality set forth by Herman. The playing itself is dispatched in spectacular fashion. It glides and soars. It is super confident and joyous. It is honeyed and stirring. There's so much to savor in Whiteley's articulation and dynamic, you eagerly go along for the ride, enjoying every single moment - "Put on Your Sunday Clothes," "Hello, Dolly!" "Before the Parade Passes By," "It Only Takes a Moment," to name a few - while humming along quietly as the entire "Hello, Dolly!"  cast - all enthusiastic and in very fine voice - delight and cajole as the two-act musical whirls and twirls toward it's cheery, cheeky, much-anticipated happy ending. 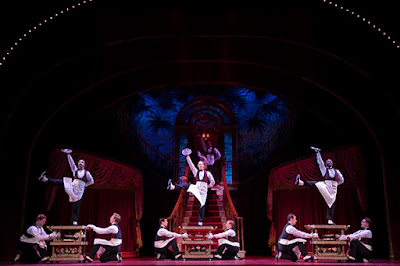 Much of the success of any big stage musical hinges on the choreography and "Hello, Dolly!" flies through the starting gate with lively, kinetic, harnessed dancing that is chock full of imagination, charm, lift and manner that mixes theatricality, color and late 19th century mindset with comfort, thrill and oozing confidence. As shaped by Warren Carlyle who helmed the choreographic wonderment of the 2017 Broadway edition, it dazzles and pops, bounces and soars and whiz-bangs and delights in the most resonant and magical ways an audience could wish for.

From one big musical number to the next, Carlyle raises the roof, so to speak, using the simplicity and gusto reflective, in part, of the original dance work of Gower Champion, mixed with the "flash-bang-wallop, what a picture, what a photograph" nostalgia of  London's "Half a Sixpence" and a reawakened, Victorian pop-up-book stylization and class-conscious period shimmer that serves the material well as it glimmers and shines with tour de force validity and perspective. Not one to rest on his laurels, Carlyle also adds much more dancing and invigorating movement to many of the production numbers using reworked and extended orchestrations that are aesthetically pleasing, transformative and interpreted with playful dashes of bright sunshine, fully committed artistry and high-packed kicks, hops and flutter that snap into place effortlessly. 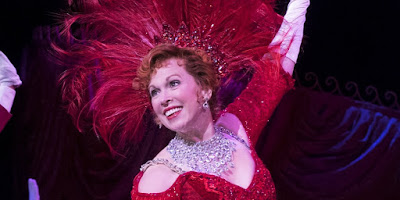 It's a role she was born to play and play it she does. As Dolly Gallagher Levi, Carolee Carmello offers her own personal spin on the much-loved character, offering a showstopping performance that is very different in style and tone from others who have played the part before her. She's a class act with one of the most beautiful voices ever who takes hold of the material and moves from scene to scene and song to song with the confidence, charm, polish and gait of a Broadway leading lady whose star burns bright from the moment she steps on stage right on through the final curtain call.  She bristles. She shines, She pops. She sparkles. She enthralls. She makes the part her own and never lets go.

John Bolton is the right and proper fit for the blustery, chauvinistic Horace Vandergelder who wants a wife "all powered and pink" and ends up with the forceful but loveable matchmaker Dolly Gallagher Levi instead. His vaudevillian charm, quick-mannered comic timing and confident embracement of  the "Hello, Dolly!" play text wins us over immediately as does his hilarious and joyous rendition of "Penny in My Pocket" at the start of Act II. As Horace Vandergelder's perplexed and tyrannized Hay and Feed Store clerks Barnaby Tucker and Cornelius Hackl, Sean Burns and Daniel Beeman cut loose with dance moves that dazzle, snap and pop, comedy shtick that is ripe and cleverly orchestrated and pitch-perfect singing that comes straight from the heart. They are so charismatic and engaging, one eagerly their every entrance. 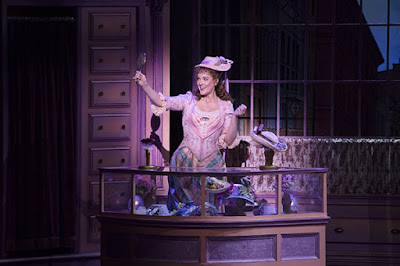 Analisa Leaming, in the role of the beautiful New York City milliner Irene Malloy is completely captivating in a part well suited for her splendid acting and vocal talents. As "Hello Dolly!" evolves, she deftly projects the girlish glee and Victorian refinement associated with her character. As Minnie Fay, Chelsea Cree Groen is zany, sweet, bubbly, giggly and featherweight, which is exactly what the past calls for. In the roles of Ambrose Kemper and Ermengarde, the tremendously talented Laura Sky Herman and Colin LeMoine are ideally matched as a very cute 19th century couple who love to sing, love to dance and love to interact with just about everyone else on stage.

Energetic, irresistible and completely high-spirited, the national touring company of "Hello Dolly!" amazes at ever single turn. Everything about it is on fire from Carolee Carmello's showstopping turn as Dolly Gallagher Levi to Jerry Herman's infectious musical score, the dancing, the candy-coated sets and costumes designed by Santo Loquasto and every single person who steps forth on the grand, welcoming Bushnell stage to reenact the playful nostalgia and merriment of this high-stepping old fashioned musical. Watching it unfold in glorious vintage Technicolor, its charm and newness is so engaging, you wish it would never end. That said, it's not only nice to have Dolly back in town, but this is one of those musicals where you wish there was a "Replay" button that you could hit immediately after the final curtain call and watch the whole thing all over again. You won't be alone...not by a long shot. 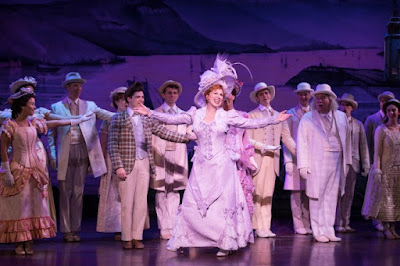