From the Desk of Jim R, Take 2, Column 217, A Review: "American Idiot" (Brookfield Theatre for the Arts) 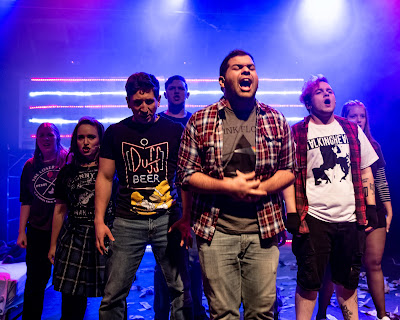 
"I jerked off into oblivion last night and today I forgot to shower, again. Oh, well. It doesn't matter, because I'm just gonna meet up with Will and Tunny and the usual suspects again for another afternoon of shit talkin,' cigarettes and blah, fucking blah."
Johnny, Will, Tunny ("American Idiot")


In "American Idiot," the 2010 musical adapted from Green Day's 2004 album of the same name, the characters who populate the punk culture represented in the show are all on edge complaining and bitching noisily about conservative media, the Presidency, the lack of challenges, family miscommunication, the war in Irac, heroin abuse, self-destruction, mood disorders, broken dreams and so much more.

The list goes on and on.
Then again, that's the point of this significant, scream-heavy opus where voices are raised in song selling the emotional angst, heartache and attitude of the songs they are asked to sing, backed by a six-member band who keep the sound and energy of the story as pumped-up and vibrant as the show's creators (Green Day, Billy Joe Armstrong, Michael Mayer) allow.

The story is simple enough. Three suburban best friends - Johnny, Tunny, Will - anxiously try to move forward through post-9/11 America. One finds comfort through drugs, women and hot raw sex in the big city. Another heads off to war. A third struggles to support a wife and a newborn baby. 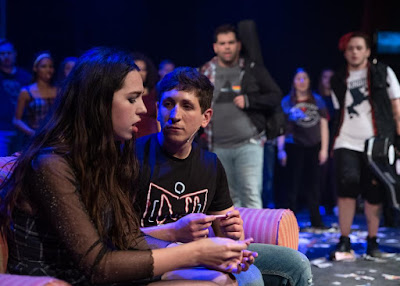 What follows is a fast and furious portrait of tortured misfits, wasted youth, beleaguered friends and crazed slackers who emulate Green Day's pleasurable, raucous, fuck-you-protest punk music with all the rage, love and wonder this 90-minute, full-tilt, thrill ride has to offer.

The newly minted Brookfield Theatre For the Arts presentation of "American Idiot" gets it right at every turn.


It engages its audience.
It runs on pure adrenaline.
It breaks you in two.
It haunts and stifles.
It celebrates and rejoices.
It is punk rebellion of the wildest kind.


Beth Bonnabeau, last seen as Miss Mona in Brookfield Theatre for the Arts' summer presentation of "The Best Little Whorehouse in Texas," has the right mindset, attitude and directorial sheen necessary for "American Idiot" to work. As director, she brings extraordinary depth to the material, an amazing sense of balance and nuance and a well-suited reality that makes everything that happens on stage look solid and sloshing, contained and vitriolic and wonderfully heart-shedding with a dash or two of retro sideshow Bohemia thrown in for extra measure. 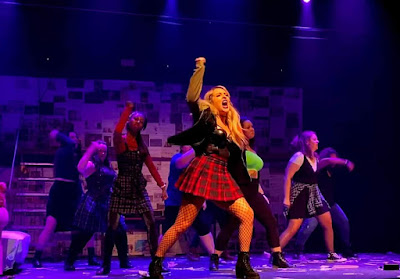 Given the musical's themes of anarchy, rebellion, disillusionment, substance abuse and sexual freedom, Bonnabeau handles these issues and more with a directness and passion that is completely in sync with Green Day's concept for the music, its narrative thrust and its in-your-face promiscuity.
She doesn't hold back either, a conceit that creates some blatant, well-orchestrated moments that burst with imagination and wild abandon. Directorially, she keeps her energetic cast in constant motion, using very creative movement, staging and blocking that enhances the mood and feel of "American Idiot." She handles the intimate Broofield Theatre space well creating some impressive 3-D visuals reminiscent of "Rent," "Hair" and "Spring Awakening." She also knows when to strike a pause, when to take a breath, when and where to move the audience's eye through the ongoing action and when to let things pop, snap and resonate.

"American Idiot" comes packaged with 31 individual songs, written by American punk rock band Green Day (music) and the band's lead vocalist Billy Joe Armstrong (lyrics). They are: "American Idiot," "Jesus of Suburbia," "City of the Damned," "I Don't Care," "Dearly Beloved," "Tales of Another Broken Home," "Holiday," "Boulevard of Broken Dreams," "Favorite Son," "Are We the Waiting," "St. Jimmy," "Give Me Novocaine," "Last of the American Girls/She's a Rebel," "Last Night on Earth," "Too Much Too Soon," "Before the Lobotomy," "Extraordinary Girl," "Before the Lobotomy (Reprise)," "When It's Time," "Know Your Enemy," "21 Guns," "Letterbomb," "Wake Me Up When September Ends," "The Death of St. Jimmy," "East 12th St," "Nobody Likes You," "Rock and Roll Girlfriend," "We're Coming Home," "Whatsername," "Good Riddance." 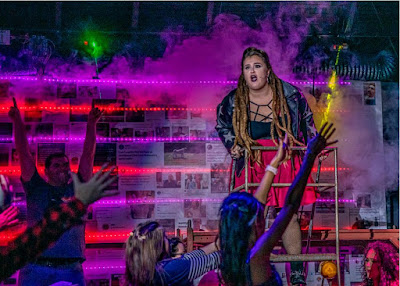 Politically charged with primal anger, mind-fuck summarizing and tough, punkish balladry, the music for "American Idiot" is pretty hardcore stuff that's insightful, ballsy, bratty and undeniably tuneful.
Reconceived for the stage, it's all pretty relevant and inspirational in terms of storytelling, who sings what, who is scarred and confused, who vibes with his or her set of problems, who feels like an outsider, who is fighting for equality, who's anxious to free themselves from political bashing, who's desperate for a better future and who comes to terms with his or her own life before the final fadeout.

For this production, Adam Snyder serves as musical director and keyboardist with the orchestral assistance of Peter Gialo (bass), Sarah Fay (keyboard), Andrew O' Farrell (guitar) and Christian Peragine (drums). Snyder keeps everything in fluid motion, establishing "American Idiot's" own musical universe. Totally involved in the thrill of music making with an edge, he translates the musical's angst, rage, rebellion and fantasia with plenty of energy and flair. And through it all, the band's playing is alert, spontaneous and involving.

The loud, proud sound of the music beckons dance - kinetically entertaining dance that is cutting edge, dramatically mesmerizing and plot advancing. Alicia Dempster, as choreographer, defines that conceit throughout "America Idiot" with breakthrough choreography that reflects the angst, ache, sizzle, mystery and slacker-snarl of the songs themselves. Like others before her, she pushes the envelope with punkish solidarity, funky-locking moves and maneuvers and inspired synchronization propelled by a rapid urgency that is full of brains, stagecraft and visual addiction. Bodies move in compelling, uplifting and satisfying ways, but no two numbers are alike. Dempster's world is not only deep, mad and metaphoric, but bathed in originality and inspiration that is all very satisfying to watch. 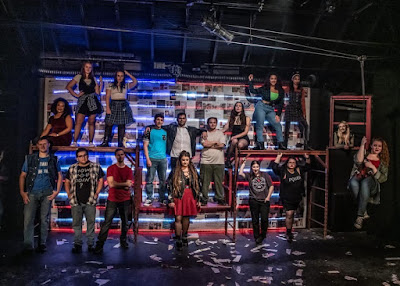 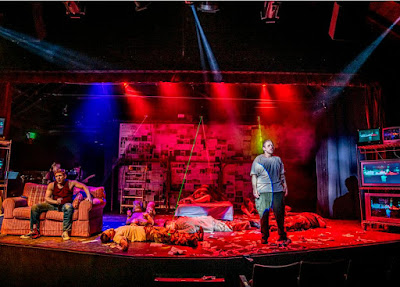 The two act-musical stars David Anctil as Johnny, Mason Sacco as Tunny, Noah Leibowitz as Will, Ruby White as Heather, Jami Valzania as St. Jimmy, Anna Hicks as Whatsername, Jared Reynolds as Favorite Son, Carly Phypers as Extraordinary Girl, Phil DeHuff as Phil, Kate Patton as Kate, Elizeth Brito as Eli, Sabine Dempster as Sabine, Sarah Denn as Sarah, Jasmin Love Salas as Jasmin, Matthew MacGregor as Matt, Amanda Highley as Amanda  and Faith Fernandes as Faith. All of the actors do a remarkable job of holding the plot together. They are top-notch vocalists who nail Green Day's anthemic sound with bold, intuitive, pointed musicality. They inhabit the personality and mind games of their characters with raw, confident showmanship. They lose themselves completely in the stage madness concocted by Bonnabeau, Dempster and Mayer. They shout "What the fuck?" and "Motherfucker!" repeatedly with glazed accuracy and enthusiasm. They also "get" the concept and mindset of "American Idiot," how it is to be acted and played, why it exists and how several of the main characters spiral out of control before "Good Riddance," the final number, finishes the show in perfect, soaring harmony.


"All I want you to understand. That when I take your hand, it's cause I want to. We are all born in a world of doubt. But there's no doubt. I figured it out."
Johnny ("American Idiot") 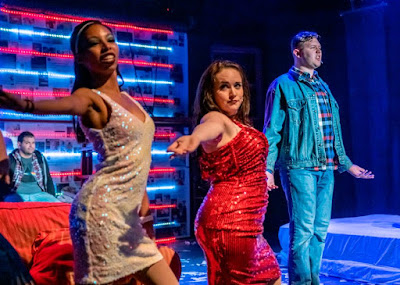 Technically, the rock opera that is "American Idiot" explodes in gig-like, concert style. This adrenaline rush is the collaborative effort of lighting/ special effects designer Stephen Dempster, the set design team of Steve Cihanek and Andrew Okell, sound designer Lou Okell and costumers Jami Valzania, Lou Okell and the cast themselves. All of them give the show its Green Day heartbeat, its bold, punkish look and its individualistic style and expressionism.

Rebellious, wild, thrilling and powerful, "American Idiot" ramps up the volume blasting through Green Day's concept album of songs with constant angst, screams and craziness that deserves to be heard. Its political protests and discourse hits hard. Its breakneck pace is exhilarating and 100mph punkish. The cast who populate the show's mad, live wire utopia bring the right dramatic edge and punch to Green Day's amped-up hit parade. And the closeness of actor to audience gives this incarnation of "American Idiot" a feverish pitch like no other.


"American Idiot" is being staged at Brookfield Theatre for the Arts (184 Whisconier Rd., Brookfield, CT), now through November 23.
For tickets or more information, please call (203) 775-0023.
website: brookfieldtheatre.org
Posted by JimRuocco at 1:12 PM