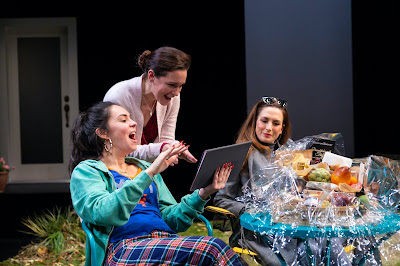 "You have no idea what you're getting into when you have a kid. You have no idea it's going to crack you life open, it's gonna crack your identity open, it cracks your marriage open, and in my case, it actually physically cracked me open."
(Molly Smith Metzler, Playwright, "Cry It Out")

Learning how to be a mother of a newborn baby without first hand experience is just one of the many topics addressed in "Cry It Out," Mary Smith Metzler's complex, significant play about choices, worrying, anxiety, options, common errors, breastfeeding, sleepless nights, depression, isolation, financial troubles, childcare issues, societal pressure and so more more.

The list goes on and on.
Some questions are answered. Some are not.
The possibilities, however, are endless and that is the point of this moving, edgy, acerbic take on motherhood, its experiences and its day-to-day challenges.

At Hartford Stage, director Rachel Alderman's handsome, deftly crafted production of  "Cry It Out" plunges you headfirst into the playwright's weighty storytelling as its cast of four -  Evelyn Spahr as Lina, Rachel Spencer Hewitt as Jessie, Caroline Kinsolving as Adrienne and Erin Gann as Mitchell - take hold of the material, play it for all its worth and invest each of their roles with a natural, polyphonic richness that gets under your skin, rattles your senses, makes you uncomfortable, breaks your heart in two and leaves you emotionally drained when the cynicism, angst, shock, surprise and familiarity of the conversations are dialed down right before the final fadeout. 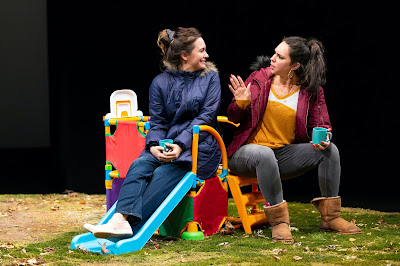 "Cry It Out" is addictively watchable entertainment with a vital spark and commanding voice of quivering intensity that offers fertile ground for interpretation by both director and playwright who startle and taunt, tease and cajole and reflect and argue about the highs and lows of 21st century motherhood. The 90-minute play, performed without an intermission, unfolds through such fresh eyes, it's impossible to look away for a single second for fear of missing something important to the story's telling and progression.

The title itself refers to sleep training methods that allow babies to shed tears and make a fuss for a set period of time before any parent intervention. The goal, of course, is to teach the infant to self-soothe and eventually drift off to sleep. It does not require a parent to allow their baby to cry out all night long without some degree of comfort, action and attention.

As playwright and storyteller, Metzler offers her audience a fast and fluid serio-comic work that is direct, humorous and mind-bending, offset by lots of irony, prickly wit, sentiment and structural involvement. There's also plenty of satisfying innuendo here, peppered with straight-referenced facts, themes, connections, punchlines, four-letter words, infiltrating language and modernistic discoveries and outbursts that make everything that happens in "Cry It Out" upfront and connected without the slightest form of calculation. 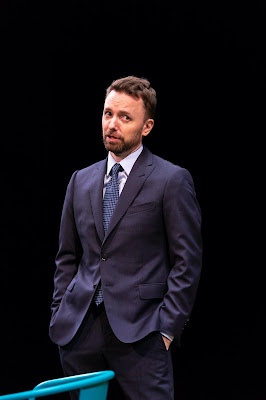 Staging "Cry It Out," director Rachel Alderman knows exactly what she wants, how to play a certain moment, when to take a breath, how to interpret each page of dialogue, when to amp things up and when to power them down for a moment or two of silence. As "Cry It Out" evolves, she gives authentic voice to Metzler's conversations, characters, themes, undercurrents, explorations, conflicts and repercussions.  Here, everything that happens is articulated with such purpose, authenticity and conviction, you often forget that you are sitting in a theater watching a play. The actual voyeuristic arrangement of actor to audience is so uniquely felt under Alderman's tutelage, it often heightens "Cry It Out's" dramatic and comic momentum, its scene-by-scene rota and its overall enjoyment.

In the role of Jessie, a corporate lawyer on a leave of absence from work and fully engaged in new found motherhood,  Rachel Spencer Hewitt delivers a raw, intuitive, sensitive portrayal of a woman grappling with baby monitors, child-rearing chaos, late night feedings, anxiety, insecurity, organizational planning and various domestic challenges that keep her character hopping from early morning till midnight. Asked to portray a variety of emotions, mood swings and character turns, the actress is a natural fit for the part, which she plays with amazing truthfulness, authenticity and realness. 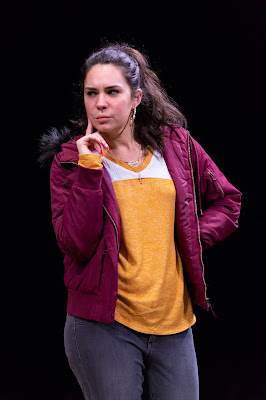 It's a role she was born to play and play it she does. As the wisecracking, foul-mouthed Lina, a terribly unsophisticated and ballsy South Shore mother who immediately bonds with her loving neighbor Jessie,  Evelyn Spahr inhabits the part so convincingly, there's no mistaking her character's background, personality and mindset for a single second.  She is always switched on, listening, moving, reacting or reciting Meltzer's dialogue with pleasurable accuracy and ferocious passion.

Erin Gann plays the part of Mitchell, a wealthy business entrepreneur who often spies on Jessie and Lina through his telescope, with the right compassion, honesty, shyness, confusion and awkwardness the part calls for, which, in turn, adds the right rhythm and honesty to his deft portrayal of a man troubled by his wife's lack of interest and concern with their newborn baby. 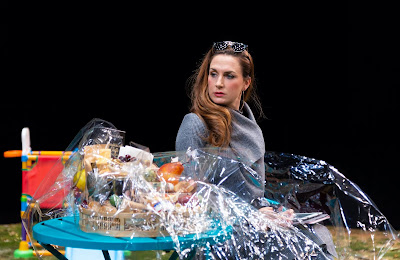 Caroline Kinsolving, as Mitchell's beautiful, self-absorbed wife Adrienne, a successful jewelry designer in her own right, drips disdain, rudeness, obnoxiousness  and contempt so effectively from her very first entrance to her last, you wonder why the hell he married her, why he is still living with her and why he asked Lina and Jessie to make her a part of their outdoor morning and afternoon coffee routines. That said, it's a strong, confident performance layered with plenty of fire and fury until the ball drops and the character reveals an anguished back story designed to reduce you to tears.

"Cry It Out" is a candid, intimate piece of theater that surprises and illuminates with remarkable clarity and vision. A psychological fantasia about four very different people, it is a remarkable new work that speaks to its audience through intimate, revealing conversations that are truthful, profound, disturbing, acerbic and surprisingly cogent. With its sweeps of simple choreographed movement by director Rachel Alderman, it draws you into the action immediately and keeps you riveted for its full ninety minutes. This is the kind of theatre that Hartford Stage does best and the end result is truly electrifying. 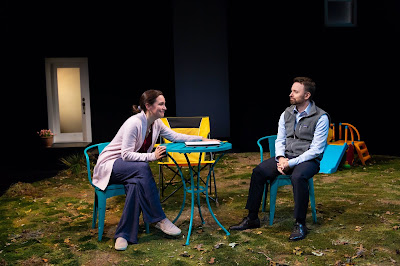 Photos of "Cry It Out" courtesy of T. Charles Erickson