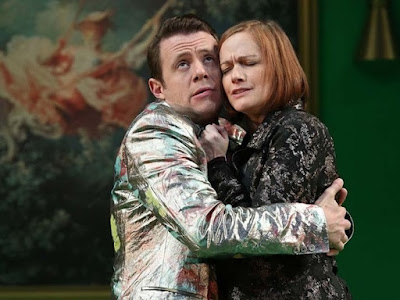 As reinvented by playwright Brendan Pelsue, there's a fleet-footed charm and rangy cleverness to his modern day telling of Moliere's 1665 play "Don Juan" that's ironic, sleazy, frantic and fearless. In every way, it's off-the-cuff entertainment, crazily amped up with oozes of hysterical slapstick, tottering spliff, mounting pranks, blustery condemnation and several what-the-hell-was-that kind of moment's that include Don Juan's manservant Sganarelle wiping his master's ass (thrusted right up in the air for a thorough cleaning) after defecation in the bathroom.

Nonetheless, the character of Don Juan is still a feckless womanizer obsessed with the taste of female flesh. He's also decadent, narcissistic, privileged, complicated, liberated and oddly detached in much the same manner as first portrayed in the original work by the great Jean-Baptiste Moliere. Old school ideas also meet new ideas this time round when Don Juan finds himself lip-locked with a very attractive man in the woods. No sex, mind you, just a very hot, wet kiss, meant to shock, titillate or surprise, depending on one's sexual lifestyle, orientation or beliefs. 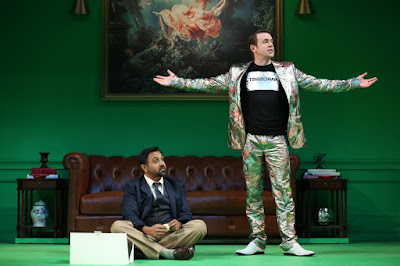 Pelsue's fascination with the title character and his wild romantic misadventures is cunningly usurped in Westport Country Playhouse's rampant telling of "Don Juan," which sizzles with wicked glee, shameless exploitation and open-mouthed sensationalism. This "Don Juan" is imaginatively wired and radical. It is savage and hilariously disgraceful. It is well-heeled and oiled. It is also tawdry, out there with the stars and planets and very much in the moment.

The two-act comedy chronicles the last two days in the life of Don Juan, an atheist and libertine who mocks the Church and in the end, is taken into Hell by the living statue of the man killed in a duel. But before he meets his untimely doom, he is accompanied on his daily adventures by his trusty valet Sganarelle, a superstitious, cowardly fellow who stands by his master's side and playfully engages in the conversations, debates, power plays and craziness set forth by the masterly, oversexed courtier.

Orignally performed at the Theatre du Palais-Royal on February 15, 1665 with Moliere playing the past of Sganarelle, "Don Juan," written in prose, was quickly withdrawn from public performance following a two-week run after attacks by the playwright's critics who claimed the production offended religion and the king by eulogizing a libertine. It was critical and costly failure. 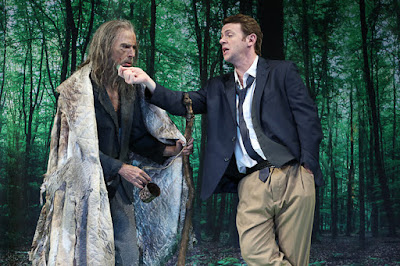 In Westport, "Don Juan" is being staged by David Kennedy whose directorial credits include "The Understudy," "The Invisible Hand," "Tartuffe," "Suddenly Last Summer," "Appropriate" and "Loot." A savvy director and storyteller, Kennedy is keenly attuned to Moliere's commedia dell-arte influences, his social satire principals and decorum, his barbed sarcasm against the Church, the hypocrisies of his thoroughly messed up characters and the playwright's love of language. That said, he crafts a perfectly valid theatrical piece that offers a radical new take on Moliere's "Don Juan" and comes across loud and clear with nothing on its mind except to provoke, entertain and slap you in the face once or twice.
As "Don Juan" evolves, Kennedy ventilates the new version's story conceit with appropriate awareness, pampered idiocy, giddy jumbling, brash gobbledygook and glorious sexuality. Despite the play's modernism, this is still recognizably Moliere in all its plot contrivances, stances, paces, religious hypocrisies and character developments. It dances to its own drum beat. It teases and taunts. It manipulates and stirs. It rips and roars. It jokes and shocks. It gets under your skins and tosses you about like a scorned lover. 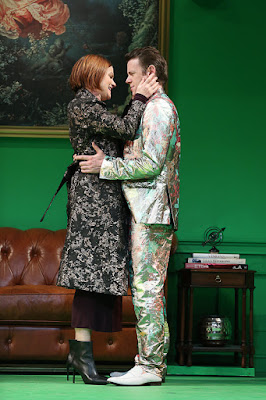 With comedy as the main focal point, pacing - the right kind of pacing - is mandatory in order for "Don Juan" to take shape, cast its spell and work its magic. Without it, the play would come to a crashing halt.  A clever manipulator of sorts, Kennedy never lets that happen. He brings his own rhythmic beat to the production. He knows how to play comedy and he plays it well. He knows how to build a laugh or punchline, when to take a breath and when to  modulate into wild action. Everything is carefully thought out, timed and released with plenty of imagination, bravado, erupting energy and confidence.


In the title role of Don Juan, Nick Westrate quickly succumbs to the tawdry titillation of the play text and crafts a very amusing, well-paced character portrait of a shallow, narcissistic human being that is bracing, brutal, sexy, decadent and in your face. Bhavesh Patel's Sganarelle is funny, crazy and charming, played with a scene-stealing flourish and mischief that is very much Jean-Baptiste Moliere.

Carson Elrod, as Pierrot, totters around with a spastic gait, manner and conversational anxiousness that is exactly right for his character, peppered with frequent flights of sitcom hysteria and pent-up angst that make his every moment on stage a Molerian knockabout, puffed-up treat. Ariana Venturi, Suzy Jane Hunt and Claudia Logan, cast in the roles of Charlotte, Dona Elvira and Mathurine, each contribute to the merriment at hand with chatter, feeling, inspiration, interaction and naughtiness that piques interest throughout the production. 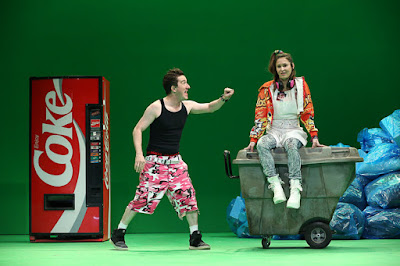 Technically, "Don Juan" has its standouts. The set design by Marsha Ginsberg, which includes bright colored lime green walls, a coke vending machine, heaps of plastic bags of trash, a leather sofa, among other things, is both colorful and abstract. Katherine Roth's modern-dress costumes are playful, hip, outrageous and cavalier and perfectly in sync with the mindset of the various characters who wear them.

Funny, farcical, odd and quirky, Brendan Pelsue's modern day take on "Don Juan" basks in its own narcissistic madness with foppish delight. It's a sugar rush of frenetic energy, played entirely for laughs by a crazy and wonderful cast who quickly succumb to the play's freely interpreted silliness and unquenchable heartache and pathos. If Moliere's your thing, prepare to be seduced by clownish gags, visually addictive engagements and dialogue chock full of mirth, wisecracks and weltered grandstanding. With David Kennedy pulling the strings, things are broad, pumped-up and frivolous. Humor is everything here and this "Don Juan" delivers the laughs, clearly relishing every quirk, tear and knock, reveling in all the liberties taken here. 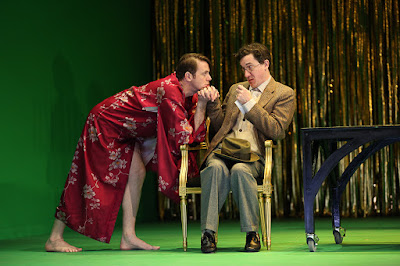