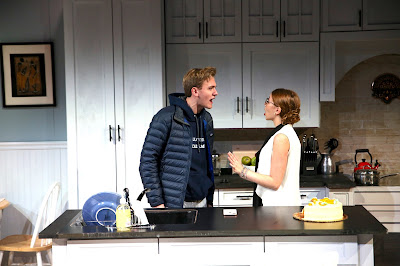 If you're thinking of sending your kids and teenagers to a scholastic environment that has the right drama class curriculum, look no further than St. Luke's in New Canaan. Here, students actively engage in career-focused classes, plays and musicals designed to support individuality and growth mentored by trained professionals who love acting just as much as they do.

As written by Harmon, "Admissions" deals with acceptance policies at prep schools and elite universities, which, in this play is Yale University. Shortly after the play opens, Charlie Luther Mason learns that his best friend Perry, whose father is black and mother is white, got accepted into Yale. Charlie, in turn, received a deferral letter which forced him to run off and scream loudly in the woods before facing his parents and launching an uncontrollable tirade of hurt, frustration and major
disappointment. 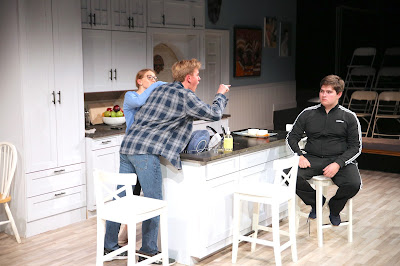 What follows sets the tone for this amazing piece of stagecraft that is full of rage, full of dare, full of surprise, full of angst and believe it or not, full of humor. It is one of those plays that kicks you in the ass, spits you in the face, toys with your senses, leaves you emotionally drained and tells you, quite frankly, to "Fuck off."

"Admissions" is being staged by Jason Peck, St. Luke's Director of Theatre Arts and Co-Artistic Director of Thrown Stone in Ridgefield. An artful, perceptive storyteller, Peck crafts a provocative, sharp theatrical piece that tackles central arguments and weighty questions and undercurrents about white privilege, access and opportunity, racial prejudice and diversity and status quo with in-your-face rawness, connection and honesty. He respects the playwright's choice of dialogue, his cleverly orchestrated scene-by-scene rota, his sanctimonious grandstanding, his lengthy monologues and his booming characterizations. He keeps the play's expletives intact without any cuts, including the word "Fuck," which figures predominantly in the vocabulary of most of the on-stage characters. His knowledge and understanding of the play text is extraordinarily useful and gives the production a raw diversity and conviction that heightens its importance. 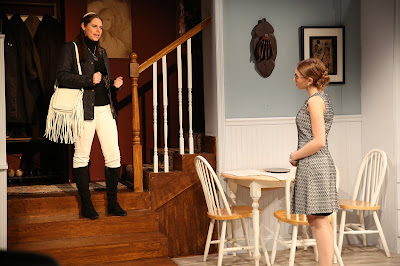 Timing and pacing is mandatory in a work of this nature and Peck doesn't waste a single second. He knows what he wants and he runs with it. He submits a stage blocking blueprint that is rife with application and imagination. He is very precise and detailed when moving his cast through the paces of the play's raging storms and domestic drama. His handling of the show's brilliant running crew throughout every single one of the scene changes is incredibly timed and positioned. He also pays close attention to little things like how a teenager quickly gulps down a glass of wine, how a dad sneakily adds another slice of carrot cake to his already full dessert plate, how a mother prepares a family dinner from scratch, how someone sits, stands and reacts and when to simply take a breath, a pause, a beat and a power down to complete silence.

An actor himself, Peck's handling of his teenage cast is both remarkable and intuitive. These aren't just teenagers playing parts in a school play. These are five serious, determined actors who inhabit their respective roles with brains, skill, stagecraft and emotive performance style and energy. In the grand scheme of things, they make it all seem natural and flowing as Peck moves them about John Rourke Conners' handsome, atmospheric, incredibly designed setting using moves and patterns that are spontaneous and free and never formulaic or stagy. They also come to the St. Luke performance space with the attitude of young professionals who speak from the heart, give the audience a lot to think and talk about and move the action along with provocation, conscience and purpose. 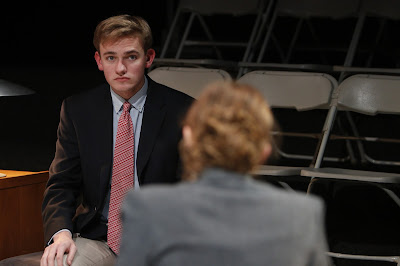 As the frustrated and angered Charlie Luther Mason, Henry Jodka tackles his character's tirades, outbursts and outrageous pronouncements with amazing realness, honesty and emotion. What's particularly refreshing about his work is that he is very much in the moment. Yes, he knows his lines. Yes, the entire play has been rehearsed. Yes, he knows his cues frontwards, backwards and center. But when he speaks, it comes from within. When he performs, never once do you think he is acting. He's the real deal. His reactions, expressions and movements throughout "Admissions" only furthers that notion.

In the role of Charlie's mother Sherri Rosen-Mason, Leila Pearson offers an outstanding, beautifully textured performance that is layered, raw, intuitive and completely in sync with the playwright's conceit for the character. She's in pretty much every scene and commands your attention with her important dialogue and conversations, all of which she delivers effortlessly. As Charlie's father Bill Mason, Cameron Taylor fathoms his depths as an important character with an unbridled charm, force and naturalness that gives every one of his scenes the emotional weight they demand. Using a wonderfully humorous voice to show her character's age, Alexandra Vogel is quirky, offbeat, outspoken and amusing, which is everything the part of Roberta Russert calls for and more. As Perry's mother, Ginnie Peters, Emily Shute gives a solid, centered, precisely right performance that is played with authorial voice, sting and snap and emotion.

Gripping, persuasive, challenging and complex, Josh Harmon's "Admissions" is a fast paced, intelligently written play of real depth performed by a deeply committed cast under Jason Peck's astute, involved direction. It is a play that reverberates with feeling, heartbreak, hypocrisy and pain. Its arguments are heated and crushing. Its emotional connection is entirely truthful. And finally, it's a play that allows its cast of teenage actors to cut loose and perform with refreshing, fueled vigor using a creative mindset and theatrical savvy that hits the right chord at every single unadulterated turn. 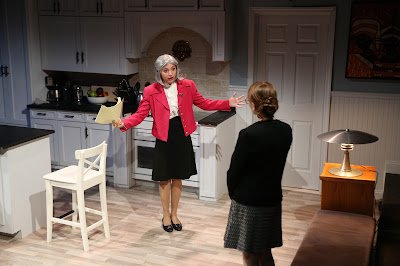