From the Desk of Jim R, Take 2, Column 227, A Review: "Shakespeare in Love" (Connecticut Repertory Theatre) 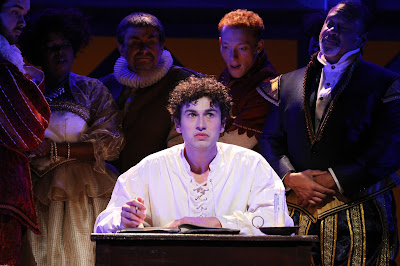 
Taking its cue from the 1998 Oscar-winning film of the same name, Lee Hall's stage adaptation of "Shakespeare in Love" is a delightfully witty theatrical piece that retells the story of young Will Shakespeare's early days as a playwright with obvious charm, crackle, command and inspiration. It is a labor of love that transports its audience back in time to Shakespeare's London, a place that finds the Bard struggling valiantly to transform the comedy "Romeo and Ethel the Pirate's Daughter" into the dramatic tragedy and celebrated work that eventually became known as "Romeo and Juliet."

Connecticut Repertory Theatre's playful presentation of Hall's popular play (based on the screenplay by Tom Stoppard and Marc Norman) is full of insight, invention, dazzle, clarity and dreamy innocence. It's a great company achievement that is profoundly affecting and unforced. It is full of wonder and recognizable grace and warmth. It also jumps and spins with a raw, youthful energy that is fresh and hormone-fueled. 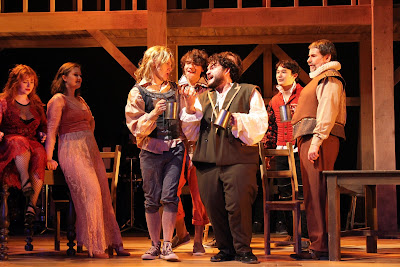 Staging "Shakespeare in Love," director Vincent Tycer naturally eases his audience into the play's Elizabethan setting, its evolving theatricality, its comedic and dramatic mindset and its ensuing, playful fantasia. That said, everything that happens on stage unfolds with good cheer, determination and flourish. It is also well-rehearsed, blocked and maneuvered with just the right amount of honesty, conviction and inspiration necessary to heighten its charm and consequential fluidity. Having directed Shakespearean productions both in the United Stage and overseas in England and beyond, Tycer also brings the right atmospheric touches to the play's remembrance of the early stages of the Bard's career and the different venues where his works were first performed including the Globe Theatre.

As the production evolves, there's so much to savor and enjoy. From start to finish, Tycer knows exactly what he wants and how to stage it. He jumps in with apt engagement. He doesn't waste a single moment. He sustains the right rhythm and beat. He knows how to charge and counter. He is completely knowledgeable of the playwright's conceit and language. He knows when to heat things up and when to power them down. He moves his large cast of actors from scene to scene with ease and purpose. He knows how to get a laugh without revealing the punchline. Romantic moments are projected with love and assurance. Mistaken identities and cross-dressing are addressed in much the same manner as "As You Like It" and "Twelfth Night." When necessary, the play is also awash with a bittersweet melancholy that is appropriately conceived and conveyed  As is, Tycer's naturally tossed, welcoming dashes of angst, merriment, desire, zaniness, bona fide passion and celebration.

The choreography for "Shakespeare in Love" has been researched well in terms of Elizabethan period excitement and splendor while background music, under the leadership of music director Chris Coffey has been reproduced to match the lyrical soundscape of the times. All of the it - vital, positioned, courtly and impactive - is performed live on stage by actor-musicians whose baroque stylization and musicality is beautifully ornamented, acquainted and lovingly emotive while complementing the Shakespeare tale at hand and its story arc progression. 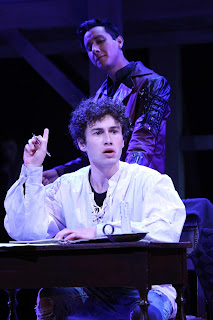 Heading the cast for this production are the equally engaging and charismatic Jack Dillon as Will Shakespeare and Erin Cessna as Viola De Lesseps, both of whom have the necessary wit, charm,

chemistry, balance and comedic timing to make every one of their scenes together gel and resonate.
Dillon, looking and sounding every bit as English as the young romantic playwright he is asked to portray, is personable, witty, confidant and full-voiced, thus, giving his character the required energy and spark the part demands along with the frustration and hesitancy that comes from not being able to find the right words to express himself on paper while writing his next play. Cessna's Viola is just as commanding and played with a certain lightness and lyrical frisson that works particularly well. Her impersonation of the male actor Thomas Kent, a young man who is asked to portray Romeo, is a task that the actress invests with comedic bluster and panache. And when she and Dillon are given dialogue that comes directly from Shakespeare's "Romeo and Juliet," the duo's recitation is so flawlessly delivered, one wishes these moments could be replayed on extended. 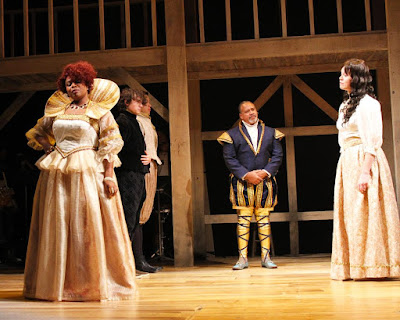 Joining them are Mauricio Miranda as Marlowe, Anthony Cochrane as Henslowe, Guisseppe Jones as De Lessops/Tilney, Andrianna Simmons as Nurse/Molly, Angela Hunt as The Queen, Matthew Antoci as Fennyman, Neil Callahan as Lambert,  Angus MacLennan as Ned, Nick Luberto as Ralph, Thalia Eddyblouin as Kate/M. Quickly, Anthony Giovino as Burbage, Justin Jager as Wessex, Jim Jiang as Peter, Alex Kosciusek as Robin, Hunter Monroe as Nol/Frees, Sean Redahan as Adam and Leone Rodriguez as Webster. Well cast by Tycer, everyone is nicely in sync with the Elizabethan setting, the Shakespearean concept, the dialogue and the play's scene by scene progression.  They are quick on their feet. They know how to play comedy. They know how to get laughs. They also give the production its pulse, its drive, its lift and its vocal adrenaline.

Technically,  this edition of "Shakespeare in Love" is pleasing to the eye with handsome period sets and moody light cues (designed by Morgan Shea and Samuel Biondollio) that enhance and illuminate the theatrical art form of the times. Brittny Mahan's costumes, a colorful mix of Elizabethan and 21st century pairings, are trendy, inventive, ambition and original. It's a designer's vision that complements the action of the play at every single turn.

At CRT, "Shakespeare in Love" is a strikingly beautiful, intelligently conceived tribute to the Bard, his plays, his heroines and his well-spoken leading men. It is a highly energetic work with wonderfully calibrated bits of drama and comedy, all used to entertaining effect under the mindful tutelage of the play's director Vincent Tycer. The cast, a combination of Equity actors and UConn drama students, have great fun with the material, particularly it's well-timed comic conventions, barbs, cross-dressing, double entendres and mistaken identities. They also give the play its necessary snap, zest and poetic verve, which here, is a task that delights and cajoles with decided relish, pulse and well-appreciated involvement. 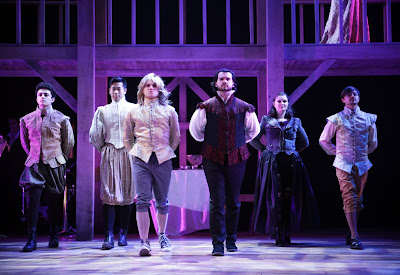