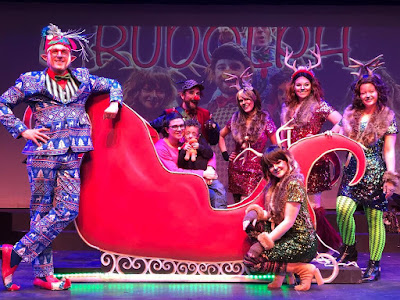 Per tradition, Rudolph, the red-nosed reindeer, a 20th century creature created by Robert Lewis May, is the ninth and youngest member of Santa Claus's reindeer who uses his luminous, bright red nose to guide Santa's sleigh through the wintry skies above from city to city on Christmas Eve alongside his trusty reindeer team to bring presents and holiday cheer to children everywhere.

Without him, Christmas would probably come to a crashing halt, Dasher, Prancer, Cupid and Vixen, among others, would be jobless in the North Pole and Santa Claus would be surrounded by heaps and heaps of undelivered presents that would have to be stored in the holiday vault by very unhappy elves until the following year.

In  "Rudolph," a new play written by Phill Hill, America's best-loved reindeer is faced with yet another crashing blow prior to Christmas Day - a huge snowstorm in the North Pole threatens to cancel Santa's big night unless you-know-who and his shiny, bright nose can lead the sleigh through icy, snowy, uncharted skies and overcome impossible odds with the help of his fellow reindeer. 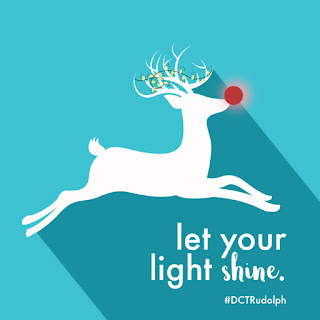 Not to worry, though.
At Downtown Cabaret Theatre, Hill's spin on "Rudolph" ends happily, of course.
But not before, it teases and taunts, excites and cajoles and gets you all pumped-up for Christmas presents, Christmas goodies and Christmas memories about that lovable reindeer and his trusty sidekicks who braved the storm and made Christmas happen for boys and girls all over the world.

As storyteller, Hill brings an old-fashioned charm to the familiar Rudolph story that is engaging, cheerful and sugar-coated. With nothing on his mind except to entertain, Hill's conceit is straightforward, delightful and chock full of sight gags, shenanigans, wildly funny jokes, actor-audience interaction, yuletide anecdotes and colorful characterizations. He also has the right mindset and finesse for this type of play which he colors and outlines effortlessly for both the children and adults in the crowd. 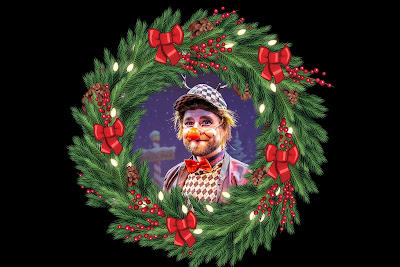 This Children's Theatre production of "Rudolph" is being staged and choreographed by Frank Root, a clever and savvy director who takes hold of the "Rudolph" play text and basks in the cherry uplift of the story, its sunny familiarity, its sentiment, its humor, its up-to-date message about fitting in and its inhabited community immediacy. As "Rudolph" evolves, the comic and musical elements of the story float easily from scene to scene and song to song in light, agreeable fashion that serves the material well. Dance wise, Root's choreography is holiday-tinged and featherweight with a nostalgic, synchronized feel and jingle-jangle that's crisp, intuitive, upbeat and whimsical. The cast has great fun with Root's dance steps, patterns and movements, some of which take their cue from 60's and 70's television variety shows. Admittedly, it's a win-win situation for all.

The musical score for "Rudolph" is comprised of eight thoroughly engaging songs that are strategically placed throughout the story, popping up here, there and everywhere whenever the characters feel the urge to break out in song and let their feelings be known to all the smiling faces out there in the dark. They are "Santa Claus is Coming to Town," "Don't Stop Me Now," "Run Run Away," "Fly Away," "Movin' on Up," "Danger Zone," "Holding Out for a Hero" and "Run Rudolph Run." Playful, spirited and imbued with just the right amount of peppermint cheer and good will, the songs themselves add a fresh twist to the "Rudolph" tale that never falters for a moment. All six cast members are in fine voice - never once missing a single beat - as musical director Aron Smith creates a fun, holiday party atmosphere and sound that unfolds in remarkably consistent ways, offset by an artist ownership and pulse that complements the musicality of the individual songs and their intended meanings, themes and undercurrents. 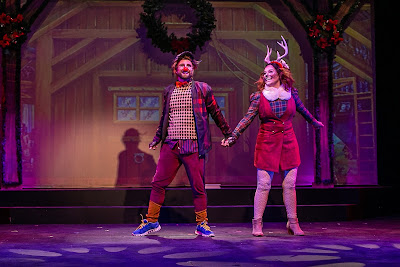 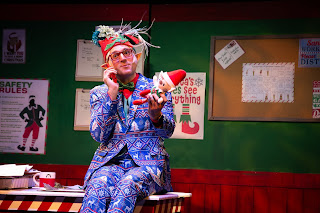 "Rudolph" stars Jason Parry as Rudolph, Andrea Pane as Jingles, Sara Winant as Cupid, Kaylin Weller as Prancer, Lauren Bell as Dasher and Madeleine Tommins as Vixen. All six are especially talented performers whose charm, warmth, personality and actor/audience showmanship give the production its unifying lift, spirit, sugar plum magic and yuletide adrenaline. As envisioned by Hill, "Rudolph" allows each actor to inhabit the role he or she is given, take hold of it, shape and mold it, give it voice (here, everyone adapts a childlike voice that works especially well) and illuminate its veracity through dialogue, song and dance that's exhibited with refreshing honesty and storybook brio. They are quick on their feet. They have great fun gliding from scene to scene. They have great onstage interaction with one another. When the script calls for it, they also interact with the audience most engagingly never loosing sight of their colorful characterizations, the evolution of the "Rudolph" story and the show's lively, impromptu improvisational moments which change from performance to performance depending on the kids and the adults in the audience.

That said, "Rudolph" is a sweet, enjoyable entertainment for kids and adults of all different ages. It is well performed by its engaging cast of six. The story, written by Phill Hill, is easy to follow and includes lots of fun facts about Christmas, Santa Claus and reindeer that even the youngest of kids will be able to enjoy without  any narration or explanation from their parents. It teaches us that what makes someone different or stand out can be extra special. It is chock full of peppy songs and important character values. And finally, it's the right kind of holiday yarn to get everyone excited for Christmas Eve. 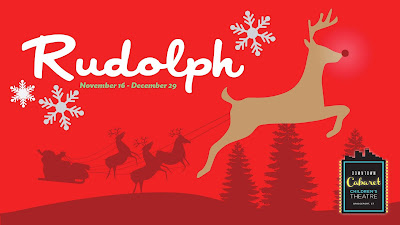