From the Desk of Jim R, Take 2, Column 221, A Review: "Steel Magnolias" (Music Theatre of Connecticut) 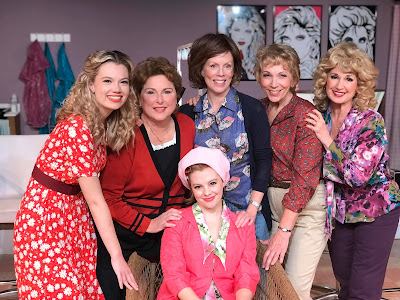 All it takes is the right kind of dialogue to score a home run.


"I do not see plays, because I can nap at home for free."
Ouiser
"Steel Magnolias"

"Well, we went skinny dipping and we did things that frightened the fish"
Shelby
"Steel Magnolias"

"Honey, time marches on and eventually you realize it's marchin' across your face."
Truvy
"Steel Magnolias"

"All gay men have track lightin.' And all gay men are named Mark, Rick, or Steve."
Ouiser
"Steel Magnolias"

"Maybe, I should have an emotional outburst more often. Maybe, I should start havin' them at home. Drum would be so pleased."
M'Lynn
"Steel Magnolias"

"You sound almost chipper. What happened today, you run over a child or something?"
Clairee
"Steel Magnolias" 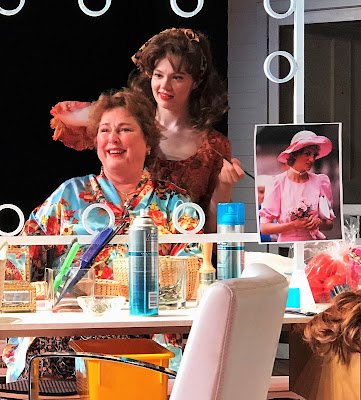 First performed off-Broadway in 1987, but best known as the 1989 film that starred Dolly Parton, Sally Field, Julia Roberts, Olympia Dukakis, Daryl Hannah and Shirley MacLaine, Robert Harling's "Steel Magnolias" was based, in part on real-life incidents from the playwright's own life.
If you've seen the film or the play before, then, of course, you already know what happens. But for those of you who haven't, a lot happens, both good and bad, to this particular group of female friends inside Truvy's, a cozy beauty parlor where everyone's words and personal conversations set the mood for what follows, both on stage and off.

This bright, breezy and very welcoming Louisiana hair salon is the main setting for Harling's sparkling, poignant comedy drama, which is lovingly and truthfully brought to life in Music Theatre of Connecticut's lively second production of its 2019-2020 season. 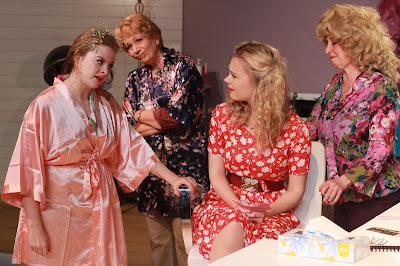 "Steel Magnolias"  dazzles and cajoles as it celebrates womanhood, the stories of womanhood and the heartaches of womanhood with wonderful splashes of peach, pink, rose and magnolia. Plus a fair amount of sunshine, sparkle, glitter, teased hair, curlers and lots and lots of hairspray.
It also gives every actress the opportunity to shine on every level, not just in the freshness and vivacity of the material, but in the characters themselves, all of whom have plenty of baggage, history and back story to boot, offset by candid back talk, cheery one liners and loud, involved character-driven pronouncements that thrust you head first into their colorful, well-written stories.

All of this is given a rich, deeply textured life here, as shaped and molded by director Pamela Hill whose credits include "Always...Patsy Cline," "Vanya and Sonia and Masha and Spike," "The Tempest," "Blithe Spirit," "The 39 Steps" and "Sleuth."  As "Steel Magnolias" evolves from scene to scene, emotion to emotion and laugh to laugh, the audience is privy to a first-class, well-intentioned production that is deeply naturalistic, achingly real and feelingly enacted by its choice, intuitive hand-picked cast. Nothing is out of place. Nothing is overplayed. It is all framed and well thought out by  by Hill who puts her own definitive stamp on Harling's  popular, oft-revived comedy-drama. 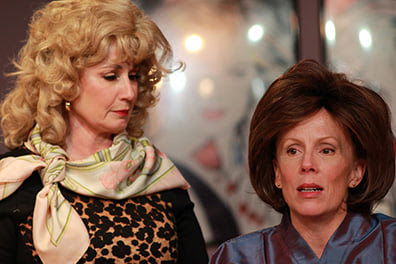 Given the fact that "Steel Magnolias" has only six central characters, in terms of stage blocking, positioning and movement, Hill always knows exactly what buttons to push, what to power up and power down, where and when to move an actor and how to thrust an important story arc front and center through dialogue, characterization and reaction. Her approach is vivid, cinematic and three dimensional. Whether there are two people on stage or four or six, everything that happens is touchingly, comically and tenderly observed and played with the right spirit, pathos, comedy and  sadness set forth by the playwright.

The giving of a Christmas present, the cutting and styling of hair, the answering of a phone, a quiet observation or expression, a hug, a cry or sigh of relief, a sudden outburst, a remembrance, a reflection....all of this (and more) heightens the entire, emotional "Steel Magnolias" experience. As director and storyteller, Hill knows how exactly how actors think and behave, create and build a character, explore and develop and finally, perform an entire play before a live audience. Here, things are so naturally and intimately conveyed, you actually forget you're in a theater watching a play. The closeness of actor to audience makes one feel as if they are sitting in Truvy's beauty parlor as a silent observer or seventh character sipping coffee, flipping through magazines or just watching everyone doing their thing from the sidelines.

The casting is perfect. All six actresses work splendidly together, individually, in pairs and as a unified ensemble. They connect with the story, their particular character and their role in the progression of the story every single second they have on stage 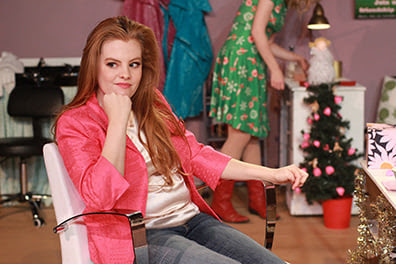 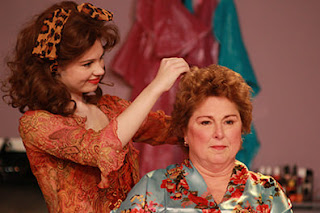 It's a role Andrea Lynn Green was born to play and play it she does with all the heart, kindness, sweetness and passion the part calls for, and so much more. As Shelby, a diabetic young woman who is about to be married shortly after the play opens, Green crafts an amazing, naturally nuanced portrait of beauty, determination and survival that is true to the spirit and pulse of the character throughout "Steel Magnolias." Her enactment of Shelby's on-stage hypoglycemic attack not only illustrates the severity of her illness, but is performed with a realness and rawness that will immediately shake you up and break your heart in two. She also brings voice, vitality and freshness to the part whenever she's on stage.

Investing the pivotal role of Shelby's mother M'Lynn with the command, resilience and reserve the playwright envisioned for the character, Kaia Monroe brings a compelling, emotional courage and energy to the part that is delivered convincingly, remarkably and quite touchingly by the actress. Her big meltdown which occurs during the second half of Act II and the eventual release of emotions and tears that follow is so honest and real, it's impossible not to cry along with her in this amazingly staged, performed and well-known scene from the production.

As the caring, good-spirited Clairee, the widow of the town's former major, Cynthia Hannah is  exhilarating, delightful and utterly passionate about her character and her role in the ongoing story.  Her performance is effecting, honest, strong and well-paced with a charm, spunk and effervescence that comes straight from the hip and from the heart. In the role of Annelle, the runaway wife who becomes the salon's brand new hairdresser, Rachel Rival offers a quirky, wistful and goofy portrayal of a young woman who eventually becomes a born-again Christian and looks to the Lord for spiritual guidance. It's a comic, warm and emotional turn that the actress invests with an earthy immediacy that is inhabited rather than played, thus, making her performance shine, swirl and captivate whenever she's front and center.

Truvy, the wisecracking salon proprietor with a great head of hair and a chitchat flowing personality that would charm the pants off any heterosexual male is played with down home honesty and southern charm by Raissa Katona Bennett, an actress completely attuned to the wit and verve of Harling's play text which she harvests with good-humored thoughtfulness, zing and pin-sharp abandonment. As Ouiser, Kirsti Carnahan is a mighty whirlwind of sass, brass and sour-note artifice that is tossed off cleverly with lots of funny and dialogue-rich moments that are hurled back and forth with the glazed sarcasm and merriment her character is famous for.

Vivid, exciting, upbeat and extremely well done, "Steel Magnolias" offers theatergoers a healthy batch of female conversation, gossip and banter about life, death, marriage, sex, divorce, friendship, birth, money, recipes, religion, bonding, men and sudden, unexpected twists of fate. It is fast. It is funny. It is bubbly. It is intimate. It is sad. It is emotional. It is clever. It unfolds with an organic vitality and pulse that is rare in theater, nowadays.
Most of all, it's about six women who deeply care about each other even when they disagree or cling to age-old opinions and traditions that are fly-away-fun like a delicious cup of hot, flavored coffee and a delicious, home-cooked southern meal on a warm summer night. 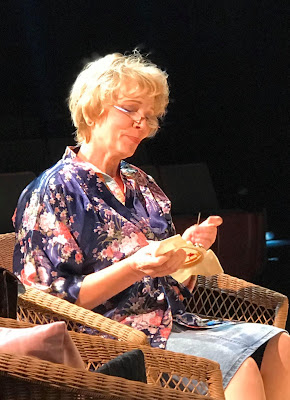 "Steel Magnolias" is being staged at Music Theatre of Connecticut (509 Westport Avenue, Norwalk, CT), now through November 24.
For tickets or more information, call (203) 454-3883.