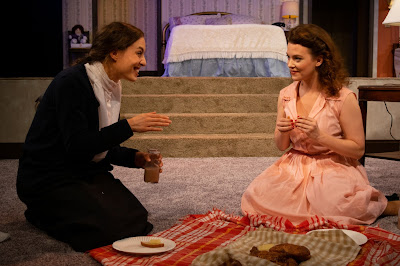 The story of the Holocaust, as seen through the eyes of those who survived the slaughter, the devastation and the concentration camps, comes with memories, shadows, fragments and nightmares of family, friends and people loved, admired and lost.

In "A Shayna Maidel," Barbara Lebow's compelling 1984 drama about two sisters - Rose, safe and living life in America; Lusia, a survivor of the Nazi concentration camps - are reunited in America years after the separation that tore them apart. Rose has no memories of her life in Poland while Lusia is not only haunted by them, but often drifts back and forth through memory with vivid recollections about her mother, her best friend  Hanna and Duvid, the love of her life, who, sadly, has gone missing.

As playwright, Lebow delivers a powerful study of family and sisterhood, privation and privilege, loss and suffering, chance and circumstance and liberation and assimilation that appeals to people of all ages, religions and lifestyles. It's a work fraught with well-written, well-researched historical facts and explanations that lend themselves nicely to the framework of her story, its crucial context, its scene-by-scene evolution, its characterizations and its horrible crimes against the human race.

At Playhouse on Park, Lebow's two-act drama stands tall and proud as a harrowing litany of loss, sorrow and survival in a presentation that is fully committed, redemptive and compelling at every single turn. Fittingly, "A Shayna Maidel" is a rare and arresting play that is timely and painful, extraordinary and emotional and one that moves through the lives of every one of its on-stage characters with the pain, confusion and joy set forth by the playwright. It also celebrates the theater's on-going commitment to important dramatic works that entice and surprise and make you always feel like you are part of the story that unfolds right before your very eyes. 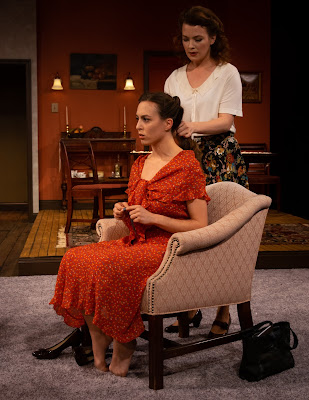 Working from Barbara Lebow's blueprint, director Dawn Loveland Navarro crafts a boldly intense and personal character drama that pulls you deep into Lusia and Rose's story, providing different moods, interactions and intimacy that makes it all very worthwhile. Scenes build and evolve traveling down different paths of reality, conflict and remembrance with astonishingly atmospheric and enveloping touches. As director and storyteller, Navarro also brings an infinitely fluid, natural feel to the play, which gives it added depth and resonance plus an art-house feel that deepens the human resilience and psychological rawness of the play text.

As "A Shayna Maidel" evolves, Navarro always knows where she is going, what she wants, how a scene is to be played and acted and how she wants the audience to react to the storytelling at hand. She doesn't waste a moment, an emotion, an important pause, a character turn, a monologue or an aspiring piece of stagecraft. Here, things are confident, articulate, circular, attentive, emotional and well rooted. She uses the intimate Playhouse on Park space and its actor-audience closeness most advantageously throughout the two-act drama. Her detailed grasp of the material is also configured with a voyeuristic honesty and ambition that is appropriately distinctive and thoughtful in all the right ways. She also plunges you head first into one very extraordinary scene where Lusia and her father Mordechai painstakingly compare notes from meticulously kept pocket journals they have kept on the many dead and missing relatives and friends they have in common. It's one of those theatrical moments that will break you in two...and then some. 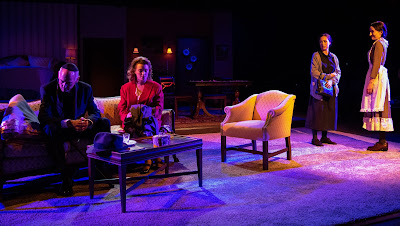 Playing the pivotal role of Lusia Pechenik, a liberated concentration camp survival who travels to America to reunite with her long-lost family, Katharina Schmidt gives an ovation-worthy performance that puts her at the top of her game in this very competitive season of dramatic theategoing. Her portrayal is rife with feeling, emotion, depth, delicacy, grace and curiosity, all important characteristics that give Lusia backbone and nuance in the ongoing story. Inhabiting the role as if the playwright wrote for part with her in mind, she commands attention at every turn. Her every gesture, movement, expression and recitation of the dialogue before her is so believably executed, never once do you thing she is acting. You also can't take your eyes off her for a single second for fear you might miss something important in the telling and evolution of her Holocaust story. 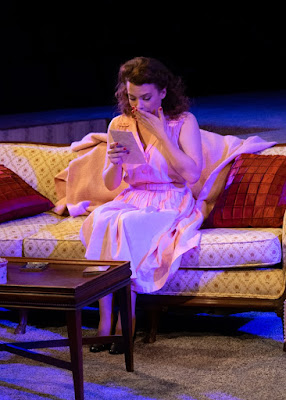 In the role of Rose Weiss, Laura Sudduth has the right mindset and all-American zest and perkiness to bring her character to life honestly and convincingly. Like Schmidt, she too is firmly rooted in the mechanics of Lebow's story, its past and present conflict and pathos and its developmental progression. There's a clear-eyed honesty to her work that is abundantly potent and real, suffused with just the right amount of understanding and knowledge to make her reconciliation with her long-lost sister workable and palpable without the slightest hint of calculation.

As Lusia and Rose's father Mordechai Weiss, Mitch Greenberg delivers a forceful, involved portrayal of a man conflicted by his own private burdens of guilt, parental responsibility, victimization and wrong choices. He's the real deal by all accounts from his authentic Yiddish accent to his vivid, well-played dramatic moments that are unleashed with stirring pathos throughout the production. Alex Rafala, as Duvid Pechenik, brings depth, feeling and nuance to his portrayal of Lusia's beloved husband. As Lusia's high-spirited childhood friend Hanna, Julia Tolchin crafts a very memorable performance that unfolds with both a big-hearted feel and piercing sadness that is exactly right for her characterization. In the role of Mama, Krista Lucas provides a strong, thoughtful and sensitive portrait filtered through reality and remembrance with affecting realism.

As important today as when it was first performed off-Broadway in 1987, "A Shayna Maidel" is a deeply affecting, luminous drama about the reunion of two sisters who were separated during the Nazi's Polish blitzkrieg and reunited years later in America. It is an important work of theatre that demands to be seen, framed by surprising pathos and power, beautifully detailed direction by Dawn Loveland Navarro and six honest, exquisitely acted performances that reflect the aftermath of the Holocaust in very frightening, emotionally-charged ways that linger long after the play has ended.

One final note: Translated from Yiddish, "a shayna maidel" means "a pretty girl." 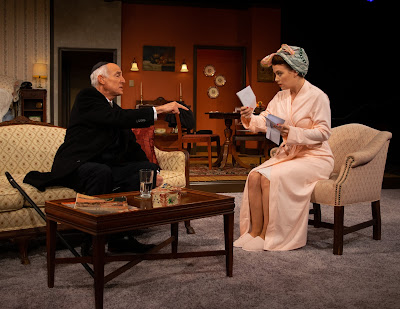 Photos of "A Shayna Maidel" courtesy of Meredith Longo