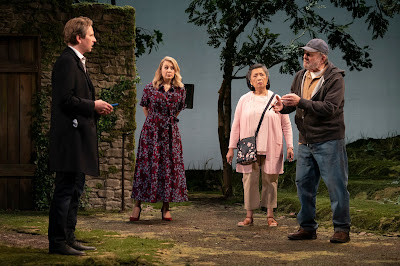 If you've seen "The Realistic Joneses," "The Underlying Chris" or "Thom Pain," then you already know that playwright Will Eno is a fascinating writer who can turn every day life upside down and all around with conversational dialogue that is absurd, ridiculous, weighty, cerebral and slippery.
It's a gift - a ritualistic exchange of sorts - that puts Eno at the top of his game and rightly so. His live-wire language and ferocious take on life itself is in a class all its own. It is also one that is very, very real.

Case in point: "The Plot" at Yale Rep.

For this go-round, a cemetery, imaginatively envisioned by set designer Sarah Karl, is the setting, so to speak, for five people who have plans of their own amidst this quaint, country graveyard including final resting places, a big-time commercial business development, and other strategies and gambits, which, for plot purposes, are best kept under wraps so as not to spoil the big reveal that's kept hidden by the playwright until it's time to slap everyone in the face with an announcement that no one saw coming. Or did they? 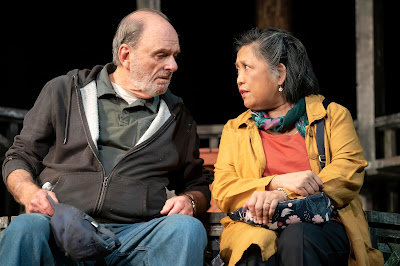 There's much to savor in this snappy, well-made comedy that tosses normalcy out the window for a series of lively, idiosyncratic, absurdest encounters that the playwright is famous for. As usual, you're never quite sure what's going to happen next, how it will all play out or what exactly the chitchat at hand might reveal or conceal. With Eno pulling the strings, that zigzagging unpredictability is exactly what drives "The Plot" forward. You simply go along for a ride that unfolds with a gleeful, runaway train abandon that's impossible to resist.

At Yale Rep, "The Plot" is being staged by Oliver Butler, the co-founder and co-artistic director of the Brooklyn-based theatre company, The Debate Society. His directorial credits include "What the Constitution Means to Me," "Thom Pain," "Blood Play," "The Whistleblower," "The Open House" and "Timeshare." Here, Butler delivers a perfectly balanced, involving production that never once makes a wrong more or opts for cheap tricks to get a laugh. There's wit and abundant sarcasm. There's charm, immediacy and quirky togetherness. There's unexpected twists and turns. There's also a wonderful sense of solidarity, quickness, incident and collaboration. 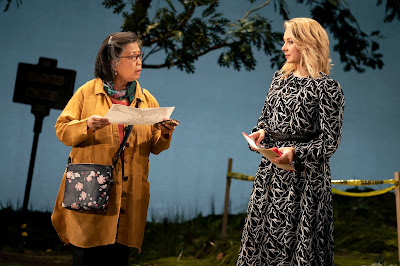 Timing - peppy, intuitive, wisely positioned timing - is everything in "The Plot" and Butler swathes Eno's text with gusto, vocal firepower and the right choreographic angst and cheer to keep the on-stage action whirling and spinning with extreme vision and originality. That said, he's a savvy interpreter who knows what he wants and how to run with it. He can be wise, ridiculous or full-blown when the script asks him to be. He can pull a prank out of thin air with saucy repartee and get away with it. As "The Plot" evolves, he also brings a refreshing honesty to the project which heightens its already impactive animation, allure and spot-on story arc rotation. 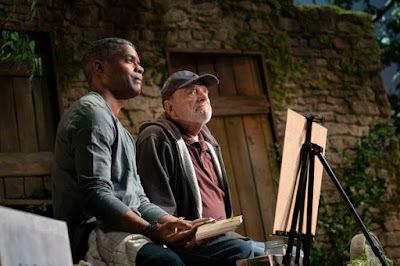 Harris Yulin, a brilliant, versatile character actor whose credits include "A Lesson from Aloes," "Hedda Gabler," "The Diary of Anne Frank" and "The Price," plays the part of Righty with a big-hearted warmth, wryness, wit and compassion that makes every one of his scenes fascinating, perplexing and well worthwhile. As Grey, Jimonn Cole observes "The Plot's" ongoing game of truth, lies and deception with perfectly rendered cynicism. Jennifer Mudge, in the role of the unmistakably cool, sometimes misunderstood Donna, delivers a wonderfully smooth portrait of a shrewd businesswoman who is more than just a pretty face in the bedroom and in the boardroom. Stephen Barker Turner's wild and wacky portrayal of snarky businessman Tim gets laughs in all the right places due to the actor's impeccable comic timing, his dry, droll line delivery and his deadpan, appropriately timed reactions and expressions. As Righty's wife Joanne, Mia Katigbak crafts a truthful, deeply passionate performance that is genuine, confident and always inspired.

"The Plot" is an important piece of theater with an authentic voice that rings true with surprising, deeply felt storytelling techniques and craftsmanship. All of which is marvelously facilitated by director Oliver Butler who gives Will Eno's rich, organic playtext the appropriate resonance it deserves, offset by hilarious, well-orchestrated performances, comedy and engagement. It's a play that reverberates with feeling and confidence and one that pulls you deep into its twisty, perplexing world where anything can happen and does. 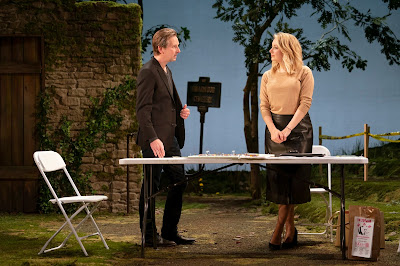 Photos of "The Plot" courtesy of Joan Marcus