From the Desk of Jim R, Take 2, Column 229, A Review: "The Gingerbreads of Broadway" (Pantochino Productions) 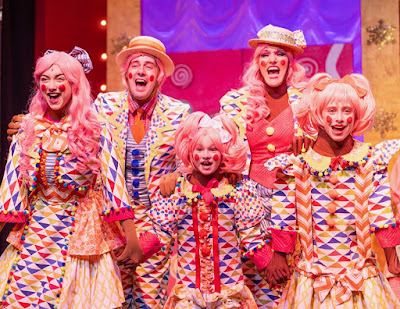 A new musical at Pantochino Productions is always an event in itself and "The Gingerbreads of Broadway - a wild and wacky production about the entertainment industry - arrives with plenty of celebratory fanfare and excitement.

There's egotistical Broadway superstars competing with relative unknowns for a prime spot in a new Broadway musical. There's stagestuck mothers anxious to steer their children into showbiz no matter what the cost. There's hungry, pushy producers waiting for their big break on Broadway. There's also lots of mixups, mishaps, crooked deals, backstabbing, walkouts, threats and eleventh hour surprises waiting in the wings along with a very happy ending. And that, in a nutshell, is what makes "The Gingerbreads of Broadway" one of the funniest, delightful musicals of the year.

As written by Bert Bernardi, the two-act musical evokes memories of the vanished world of Broadway from a very long time ago. It hilariously exposes the psychotic addiction to stardom and overnight success. It charts and attacks the showbiz myth with full-tilt determination. It has great fun slamming the point home about the industry with devious, marvelously orchestrated relish. It also brings up roses - no pun intended - for all involved in the race toward the limelight and the opening night curtain.

Elsewhere, there are laughs, lots and lots of laughs to keep you happily entertained throughout the entire production. And Jimmy Johansmeyer's colorful, spectacular costume designs - Broadway caliber every inch of the way - are well worthy of a round of applause or two. Every one of them is a standout in their own right. What a talent! 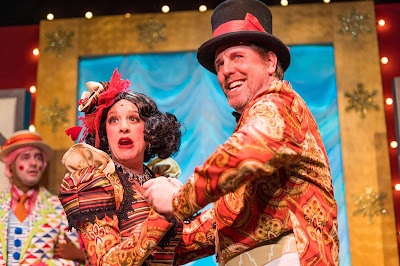 Staging and directing "The Gingerbreads of Broadway," Bert Bernardi has great fun spoofing everything from "Gypsy" and "42nd Street" to bring his tale of showbiz craziness and tinsel-town glitz and glitter to life. Here, as in other musicals he has written and directed, he knows what works, what doesn't, how to set up a song or a laugh and how to make perfect sense out of the silliest of ideas. It all comes together quite seamlessly as Bernardi tells yet another amusing tale about the entertainment industry using just the right amount of confidence, imagination and charm that made previous musicals at Pantochino sparkle and shine much to the delight of everyone on stage and in the audience.

First and foremost, Bernardi is an original. A true original with a creative mindset that never stops spinning. As creator and storyteller, nothing is taken for granted. Nothing is thrown in for extra measure. Nothing is staged as an afterthought. Nothing occurs out of the ordinary.  More importantly, no two musicals at Pantochino are alike.  Instead, they are a labor of love that respect the concepts and conceits of the very musicals they spoof, parody and wickedly attack. They unfold with natural whimsy, merriment and high-spirited giddyap. They contain characters and dialogue that are funny and well-intentioned. They are easy to follow and easy on the eye. And finally, nothing gets lost in the translation. They are unique and special at every single turn. 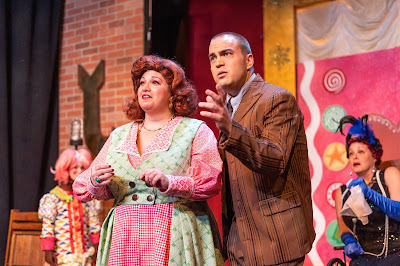 The musical score for "The Gingerbreads of Broadway" - an energetic mix of heart, soul, chutzpah and razzle dazzle - has been smartly written by the music making duo of Bert Bernardi (lyrics) and Justin Rugg (music) whose collaborative efforts at Pantochino Productions include "The Wicked Witch of the West: Kansas or Bust," "Glitz! The Little Miss Christmas Musical" "Beat Bugs: A Musical Adventure" and "The Waffle House Five." There are 12 songs in all.  They are "Hello My Baby," "I Was Made For You," "Honestly Wonderful," "I Can Bake," "We're the Gingerbread Family," "The Corner of Broadway & Christmas," "Two Plus One," "There's a Christmas Dream (For Every Light on Broadway)," " The Gingerbreads of Broadway," "Honestry Wonderful (Reprise)," "The Show Will Open" and "Holidayzapoppin."

A musical bouquet of good cheer and cherry-ripe encouragement, the songs themselves unfold with fine touches of originality, deftness, humor, sentiment, camp and cuteness reflective of the period that inspired each and every one of them. They fit seamlessly into the show's impressive, fast-paced, two-act scenario. The placement, the orchestrations and the lyrics carry the action forward without the slightest hint of hesitation or calculation. They are so very right for the characters who sing them and bring them merrily to life. There's also a personal recognition, sweetness and melodic specificity to the actual music that reveals an abundance of fresh, ingenious musical concepts and ideas. 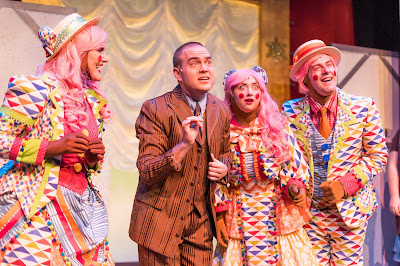 Under Justin Rugg's active, direct musical direction, the rush of sound, pulse and virtuoso that greets each musical number is balanced, addictive and rhythmically booming. It's show-catchy musical theatre work of the highest caliber, performed and recorded with amazing clarity and gleeful abandon that commands attention, pushes boundaries and complements the pending/ongoing action of the "Gingerbread" story. Everything sings and rings with meticulous attention paid to every detail of the score itself. All of the musical numbers are sung and performed brilliantly. And when it comes time to harmonize or sell a song with Broadway luster and brio,  the performers themselves deliver a clean, crisp harmonious sound, rife with excitement and delight that serves the material and the story very well. 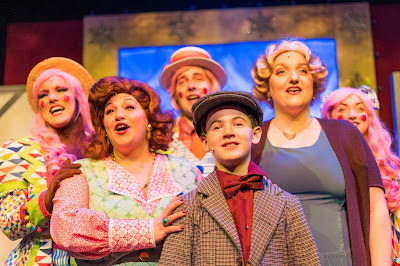 Everyone in the cast are especially gifted, talented, well-rounded performers whose charm, warmth, wit and confidence give the production its unifying lift, pulse, drive, sparkle and free-flowing adrenaline. Under Bernardi's deft direction, each actor inhabits the role he or she is given with the right comic flash, dash and verve that serves the material well. Everyone understands their role within the musical inside out, front and center and all around. They are quick on their feet. They know how to play musical comedy and play it well. They have great onstage interaction with one another. They know how to get a laugh and deliver a punchline unobtrusively. And individually, every single one of them stands out in scenes, songs, dances or special moments that thrust them center stage to bring the "Gingerbread" story to life.

In conclusion, "The Gingerbreads of Broadway" is a cute, syrupy-sweet nod to those big, well-oiled Broadway musicals of yesteryear that came gift wrapped with backstage fairy tale plots, happy endings, corny jokes, loveable characters, smart lyrics and divine melodies. It is a snappy, happy-go-lucky entertainment fueled by breezy, carefree direction, wonderfully inspired performances, giddy dialgoue, playful choreography and fond memories of movie and stage musicals we all know and love. Its bursts of nostalgia and candy cane goodness are just what the world needs right now along with catchy, joy-filled songs that say a lot of family, tradition, talent, camaraderie and believing in one's self. And nobody does it better than Pantochino Productions. Nobody! 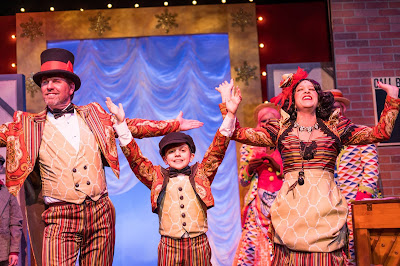 "The Gingerbreads of Broadway" is being staged by Pantochino Productions (40 Railroad Ave., Milford, CT), now through December 22.
For tickets or more information, call (203) 843-0959.
website:pantochino.com
Posted by JimRuocco at 10:49 AM