From the Desk of Jim R, Take 2, Column 231, A Review: "Joseph and the Amazing Technicolor Dreamcoat" (Downtown Cabaret Theatre) 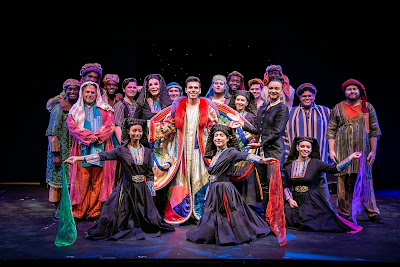 It's been a banner year at Downtown Cabaret Theatre with one joyful, colorful production after another matched by wonderfully truthful performances and direction that reflect the venue's confident, authentic voice and its ongoing commitment to excellence in year-round musicals, plays, revues and quality children's theatre.

With "Joseph and the Amazing Technicolor Dreamcoat," directed with full-tilt exhilaration and cheery jubilation by Andrea Pane, they've save the best for last.
Really?
Yes, really.

Here, "a crash of drums" and "a flash of light" bursts with an energy and craftsmanship that is not only showstopping, but magical, passionate and iconic in its own visually arresting ways. 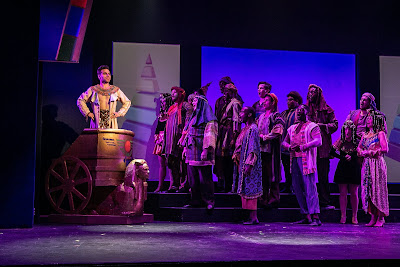 This "Joseph" dazzles and pops.
It delights and inspires.
It charms and cajoles.
It leaps and soars.
It sings and dances.
It spins and twirls.

In 1968, long before "Jesus Christ Superstar," "Evita" and "Cats," Andrew Lloyd Webber and Tim Rice created what they refer to as "a modest, innocent pop cantata set many centuries ago, not long after the Bible began." Then and now, "Joseph and the Amazing Technicolor Dreamcoat" tells the familiar story of an idealistic young dreamer who clashes with his eleven jealous brothers who conspire against him and sell him into slavery in Egypt.
Not to worry, though.
The plan, of course, backfires (remember, this is a musical with a very happy ending), once Joseph reveals his dream interpretations (i.e., fortune-telling talents) to the rich and powerful and rises to the very top of Egyptian society, reaping all its tempting and materialistic rewards. Soon after, a reunion follows with his entire family. Did you expect otherwise? 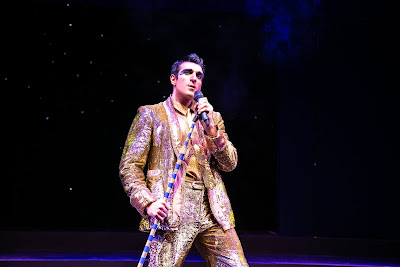 To bring the "Joseph" tale to life, Downtown Cabaret has enlisted the talents of Andrea Pane who earlier this year staged and directed "The Full Monty,"  a hilarious musical comedy about a group of six unemployed men who create their own strip-tease act to make enough money to get their lives back on track. No stranger to musical theatre, Pane crafts an irresistible, exhilarating production, framed and performed with tremendous warmth, pulse, drive, discipline, style and energy. From start to finish, the show oozes candy-coated sweetness, charm and sparkle, offset by an intuitive, cleverly conceived vision that not only complements the material, but give it a freshness and newness that other revivals often lack. And therein, lies this "Joseph's" engaging, appropriate allure.

As director and storyteller, Pane is a visionary who dances to his own decided beat. He's an original of sorts who likes to invent and reinvent. He takes chances and runs with them. He is full of surprises that you never saw coming. He knows what works and what doesn't. He has great fun putting an entire show together. He also likes to sit back and watch it snap, crackle and pop. Here, you get a singing camel, a goat with a bloodied severed head, a heated tango brimming with fiery passion, a sex scene that is both naughty and playful, an often shirtless Joseph that leaves nearly every female member in the audience panting and drooling with contented delight and a very frenzied Act II finale that nearly blows the roof off of Downtown Cabaret. And that in a nutshell is what keeps Pane at the top of his game. He's a talent like no other and one whose impact and determination matches the musical story he has been commissioned to tell. 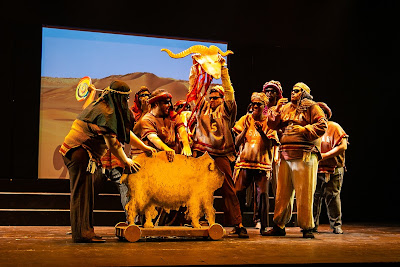 Written by Andrew Lloyd Webber (music) and Tim Rice (lyrics), the musical score for "Joseph and the Amazing Technicolor Dreamcoat" contains 25 songs. They are "Prologue," "Any Dream Will Do," "Jacob and Sons," "Joseph's Coat," "Joseph's Dream," "Poor, Poor Joseph," "One More Angel in Heaven," "Journey to Egypt," "Potiphar," "Close Every Door," "Go, Go, Go Joseph," "Pharaoh's Story," "Poor Poor Pharaoh," "Song of the King," "Pharaoh's Dream Explained," "Stone the Crows," "Those Canaan Days," "The Brothers Came to Egypt/Grovel, Grovel," "Who's the Thief?" "Benjamin Calypso," "Joseph All the Time," "Jacob in Egypt," "Any Dream Will Do (Finale)," "Close Every Door (Reprise)" and "Joseph Megamix." The actual score (this was the duo's first collaboration) is an invigorating mix of musicality that is both sunny and lightweight with crowd-pleasing tunes that range from Elvis-style rock and 1960's pop to French chanson, calypso, country western and gratifying Broadway.

What's especially fun about this "Joseph" is the orchestral wonder and melodic flourish of Thomas Conroy's musical direction, which vibrantly remasters music from over 50 years ago with a richly elucidated wallop and dynamic more in sync with today's musical theatre than its nostalgic past. The show, of course, still brims with its own life force - visceral, confident, blazing, kaleidoscopic, melodic, in the moment - but the overall effect is much more direct and moving, effortlessly attuned to the action, the concept, the story arcs, the characters and the varying themes and undercurrents at hand. 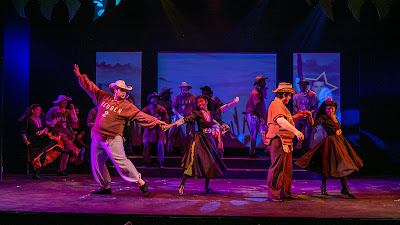 With Conroy on piano making fantastic music alongside a handpicked team of exceptional, talented musicians (Michael Mosca (guitar), Rodger Post (drums), Joe Singuglia (bass), Gary Ruggiero (reeds), Cody Halquist (French horn), every one of the show's songs - "Any Dream Will Do," "Close Every Door," "Jacob and Sons," "Those Canaan Days," "One More Angel in Heaven," "Go, Go, Go Joseph," to name a few - is tight, composed, uplifting and full of rhythmic energy. This being a revival that has been retooled and reshaped for today's audience, some of the songs have been smartly re-imagined and re-positioned to utilize the splendid vocal ranges of the entire cast (higher belt notes, extended orchestrations, for example) and heighten the show's airy, uncluttered, silky sounds, surges, tempos and hammering nostalgia. As musical director, Conroy also produces a clear, pure sound of  depth and harmony from every one in the cast, all of whom come to the "Joseph" arena with the right insight, stamina and musical theatre dedication. From solos to reprises and big production numbers, the musicality exhibited on the Downtown Cabaret stage is immaculate, expressive, inspired and dynamically pliant.

The choreography for "Joseph and the Amazing Technicolor Dreamcoat," the brainchild of Cassie Carroll, is a lively, frenetic, visual pastiche of various dance styles and movements that deliver the trademark rhythms and celebratory heartbeat wedded into the fabric of the two-act musical. From cool spins and fancy kicks to giant leaps and spirit-filled dashes and dalliances, everything is carried out in eye-catching ways that complement the musical stories at hand. The ascending emotion, the blending of bodies, the athletic prowess and the notably strong synchronization are impeccably executed with harmonious and steadfast eclecticism by Carroll. Together with Pane, she makes every moment stand out in this thrilling, energetic "Joseph" revival. 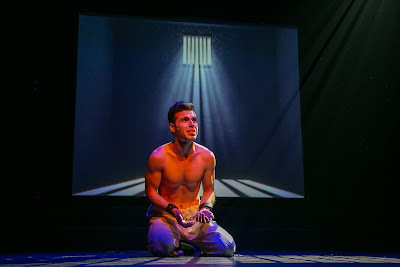 It's a part he was born to play and play it he does.
He can act. He can sing. He can dance.
And, he clearly works out at the gym.
In the lead role of Joseph, Robert Peterpaul, best known for his stirring portrayal of the troubled, suicidal Moritz Stiefel in DCT's "Spring Awakening," is handsome, confident, sexy, charismatic, vulnerable and personable, which is exactly what the part calls for and how is should be played according to the Webber and Rice rule book. He also brings a refreshing naivete and earnestness to the part which, in other productions, is surprisingly glossed over. Vocally, he delivers all of his character's songs with the polish, glide and the emotion that they demand, offset by a charm, passion and smoothness that reflects their intended meaning. His emotional take on "Close Every Door" and "Any Dream Will Do," both of which have been re-orchestrated, in part, to complement his big, full-voiced sound, are delivered truthfully and sensitively with Peterpaul in complete control, basking in the mindset of the lyrics, their beauty and their obvious sentimentality. 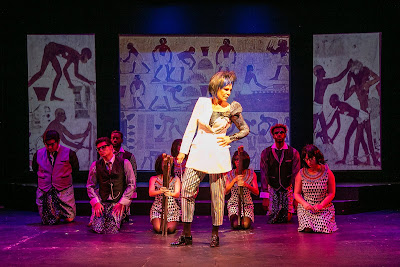 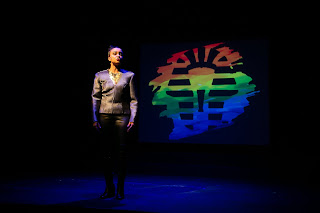 As the show's Narrator, Desi Amato comes to Downtown Cabaret with a voice, a vocal ability and a charm that impresses at every turn. Her performance is heartfelt, confident and sincere. She also breathes new life into the popular Webber/Rice score using a clear, luxuriant, positioned and fiercely personal vocal style that makes everything she sings sound fresh, new and wonderfully alive.
In the role of the Pharaoh, an Elvis-like presence who stops the show with the exhilarating "Song of the King," Andrea Pane shakes, rocks, rattles and rolls with a Conrad Birdie/ Elvis twinkle and gait that is well worth a standing ovation or two. It's one of those "Joseph" star turns, which he delivers with arched eyebrows, narcissistic charisma and well-choreographed moves to boot. A bit of gender-bending finds the wonderfully animated Karen Hanley doing her bit as Potiphar, a role normally played by a male actor. It's an inspired piece of casting that Hanley tackles with diva-like camp, passion, glamour and creative aplomb. So much so, you wish she had more to do.

Cheerful, bright and breezy, "Joseph and the Amazing Technicolor Dreamcoat" is a thrilling, eclectic  musical achievement that embraces the bounce and pulse of the popular Andrew Lloyd Webber/Tim Rice score, its simplistic storytelling, its buoyant rags-to-riches conceit and its feel-good song-and-dance merriment. The dream cast -  led by Robert Peterpaul, Desi Amato, Andrea Pane, Karen Hanley and a very engaging ensemble - have great fun bringing this zesty musical to life. Their peppy, winning charisma gives the two-act musical a purpose and charm that other incarnations lack. They also bring fun and innocence to the piece along with a certain vitality and freshness that goes a very long way. Cassie Carroll's atmospheric, on-tap choreography is exciting and organic. Andrea Pane's inventive, witty direction keeps the show whirling and twirling in glorious technicolor. There's lots of surprises and well-timed jokes and humor. This revival also has its heart in the right place. That said, it's gold and glittery to the core. 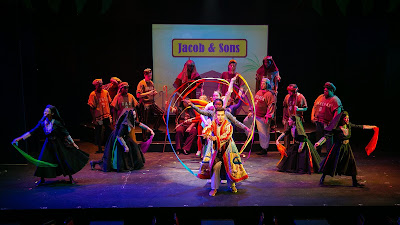 Posted by JimRuocco at 8:36 PM