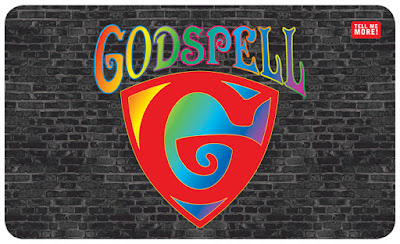 This amazing cast of ten bring real rock concert pulse and vibe to Ivoryton Playhouse's impassioned  retelling of "Godspell," the 1971 Stephen Schwartz musical that takes its cue from a random series of accessible parables, freely adapted from "The Gospel According to Matthew."

This "Godspell" not only has a beautiful, enriched harmony about it, but it is accompanied by a clear-sighted, modern-day vision that is assertive, commanding, visionary and palpable. And that is exactly what sets it apart from other productions of the same name. 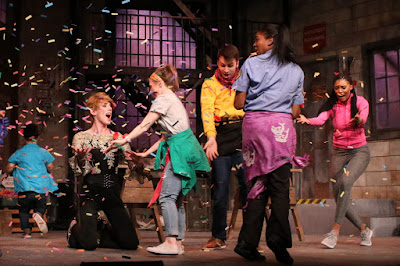 If this incarnation is altogether more endearing and trail blazing in execution, that's because it has been directed by Jacqueline Hubbard, the award-winning executive/artistic director of Ivoryton Playhouse. Celebrating 25 years at the theater, she brings a savvy,  intuitive mindset to every play or musical she has directed along with a directorial dynamic, rich in execution, invention, illumination and rediscovery.

So who better than Hubbard to direct "Godspell?"

For this interpretation,  she uses the reworked, licensed 2012 version of the show, which includes the stirring ballad "Beautiful City" from the 1973 film and better yet, she opens the show with "Tower of Babble," a weighty, important  musical number almost always omitted from every production of "Godspell," but lovingly restored here at Ivoryton. That song, a ground-breaker of sorts, immediately sets the tone for what's to follow, using some some very intricate, imaginative staging by Hubbard that not only makes the first 10 minutes of the musical sizzle and resonate, but also introduces the very different, colorful characters who play a key role in the recognizable Jesus/ Judas story and the many parables conceived and re-imagined by playwright John-Michael Tebelak who also wrote for the book for the original 1971 production of "Godspell." 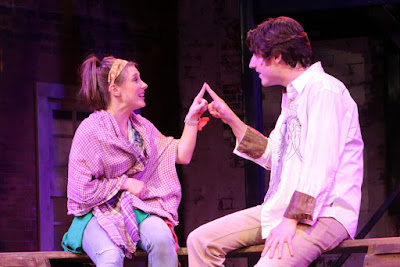 Staging "Godspell," Hubbard breathes new life into the oft-produced musical, using a refreshing honesty and unified vibrancy that other productions seem to miss. Mind you, this is not just any romp through the gospels. With Hubbard as its interpreter, the show's message of love and acceptance in a much darker world hits home significantly and carries lots of well-orchestrated humor, joy, pathos and tears with it. Alas, her observations, depiction and treatment of the material are specific, detailed, and performed without any whiff of calculation.

Using the refitted 2012 play script, Hubbard gives the musical a rapid-fire eagerness that works especially well, now that "Godspell" has been given a much-needed makeover. Moreover, she doesn't clutter the production with unnecessary shtick or silly, contrived, slightly improvised staging that detracts from the show's strung-together parables and Schwartz's breezy "Godspell" musical score. This conceit is applied to scene after scene and song after song. Mind you, there is some playful vaudevillian humor interspersed here and there, but it's straightforward and direct without that annoying overkill that made other "Godspell" revivals tiresome, clunky and amateurish. Hubbard's vision is well thought out, well timed and smartly crafted. She knows exactly what she wants. Her cast follows her cue and runs with it. And the energy level of everyone involved, is completely and honestly refreshing.

For "Godspell,"  Hubbard has enlisted the talents of choreographer Todd Underwood whose Ivoryton Playhouse credits include "Rent," "West Side Story," "Saturday Night Fever" and last season's "A Chorus Line" and "Grease." The perfect candidate to bring the "Godspell" story to life in terms of dance, Underwood's playful choreography is both appealing, intuitive and stylish. Given Schwartz's trademark score, he crafts potent, powerfully performed staging that makes every choreographed number, vivid and individual. 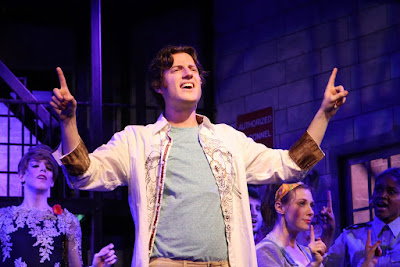 Banish all thoughts of overkill or hotshot extravagance with Underwood at the helm. Whereas other choreographers tend to overemphasize the "Godspell" material to the point of sheer ridiculousness using doodlebug flourishes and rattling movements and tableaux's that have absolutely nothing to do with the story at hand, Underwood's showman's chutzpah is vaudevillian, respectful, controlled and perfectly in sync with Schwartz's conceit for "Godspell" and the choices dictated by the music and the characters who populate the parabalstic story.

As "Godspell" unfolds, Underwood lets his talented ensemble cast swim and frolic through "Tower of Babble," "Turn Back, O Man," "Prepare Ye," "Light of the World" and "Learn Your Lessons Well," among others, with optimistic, powerful and creative abandon. Bodies blend, embrace and support, creating unified movements, prances and jaunty feats that dazzle or stand alone individually. Or they simply groove with ease, swirl, dip or twirl, spin and jump depending on the number at hand or the music's percussive prompting. It's all very versatile, unique and completely in harmony with the show's gospel parables and teachings of important lessons through song, dance, speech and movement. 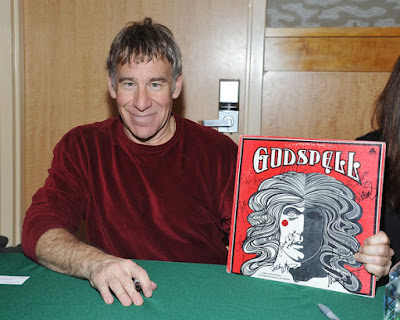 With music and lyrics by Stephen Schwartz, "Godspell" contains 18 musical numbers. They are "Prologue," "Tower of Babble," "Prepare Ye," "Save the People," "Day By Day," "Learn Your Lessons Well," "Bless the Lord," "All For the Best," "All Good Gifts," "Light of the World," "Learn Your Lessons Well (Reprise)," "Turn Back, O Man," "Alas For You," ""By My Side," "We Beseech Thee," "Beautiful City," "On the Willows" and "Finale."
Then and now, Schwartz knows how to craft songs that are well worth listening to. His gift for melody and lyrical representation is effective and seasoned. There's also a truthfulness to his musicality, most noticeable in how a song functions in a show, how it is positioned and how it drives the storytelling forward unobtrusively.

At Ivoryton, musical direction for "Godspell" is provided by Michael Morris whose previous work at the Playhouse includes "Dreamgirls," "Rent," "A Night with Janis Joplin" and "A Chorus Line." Doubling at the keyboards and as conductor, he creates a shimmering aura of melody and rhythmic melodrama that is lucid, sweet, endlessly colorful and often pillow-soft. The pop-rock charm of Schwartz's popular musical score is revitalized with youthful exuberance and connective eagerness. There's also a raw eclecticism to the music that is funky, folksy, glam and marshmallow fluffy. 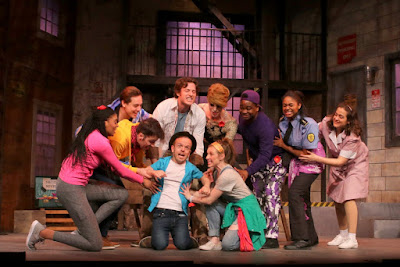 Working alongside his trio of handpicked, talented musicians - Billy Bivona on guitars, David Uhl on bass and Alex Giosa on percussion and drums - Morris makes every moment of the "Godspell" musical songbook uplifting and memorable. Its coruscating energy is fueled by festive glitter and sheen, ripe piquancy, heartfelt shivers and waves and nicely layered imaginative rhythms, beats and tonalities. This musical quartet also brings a freshly minted sound to such such hummable treats as "Day By Day," "Turn Back, O Man," "Beautiful City" "Save the People" and "By My Side."  There's so much to marvel at, the audience happily sits there transfixed, quietly enjoying and savoring the impressive power of the "Godspell" orchestral sound and its tremendous vitality. 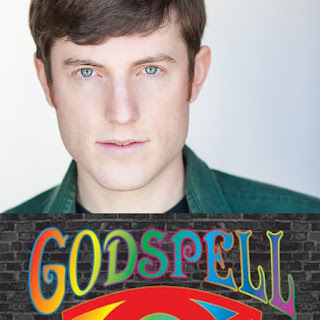 Sam Sherwood, in the role of Jesus, is handsome, smiley-faced, passionate and three-dimensional, which is exactly what the part calls for. Here, as in last season's "Once," he oozes plenty of innate charm and warmth and works hard to get everything right, which he does. Vocally, he impresses with a pitch-perfect sound, most noticeable in "Beautiful City," "Save the People" and "Alas For You." He also naturally connects with everyone in the cast, which, in order for "Godspell" to work its magic, is mandatory. In the dual role of Judas and John the Baptist, Carson Higgins is strong voiced and commanding. There's lots of edge and angst to his interpretation along with an obvious vulnerability and complexity. His vocal rendition of "Prepare Ye" is both honest and dynamic, as is his well-delivered "All For the Best" duet with Sherwood. 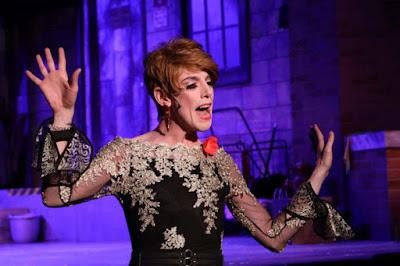 From "A Chorus Line" to "Godspell," Sam Given takes you on a supercharged journey into make-believe that's full-throttle, fast-paced, beautifully persuasive, sweet and honeyed and supremely confident. From his first entrance in the show to his powerhouse Act II solo turn "Turn Back,  O Man," which he performs with wild abandon, Given delivers the goods - and then some - with a determined to conquer persona that's fantastically entertaining, full of sparkle, rich in character and clearly inspired.
What's especially gratifying about Given is that he's completely genuine, comically and dramatically expressive and entertainingly electrifying. At the same time, he dances to his own tune as he dons his signature Millie Grams wig, costuming, make-up and glitter to build and solidify a female characterization of attitude, spunk, polish and soulful passion guaranteed to drive any audience wild. 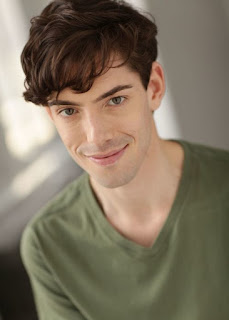 Given, in drag, is a brilliant dance off between appearance and reality, fraught with resilience, emotion, diversity and glitter ball magic. It's so wonderfully balanced and enacted, if anyone is doing "Mame," Sam is your man. Just think of the possibilities. The pose, the look, the performance, the songs, the character. Given can do it blindfolded.

Rounding out the "Godspell" cast are Lily Tobin, Jerica Exum, Morgan Morse, Kedrick Faulk, Kalieah Hankerson, Josh Walker and Gabriella Saramago. They also contribute greatly to the musical's greatness as both ensemble players and soloists, all of whom get their moment to shine in musical numbers ranging from "Day By Day" and  "Light of the World" to "Learn Your Lessons Well" and "Bless the Lord."  All seven bring a bit of brilliance, elan and peppy vibe to "Godspell." They also seem to be enjoying themselves, which in a musical of this nature, goes a very long way.

The only theater to get "Godspell' right in the last decade or so, this Ivoryton Playhouse presentation is timeless, spiritual, lively and original. It turns the story of Jesus and his followers into something both earnest and meaningful. The music is rich and melodic. The atmospheric set design by Martin Scott Marchitto is outstanding. Cully Long's costumes are both imaginative and colorful. Hubbard, Underwood and Morris are the perfect creative trifecta. The cast is sensational. And the show's reworked once-over and radical kick, allows it to pulse and resonate with today's audience. That said, you haven't seen "Godspell" until you see it at Ivoryton. 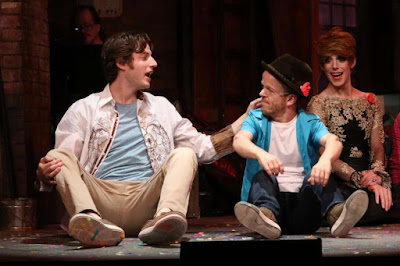 Posted by JimRuocco at 8:52 PM