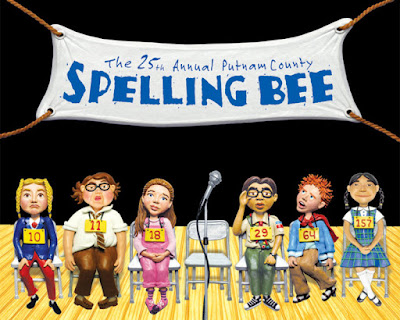 It takes a special brand of talent to make "The 25th Annual Putnam County Spelling Bee" click and resonate and this cast of nine does exactly that in this hilarious, illuminating production that gets high marks for ingenuity, eccentricity and honest-to-goodness good cheer.

"The 25th Annual Putnam County Spelling Bee" is exactly that and so much more.

Scripted by Rachel Sheinkin, a playwright with a knack for this sort of comic mayhem and kitsch, "Spelling Bee" teases and taunts and cajoles and delights as it pokes fun at competitions, impossible expectations, dynamic wordplay, quirky kid goofiness, child rearing, nerdy oddballs, know-it-all braggarts and so much more.

Who wins?
Who loses?
Who finds their emotional center?
Who is destined for greatness?
Who will be the top speller, years from now? 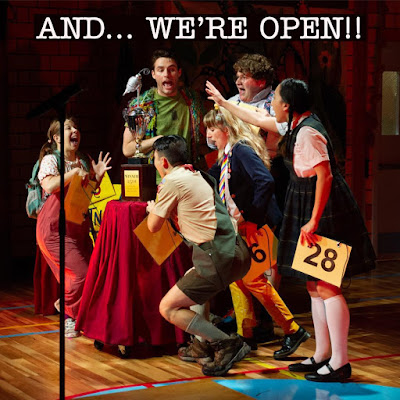 To bring "The 25th Annual Putnam County Spelling Bee" to life, ACT of CT has enlisted the talents of Michelle Tattenbaum, a talented auteur whose directorial credits include "Peter and the Starcatcher," "Mother Jones and the Children's Crusade," "Urinetown," "White Guy on a Bus," "Love/Stories" and "Nobody Loves You." Working from Rachel Sheinkin's hilarious play text, she crafts a swift, smartly-paced, warm-hearted entertainment ideally suited for the ACT of CT venue.

As director, she brings tremendous insight and passion to the "Spelling Bee" experience. Almost everything that happens amidst Jack Mehler's incredibly designed school auditorium set has a wonderful spontaneity about it, from the actual progression of the spelling bee competition to the pre-selected audience members who are summoned on stage to compete in the win or lose proceedings, completely unprepared for what lies ahead. 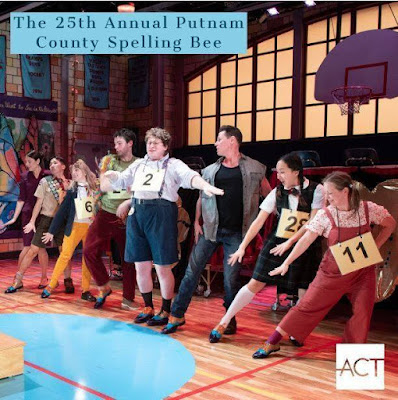 Elsewhere, Tannenbaum has great fun defining each of the central characters and their role in the story, dramatically, comically and musically. There's also a cleverly-orchestrated, running gag about the actual words that everyone in the competition is asked to spell- crepuscule, syzyay, weltanschauug, strabismus, for example - that is conveyed with appropriate cheer and wicked abandon by both director and her very able cast. Laughter, including loud belly laughs, abounds throughout the production, much to the delight of everyone on stage and in the audience. 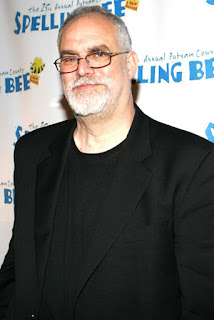 Finn's musical take is both hilarious and poignant, guided by cleverly-timed bits about awkward adolescence, first-time erections, intimidation, vindictiveness, magic footwork, vanity, mockery, gay pride, spelling bee anticipation, parenting, rule books and shining moments that thrust the competitors in the spotlight. Not exactly Sondheim, Webber, Schwartz or Lerner and Loewe, the "Spelling Bee" score" is both serviceable to the plot, the story and the characters who bring the individual songs and ensemble numbers to life.

Regardless, the actual conceit is clever, cynical, simplistic, playful, emotional and crazy-intense. There's also an innate optimism and cascading swirl to the music and lyrics, which heighten the patter, the definition and finally, the insight into the human condition.

Overseeing Finn's work is musical director Katya Stanislavskaya and music supervisor Bryan Perri, both of whom are akin to the speciality of the piece, its witty word play, its complex melodies, its resounding silliness and its vast, emotional landscape. With the able assist of band members Tom Cuffari, Rob Jacoby, Dennis J. Arcano and Melissa Westgate, the pairing of all parties allow the material to gel, evolve and resonate with the right directness, color and fundamental simplicity as dictated by Finn. The cast, in turn, have great fun with the music, giving it plenty of sparkle and energy to make it gleam and pulse with a steady flow and meaningful aesthetic. 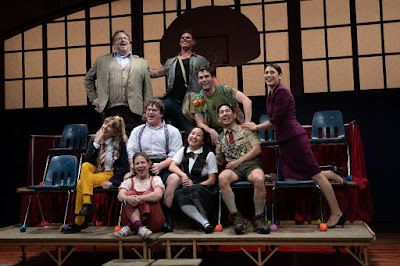 With casting that's absolutely perfect, each of these nine performers gets his or her chance to shine as "Spelling Bee" takes them on a musical journey through song, dance and wordplay. As actors everyone is completely in sync with the show's concept, its evolution, its quirkiness and the very characters they are asked to portray. It's all rehearsed, of course, but there's such honesty and realness to everything that they say and do, you often forget that they are actors performing in a play. Vocally, this is as polished a group of singers out there, as was the case with both "Evita" and "Working,"  staged earlier this season at ACT. They hit the right notes. They hit the right harmonies. And they do it so, most engagingly. They also never once break character, which, in a show of this nature is very easy to do. 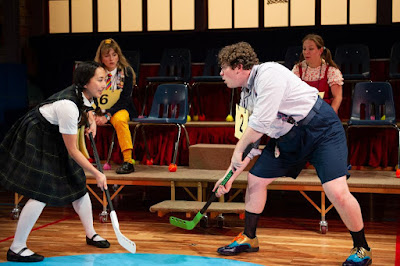 "The 25th Annual Putnam County Spelling Bee" is a witty, ingenious, sweet and sentimental musical confection that awakens the little kid - or should I say smart ass - in all of us. It is chock fun of     unparalleled energy, melancholy and melt-down crazy shtick. Michelle Tattenbaum's direction is smart and savvy. The music is sharp, gimmicky and absolute FUN. The performances are stellar and quirky. And the overall experience of it all, is both special and endearing, an ACT of CT trademark you're not likely to forget for quite some time. 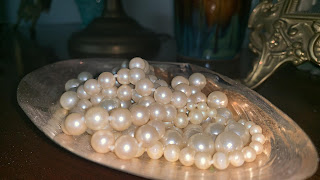 Posted by JimRuocco at 1:59 PM