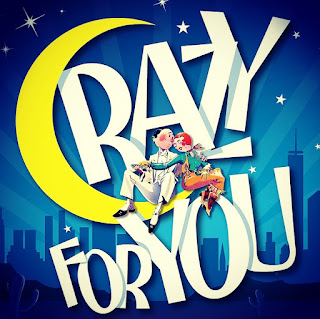 With music by George and Ira Gershwin and book by Ken Ludwig, "Crazy For You" has its heart so firmly in the right place, it's impossible not to be thrilled or excited by its flavorful menu of charm, nostalgia, laughter and good cheer.
Brilliant, funny and wonderfully at ease with its period-tinged reflections, nostalgia and heartbeat, this 1930's musical unfolds with a flash-bang-wallop flourish and cherishable gait that's hard to resist.

Giddy and carefree.
Sweet and sentimental.
Breezy and bright-colored.
Glorious and crazy.
Tuneful and delightful.

"Crazy For You" has everything you could wish for in a big-hearted musical from magnificent songs and spectacular dances to cheeky silliness and organic spirit and spunk. 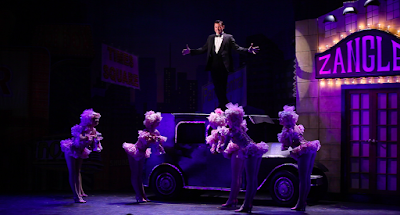 The story, in a nutshell, goes something like this.
Taking its cue from the 1930 Broadway musical "Girl Crazy," "Crazy For You" is the lightweight, oft-told story of a boy, a girl, a producer, a mother, a fiancee, a laid-back town, a run down-theater facing foreclosure, a bunch of cowboys, a group of Broadway chorus girls, a well-calculated disguise, an eleventh hour surprise and a very happy ending.
Nothing serious, just boy-meets-girl/boy-loses-girl/boy-wins back-girl, set to music and dance.

To stage a musical like "Crazy For You" and stage it well, you need someone who completely understands musical theatre, its creative mindset, its vibrancy, it's two-act story board, its evolution, its songbook and its colorful characters. Sarah Combs who staged several productions at Sharon Playhouse including "Footloose," '"Hairspray," "Annie Get Your Gun" and last year's invigorating "All Shook Up," is the perfect choice to bring this two-act musical to life. Her directorial work is admirable, electric, straightforward, buoyant and passionate. She creates a fun-filled, frothy environment that is completely in sync with this form of musical storytelling. She knows exactly what she wants. She lets nothing get in her way or cloud her judgement. She takes chances. She thinks on her feet. She goes with the flow. She knows how a period musical looks, feels and moves. She finds new ways to tell a familiar story. And finally, she surrounds herself with the best actors, the best dancers, the best singers and the best creative team possible. 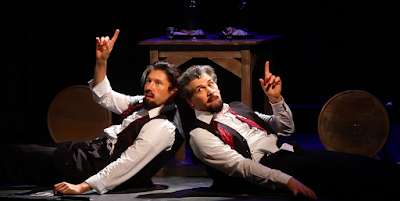 With the help of the everyone at Sharon Playhouse, she keeps "Crazy For You" on its toes and firmly rooted in the nostalgic gaiety and innocence that categorized Broadway musicals of the 1930's. Here, every actor's move, gesture, position, mood, expression, nuance and line delivery is indicative of that bygone era. Elsewhere, she knows how to fully utilize Elizabeth Popeil's brilliant, atmospheric set design to full advantage, thus, moving her actors about on every playing level, from top to bottom, without any form of unobtrusiveness. Her directorial style is so precise and natural (the set changes are absolutely flawless), nothing that happens in this musical (remember, it's the 1930's), is ever questioned, argued, out of place or out of sync for a millisecond.

The musical score, written by George (music) and Ira Gershwin (lyrics) is joyous, witty, wistful and melodically appealing. "Crazy For You," in turn, incorporates "the best of the best" from the Gershwin songbook (lyrics from Gus Kahn and Desmond Carter are also featured), using 24 songs from the duo's many hit musicals including "Girl Crazy," "Oh, Kay!" "Shall We Dance," "A Damsel in Distress" and "Treasure Girl." They are:"K-ra-zy For You," "I Can't Be Bothered Now," "Bidin' My Time," "Things Are Looking Up," "Could You Use Me," "Shall We Dance?" "Someone to Watch Over Me," "Entrance to Nevada," "Slap That Bass," "Embraceable You," "Tonight's the Night," "I Got Rhythm," "The Real American Folk Song is a Rag," "What Causes That?" "Naughty Baby," "Stiff Upper Lip," "They Can't Take That Away From Me," "But Not For Me," "But Not For Me (Reprise),"  "New York Interlude (Concerto in F)." "Nice Work If You Can Get It," "Bidin' My Time (French Reprise), " "Things Are Looking Up (Reprise)," and "Finale." 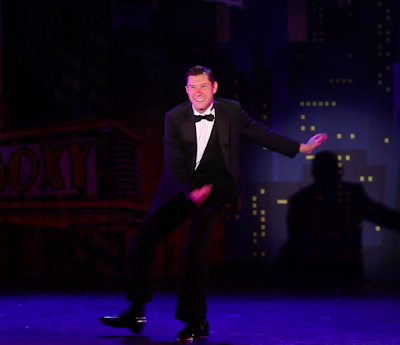 Eric Thomas Johnson who was in fine form for last season's highly entertaining "Always...Patsy Cline" at Sharon Playhouse returns as musical director for this production.  Joining Johnson (conductor/keyboard) for "Crazy For You" are Dave Pratt (trumpet), Walter Barrett (trombone), Mike Lee (bass), Liz Handman (violin), Rich Conley (reeds) and Tim Hermann (drums). As before, Johnson is a skilled musician for whom the demands of musical theatre are easily met and unleashed with the intelligence, inspiration and the affection they deserve.

Given the vast, ground-breaking George and Ira Gershwin score implemented for this particular production, Johnson, with the able assist of his exceptional orchestral team, meets the demands of the music, quite swimmingly, conveying the pulse, drive, nerviness and snap of the music, portraying it as both period piece and essential Jazz Age oeuvre. It's all here: the irrepressible brash energy, the pungent complexity, the harmonious musicality, the indelible catchy lyrics, the unique, rhythmic touches and flourishes, the breakneck tempos, the spirited spontaneity, the creative high points and the confident, saucy glissando's.

What's especially fun about this production is how each and every one of the songs - all very diverse in style and interpretation - fit neatly into the context of the piece while conforming to the mechanics of both entertainment and nostalgic Broadway musical fare. They are properly placed throughout each act. They carry the action forward with propelled interest and diversity. They create the necessary magic and candy-coated innocence of the era from whence they came. They also add zest and zing to the show's already winning formula.
Throughout "Crazy For You," Thompson lets the song material breathe and resonate so that it can take on many different colors in telling detail and convey the musical richness and imaginative dynamic of its creators. No matter what song is played - "I Got Rhythm," "But Not For Me," "Shall We Dance?" -  the song itself and the meaning behind each lyric is met with appropriate dash, pizzazz and zing. 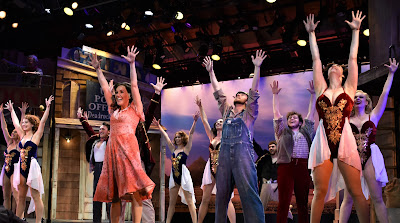 Last year's season opener -  the very stylish and saucy "Anything Goes" at Sharon Playhouse - benefited greatly from the creative, intuitive talents of choreographer Justin Boccitto whose stylish flourishes and eye-popping dance movements heightened the show's success on every choreographic level.  Here, Boccitto, who also doubles as the show's leading man Bobby Child, succeeds on every level imaginable. From rehearsal hall to stage, he gives "Crazy For You" the necessary oomph and sparkle it deserves in terms of style, character, mood, wit, engagement and dance tableaux. From high-energy numbers that include "I Got Rhythm" and "Slap That Bass" to the the buoyant, simply-stated "Shall We Dance?" and "Nice Work If You Can Get It," Boccitto, once again, brings an honest, refreshing distinct 1930's feel to all of the dances, matched by just the right amount of attitude, innocence, sweetness, boldness, froth, candy floss and glamour. Once he gets going, there's no stopping him, which in a musical of this caliber goes a very long way.

Under his expert tutelage, the cast performs the show's stellar dance routines like nobody's business (Boccitto wouldn't have it any other way), clearly demonstrating that the dancer is, both artist, showman and athlete, trained to tackle anything at hand (there's a lot going on here from one musical number to the next), with the elegance, symmetry, style, precision and the individuality it deserves. As "Crazy For You" unfolds, the dance excellence created by Boccitto and his talented ensemble is grounded in the choreographic versatility and lyrical expressiveness envisioned by the show's creators. Everyone breathes new life into the familiar songs and dance numbers and makes them fresh again. So much so, you wish you could hit "replay"  and watch them again and again. 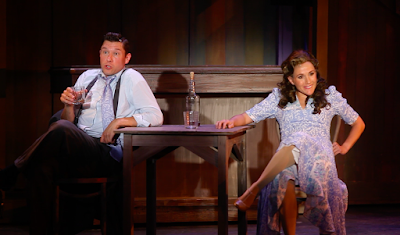 In the role of Bobby Child, a disillusioned New York banker who'd rather star in a Broadway musical that deal with other people's money, Justin Boccitto offers a five star character turn that's chock full of joy, charisma, personality and 1930's spark and razzle dazzle. As actor, singer and dancer, he's the real deal- endearing, attractive, smart and savvy. Make no mistake about it. No matter what he does, you're with him every step of the way. It's a role he plays believably and ever so charmingly like a roguish young Lawrence Harvey, a dashing Fred Astaire and a very debonair Gene Kelly all rolled up into one. He is also blessed with the kind of grace and easy charisma that defines every dance moment. He goes with the flow and makes everything he does spontaneous rather than rehearsed. And vocally, he deftly nails the Gershwin songs with heart, authority, wisdom and glorious embellishment. 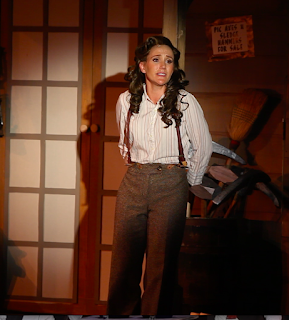 As Polly Baker, the young, tomboyish, fiercely-minded Nevada woman whom Bobby falls head-over-heels with in three minutes of their first meeting , Amanda Lea LaVergne enchants, beguiles, delights and entertains, offering yet another magnetic star turn just as she did as Reno Sweeney in last year's rousing "Anything Goes" at Sharon Playhouse. Like Boccitto, she is well cast and polished to perfection, playing her part with defining spunk, sass, enchantment and undeniable spirit. But Polly is her own creation. It's a role she plays intuitively and believably (she is very mindful of the period and its nostalgic link to the past) on every level - actress, singer and dancer - and one she invests with the style and spirit of a Broadway leading lady who enjoys being on stage in front of an audience doing what she loves best.

Addison Garner as seductress Irene Roth, is both mischievous and sexy as she sings the marvelously choreographed "Naughty Baby" to rattled Deadlock, Nevada saloon keeper Lank Hawkins, played with appropriate angst and likeability by Ryan Thomas Curley. As New York showbiz impresario Bella Zangler. Joey Sorge is funny, delightful and in fine voice, particularly during his showstopping "What Causes That?" duet with Boccitto. His mirroring scene with the actor's fake Bella Zangler is perfectly executed in grand vaudevillian style and it's one of the major highlights of Act II.

In conclusion, "Crazy For You" is the perfect summer refreshment. It is one of those big, classic Broadway musicals that's filled with one showstopping musical number after another. The songbook by George and Ira Gershwin is both catchy and irresistible. The dancing and direction is clever, traditional and marvelously old school. The ensemble cast, from leading player to supporting and ensemble, is absolutely amazing. And the show itself not only merits a standing ovation or two, but it is one of the most exhilarating, jump-for-joy productions to come out of the Sharon Playhouse in the last year or two. If you love musicals (any frankly, who doesn't)  it doesn't get any better than this. 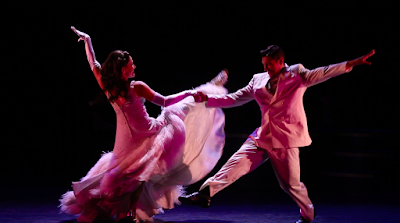 Photos of "Crazy For You" by Jonathan Doster.