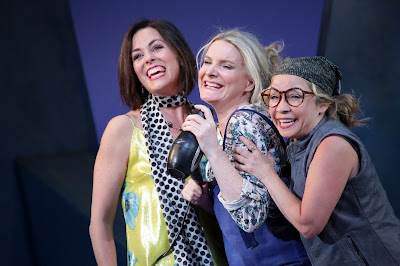 Some shows are meant to be performed over and over and "Mamma Mia!" the hit London/Broadway musical that's been bookmarked into the catalog of musical theater "success" stories for a couple of decades, shows absolutely no sign of slowing down.
It is one of those shows that demonstrates the enduring power of romantic musicals that come gift wrapped with catchy scores, fluid staging, cute characters, lively choreography and happy endings that actors and audiences simply cannot get enough of.

It is terrific fun.
It is energetic and full-out.
It is sweet and syrupy.
It is heartwarming and charming.
It is shrewd and gleeful.
It is a welcome diversion.

With Terrence Mann at the helm as director working alongside Geraldine Anello as musical director and Mary Ann Lamb and Jessica Walker doing double duty as choreographer's,  this "Mamma Mia!"  dances to its own tune, which is part of its charm and guilty pleasure allure. And therein, lies its enjoyment. 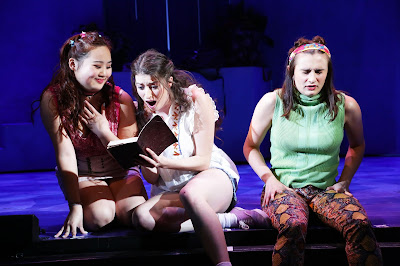 The story of "Mamma Mia! " as written by Catherine Johnson, is simple enough. As the musical opens (the action is set somewhere on an island in Greece), 21-year-old Sophie Sheridan finds her mother Donna's diary from 1979 and decides to contact the three guys mentioned - Sam, Harry and Bill - one of whom could very well be her father - and invite them to her upcoming wedding to Sky.  Donna's two best friends - Tanya and Rosie - are also en route to the nuptials, but no one has any idea of what Sophie has done, not even her mother. Well, not at first, anyway.

Staging "Mamma Mia!" is acclaimed actor/director Terrence Mann whose Broadway credits include starring roles in "Les Miserables," "Cats," "Beauty and the Beast," "The Scarlet Pimpernel," "Tuck Everlasting" and "Finding Neverland." A creative talent who knows theater inside out, front and backwards and upside down, Mann brings tremendous wit, savvy and passion to this production along with a marvelous sense of intuitive stagecraft which kicks it into orbit and keeps it spinning and twirling most engagingly. 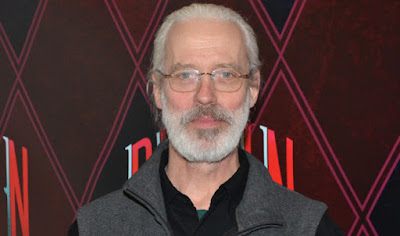 The core of this oft-produced musical comes from its heart, its soul, its romance, its intimacy and its belief that second chances in life are not only possible, but they can and do work if the fates and consenting parties allow it to happen. Here, those story elements and others are shaped brilliantly and cleverly by Mann who allows this "Mamma Mia!" to breathe, evolve and fly naturally through both conversational interludes and those magical musical moments when characters burst into song to express their innermost thoughts. Nothing is taken for granted. Nothing looks out of place. Nothing is exaggerated. And nothing is thrown for laughter's sake that doesn't really belong.

What sets this production apart from others is that Mann looks at it differently, as both actor and director. He knows what works and what doesn't. He knows how an actor speaks, moves and creates. He knows what to highlight and when to pause. As creator, he also brings a remarkable freshness and appropriately winsome spark to the material that is reflective in the staging, the blocking, the interactions, the songs and the fluidity of the set changes, which are not only impeccably timed to the beat of the music, but never once stop the action dead in its tracks. The cast, all of whom remain in character as they happily move scenery and props into place, accomplish this feat swimmingly, taking their cues directly from Mann and the show's amazing creative team. 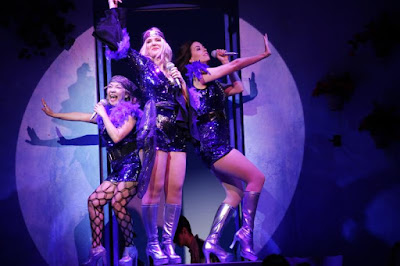 Based on the songs of ABBA, composed by Benny Andersson and Bjorn Ulvaeus (Stig Andersson is also credited in the footnotes for certain songs used in the two-act musical), "Mamma Mia" includes 26 musical numbers culled from the pop-tinged ABBA songbook. They are "Prologue/I Have a Dream," "Honey, Honey," "Money, Money, Money," "Thank You For the Music," "Mamma Mia!" "Chiquitita," "Dancing Queen," "Lay All Your Love On Me," "Super Trouper," "Gimme, Gimme, Gimme (A Man After Midnight)," "Voulez Vous," "Under Attack," "One of Us," "S.O.S.," "Does Your Mother Know?" "Knowing Me, Knowing You," "Our Last Summer," "Slipping Through My Fingers," "The Winner Takes It All," "Take a Chance On Me," "I Do, I Do, I Do," "I Have a Dream," "Mamma Mia! (Encore)," "Dancing Queen (Encore)" and "Waterloo."
The songs themselves, nicely incorporated into Catherine Johnson's romantic story, are serviceable to the plot, it's progression and the various characters who sing them. Every single one of them are fun, fun, fun and completely hummable.

With Geraldine Anello as musical director, "Mamma Mia!" achieves a musical greatness that unfolds with plenty of life, plenty of heart, plenty of snap and plenty of disco ball fantasia. Completely akin to the song style that is ABBA - pop rock, light ballads, folksy glam, novelty kitsch - Anello dutifully respects and understands the unstoppable, invincibly commercial romantic bliss that is ABBA, the group's lathered expressionism and the surface beauty and intimacy of the songs themselves. That, in a musical of this nature, goes a very long way.

Working alongside a handpicked team of exceptional musicians (Tom McDonough, Chris Coffey, Thomas Bora, Richard "Gus" Gustamachio, Alan Dougherty,  Timothy Masacarinas, Nick Cutroneo and Matt McCauley), Anello brings a certain freshness to the "Mamma Mia!" score, matched by a nuanced verve and pulsating flair. Everyone is totally in sync with ABBA's achievements - "Mamma Mia!" Dancing Queen," "Voulez Vous," "Super Trouper" - throughout the two-act musical, marvelously capturing the feeling, the confidence, the color and the sparkle evident in the vibrant and varied musical score. At times, the orchestral sound is so polished and uninhibited, that sonic brilliance allows you to enjoy and experience the music of "Mamma Mia" from an entirely new, unique perspective. 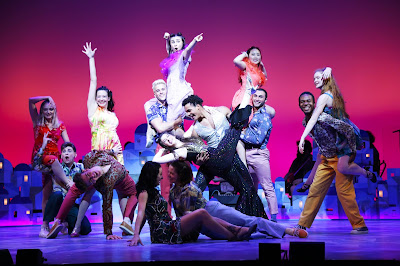 Choreography, when done right, is also key to the "Mamma Mia!" experience. Here, Mary Ann Lamb and Jessica Walker take hold of the many musical numbers than require specialized dance movement and create a whirlwind of ABBA frenzy that's catchy, inventive, acrobatic, feverish and sugar-charged high. Things are flashy. Things are celebratory. Things are ferocious. Things are gum-drop gooey. Things are sexy. Things are clean. Things are well-rehearsed. Things are trademark athletic.  Though it all, the entire "Mamma Mia!" cast are in fine form, reveling in the eye-popping, playful, wildly uninhibited choreography devised by Lamb and Walker, always putting their best foot forward, no matter what the dynamic dance duo have up their sleeve. They have so much fun, it's impossible not to be moved or completely swept up in the on-stage dance mania of it all. 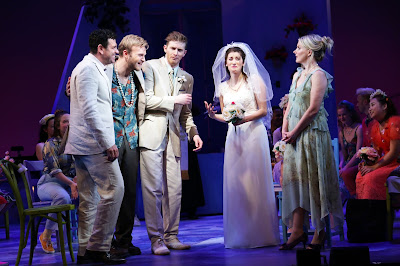 "Mamma Mia!" stars Jessica Hendy as Donna Sheridan, Kelly McCarty as Sophie Sheridan,
Jennifer Cody as Rosie, Lauren Blackman as Tanya, Bradley Dean as Sam Carmichael, Jamie Colburn as Bill Austin, Rob Barnes as Harry Bright, Mason Reeves as Sky, RJ Higton as Pepper, Torrie D'Alessandro as Ali and  Helen Shen as Lisa. Individually or coming together as an ensemble, everyone delivers important, confident performances that are so real and so natural, the essential message of the piece resonates believably and emotionally at every turn without any form of calculation or hesitation. Vocally, their teamwork is stellar and pitch-perfect as is their ability to cut loose with the many different dances they are asked to perform under Lamb and Walker's tutelage. As actors, they also bring a zing and snap to the story that never falters, offset by a certain raw truthfulness, which in a musical of this nature goes a very long way.

The perfect summer refreshment, "Mamma Mia!" is a joyful, uplifting entertainment that pulls out all the ABBA classics with obvious affection, sugar-coated sparkle, giddy love and forgivable heartbreak. It's typical Broadway musical fare that puts ABBA back on the brain again, performed with dazzling exhilaration by a very talented, attractive cast under Terrence Mann's astute, up-tempo direction. The dancing, choreographed by Mary Ann Walker  and Jessica Walker, is fast, frenzied and breezy. The story is ridiculously sunny and cheery and Lifetime Movie romantic. The set, designed by Tim Brown, is both atmospheric and gorgeous.
"Mamma Mia!" is also the perfect musical to jump start the summer, put a smile on your face, work you into a fevered sweat and send you out through the theater doors on a real sugar high like no other. 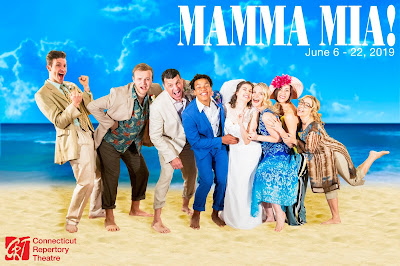