From the Desk of Jim R, Take 2, Column 187, A Review: "Fully Committed" (TheaterWorks/Hartford) 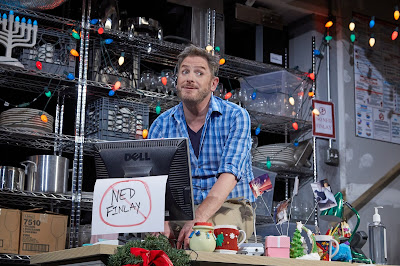 In "Fully Committed," Becky Mode's playful and acerbic attack of New York City's posh restaurant scene, the rich and famous can't seem to get enough of a booked-to-the-max establishment where they are willing to pay a fortune for molecular gastronomic cuisine that Yelp and Open Table are raving about and Gwyneth Paltrow has just booked a table for 15 with demands of a specially prepared tasting menu with "no-fat, no-salt, no-dairy, no-sugar, no-chicken, no-meat, no-fish, no-soy, no-rice, no-foam and no-corn." Even the light bulbs must be changed to "no-glare" before her arrival.

This faddishness and pretentiousness is dealt with on a daily basis by Sam Callahan (called Sam Peliczowski in other versions of the play), an unemployed actor who is left alone to man the non-stop ringing phone lines of this high-end restaurant while also dealing with umpteenth interruptions from friends, family, theatrical agents and co-workers clamoring for attention.

How does he cope?
What is his secret?
Can he "kiss ass" unobtrusively and get away with it?
Of course, he can. 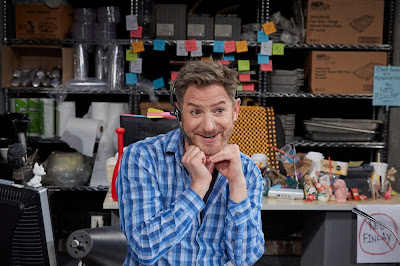 And therein, lies the humor in this hilarious, breezily-paced one-man show that casts the voltage-charged, charismatic Jamison Stern as the perplexed reservation's specialist who is on the verge of being swallowed up whole by customers lobbying for the right table, chefs with big egos and outrageous menu ideas and friends and co-staffers who are completely oblivious to his work-related agonies, frustrations and idiosyncrasies.

"Fully Committed" serves up a tantalizing menu of opinion, paranoia, craziness and sarcasm with enough endless energy and brio to make it the hottest ticket in town. If you haven't seen it, you need to pick up the phone and make a reservation today. If you have seen it, you'll no doubt want to see it again before it ends its run at the Wadsworth.

As penned by Mode, the play itself pokes fun at the foodie culture, egotistical chefs, overpriced menus, celebrities, show-biz wannabes, socialites, name-droppers, out-of-work actors, misguided relationships, family squabbles and convoluted friendships. It also gets laughs from cleverly-orchestrated bits about money, coercion, bribes, threats, ass-kissing, auditions, food-prepping and rich people making ridiculous demands that are completely out of step with life in the real world. The dialogue is fresh, witty, generous, colorful and topical. And the characters themselves, all brought to life by the actor playing Sam, are a marvelous bunch of people who make their presence known in very amusing, delightful, imaginative and demanding ways. 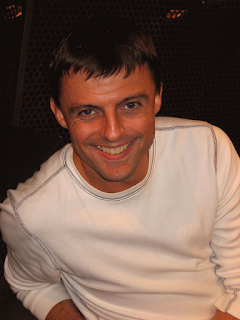 "Fully Committed" is being staged by Bill Fennelly who makes his TheatreWorks debut with this production. As director, Fennelly is well attuned to the manic quickness of Becky Mode's playtext, its varying themes and story arcs, its one-man show conceit, its juggling act madness, its quick-change characters and conversations and its pent-up, over-the-top flamboyance. He also knows how to get a laugh, how to set up a joke, how to pump up the adrenaline, how to take a breath, how to make a point without overkill and how to keep the conversations rolling merrily along in real time without the slightest hint of rehearsal mode, feel or form. Here, everything that happens is real, raw and organic.

Given the fact that "Fully Commited" is a one-man show that rests entirely on the performance of the actor playing Sam (and everyone else), pacing - the right kind of pacing -  is essential in order for the play to succeed. One wrong move and it's over just like that. For this go-round, Fennelly doesn't make one false move. He know what works, what doesn't and how to shape and mold the material in ways that keep it lively, breezy and animated. No matter how crazy things get, everything is brilliantly timed to the millisecond so that nothing gets lost in the translation. Sound cues, lighting cues, dialogue cues, character cues and shifts in movement and staging are flawlessly executed and timed to the beat of the play and its frenzied, insane evolution. It's Mischief Theatre mayhem (i.e., "The Play That Goes Wrong"), but with a cast of one instead of eight. 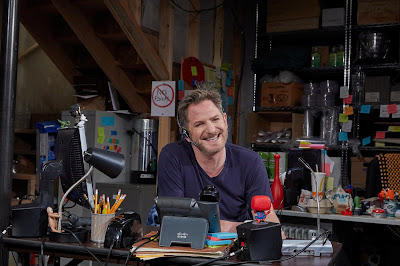 It's a tour-de-force for any actor cast in the role of Sam, the beleaguered reservations guru forced to play nice-nice with the elite set begging for a table at the play's trendy New York City eatery. The casting of Jamison Stern, therefore, is hardly accidental. The actor, last seen as a drag queen in TheatreWorks' hilarious presentation of "The Legend of Georgia McBride, is more than up to the challenge of playing more than 35 different, unseen men and women. It's a full-blown shot of chilled champagne, so to speak, that gives "Fully Committed" its emotional center, its clever visage, its unstoppable chutzpah and its snappy, rip-roaring oeuvre.

Stern, in turn, is bloody brilliant, changing characters, voices, expressions, ticks and mannerisms at breakneck speed. He is assured. He is clever. He is smart. He is quick. He is savvy. And first and foremost, he is an entertainer at the very top of his game juggling phone calls, intrusions, crises, mishaps, hunger pains and other crazed moments that would send an otherwise normal human being off to the psychiatric ward at Bellevue Hospital on 1st Avenue. What's especially enlightening is that Stern never once shows any signs of slowing down. Things are so naturally staged, and conceived, you sit back in amazement  watching Stern make perfect sense out of the manic material put before him. It's a feat he pulls off excitedly with decided, gleeful relish, fortified by an adrenaline rush that keeps "Fully Committed" completely focused with nary a hiccup, a bleep, a sidestep or a glitch.

With summer just about to wind down, this is one comedy you won't want to miss."Fully Committed"  is a comic adventure bookmarked into a zany, outrageous, laugh-a-minute package fueled by well paced dialogue, mayhem and comic situations that elicit non-stop giggles and huge belly laughs in all the right places. With Jamison Stern, front and center, it's a night to remember (or day, if you so choose), infused with that actor-audience euphoria that commands attention in the most craziest ways imaginable. 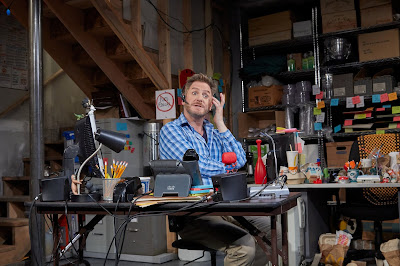 "Fully Committed" is being staged at TheaterWorks at the Wadsworth (600 Main St., Hartford, CT), now through Sept. 1.
For tickets or more information, call (860) 527-7838
website: theatreworkshartford.org


(Note: "Fully Committed"  is the last of three productions to be staged at the Wadsworth  Antheneum while the Pearl Street location of TheaterWorks is being renovated)

Posted by JimRuocco at 9:29 PM