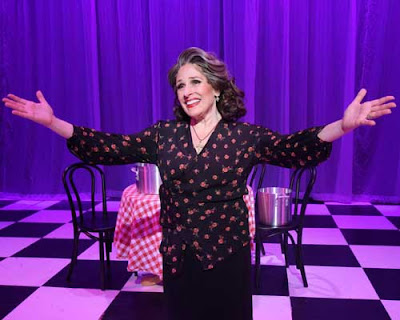 The Italian family portrayed in "Mambo Italiano," the musical adaptation of the popular 2003 film,  is loud, crazy, dysfunctional, reactionary and pushy. And oh yes, very, very loveable.
But when the grandson and the sexy cop step out of the closet and announce that they are not only gay, but  lovers - a big reveal that closes Act I - the outlook and the wacky consequences that follow lead to ridicule, squabbles, embarrassment and tension at the dinner table.

Not to worry, though.
This being a musical, a ray of sunshine intervenes by the end of Act II, signaling an ending, dressed up like an ethnic television sit-com from the 1980's.

Billed as a "big, pre-Broadway new musical where no one comes out hungry," "Mambo Italiano" has plenty of ambition, wit, irony and drama.

It is fun.
It is silly.
It is crazy.
It is conventional.

It is also non-committal, short-sighted and oddly oblivious to the gay lifestyle and all those men and women who fly the rainbow flag high and proudly in all its Technicolor glory. And it's about as gay as "The Wizard of Oz," "The Sound of Music," "Cats" and "Evita." Despite its time frame - the year 2000 - gay men were not as closeted or as insecure as this musical purports. Nor were they very innocent about jumping in and out of bed with one another.

Regardless, there are laughs galore, songs galore and an ensemble cast of exceptional actors and singers who deliver the goods, sells the goods and keep you happily entertained despite the musical's misgivings and shortcomings. 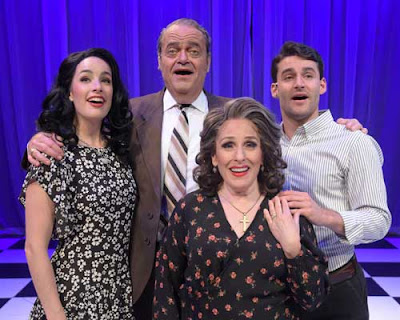 Staging "Mambo Italiano" is Tom Polum whose Westchester Broadway Theatre credits include "Phantom," "Funny Girl," "Grease," "Carousel," "Hello, Dolly!" and "Oklahoma!"  Working from a play script that he co-authored with Jean Cheever, he attempts to bring dazzle, exhilaration and joy to this production. He also strives to create a family-friendly environment where smiles and good cheer are commonplace and anything offensive or PG-13 is left offstage so as not to break the show's carefree, happy spell.

There are cheeky one-liners. There are tears. There is excitement. There is pasta. There is home-made spaghetti sauce. There is meatballs. There is Italiano, frontwards, backwards, sideways, left, right and center. There is a real sense of family. There is familial commitment. No one looks lost. No one lets their guard down. With Polum pulling the strings, every cast member has great fun bringing the musical story of "Mambo Italiano" to life. Even when the dialogue isn't up to par, he keeps things spinning merrily along from scene to scene, song to song and act to act. At the same time, he's a little over cautious as to what he can do and cannot do, a conceit that often weakens the play's premise and lessens its credibility.

This being a musical where two men are gay and very much in love, there is nothing really in the actually story to support that conceit except a line or two of dialogue. They don't kiss. They don't hug. They don't embrace. They don't flirt. They don't  play with each other's hair. They don't touch. They don't have sex. They don't finish each other's sentences. So why should anyone care if they stay together, break up, go their separate ways or piss off their very different families. The addition of a non-sexual bed scene - played for laughs with the relatives paying a surprise visit on the romantic duo - could not only liven things up, but add fuel to their uneven, one-note romance. 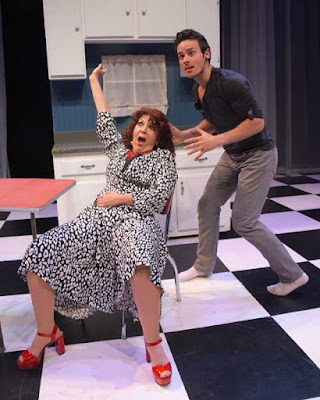 The musical score for "Mambo Italiano" has been written by James Olmstead (music) and Omri Schein (lyrics). It contains 24 songs. They are "Italia," "Famiglia Italiana," "Maria's Wish," "Italia (Reprise)," "Nino," "Yes, Girl," "Space," "Space (Reprise)," "The Lunetti Code," "Mama's Cannelloni," "Before You," "A Simple Family Dinner," "The Dream," "All I Need Is You," "Mama's Cannelloni (Reprise)," "Hammonton, New Jersey," "Yes Girl (Reprise)," "Before You (Reprise)," "Read Between the Lines," "Family," "Il Processo! (The Case)," "And Mama Would Dance" and "Famiglia Italiana (Reprise)." "Mambo Italiano," the 1954 song hit, written by Bob Merrill for Rosemary Clooney,  is used during during the Act II finale.

Musically, the score is original, entertaining, pleasant-sounding and fun. Nothing earth-shattering in the musical theatre vein - just songs that thrust the action forward and songs that are exactly right for the specific characters chosen to sing them. Many of them - "Italia," "Famiglia Italiana," "Mama's Cannelloni," "Space," Family," to name a few - are attuned to the feel-good Italian landscape of the piece and naturally evoke the right emotion, intent, drive and connection. 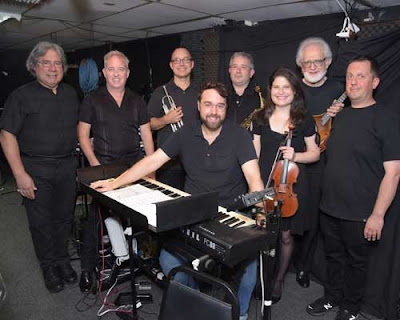 Nonetheless, there are a few problems. "The Dream," for example, which opens Act II, is a direct rip-off of "Teyve's Dream" from "Fiddler on the Roof." The song, the staging , the intro, the dialogue and the addition of a menacing, towering character similar to that of Fruma-Sarah, cries "Fiddler on the Roof " at every single turn. If this number is to remain in the show, the writer's need to include a line or two that explains why they are spoofing "Fiddler" and why the dream itself is similar to the one Teyve imagined and told to a frightened Golde. Elsewhere, a song or two is needed to flesh out the Nino/ Angelo love story. And "Mambo Italiano" could greatly benefit from a much larger ensemble and some dazzling  new production numbers that cry "big, Broadway musical."

"Mambo Italiano" stars Joy Hermalyn as Maria Barbieri, Bill Nolte as Gino, Alex Drost as Angelo, Alexandra Amadeo Frost as Anna, Diana DiMarzio as Lina, Natalie Gallo as Donna and Zach Schanne as Nino. Everyone is perfectly cast for their respective musical roles, which they deliver most engagingly using the right attitude, charm, angst and theatrical savvy the production calls for.  Vocally, they are in perfect harmony, smartly mastering the melodic qualities of the musical score under Wise's whimsical tutelage. You want singing - great singing. You find that here.

"Mambo Italiano,"  despite its obvious flaws, is lightweight, formulaic musical theatre entertainment. The well-chosen cast - every single one of them - are in fine form musically, dramatically and comically and have the chops to do justice to this obvious work-in-progress. But though things are often fresh and fun, "Mambo Italiano" is hardly ready to makes its New York City debut. It has the makings of something that could viably enjoy a healthy commercial run, but it needs to be a little more aggressive its its treatment of homosexuality and the sexual relationship between its two Italian male lovers. In its present form, it's way too G-rated for a piece that is set 19 years ago and purports to celebrate family, Italian food and same-sex relationships to the fullest, dishing out a menu that is only half-baked and imagined. This is 2019, folks. The very thought of two boys kissing is hardly alarming or offensive. It should be sexy and fun. 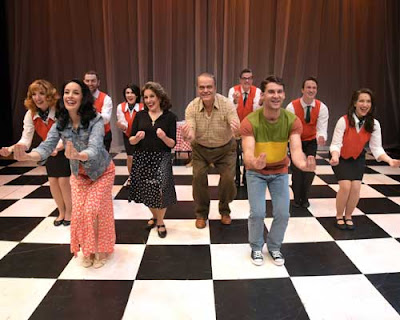 "Mambo Italiano"  is being staged at Westchester Broadway Theatre (One Broadway Plaza, Elmsford, N.Y.), now through September 28.
For tickets or more information, call (914) 592-2222.
website: broadwaytheatre.com
Posted by JimRuocco at 2:46 PM