From the Desk of Jim R, Take 2, Column 191, A Review: "Spamilton: An American Parody" (Playhouse on Park/The Bushnell) 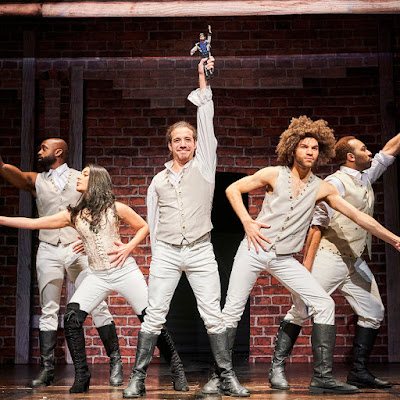 The success of Lin-Manuel Miranda's hot-shot Broadway musical "Hamilton" is the primary target for Gerard Alessandrini's "Spamilton: An American Parody," a shrewd, observant satire that gleefully takes shots at Miranda and his big, expensive musical opus with gags, music and wordplay that escalates into an utterly transfixing work that's meticulously planned, amazingly acted and brilliantly executed.

"Spamilton" and its giddy, farcical mechanics function impeccably in this laugh-out-loud send up chock full of unpredictable invention, bullish motivations and tetchy eccentricity. Like the "Forbidden Broadway" series, which is also the brainchild of Alessandrini, it comes at you at breakneck speed, reveling in its unbridled mayhem, originality, camp and chutzpah.

Staging the 80-minute parody ("Spamilton" is performed without an intermission), Alessandrini, who also wrote the book, crafts a polished, acerbic musical comedy that never once looses sight of its wicked and wild origins. As director and storyteller, Alessandrini, maps things out perfectly always knowing when and how to set up a punchline, when to amp up the craziness, when to stop and let the material breathe, how to move his cast about with comedic zing and flourish and how to let a musical number work its magic, catch you off guard and plunge you into absolute hysteria whenever the right moment strikes. 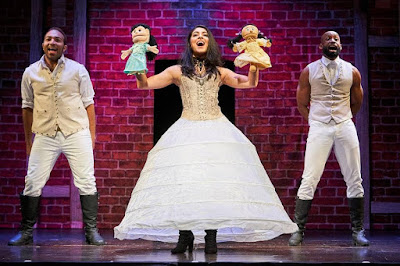 In keeping with tradition, "Spamilton" lambasts "Hamilton" with playful acidity and lampoons several other Broadway musicals, movies and TV shows with sheer, unadulterated pleasure, the kind that produces loud belly laughs, screams and manic reactions from those audience members who live, breathe, eat and sleep theatre, 24-7. In no particular order, the 2019 production of "Spamilton" pokes fun at "Cats," "Sweeney Todd," "West Side Story," "The Fresh Prince of Bel-Air," "Mary Poppins," "Mary Poppins Returns," "Gypsy," "Into the Woods," "Rent," "Annie," "Camelot," "Spamalot," "Miss Saigon," "Charlie and the Chocolate Factory," "The King and I," "The Lion King," "Wicked," "The Music Man," "Man of LaMancha," "The Book of Mormon," "Guys and Dolls," "In the Heights," "Hello, Dolly!" "Avenue Q" "Kinky Boots," "Harry Potter and the Cursed Child," "The Cher Show" "1776," "Mamma Mia!" "Matilda," "Hedwig and the Angy Inch," "La Cage aux Folles," "Company," "Sunday in the Park With George," "Cinderella," "Assassins," "La La Land," "Yentl," "The Phantom of the Opera" and "Aladdin." 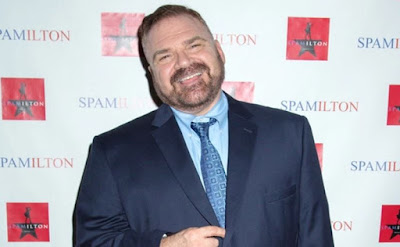 This, being a musical of sorts, Alessandrini, isn't one to mess around with the show's original conceit or its rallied, over-the-top musicality. Nonetheless, minor changes are often necessary to keep the production fresh and up-to-date.
Since its off-Broadway debut in July, 2016 at the Triad Theatre, the musical score for "Spamilton" has been revised and revised to reflect the changing times and the ever-changing Broadway line-up of plays and musicals.
The 2019 edition contains the following musical numbers: "Lin-Manuel as Hamilton," "Aaron Burr, Sir, Nervous-er," "His Shot," "Look Around (The Schuyler Puppets)," "Lin-Manuel's Quest," "Ticket Beggar Woman," "Straight Guy's Winter's Prom," "Straight is Back," "What Did You Miss?" "Ben Franklin, Sondheim & Lin-Manuel," "Daveed Diggs- The Fresh Prince of Big Hair," "Ticket Beggar Woman #2," "Liza's 'Down With Rap," "Ticket Beggar Woman #3," "In the Hype," "Book of No More Mormons," "Broadway Assassins," "Cool Duel," "Who Lives, Who Dies, Who Cries," "Lin Manuel's NYC," "The Film When It Happens" and "Encore: Our Shot."

At the piano, musical director Curtis Reynolds gives "Spamilton" a powerful pulse and rhythmic beat that lets the music snap, crackle and pop in typical parody fashion. Since the action is non stop, timing is everything here. One wrong move, one wrong beat, one halt in the proceedings and it's over. That said, Reynolds captures the music and comedy of the piece with refreshing exuberance, wit and style. The singing, the harmonies, the rapping, the quick changes in tempo, the humor and the drama are marvelously conveyed by the entire cast under Reynolds' tutelage. In spoofing "Hamilton," choreographer Gerry McIntrye delivers a comedic homage that humorously lampoons the big-act musical, its dances, its staging and its key performers with painstaking accuracy and dazzle. He also has great fun providing dance steps for the show's sure-fire roasting of such popular hits as "West Side Story" and "In the Heights," among others. 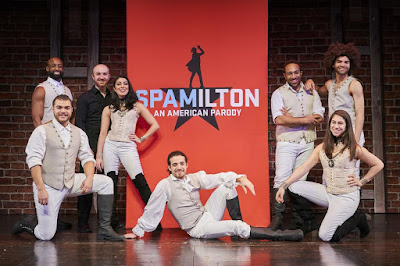 "Spamilton" stars Adrian Lopez as Lin-Manuel, Datus Puryear as Aaron Burr and Leslie Odom, Jr., Paloma D' Auria as the Leading Ladies, Chuckie Benson as Benjamin Franklin, George Washington and Others, Domenic Pecikonis as Daveed Diggs and Others and Brandon Kinley as King George III.
Everyone is suitably cast for their musical, dramatic and comedic roles, which they deliver most engagingly using the right mindset for lampooning, coupled with appropriate mischief, attitude, charm, angst, camp and hysteria. Vocally, they are in perfect unison, smartly mastering the melodic drive and heartbeat of the musical score. And comically, they are masters of their craft with comic timing that is impeccable.

A fast-moving spoof that ridicules the non-stop craziness of live theatre and theater life with jokey aplomb, "Spamilton: An American Parody" pulls you into its taut, dastardly tomfoolery with enough goofiness, cheek and earnestness to knock you on your ass, slap you in the face and leave you begging for more. Its cutting-edge lampooning draws heavily on the already-proven "Forbidden Broadway" formula with side-splitting results and costs a helluva lot cheaper than a fourth row center orchestra seat on a Saturday night to the real "Hamilton" on Broadway with a $1,4999 price tag. 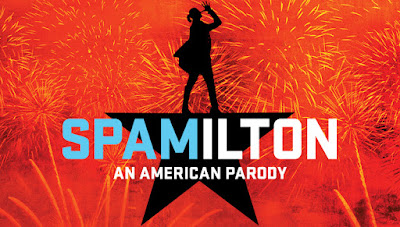 The Bushnell and Playhouse on Park present "Spamilton: An American Parody" at Playhouse on Park (244, Pard Rd., West Hartford, CT), now through September 8.
For tickets or more information, call (860) 523-5900.
website: playhouseonpark.org
Posted by JimRuocco at 12:20 PM