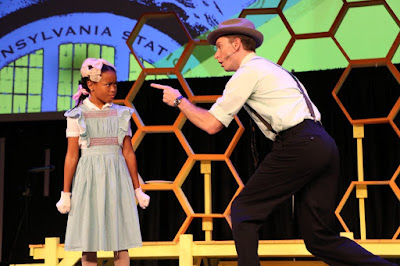 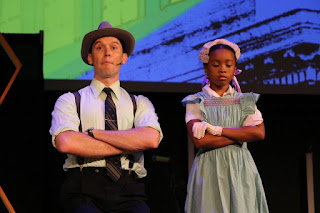 Welcome to the world of "Bye, Bye Birdie," the musical story of a heartthrob singer who gets drafted into the army, but not before he kisses one lucky girl goodbye on "The Ed Sullivan Show," much to the delight of anxious, spellbound female fans all across America who nearly faint or scream (or both) whenever someone mentions his name or simply gush and drool should they be lucky enough to see him perform "LIVE."

Originally created to parody the real-life Elvis Presley and his draft notice into the army in 1957, the two-act musical is intended as feel-good fun with plenty of justification for its effortlessly cute and sunny concept, its music, its songs, its dancing and its cotton candy script.

In New Paradigm Theatre Company's brash, exhilarating, colorful revival of the popular 1960 Broadway musical, this conceit is unleashed with such passion, euphoria and professionalism, the "Wow!" factor of it all creates a vibrancy and track-driven urgency that's not only delivered in flash-bang-wallop style, but one that is lots and lots of sheer, unforgettable fun. 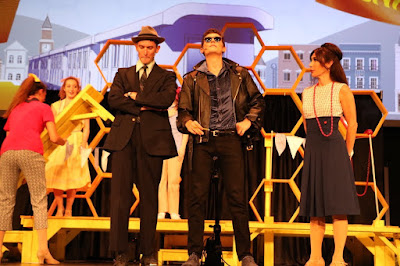 Everything is exactly right in this musical confection that is chock full of effervescent energy and determined zeal and populated by a cast of professional and non-professional actors, singers and dancers who unite with perfect synchronization to perform this fearless, merry-go-round entertainment with the kind of fitting exuberance and dash it demands.

This production of "Bye, Bye Birdie" is being staged by Courtney Laine Self who recently directed and choreographed "Fun Home" at Millbrook Playhouse and "All Shook Up" at the Hartt School. Completely akin to the mechanics, the structure and the mindset of musical theatre from way back when, Self crafts an outstanding, cheery welcome revival that is clean and slick, joyful and tuneful and freshly minted to effectively make it well worth the journey back to 1958, Sweet Apple, Ohio.

Her interpretation not only captures the fever pitch frenzy of teen/pop star hysteria from the Elvis Presley/Ricky Nelson/Fabian era, but effectively sheds new light on the big, overstuffed book stage musical of yesteryear by using modernistic parallels and buoyancy that make it sing and dance even more magnificently. This "Bye, Bye Birdie" never once shows it age (the original production opened on Broadway with Dick Van Dyke, Chita Rivera, Susan Watson, Paul Lynde, Dick Gautier and Kay Medford in leading roles), misinterprets its original conceit, disrespects the characters and their  unabashed innocence or Michael Stewart's playful and twirling scenario. 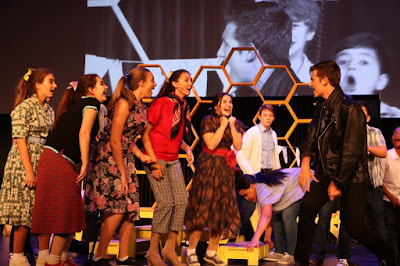 Doubling as the show's choreographer, Self creates eye-popping song-and-dance numbers that pay tribute to the show's rock and roll craze, its spirited teen angst and mayhem, its pubescent fantasies, it's light-hearted innocence and the youthful, excited verve that was the 1950's. Things are lively. Things are well-honed. Things are electric and lyrical. There are also moments when the actors and dancers express their emotions as if playing the actual music with their bodies.
Elsewhere, Self also preserves the show's original dance numbers that were created for the show's star Chita Rivera on Broadway. Whereas most productions delete these choice, important dance numbers, here they are preserved and reinterpreted in bold, invigorating fashion that add nuance and color to the musical. There's also a percussive insistence and elegant athleticism about them that Self grounds with stunning dash, drive and versatility.

The musical score for "Bye, Bye Birdie" - an intoxicating mix of memorable moments that pulse, strike and gleam with timeless familiarity - is the brainchild of Charles Strouse (music) and Lee Adams (lyrics). In working order, the two-act musical contains 24 musical numbers: "An English Teacher," "The Telephone Hour," "How Lovely to Be a Woman," "Put On a Happy Face," "A Healthy, Normal, American Boy," "Penn Station to Sweet Apple/We Love You, Conrad!" "One Boy," "Honestly Sincere," "Hymn for a Sunday Evening," "One Hundred Ways (Ballet)," "One Last Kiss," "What Did I Ever See in Him?" "What Did I Ever See in Him (Reprise)," "A Lot of Livin' to Do," "Kids," "Baby, Talk to Me," "Spanish Rose," "The Shriner/Veteran's Ballet," "A Mother Doesn't Matter Anymore," "Kids" (Reprise)," "Ice House Livin', " "An English Teacher," "Rosie," and "Bye, Bye Birdie (Finale)." 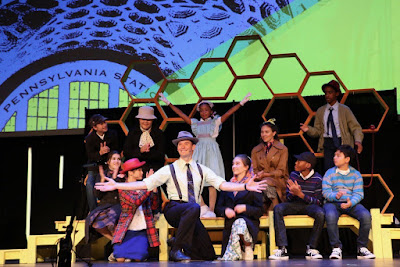 Musical director Chris Coogan and his exceptional orchestral team (Mike Mosca, Jim Andrews, Kristin Huffman, Louise A. Baranger, Clay Zambo, Jackie Chasen, Peter Hohmeister), tackle the musical score with an excited flourish and vitality that heightens the show's already-proven musicality. The crowd-pleasing tunes unfold with a tingly, elucidated wallop more in sync with today's musical theatre that its nostalgic, old-fashioned, book musical past. The show, of course, still brims with its own rigorous life force - visceral, sweet and bubbly, melodic, in the moment - but the overall effect is much more moving and catchy, smartly attuned to the action, the concept, the story arcs, the characters and the varying themes and undercurrents and repercussions at hand.

As "Bye Bye, Birdie" evolves, Coogan produces a clear, pure sound of tremendous depth and harmony with his very large ensemble cast, all of whom possess abundant vocal qualities, insight, stamina and energy. With harmonies worked out to the very last detail, the choral blending is immaculate, expressive and impressive as are the individual solos and duets. As the band plays on, the crispness and precision of the Strouse/Adams score is cogently conducted and integrated with breezy, masterly playing that is afresh and absorbing. There's also an organic, swift urgency to the proceedings that brings added fuel, detail and excitement to the show's musical high points, of which there are many. 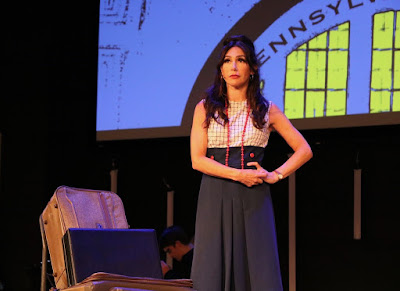 As Rose Alvarez, a part originated by Broadway icon Chita Rivera in the original New York stage production of "Bye, Bye Birdie," Jamie Karen is bright, witty, sassy, magnetic and alluring. It's a dream role for any actress and Karen is pure magic from start to finish. She dances up a storm in solo numbers that are beautifully choreographed to complement her dance and rhythmic finesse and leading lady status. Acting wise, she's real, honest and independent, which makes her performance breezy, entertaining and entirely watchable. Vocally, she's nails every single song Rose is given to sing with a natural confidence, range and believability. Patrick Heffernan, in the role of Albert Peterson, makes you completely forget about Dick Van Dyke from the 1963 motion picture and the 1960 Broadway production. Like Karen, he has plenty of personalty and charisma to boot, but he dances to his own musical beat which makes his performance even more appealing. He's funny. He's original. He's musical. He's clownish. He's charming. He's a product of the times. He's a delightful addition to every scene he's in. He sings beautifully. He dances with the confidence and showmanship the part calls for. And he's the perfect gentlemanly match for his attractive female co-star.

Randye Kaye gives a standout performance as Albert's mother, Mae Peterson. Her nagging, complaining and numerous attempts to mollycoddle her son are a genuine source of merriment as is her showstopping comic solo "A Mother Doesn't Matter Any More." In the role of Kim MacAfee, Laura Jean Spineti is charming, winsome, cheery and free-spirited, which is exactly what the part calls her. Her radiant soprano voice is strong and vocally perfect, as evidenced in "How Lovely to Be a Woman," "One Boy" and "What Did I Ever See In Him." If anyone is doing "Oklahoma" in the near future, Spineti would be the ideal Laurey Williams. Think what she could do with those lush, melodic Rodgers and Hammerstein songs. Barbara Distini is absolutely fine as Doris MacAfee, Kim's mother.
She hilariously hits the satirical mark on her Donna Reed-like character while Bailey Jamieson, as Hugo Peabody, has plenty of pent-up teen angst as Kim's steady boyfriend Hugo Peabody. 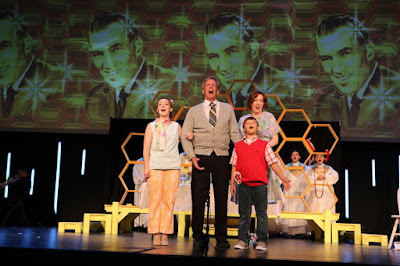 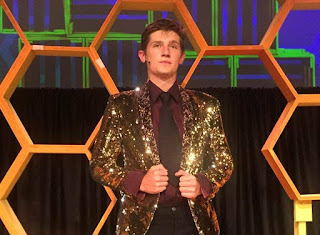 Conrad Birdie is clearly meant to be Elvis, but in this version, Cameron Burrill plays him like Aaron Tveit as Danny Zuko ("Grease") and Tucker Smith as Ice ("West Side Story"), mixed with a honest, narcissistic, manufactured, blank-slate pop star allure that is both comical and perfectly in sync with today's social media idolization. Mark Holleran portrays Kim's father Harry MacAfee with a decidedly funny, straight-man comic flourish that works most advantageously during "Hymn to a Sunday Evening," which he owns, lock, stock and apple, Sweet Apple, that is. As Randolph McAffee, Kim's young brother, Nathan Horne is one of those charismatic child actors who's a whirlwind of energy, personality and talent which should carry him off to Broadway and television sit-com land in the not too distant future. And wait till you hear him sing in "Hymn to a Sunday Evening" and the "Kids" reprise. What a voice. Simply amazing!

One of the best Ursula's ever, Aimee Turcotte fully inhabits her comic characterization of a lovesick teenager who completely idolizes Conrad Birdie. Her comic timing and line delivery (let's not forget those ear-piercing screams) is champion ready from the get-go. As the Sad Girl who needs cheering up in Albert's playful solo, "Put On a Happy Face," Jaiden Jackson is an amazing young performer.  She dances like a dream. She is charming and personable. And throughout "Bye, Bye Birdie" she has that star quality about her that you can't help but notice whenever she's on stage.

The sweet naivete of yesteryear, mixed with inspirational twists about rock and roll, teen idols, boy-girl romance and life in the suburbs, make this "Bye, Bye Birdie" a dazzling, musical treat. Brimming with just the right amount of charm, nostalgia and good cheer, it is period-appropriate fun with an exceptional, talented cast - all ages, all types - who brilliantly satirize the 1950's mindset, offset by a manic energy and freshness that is exhilarating and never once saccharine. 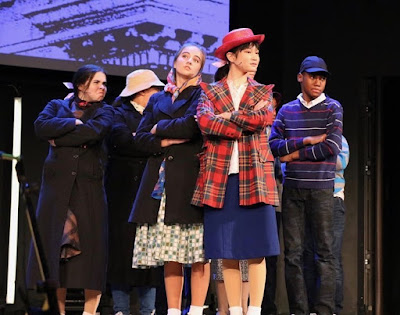