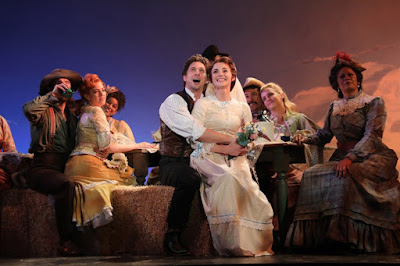 One of the continual surprises of Rodgers and Hammerstein's 1943 musical "Oklahoma!" is its marvelously crafted, influential story, its big, old-fashioned musical score, its savvy, satisfying characters and its uncanny ability to keep its already excited audience lost in the prairie for nearly three hours.

And, when it works perfectly....case, in point....the Goodspeed Opera House's lush, compelling revival....it is not something you'll likely want to miss.

This "Oklahoma!" is gorgeous, confident, cheeky, sweeping, dangerous, sexual and dazzling. Everything about it is crisp, clear, creative and thrilling.
All this for a show that's been in existence for 74 years, and counting. What's exciting about this particular production is that it completely avoids the stereotypical conventions associated with standard book musicals of yesteryear. This "Oklahoma!" stands tall and proud on the Goodspeed stage. It is zesty. It is colorful. It is bawdy. It is robust. It is lively. It is passionate. It is real. It is raw. It is honest.

Yes, it was first performed on Broadway in 1943. And, yes, there have been hundreds and hundreds (or should I say thousands) of revivals all over the world. That said, this "Oklahoma!" is decidedly different. And therein, lies its complete enjoyment. 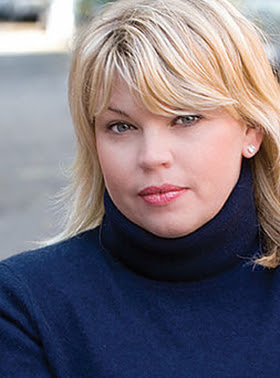 As envisioned by director Jenn Thompson, this revival has a sense of pride, equality and entitlement to it. The story, of course, remains the same (cowboy Curly McLain romantically pursues farm girl Laurey Williams in the Oklahoma territory of the early 1900s)  But with Thompson at the helm, this "Oklahoma!" grows into something much more profound, curious and timely. Here, you get real honest-to-goodness people who live off the land, work hard for their money and look toward the future with newfound hope. They also just happen to sing beautifully and dance beautifully. 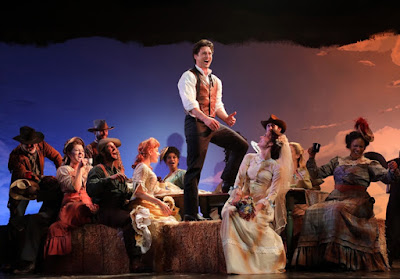 Staging the two-act musical, Thompson always knows exactly what buttons to push. And never once, does she stop the production dead in its tracks. Set changes, musical numbers, dances, sound and light cues, are expertly timed without hesitation. Having the actors enter and exit up and down the aisles of the actual theater (when necessary, that is) gives the production a three-dimensional feel and intimacy that works to full advantage
She has also cast the entire production with a group of actors and actresses who look and act as if they actually grew up in Oklahoma, circa 1906. This, in turn, gives the musical a more honed, realistic aura that other productions couldn't quite pull off. Thompson also draws us deep into the psyche of her characters, their story and their songs unobtrusively. It's a directorial conceit that works most advantageously and assimilates particular hindsight into our experience of the entire show. 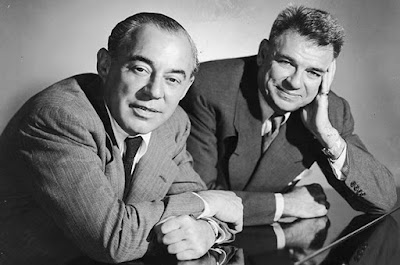 Rodgers and Hammerstein's resourceful, playful and completely exhilarating musical score remains the high point of Goodspeed's splendid revival. Make no mistake about it, the songs themselves ("Oh, What a Beautiful Mornin'," "The Surrey With the Fringe on Top," "Out of My Dreams," "People Will Say We're in Love," "Many a New Day," "Pore Jud is Daid," "Oklahoma!") are musical theater classics and then some. Most people in the audience know them and love them. Some, in fact, can't resist the urge to sing along with the cast or flip through their playbill anxiously awaiting the start of yet another one of their favorite "Oklahoma!" songs. And that's all fine and dandy. Indulge! You betcha!

But this "Oklahoma!" takes things way beyond the conventions of old-fashioned musical theater. Instead, musical director Michael O' Flaherty puts his own definitive spin on the music and offers theatergoers something much more earthy, focused, character-driven and in-your-face. No candy floss. No camp. No nostalgia. No honey-dipped gooeyness.

Every one of the songs is completely realized and envisioned to let you see and hear it all the more clearly. Yes, some of the dialogue prompts the next song cue (that can't be helped), but everything in this revival is justified and sung with real feeling and purpose. O'Flaherty and his brilliant musical team retain "Oklahoma's" considerable charm and warmth, but adding additional fuel and pioneer spirit to the proceedings gives the production additional angst, drama, sexuality and level-headedness. There is that ray of sunshine, now and then, but it's hardly nostalgic or one-note. It's completely realized with considerable musical depth. 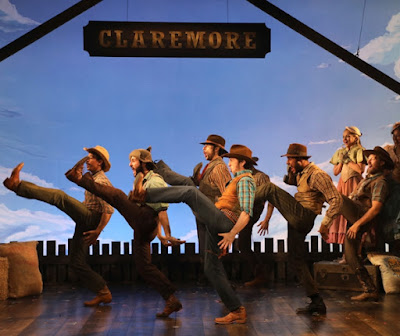 Katie Spelman's choreography is gritty, dramatic, vigorous and frenzied. She too avoids the standard conventions of typical musical theater choreography by offering something much more realistic, rustic and indicative of the show's surroundings, its characters, its pioneer flavor, its survivalist undercurrents and its darker elements. As "Oklahoma!" evolves, every one of her dances vibrates with a robust tenacity, beauty, exuberance or restlessness that makes it confident and three-dimensional. 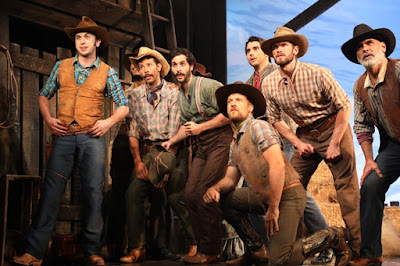 The testosterone-fueled ''Kansas City,'' for example, robustly recreates one-man's colorful journey to the big city, backed by plenty of male dancing-chorus aggression, heat and camaraderie. "Many a New Day," in turn, evolves from pretty ditty about a certain fella to an all-too valuable lesson on how to deal with and handle the available men of the "Oklahoma!" story. Spelman also brings a dangerous electricity to the wildly exuberant and jaunty Act II opening "The Farmer and the Cowman,'' which celebrates the bitter rivalry between the local farmers and the cowboys. 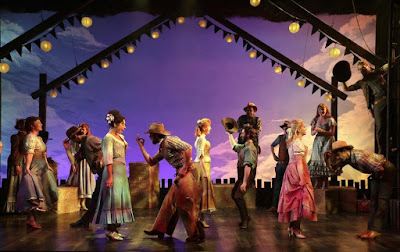 The 15-minute "Dream Ballet," which portrays Laurey's troubled feelings over the two men in her life (Curly and Jud), is brilliantly reinvented for the Goodspeed stage. Performed by the entire "Oklahoma!" cast, this classic ballet sequence, offers theatergoers a fresh, uniquely different take on the original piece, created by Agnes deMille for the original 1943 Broadway production. It still, of course, adhere's to the concept and illusion of the original, but as devised by Spelman, it is even more haunting, emotional and nightmarish than that of previous incarnations. It is so hypnotic and tantalizing, you actually feel as if you've been thrust from your seat at Goodspeed and into Laurey's troubled, impossible dream. 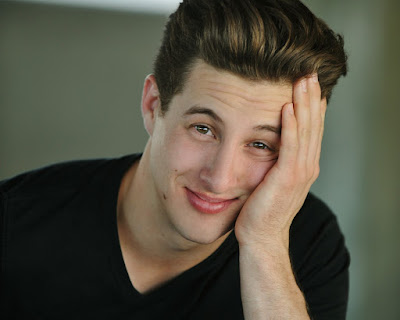 In the role of Curly, Rhett Guter exudes just the right amount of charm, charisma, strong-will and sexiness, which is exactly what the part calls for. His characterization also benefits from a natural honesty and countrified persona that always keeps his Curly rooted in reality as "Oklahoma!" evolves and surprises. 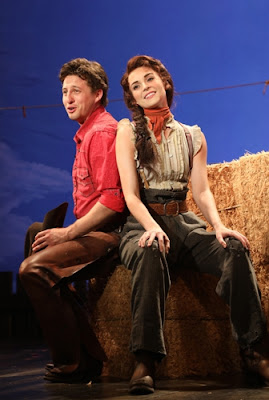 Vocally, he clearly knows what musical theater is about. "Oh, What a Beautiful Mornin' " and the rousing title tune, are carried off with real verve and sunny enthusiasm. His slick interpretation of "The Surrey With Fringe On Top" has a timeless luster about it. "People Will Say We're in Love," his romantic duet with Laurey, is impressively romantic, comfortable and compassionate. Make no mistake about it, Guter and his very attractive co-star are the real deal. They exude a honeyed warmth and confidence that makes their budding stage romance the emotional focus of the musical without any sort of calculation. 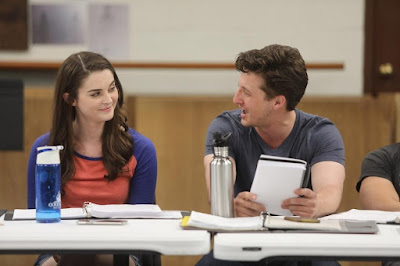 Samantha Bruce's Laurey is something of a revelation.....and, so much more.
The innocence and wholesomeness that once personified this character has been replaced with a tomboyish spunk and drive that makes her Laurey more human, more real and more passionate.
This, in turn, adds plenty of fire and spark to her already mentioned dalliance with the handsome Curly and her growing uncomfortableness around Jud. Bruce's Laurey also has a wonderful sense of independence about her, similar to that of Molly Brown, Meredith Wilson's "unsinkable" pioneer woman.

Elsewhere, her song style and delivery is spunky, lusty, beguiling and resplendent. When singing "Many a New Day," "People Will Say Were in Love" and "Out of my Dreams," her take on all three musical numbers is rich in emotion and believability. It also comes completely from the heart.
. 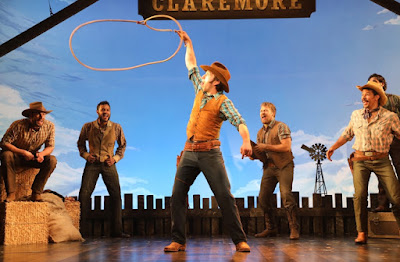 Jake Swain's wide-eyed, effervescent Will Parker quickly mandates the audience's affections with the beautifully sung "Kansas City," backed by the "Oklahoma!" male chorus. His dancing is wildly frenetic and jubilant, which is exactly what this signature piece calls for.

The actor also reflects his character's pioneer spirit, his love of the land and a dizzying freedom and lust for the opposite sex. In Act II, he has great fun with "All Er Nuthin'," his perfectly timed comic duet with Ado Annie about marriage, love, flirtation and romantic bliss. It's simply irresistible . 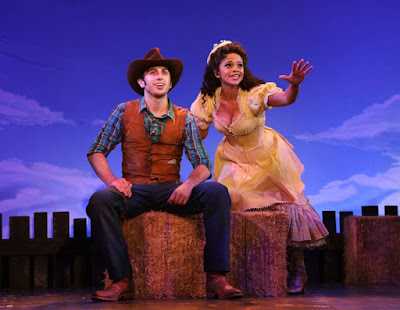 Gizel Jimenez executes all the right moves as the boy crazy Ado Annie. She's funny. She's spirited. She's magical. She's ever-willing. She's adorable. Her comedic "I Can't Say No," a colorful, comic-tinged song that reveals her unbridled delirium over men (all men, that is) is one of the evening's highlights. Jimenez is so much fun to watch, one eagerly awaits her every entrance. 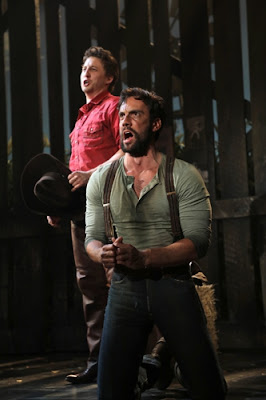 As Jud Fry, Matt Faucher's rich, deep baritone voice lends itself nicely to "Pore Jud is Daid" and the passionate, visceral "Lonely Room' solo about Jud's desire to win Laurey over. It's a powerful moment, guaranteed to send shivers up and down your spine.

Dramatically, Faucher superbly projects the image of a disturbed, lonely and misunderstood man tortured by a troubled past and love that eventually prompts his untimely doom. 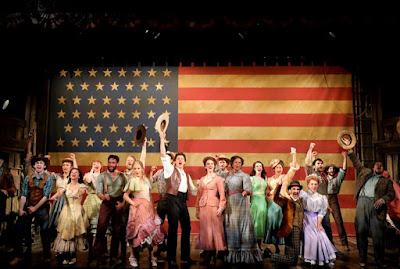 In conclusion, the overall excellence of this "Oklahoma!" should satisfy anyone with a penchant for a big Broadway musicals chock full of memorable songs, a captivating script and a very happy ending that will never go out of fashion. It is also a dazzling, crowning achievement for Goodspeed.

Posted by JimRuocco at 1:18 PM