From the Desk of Jim R, Take 2, Column 35, A Review: "And Then There Were None" (Warner Stage Company) 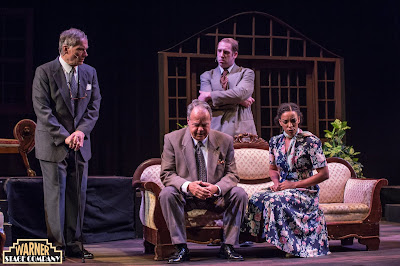 In Agatha Christie's deliciously wicked "And Then There Were None," a throng of not-so-typical house guests are invited to Soldier Island, an isolated Devonian escarpment in the United Kingdom purposely cut off from the mainland and just about everybody else.
The host and hostess, of course, are conspicuously absent. There is no telephone. Supplies are limited. The actual invite letters are nondescript. And everyone in the room, including the servants themselves, has definitely something to hide.

Otherwise, there'd be no point to the play. 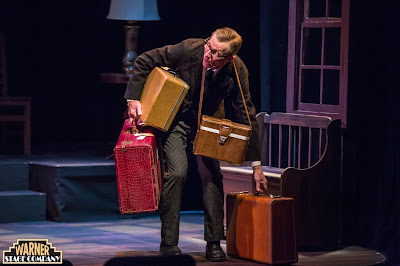 The plot, of course, immediately thickens once a disembodied message accuses all ten of the house's occupants of having actual blood on their hands. Then, the ball drops. It seems everyone in the room is a murderer of sorts. They have been invited to Soldier Island as punishment for their dastardly deeds.
Crikey!
Bloody hell!
Flipping wanker!

So much for cocktails, a candlelit dinner, a mouth-watering dessert and after dinner drinks.
It's not going to happen.
Instead, each of the characters is reminded of their individual crimes, which include children being drowned or run over, an irate husband murdering his wife's lover, a failed medical operation in theater and a couple's negligence over an old woman who died in their care. 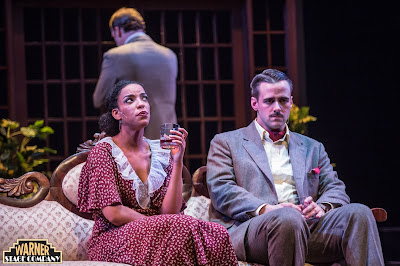 Complicating matters is a nursery rhyme ditty that warns each of the invited guests and house staff that they could be next.

There's more of course, but suffice to say, a point has been made.
Who lives? Who dies? Who's the killer? Who's not dead? 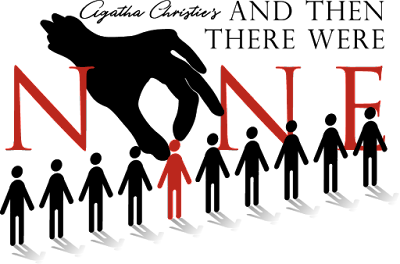 The daunting task of making "And Then There Were None" palpable for the stage without any form of calculation is hardly easy. It can be actually suicidal (no, pun intended) if the director is not privy to the mechanics of the English whodunit, its beastly undercurrents, its jest, its priggish set of characters, its marvelous dissection of the English class (upper, middle and lower), its clues, its red herrings and its ability to taunt and tease everyone who bought a ticket. 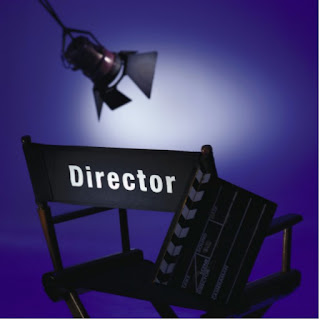 Luckily, for us, The Warner Stage Company put Lynn Paulella Beard in the driver's seat. Not sure whether Beard is a fan of the BBC (the real one, not the creaky, misguided American one), but whatever tricks she has up her sleeve, "And Then There Were None" fascinates, titillates, excites and surprises. It is definitely English in spirit and tone. The way the actors move, stand, sit, observe, enter, exit or express themselves without any dialogue is decidedly English. As is, the way they sip their tea, coffee or hold a glass of drink.
That, in turn, keeps the three-act play firmly rooted on the ground without any flat footing. It also gives the stage proceedings added excitement, zest, appeal and placement within a particular time and period.
First and foremost, this is a whodunit. Beard never once missteps anything. She knows the murder mystery genre, sideways, backwards, front and center. She knows how to build suspense. She knows how to grab you by the throat when you least expect it. She knows how to get a laugh or push you to the edge of your seat.
She also knows how to keep you thoroughly entrenched in the ongoing game of murder created by Agatha Christie herself. 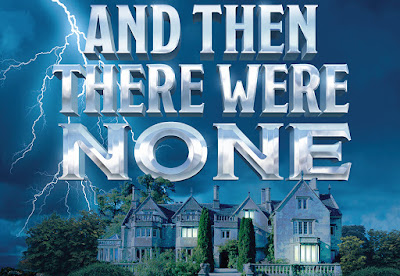 The actual script is rife with backbone, atmosphere, dark truths, backstories, twisty excitement and surprise revelations. There's also a lot of brilliantly executed cheekiness and English wordplay which the cast delivers with amazing splash and brio. Unfortunately the brain dead Torrington audience is surprisingly clueless (at least they were, the night I was there) to this form of English wit and therefore, had no reaction to some very funny passages and one-liners. Or maybe, a pit stop to McDonalds or Burger King for tea much earlier fried their American brain to the point of confusion when faced with figuring out the cheeky mechanics of Christie's convoluted plotting.

If "And Then There Were None" falters, only for a moment or two, it is due largely to the different English accents (or in one case, a complete lack of one) of the on-stage actors. Everyone does their best to act properly English, but, at times, you're not exactly sure which geographic region of the United Kingdom they are from. Or what class or social position they are meant to represent. Still, they sustain their choice of accent throughout the production and never once let it interfere or dampen the whodunit allure of the play. 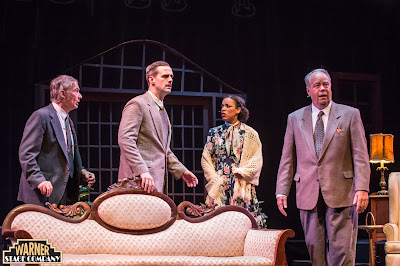 Tony Enright, however, cast in the pivotal role of Dr. Edward George Armstrong, seems to have landed head first in the wrong play. Though Armstrong is purebred Englishman, Enright's characterization is completely American from his mannerisms, stance, mood swings, expressions and line delivery. He makes no attempt to play an Englishman, much less act and speak like one. Perhaps a visit to 27A Wimpole Street could remedy the situation. Or a dash or two of some Harry Potter elixir could be dropped in the actor's whiskey glass before the next performance.

The easiest fix, however, would be a quick reworking of the script.
Upon Armstrong's very first entrance to the house, Philip Lombard remarks, "I say, old chap, you're American."
"Yes, I am," Armstrong says.
"How terrible for you," quips Lombard.
Problem: Solved. 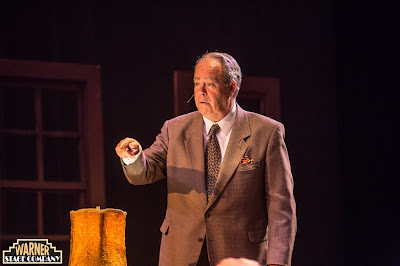 Its not that Enright is terrible. He's definitely not terrible at all. He's a very accomplished and talented actor with plenty of style, stamina and passion.
For story purposes, however, Armstrong must be British and not American. Otherwise, the character looks like he wandered into the wrong play. This is not "The Actor's Nightmare." So, let's get cracking, folks. It's not like script changes haven't been done before in Torrington. Just ask Ingrid Smith, Brooke Tansley, Charlie Tirrell, the cast of "Follies" or the cast of "The Elephant Man." 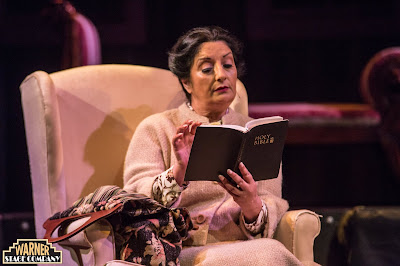 In last season's "The Scarlet Letter," staged by the Vagabond Theatre Company, Thursday Savage's evocative portrayal of seductress Hester Prynne was so heartfelt, so honest and so compassionate, it was impossible to take your eyes off her for a single moment. As Prynne grappled with her demons, her past sins, her uncertain future and the evil town folk who damned her soul straight to hell, the actress unflinchingly tapped into her characters dilemmas so believably, the production, never once lost its focus, its energy or its purpose.

In "And Then There Were None," Savage is cast as the cold-hearted, somewhat reserved Emily Brent, who has lots to hide and eventually ends up paying for her sins. Here, as in "The Scarlet Letter, the actress completely loses herself in the part to the point where she becomes the actual character and the woman named Thursday completely disappears right before your very eyes.

She is dramatic. She is polished. She is clever. She is calculating. She is authoritative. She is everything Brent is meant to be and more. Her definitive, superbly executed English accent is 100 per cent accurate as are her actions, reactions and line delivery.
And as the audience who watch her, we are with her every step of the way until she is knocked off by a lethal injection with a hypodermic syringe. Ouch! 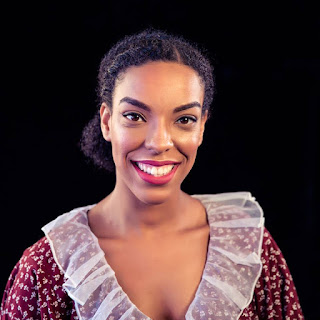 Maytae Harge as Vera Claythorne is a classy, intuitive actress with plenty of spunk, spirit and stage presence. As the plot for "And Then There Were None" unravels and unravels, she always makes the right choices and never once drops characterization or forgets her role in the advancement of the story. She is absolutely fascinating to watch and vividly displays Vera's full range of emotions, choices, responses and motivations. Even when she is just standing there reacting to the other on-stage characters, you wonder what her character is going to do next. Luckily, for us, she appears in all three acts. Her last ten minutes in the production are absolutely brilliant. 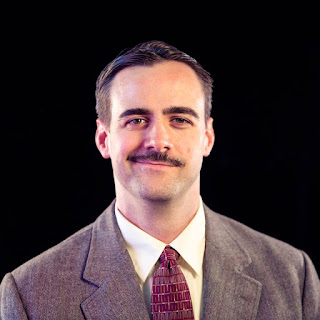 In "Follies," Eric Lindblom, in the role of Young Ben, was completely shortchanged by both director and musical director. Here, it's quite the opposite with Beard in the director's chair. The wonderfully suave and charismatic actor not only plays the part of the dashing Philip Lombard to perfection, but he completely owns it. He never once makes a wrong move. He always knows where to put the focus, how to recite and deliver a line of dialogue, how to observe and react and how to fit neatly into the frame of a whodunit. His costuming, however, is more Torrington Goodwill than Gieves & Hawkes, but a quick wardrobe fix can remedy all that before the next performance. 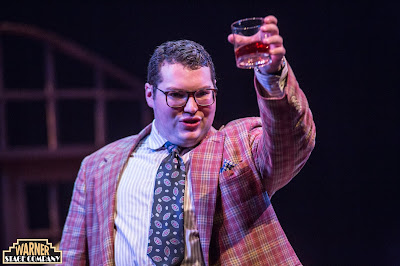 As the flamboyant  and priggish Anthony Marston, Nicholas Bourne is a comic delight who revels in his character's over-the-top outrageousness. Unfortunately, his character is the first to die (drugs are slipped into his drink when no one was looking). But, what a way to go. Bourne's death scene is worthy of a standing ovation in itself. It is so brilliantly executed, from his coughing and choking to his actual fall to the floor, one wishes you could hit replay and watch it again. Simply amazing. 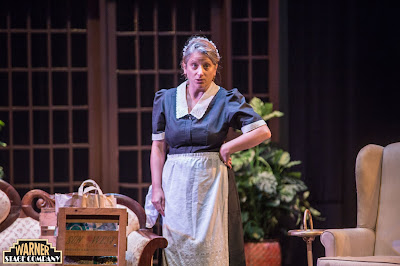 In the role of Ethel Rogers, the caretaker who was brought to Soldier Island to cook and care for the invited houseguests, Lana Peck is so unbelievably English, you'd swear she was plucked from an important BBC One drama and flown over to America on British Airways (first class, of course) to appear in Beard's murder mystery.  Roger Grace, who plays her twitchy husband Thomas Rogers also scores high points for his performance. 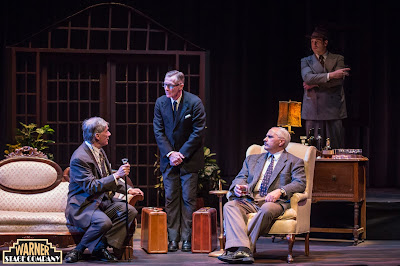 The very personable Payton Turpin (what a great, great name) is completely "spot on" as General Mackenzie, the man who murdered his wife's lover in cold blood. Scott Murphy brings appropriate life and mystery to the role of William Henry Blore. His characterization, his choice of accent and his line delivery is very real and very raw. Mike Zizka, in the role of Sir Lawrence Wargrave, is a commanding and versatile actor who never once strikes a false note. The role of the irascible Wargrave shows him off splendidly. And he makes perfect sense out of his character's cruel intentions in ways that scare, delight and catch you off guard. Then again, that's the point. 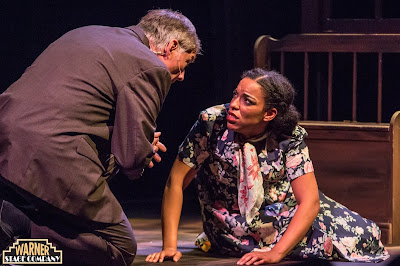 "And Then There Were None" is being staged by the Warner Stage Company at the Nance Marine Studio Theatre (68 Main St, Torrington, CT), now through Oct. 1)
For tickets or more information, call (860) 489-7180.

Posted by JimRuocco at 4:10 PM