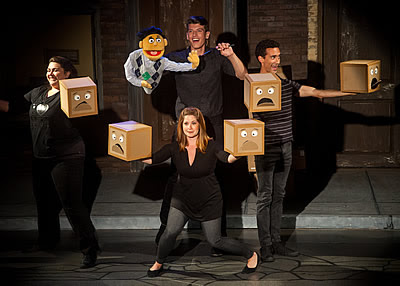 At first glance, the inviting outdoor streetscape for Playhouse on Park's "Avenue Q," backed by video screens on both sides of the intimate stage, resembles that of ITV's "Coronation Street,"' the long-running British primetime soap that began life on telly back in 1960.
Interesting...oh, yes.
Yet there are so signs of Rita, Norris, Gail, Steve or Hilda Ogden once this colorful, uplifting   production begins. Instead, Emily Nichols' resourceful, cleverly-constructed set lends itself nicely to the "Sesame Street" like world of puppet characters named Princeton, Rod, Katy Monster, Lucy, Trekkie Monster, Nicky, and several others. It also houses real-life actors, some of whom, act alone without puppets to bring the deliciously playful and wicked "Avenue Q" to life. 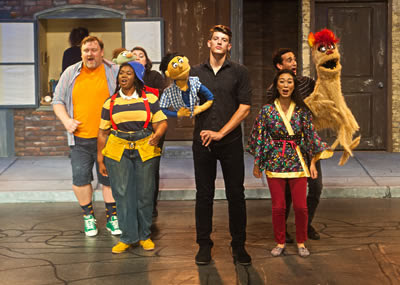 That said, this "Avenue Q" is funny, clever, edgy, polished, devious and gleeful. It is well worth a visit or two and the perfect vehicle to open Playhouse on Park's ninth season, which includes an ambitious line up of productions from "The Diary of Anne Frank" and "Intimate Apparel" to "The Revisionist" and "In the Heights." You won't want to miss a single one.

"Avenue Q" is also a bonus for anyone who buys a ticket: the 13-year-old teen and his giggly date, the first-time theatergoer, the puppet master, the Broadway musical groupie, the bored West Hartford housewife, the starched-shirt husband, the same-sex couple, etc. And let's not forget granny and grandpa, who will have lots of fun. Or either be shocked or delighted by full puppet nudity/ puppet sex right before their very eyes. 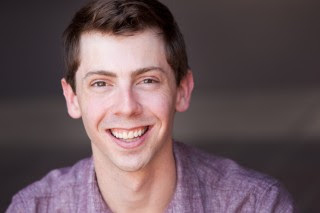 The beauty of this "Avenue Q" stems from director/choreographer Kyle Brand's exceptional staging. This production shimmers with a particular sensibility and ambitiousness that Brand deftly communicates. He not only knows and understands the material well, but takes it way beyond its "Sesame Street" parody status and turns it into something real, raw and honest that everyone in the audience can relate too.
Everything is mapped, plotted and delivered with authority, wit, snap and precision, which, in turn,  keeps this "Avenue Q" upfront and center without any awkward pauses, lapses or confusion. Brand paints a very likeable Technicolor picture that is both playful and witty and very much in touch with its ever-changing  emotions, spirit and surprises. 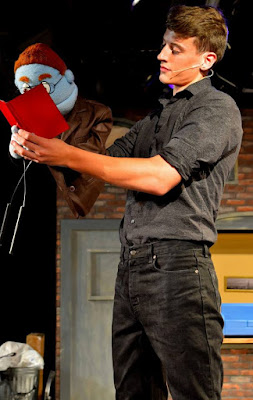 There's a lot going on here. In particular, the puppets and the actors themselves.
Each of the characters is embodied by a colorful, wonderfully designed oversized hand puppet, manipulated by a very visible actor who provides voice, movement and song in perfect synchronization. There are also moments throughout "Avenue Q" when two actors handle the movement of s single puppet while one actor does the voice and the other one (a silent partner, of sorts), simply reacts. It is a creative process that Brand and his team of performers pull off swimmingly. And there's real beauty in seeing how it all plays out on the intimate Playhouse on Park stage. Well done, Mr. Brand.

The "Avenue Q" musical score has been written by Robert Lopez and Jeff Marx. It is delicious, flavorsome, twinkly and tuneful with plenty of justified dash, punch, craziness and rainbow-tinged madness. It's also been well envisioned by the composers without any form of calculation or hesitancy.  Everything that happens is not only perfectly in sync with the on-stage action, but for the actors who sing them and the puppets who engagingly bring the "Avenue Q" songs so merrily to life. 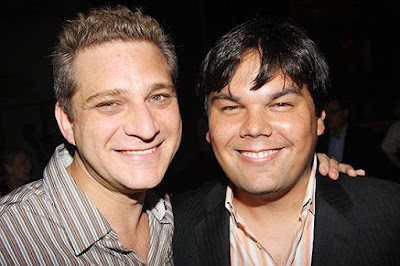 The fun, of course, stems from the nature of the songs and the titles themselves: "It Sucks to Be Me," "If You Were Gay," "The Internet Is For Porn, "I'm Not Wearing Underwear Today," "The More You Ruv Someone," "Schadenfreude," "Everyone's a Little Bit Racist," to name a few. The pungent, detailed, often R-rated lyrics are marvelously wicked, slick, dirty and acerbic, backed by agreeable scoring that commands and demands your attention as "Avenue Q" hits you in the face with its contrasting pronouncements, its sly undercurrents and juicy obscenities that catch you off guard, bring a smile to your face or make you laugh uncontrollably out loud.

Musical director Robert James Tomasulo is a perfect fit for "Avenue Q." Backed by four other talented musicians (Sean Rubin, Nick Cutroneo, Elliot Wallace and Andrew Studenski) ), this quintet makes the music of this particular production bloom and dance with the magic, the style and the grit its creators originally intended. Mix that with the fascination of hearing it for the first time (during intermission many theatergoers remarked that they had never seen or heard of "Avenue Q" before) and experiencing it "live" and you've got something wonderful to embrace and enjoy.

Elsewhere, Tomasulo and company conduct, instruct and guide their seven-member cast through the entire "Avenue Q" score without ever once missing a single beat, note or piece of important music. Every one of the songs is meticulously performed and delivered in the style and manner is was rendered and voiced by actors who wrap their vocal chops around the marvelous score singing in perfect pitch, alone, in a group, or simply with one or two people. The harmonies also blend seamlessly together and well they should under Tomasulo's exacting showmanship. 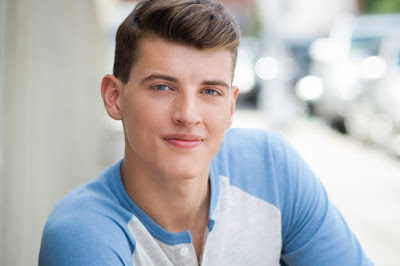 The performances are pure gold, with a dash or two of every color of the rainbow.
The charismatic and boyish Weston Chandler Long, who looks as if he could be the long lost cousin or younger brother of "A Clockwork Orange's" Jonno Davies is perfect for the dual roles of the unworldly Princeton and the repressed, thoroughly confused Rod as well. The different voices, mannerisms and vocal delivery of each character he portrays is absolutely brilliant, as is his body language when manipulating each of the puppets. Musically, his vocals are polished, engaging and completely endearing. So if anyone is doing "Les Miserables" or "Next to Normal," Long would be the ideal Marius or Gabe. 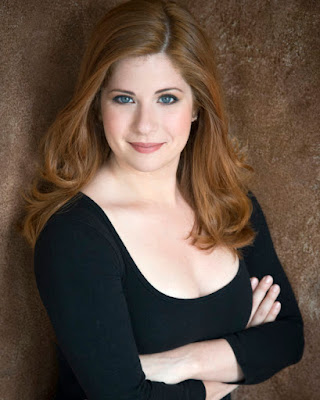 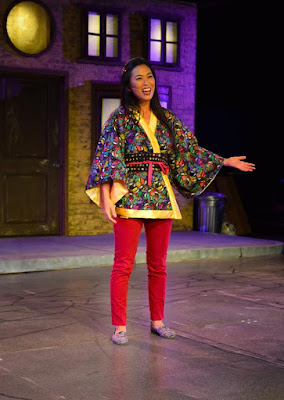 Playing the purposely stereotypical Christmas Eve, a Japanese therapist whose patients seem to leave after only one visit, EJ Zimmerman, offers a brilliantly conceived comic portrayal that gets huge belly laughs every time she appears on stage. Her over-the-top, high-pitched caricature of Asian women is so dynamic and pleasurable, you'd swear "Avenue Q" playwright Jeff Tilly wrote the part specifically with her in mind. Just amazing.

James Fairchild is ideally cast as Brian, the would-be stand up comic who turns his big solo "I'm Not Wearing Underwear Today" into a genuine showstopper. The versatile Colleen Welsh who plays the dual roles of Mrs. T. and Bad Idea Bear, exhibits fine showmanship as both performer, singer and puppet manipulator. She also completely masters the part of observer or silent partner in scenes when she is simply asked to react while her co-partner assumes the voice or musical moment of a specific puppet. Absolutely brilliant. 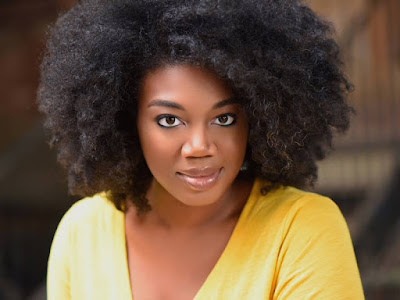 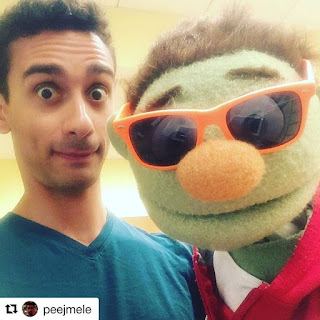 In the role of Gary Coleman (yes, Gary Coleman), the former child star who can't seem to get an acting gig, Abena Mensah-Bonsu is completely in sync with the look, the persona, the voice and the expressions that are all things Gary. You can't help but love everything she says and does.

And Peej Mele, cast in the roles of the often misunderstood Nicky, Trekkie Monster and Bad Idea Bear, offers a unique take on all three of his completely different characters. He's funny. He's amazing. He's sad. He's crazy. He's sentimental. And his enthusiasm for "Avenue Q" is absolutely contagious.

"Avenue Q" is one of those relevant musicals that has plenty to say....and says it so well. It also delights and cajoles much to the delight of everyone on stage and in the audience. Do not miss it! 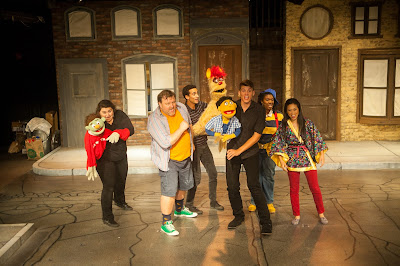