From the Desk of Jim R, Take 2, Column 126, A Review: "Wait Until Dark" (Connecticut Cabaret Theatre) 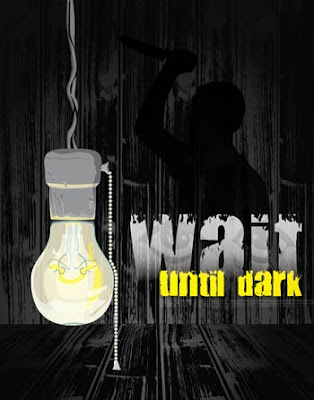 By James V. Ruocco
It has jumps.
It has scares.
It has tension.
It has thrills.
It has edge.
It has surprises.
It has danger.
It has character.
It has vulnerability.
And finally, it has a very talented director in tow and a brilliant ensemble team of six actors in its midst.
That, in a nutshell, is what gives heart, soul and pulse to Connecticut Cabaret Theatre's smart, resourceful staging of Frederick Knott's popular psychological thriller "Wait Until Dark," which incidentally kicks off this acclaimed theater troupe's 22nd season. 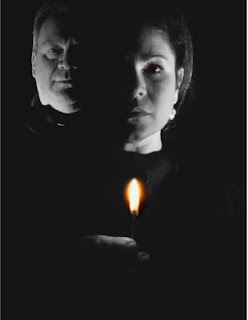 First performed on Broadway in February, 1966 with film star Lee Remick in the pivotal role of blind woman Suzy Hendrix (Audrey Hepburn played the part in the 1967 film adaptation), "Wait Until Dark" found Remick's character quickly targeted by three con-men searching for heroin inside a doll which her husband Sam accidentally transported from Canada as a favor to a woman, who, for plot purposes, has been murdered.

Where's the body?
Who's the killer?
Where's the doll?
Who's going to end up dead?
Is time running out?

The fact that Suzy can only hear and not see the three decidedly creepy but clever con men who continually show up at her apartment wearing a number of different disguises thrusts "Wait Until Dark" forward with endless dramatic questions, pauses, twists, turns and complications. The lights, on occasion, often go out. The blinds in her Greenwich Village residence are used for codes and signals. The phone rings loudly on cue. There's tapping on the pipes. And yes, not everyone survives. 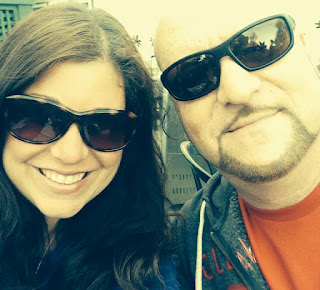 To pull this feat off and do it well, especially well, you have to have the right director with the right mindset. The enlistment of Kris McMurray as director of "Wait Until Dark" is an accomplishment in itself. Who better that McMurray to bring Frederick Knott's off-revived drama to life. He's an actor himself. He loves actors. He loves directing. He loves the entire theatrical process from the first rehearsal to opening night. He understands the mechanics of the actual play script. He takes chances and runs with them. He also knows how to cast a play and cast it right without the bullshit, the favoritism and egotism that has left other community theaters on the outside looking in.

Here, we get a moving, fast-paced, finely calibrated production that keeps everyone in the audience on edge playing detective anxiously awaiting the final denouement where all is revealed, resolved and tidied up right before the final curtain bows. As the story moves from scene to scene and act to act, McMurray puts his own personal stamp on every conversation, every character evolution, every passage of time, every outburst and confrontation, every trick, tick and disguise and every twisty occurrence.

Yes, these are actors performing in a swiftly rehearsed and blocked staged play with dialogue and characters envisioned by Knott and deft, steadied direction by McMurray. But here, as in other productions shaped and readied by McMurray, nothing seems rehearsed or calculated to fit a specific running time. Instead, we get six very likeable, but very different actors who invite us into their lives for hour upon hour. We sit there and watch, of course, but never once are we reminded that they are actors performing in a play. This incarnation of "Wait Until Dark" is real, raw, honest and emotional. 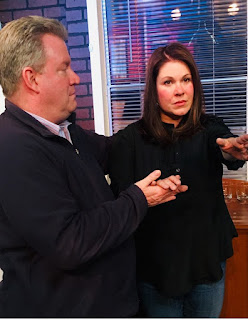 The right pacing is also essential.
Staging "Wait Until Dark," McMurray brings proper energy, spark, intuitiveness and inventiveness to the project.  He locates, dissects and develops the play's psychological center like a master chef in a world-renowned restaurant. He knows when to take a breath, a pause a stop, a go or a jump forward or backward without every once missing a beat. He treats the entire project with the respect it deserves and demands. He also knows what buttons to push when it comes time to amp up the suspense or slap you in the face with a clue or two. And finally, how to make your skin crawl or work you up into a frenzied sweat that requires a cold towel or a hefty glass of gin, vodka or scotch on ice.

Under McMurray's tutelage, the performances are crisp and cutting best.
Years and years of community theater experience and performance make Julie Tremaglio Lemos the ideal candidate for the plum role of blind woman Suzy Hendrix. Whether performing in a comedy, a drama or a musical, the actress always gives 110 perfect. Here, she is no different. She's honest. She's real. She's focused. She's natural. She's passionate. She loves being on the stage. She loves performing. It's in her eyes. It's in her mannerisms. It's in her movements. It's in her characterization. It's in her line delivery.  This is her finest hour yet and it shows. 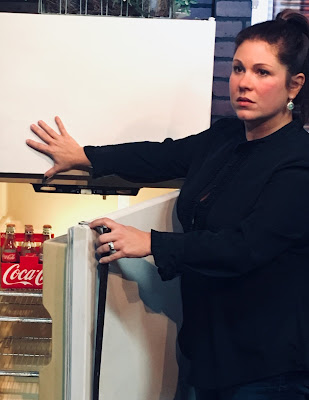 Her portrayal of Suzy Hendrix cleverly projects the character's confusion and frustration with being visually impaired (an accident has left her blind). At the same time, Lemos infuses the part with the apt integrity and imagination of someone trying to make the best of a very difficult situation. She is also totally in sync with the play's actual real-life horrors, the monsters who want to harm her and the final realization that she if she doesn't act quick, she could easily end up dead on the living room floor in a pool of blood. Anxiety and terror reign along with a hefty dose of  courage. All three are superbly executed by Lemos with appropriate color, nuance and steadfastness. 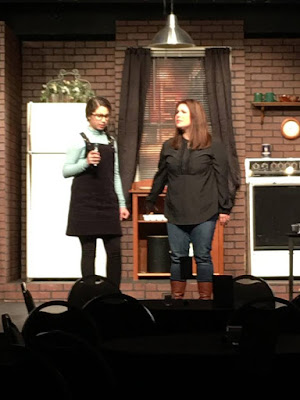 In the role of Gloria, the young girl who lives upstairs from Suzy and Sam (she has been paid by Sam to become Suzy's little helper), Allie Lesser gives one of those knockout performance that cry standing ovation at every turn. She's bratty. She's bitchy. She's obnoxious. She's very full of herself. She also needs a kick in the ass. But that's Gloria , front and center, and Lesser never once drops her guard down for a moment. It's a part she was destined to play and play it she does night and night much to the delight of everyone on stage and in the audience. I, for, one, can't wait to see what she does next.

Playing the roles of Henry Roat, Mike Talman, Sargent Carlino and Sam Hendrix, Josh Luszczak, Dave Wall, Russell Fish and Michael Gilbride, each bring proper dimension, scope and drive to their respective roles. All four are well cast by McMurray. And like Lemos and Lesser, they each deliver  outstanding performances and interact splendidly with their fellow performers..

"Wait Until Dark" is an exciting, satisfying drama, tautly directed by Kris McMurray. It is thrilling, intimate and suspenseful. It is acted with piercing truthfulness and astonishing clarity. It toys with your senses. It pushes you over the edge. It leaves you shaken. And when it's over, its formidable strength and intense humanity is not easily dismissed or forgotten. 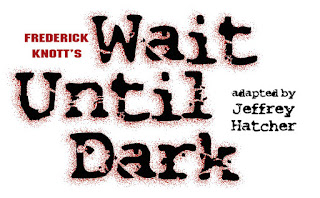