From the Desk of Jim R, Take 2, Column 127, A Review: "The Mountaintop" (Majestic Theater) 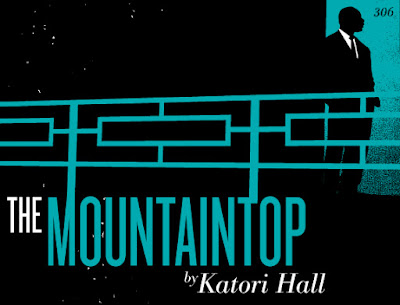 "We've got some difficult days ahead. But it really doesn't matter with me now, because I've been to the mountaintop. And I don't mind. Like anybody, I would like to live a long life. Longevity has its place. But I'm not that concerned about that now. I just want to do God's will. And He's allowed me to go up to the mountain. And I've looked over. And I've seen the Promised Land. I may not get there with you. But I want you to know tonight, that we, as a people, will get to the promised land! "
(Dr. Martin Luther King, Jr. )

In Katori Hall's stirring, heartfelt two-character play "The Mountaintop," it is April 3, 1968 and Dr. Martin Luther King, Jr., in the small confines of Room 306 at the Lorraine Motel in Memphis, Tennessee, is working on yet another visionary civil rights movement speech he plans to deliver to the American people.

On April 4, 1968, King was shot by James Earl Ray at precisely 6:01 p.m. on the balcony of the Lorraine Motel. He was rushed to St. Joseph's Hospital, but never regained consciousness and was pronounced dead at 7:05 p.m.

While these events of King's story are well chronicled and widely known, the depth, drive and punch of Hall's work comes from the playwright's imagined thoughts, moments and interactions the night before his death once this American icon meets and befriends Camae, a Lorraine Motel maid who delivers a pot of coffee and ends up staying to fight, spar, joke, philosophize and finally, foretell  King his pending fate. 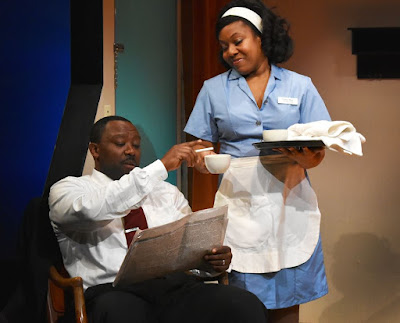 This well-made, two-act play unfolds with just the right mix of fact, fantasy and revelation.
It is lively. It is poignant. It is grounded. It is dramatic. It stirs the senses. It gets you thinking. It delivers an emotional wallop. It celebrates the legacy of the man himself. And just when you think you've got everything figured out, Hall lets it be known that the very outspoken, very opinionated Camae brings more than just coffee to room 306. In truth, she's actually an angel (that's right, an angel from above) who not only gives King the opportunity to talk to God (in this go-round, God is black and female), but tells him of the future that awaits and the one that will unfold 50 years after his assassination.

It's all very well conceived and positioned by Hall who offers her audience a very unique take on King and one that is very different from the oft-performed musical drama "I Have a Dream." Here, King is still front and center, but we get a more radical, ordinary and driven man whose fight for freedom made the world, in part, what it is today. The fantasy-like element of "The Mountaintop" also allows the playwright to offer her own view on African-American history after King's passing and address the political and racial climate of modern America.


"The hope of a secure and livable world lies with nonconformists who are dedicated to justice, peace and brotherhood."
(Dr. Martin Luther King, Jr)

As directed by Gilbert McCauley, "The Mountaintop" is an invigorating theatrical piece. It is intimately staged in the Majestic Theater's cozy, personalized environs (Josiah Durham's colorful set design of the Lorraine Motel is absolutely perfect) and chock full of pathos, quirky, snappy humor and jarring twists of fate, attitude and melodrama. On the flip side, McCauley, working from Hall's multi-layered play text, crafts a very personal portrait of King that reveals his surprising vulnerability, his inner strength, his self-doubt and his ongoing struggle to maintain his stature and grasp of dignity away from the limelight, the press, the television cameras and the famous marches. 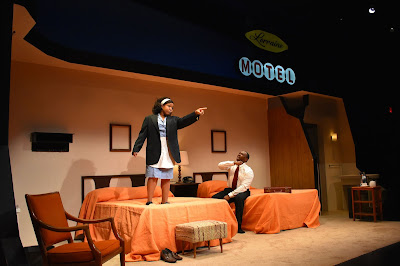 This being a two character play dependent on the full exploration of opportunity and character, pacing, the right kind of pacing, is mandatory in order for "The Mountaintop" to breathe, move and take shape. McCauley's staging proves productive at every turn without any lulls in the action or moments that seem forced and calculated. Elsewhere, the director encourages his actors to spread their wings, so to speak, as he brings them together as one for a night of theater that is both coherent and compellingly collective.

Jamil A.C. Mangan offers theatergoers a rich, deeply textured portrait of Dr. Martin Luther King, Jr., that captures his extraordinary drive, spirit and mindset. This is King, the man, the icon, the preacher, the civil rights leader who loved life, loved people, loved mankind, loved his family, etc. Nothing was too complicated. Nothing was impossible. Nothing was too difficult to overcome. Here, King's fight and struggle for justice and equality is brilliantly rendered in Mangan's raw, real, magnetic performance.


"Faith is taking the first step even when you can't see the whole staircase."
(Dr. Martin Luther King, Jr.) 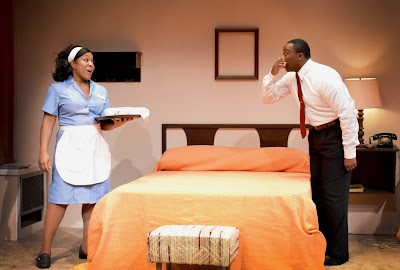 The actor is also faithful to King's spoken orations, which he delivers so magnificently, the words are as powerful today as they were back then. We see that King was a man who wanted peace. And behind the motel room door, as envisioned by Hall and Mangan, he was humorous, lively and utterly charming.

"The Mountaintop" is a major achievement in American theatre. It offers tremendous insight into the life and legacy of Dr. Martin Luther King, Jr., the major events of the Civil Rights movement, his incredible achievements, his love for his family and friends and the many sacrifices he made in his fight for freedom, justice, mankind and racial equality. 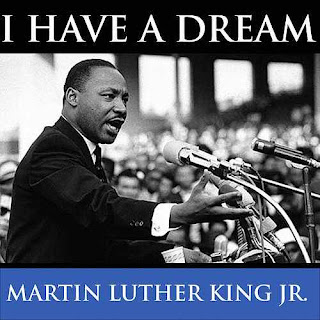 "The Mountaintop" is being staged at the Majestic Theatre (131 Elm St., West Springfield, MA ), now through February 10.
For tickets or more information, call (413) 747-7797.
website: majestictheater.com