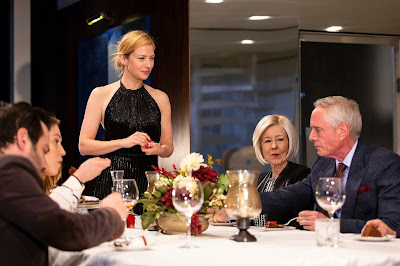 
Josh and Katherine are celebrating their engagement.
One of one, the guests arrive.
Conrad.
Gail.
Haley.
Kai.
Alan.
Johnny.

The party, set in early January 2007, at the couple's posh Park Avenue apartment on Manhattan's upper East Side, however, comes with a price once a glass of wine is spilt and a $300,000 engagement ring goes missing at the dinner table.

That, of course, sets the stage for "The Engagement Party," a thrilling, inventive whodunit of sorts where everyone is suspect and subject to gloom, doom and condemnation as the story unfolds with the sort of crazy twistedness indicative of a BBC Agatha Christie-like thriller. 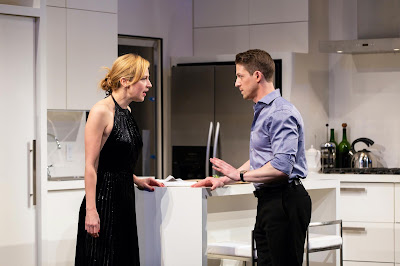 "The Engagement Party" is smartly original as this swank celebration goes from cheery to dark and things eventually come crashing down on everyone with a dynamic roar that is not only satisfying, but one that will have you talking for weeks.

Written to Samuel Baum, "The Engagement Party" is ultimately a play about trust, understanding and destruction brought on because of lies, deceit, jealousy and deception. It's a complicated puzzle,  offset by mystery, moral choices, shocking pronouncements, truths, homosexuality, monetary obsession and exposed nerves. Baum's dialogue, subplots and characters are meticulously drawn and centered and perfectly in sync with the play's many jumps, kicks, jolts and rhythms. At the same time, the playwright points out that no important relationship (familial, sexual, romantic or friend) could survive if trust is totally broken. And secondly, there is no going back whatsoever, if the betrayal is  especially hurtful and damaging. Ouch! 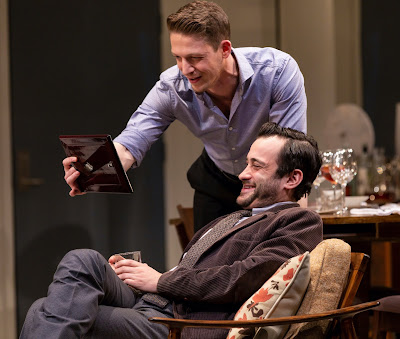 "The Engagement Party" is being directed by the award-winning Darko Tresnjak whose Hartford Stage credits include "A Midsummer Night's Dream," "Rear Window," "Anastasia," "A Lesson from Aloes," "Heartbreak House" and "The Comedy of Errors," among others. Here, he is in his element as he takes hold of Baum's script, turns it all around and upside down and fashions one of the most savvy, astute and spellbinding nights of theater on record in the state. His knowledge, aptitude and love of theater gives "The Engagement Party" its pulse, its dimension, its energy and its raw emotion.

Tresnjak, of course, knows the ending, but he never once lets things slip or does he throw you a bone and say jump. He's far too sophisticated for that. Instead, he asks you to put on your thinking caps, follow the characters from room to room and decide who's lying, who's telling the truth and who is fucked up enough to actually steal the ring when nobody was looking. At the same time, what if it's all a ruse? Was the ring actually stolen? Or did someone deliberately hide it to mess with everyone's heads and get them talking about what they hate and loathe most about one another.

As "The Engagement Party" unfolds, Tresnjak creates the necessary tension, bitterness and mayhem to keep the action moving forward without a halt or a hiccup. Everyone, of course, is guilty. some more than others. Then again, maybe, yes. Maybe, no. Nothing happens without reason or consequence. It's all carefully worked out to push you over the edge or cause you to break out in a sweat before the actual culprit is or isn't revealed. 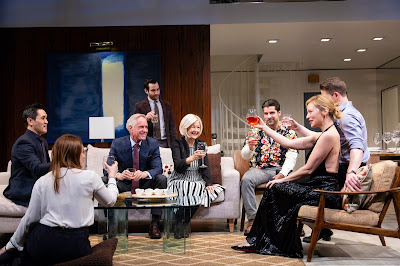 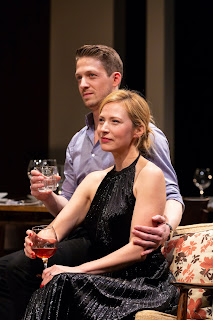 "The Engagement Party" stars Zack Appelman as Josh, Beth Riesgraf as Katherine, Brian Lee Huynh as Kai, Mia Dillon as Gail, Teddy Bergman as Alan, Richard Bekins as Conrad, Anne Troup as Haley and Brian Patrick Murphy as Johnny. Here, as in other plays he has directed at Hartford Stage, Tresnjak has cast yet another group of personable, tremendously talented performers who completely understand the mechanics of the staging, the script, the characters, the evolution of the story and their role in its progression. Everyone is in sync with the actual proceedings and brings insight, perspective, drive, personality and dimension to their characters. All eight actors interact splendidly with their fellow performers no matter how tangled, twisted, crazy and convoluted things get. They toy with our senses. They push us over the edge. They surprise us. They shock us. They keep us guessing. And when the ball drops, they make us see that no one saw it coming.

In conclusion, "The Engagement Party" is a taut, fascinating and captivating theatrical piece that strikes a chord in all of us about family, marriage, friendship and relationships. It is brilliantly directed by Darko Tresnjak. The cast he has chosen shines bright in their individual roles. Sam Baum's play text is fluid and expressive and brings a fresh, intrinsic sound to the wonderful utilized space that is Hartford Stage. And finally, there's an ovation-worthy set, slickly designed by Alexander Dodge whose Hartford Stage credits include "Rear Window" and "Anastasia."

Whodunnit?
In the play's final minutes, all is revealed.
Let's just say that no one saw it coming.
And therein, lies the play's enjoyment.
Bravo! 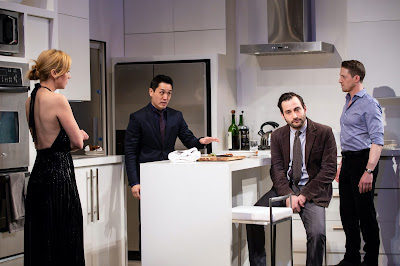 "The Engagement Party" is being presented at Hartford Stage (50 Church St., Hartford, CT), now through February 3.
For tickets or more information, call (860) 527-5151.
website: hartfordstage.org
Posted by JimRuocco at 1:21 PM