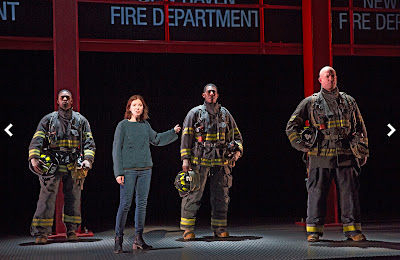 " 'Good Faith' is inspired by the landmark labor case Ricci v. De Stefano, which wound its way through the federal court system all the way to the U.S. Supreme Court, where the majority ruled in 2009 that the City of New Haven has violated the civil rights of a group of firefighters whose promotion test results the City had discarded as having disparate impact on candidates of color. The Court's decision impacted labor laws across the nation, and still echoes in our own community today."
(James Bundy, Artistic Director, Yale Repertory Theatre)

And so, the test on race, discrimination and other matters ensues in Karen Hartman's talky, two-act drama "Good Faith," a complicated, absorbing work that attempts to understand the Ricci v. De Stefano U.S. Supreme Court case, its key players, the actual promotion testing strategies of the New Haven firefighters, its ramifications, the worthiness of the job applicant's status and the various conversations, testimonies and meetings that resulted from the unrest and racial disparity of all parties involved.

Penning "Good Faith" as an actual theatrical piece, Hartman (using the character of the Writer as the play's mouthpiece) questions the abstractions raised by the case, its social injustice, its impact, its inequality and its effect in present day society.  Moreover, what is fair and what is just. Her goal, of course, is to get people thinking about the the city of New Haven, its history, its square miles, it population, its venues, its eateries, its schools, its culture, etc. She also wants people to understand the role of the New Haven firefighter, his day-today interactions, his risk taking, his goals and his leadership. 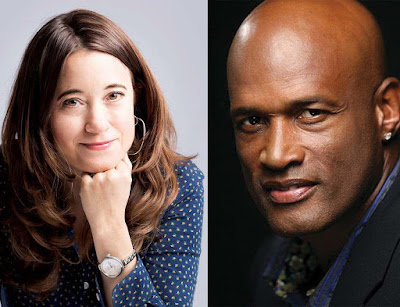 Her play is also peppered with inside jokes about New Haven, Yale Rep, the Greek Olive and Yale University, the renowned institution where she still owes money. Elsewhere, she delves wholeheartedly into  the creative process of writing a play that audiences may or may not get and how it was important, whenever possible to stick to the facts of Ricci v. DeStefano, using real-life documentation and dialogue, the latter compiled from one-on-one interviews with some of the key figures involved.

As "Good Faith"  evolves, it's obvious that Hartman has a clear sense of the entire picture and framework, its cracks, its fissures, its rambling undercurrents and its unifying message. Some may argue this point. Some may scoff and shake their head in disbelief. But this is a play - not a history class. 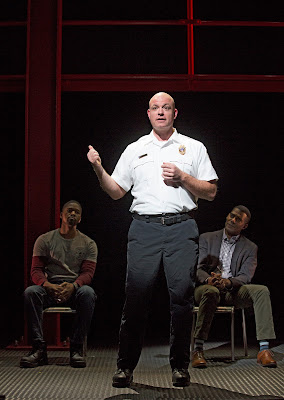 "Good Faith" is being staged by Tony Award-winning director Kenny Leon whose credits include "A Raisin in the Sun," "Fences," Children of a Lesser God," "American Son," "Hairspray Live!" "Gem of the Ocean" and "Smart People." As director, Leon is closely attuned to the play's docudrama theories, conversations, events, interviews, meetings, prejudices, judgments, debates, litigations and policies. He is also aware that the piece, as dictated by the playwright from real conversations, doesn't have all the answers, doesn't get all of the facts straight or right and often takes liberties with the material in its finished, reconfigured theatrical form.

Regardless, Leon crafts a personal, in-your-face drama that gets under your skin, makes you think, toys with your senses and asks you to examine and re-examine your own personal beliefs. Like Hartman, he doesn't purport to have all the answers. Instead, he simply asks you to pay attention, listen closely to the playwright's very talky exposition and in the end, agree or disagree as you draw and evaluate your own conclusions. 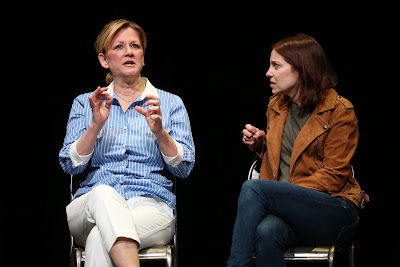 What matters here, of course, is the drama unleashed by Hartman.On that level, Leon succeeds swimmingly. As the story takes shape, the fluency of his expressiveness pushes the action forward without hesitation or calculation. Molding the piece, he always knows what buttons to push, what to emphasize, what to highlight in yellow magic marker, when to hold back, when to entice and excite and more importantly, how to keep the play's combatant undercurrents cracking.

The two-act drama stars Laura Heisler as the Writer, Billy Eugene Jones as Mike Briscoe, Ian Bedford as Frank Ricci and others, Rene Augesen as Karen Lee Torre and others and Rob Demery as Tyrone Ewing and others. Under the direct, conscious tutelage of Leon, the performances of all five actors, some of whom play multiple roles, are crisp, fluent and persuasive. It's a treat to watch them inhabit every one of their roles with amazing vigor and pertinent staying power. Clearly, they relish every moment they are on stage tackling Hartman's dialogue with real, raw, nuanced perfection. 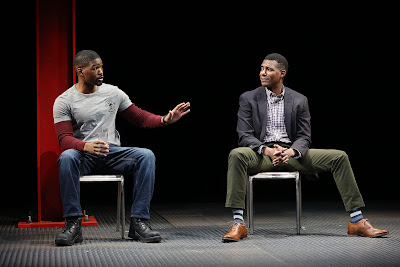 Given the logistics of the piece, Leon creates an atmosphere that is strong and absorbing and at times, not without humor. In turn, the actors are asked to shift gears like graduate students in a Yale School of Drama class, which they do most agreeably. The trick, of course, is to keep everyone focused and not  allow the audience to see the wheels turning as they go through the entire process of reenacting "Good Faith" under Leon's watchful eye. It's a feast of sorts and one that registers their eclectic acting range with astonishing clarity.

"Good Faith: Four Chats About Race and the New Haven Fire Department " is a brave, inspired new work that speaks to all of us. It is involved and passionate. Its conversations are well-rehearsed. The issues it resonates stimulates in true theatrical fashion. The performances realistically mirror the real life people, which they are based upon. And when it's over, the subject matter lingers - and well it should. 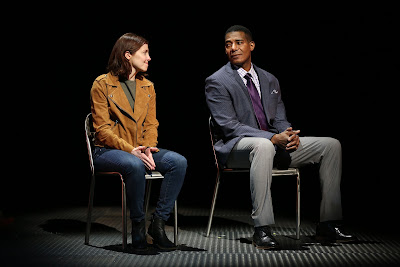