From the Desk of Jim R, Take 2, Column 135, A Review: "Always...Patsy Cline" (Music Theatre of Connecticut) 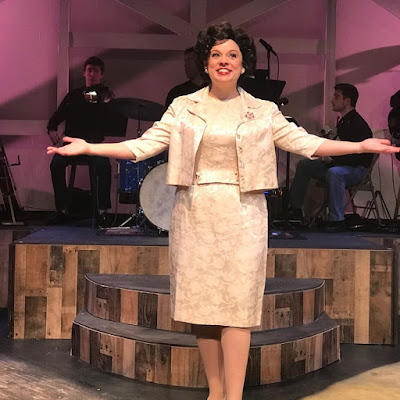 It's more than just a tribute to a country legend.
It's a slice of country music Americana with a down home twist.

"Always...Patsy Cline," an intimate, crowd-pleasing, big-hearted musical, which has the Music Theatre of Connecticut audience clappin' hard and jumpin' up on their feet for nightly standing ovations, is based, in part, on the real-life friendship between the Nashville country star and Houston housewife Louise Seger.

From the moment Seger first heard Cline pour her heart out in song on a live 1957 television broadcast of  'The Arthur Godfrey Show," she became the singer's number one fan and continually hounded the local radio station's disc jockey to play Cline's music continually on the radio. He was more than happy to oblige.

It's not hard to see why. 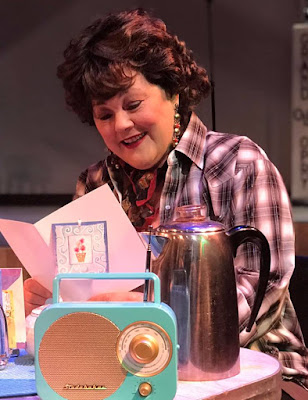 A budding friendship between two women via letters and telephone calls.
The indelible voice of the great Patsy Cline.
The concerts.
The singles.
The cheers.
The country classics.
That's a huge plus...and then some.

"We can't all be hairdressers," cries Louise.

"Always...Patsy Cline" is so beautiful, it's bound to give you chills.

In the directorial chair, Music Theatre of Connecticut has enlisted the talents of Pamela Hill, a very savvy, quick-smart artisan whose credits include "The Music Man," "Crazy For You," "Side by Side by Sondheim," "Urinetown," "Vanya and Sonia and Masha and Spike" and "The 39 Steps."  Here, she brings great knowledge, sentiment, wit and understanding to the country-western backdrop of "Always...Patsy Cline."  Things are powerful. Things are pertinent. Things are played out to delicate, nuanced perfection. 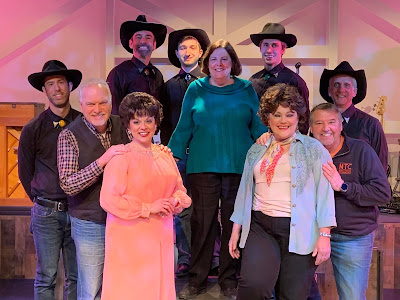 There's also an admirable clarity, charisma, showmanship and sparkle to her staging. Not to mention a heartfelt, one-on-one closeness, kinship and tenderness to the proceedings that gives the two-act musical, added strength, warmth and passion. The closeness of actor to audience is also a plus for it allows Hill to create a country concert intimacy that heightens the show's appeal and also allows, when necessary, both performers to engage and flirt with the audience in three-dimensional fashion.

Working from Ted Swindley's charming, playful, already-proven script, she delves head first into the musical's emotional center and looks for new ways to make a difference, celebrate the voice and sound of Patsy Cline and show her audience what the singer and Seger really had in common. This creative process, a clever and honest mix of color, dash and sweetness, fuels and drives "Always...Patsy Cline" past the running gate. The characters, for example, are more realistic and full-bodied. The jokes, the comedy, the stage business, the stage blocking and the stage movement, have more spark, punch and animation than other productions of the same show.
There's also much more pizzazz to the story, which, in the hands of someone less experienced, would have ended up as just another musical, followed by one song after another. The interaction and  breezy rapport with the audience is swift and spontaneous. The show's celebration of Patsy Cline's legacy is timeless, uninhibited and universal. And finally, her decision to use and include the on-stage band to reflect, comment, sing a few harmonies and participate in the telling of the story is an added bonus that heightens the musical's verve and vitality. 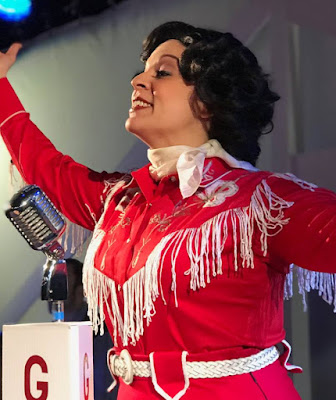 The music songbook for "Always...Patsy Cline," as conceived and created by Swindley, contains the following songs: "Honky Tonk Merry Go Round," "Back In Baby's Arms," "Anytime," "Walkin' After Midnight," "I Fall to Pieces," "It Wasn't God Who Made Honky Tonk Angels," "Come On In (And Sit Right Down)," "Your Cheatin' Heart," "Stupid Cupid," "You Belong to Me," "San Antonio Rose," "Lovesick Blues," "Sweet Dreams," "She's Got You," "Three Cigarettes in the Ashtray," "Crazy," "Seven Lonely Days," "If I Could See the World (Through the Eyes of a Child)," "Just a Closer Walk With Thee," "Blue Moon of Kentucky," "Gotta Lotta Rhythm," "Shake Rattle and Roll," Faded Love," "How Great Thou Art," "True Love," "If You've Got Leavin' on Your Mind" and "Bill Bailey."

For this production, musical direction is provided by the tremendously talented Thomas Martin Conroy whose orchestral credits include many musicals at MTC and all across America. A deft, smart and intuitive musician with a real flair for this sort of raw and flavorful entertainment, Conroy crafts a lively, memorable song fest that captures and accentuates the talent, the drive and the down home spunk and charm that was Patsy Cline. Every song fulfills its intended purpose. Every song shimmers, shakes, rattles and rolls. Every song delivers an emotional punch that makes it entirely personal. There's also plenty of heart, resonance and country spirit to the show reflective of all those wonderful acts that have played (or are still playing) Nashville's Grand Ole Opry. 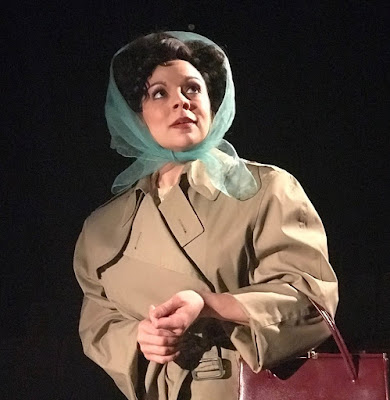 The performances are uplifting, passionate and dazzling.

As Patsy Cline, there's a smooth, smoldering passion and richness to the vocal sound of Mia Scapra, which makes her a natural fit for the part of the late country western music star. Affectionate, sorrowful, charismatic and vibrant, she transports the audience back to a time long gone by with real, genuine affection for Patsy Cline, her music, her song style, her legacy and the star power that capitulated her to stardom in the recording industry. And like the singer herself, she becomes lost in the emotion of the song, the music, the lyrics, the themes and the undercurrents, wistfully, gracefully and naturally.

The voice that is embodied here is Scarpa's, of course, with just the right mix of Cline's indelible sound, phrasing, range, sass, boldness and compassion. It's all very original and wonderfully pitch-perfect as the actress recreates that magic that was "Crazy," "Sweet Dreams," "Walkin' After Midnight," "I Fall to Pieces," "Your Cheatin' Heart," and so many others. Scapra also loves being in front of an audience whether she's singing, drinking beer, chatting, talking or journeying down memory lane pulling one hit song after another from the trunk load of song hits fashioned by the show's creators.
There's such star power here, it's impossible to take your eyes off her for a moment for fear you might miss something important to the story or something special that can and does happen from performance to performance. Her stance, her spontaneity, her musicality, her spirit and her in-the-moment drive is absolutely thrilling. During the second half of the show, there's also a Judy Garland allure and persona that springs into view from time to time, which when you think out it, would make Scarpa the perfect fit for the Judy Garland role in "The Boy from Oz" or "End of the Rainbow," the 2005 musical about the legendary singer herself. 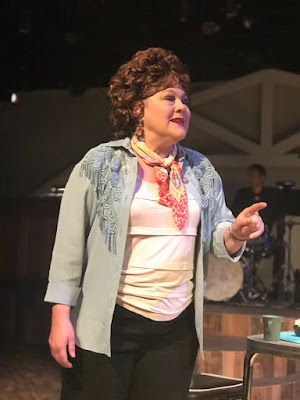 As Cline's excited, devoted and dedicated fan, friend and pen pal Louise Seger, Becky Barta's animated star turn amazes, cajoles and excites much to the delight of everyone around her. It's a role that she was born to play and play it she does like lightning in a bottle about to explode. She is ballsy. She is kooky. She is wicked. Her grasp of the show's comedy shtick, its jokey, well-timed one-liners, its vaudevillian burlesque stage business and several impromptu ad libs with the audience is absolutely sensational and completely in sync with Swindley's playful conceit for the character.
As "Always...Patsy Cline" unfolds, she's on fire from start to finish and there's no stopping her. Or telling what she might do next. Her bump-and grind bits are absolutely hysterical and played out in true burlesque fashion. When she pulls some unsuspecting but lucky gentleman out of the audience to dance with her in impromptu fashion, you willingly go along for the ride and cheer her comic spontaneity.  The actress also shares a refreshing, on stage bond and camaraderie with Scarpa which makes the Cline/Seger friendship of the actual story completely palpable.

"Always...Patsy Cline" is a heartfelt and endearing musical that celebrates the life and legacy of the late, great Patsy Cline, her music, her star power and her friendship and kinship with Louise Seger, the Houston housewife who became her biggest fan. The music itself is right in sync with all things Patsy. The direction is expressive and passionate. And the two lead performances by Scarpa and Barta leave you wanting and begging for more. Then again, that's the point, isn't it? You bet it is.

"Patsy touched the lives of countless people in all walks of life and paved the way for many upcoming female country singers. 'Always Patsy Cline' is both a tribute to her musical talent and a testament to the woman herself."
Pamela Hill, Director, "Always...Patsy Cline, Music Theatre of Connecticut 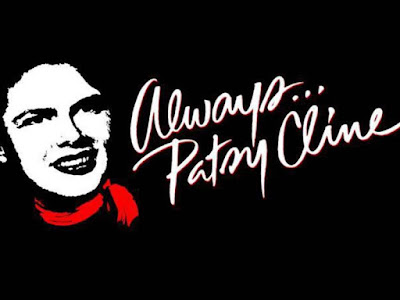 "Always...Patsy Cline" is being staged at Music Theatre of Connecticut (509 Westport Ave, Norwalk, CT), now through February 24.
For tickets or more information, call (203) 454-3883.
website: musictheatreofct.com
Posted by JimRuocco at 11:25 AM