From the Desk of Jim R, Take 2, Column 138, A Review: "The Complete Works of William Shakespeare (Abridged)" (Castle Craig Players) 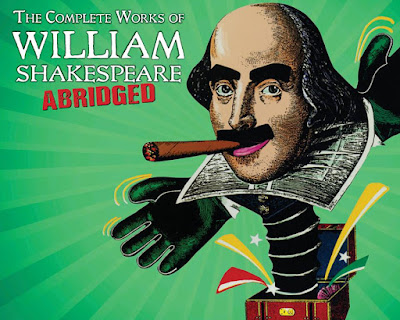 "Romeo and Juliet"
"Hamlet"
"A Midsummer Night's Dream"
"Othello"
"The Comedy of Errors"
"Antony and Cleopatra"
"Titus Andronicus"
"Macbeth."
"Two Noble Kinsmen"
"Twelfth Night"
"As You Like It"

"All the world's a stage" in Castle Craig Players' wonderfully silly "The Complete Works of William Shakespeare (Abridged)," a slaphappy parody of the Bard's 37 plays, involving 3 actors, dozens of costume changes, R-rated props, gender switching, madcap disguises and giddy gravitas, all clocking in at around 97 minutes or longer, depending on the crowd or who's being invited up on stage to engage in some fiendishly clever improvisation a la "Hamlet."

What's not to like?
This edition of the oft-performed "Complete Works" is dappled with cleverly orchestrated patches of slapstick and contrasting humor, reminiscent of "Monty Python" comedies, West End farce and the specialized silliness dished out by Mischief Theatre, the creators of "The Play That Goes Wrong," "The Comedy About a Bank Robbery" and "Lights! Camera! Improvise!" 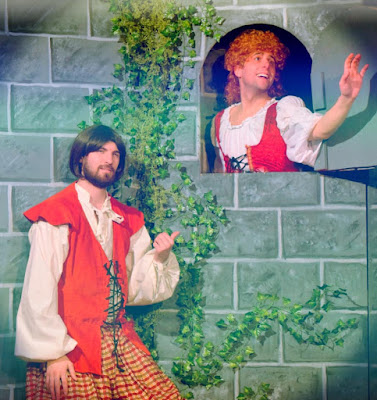 Written by Adam Long, Daniel Singer and Jess Winfield, the two-act play was first performed in 1987. This production takes its cue from the original play text and a newly minted revised script that asks its actors to invite audience participation, break character, speak directly to the audience, deviate from the script when necessary, disregard the fourth wall and make references to today's people, places and headlines.

Here, there's some lively bits about Donald Trump and The Wall,  "General Hospital," "The Bold and the Beautiful," female breasts, male genitalia, tight ends, sword fights, upchucking in handbags and food hampers, hogging the spotlight, actors walking out on show's midway through the performance, show biz rivalries, bending genders, homosexuality, homeboys, spaghetti, Anne Hathaway and oh yes, Patti LuPone, the star of "Evita," whom one audience member claimed he saw on Broadway in "Chicago," not once realizing that the current star of the West End edition of "Company" was never in that Bob Fosse musical. Never!

"Complete Works" is being directed by Melanie Del Sole who co-founded Castle Craig Players with her dad Warren, 26 years ago. The production itself works terrifically, in part, because of Del Sole's deft understanding of farce and its specialized staging techniques, her kinship with her very talented three member cast, her ability to encourage improvisation when the script calls for it and her willingness to uncover the multiple layers of the stories, the characters, the passages and the conceit behind the crazy interpretation. 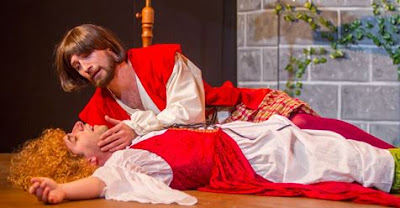 Shaping the production, Del Sole knows what works and what doesn't. She knows how to get and sustain a laugh. She knows when to amp things up, when to take a breath and when to let all hell break loose in the name of William Shakespeare. She trusts and encourages her trio of actors to run wildly with the material without ever looking back. And no matter how crazy or over the top things get, everything is very well put together with plenty of bounce, snap and animation.

Laughs are the key element here and Del Sole's choice of inspired pacing keeps them coming and coming at breakneck speed. It's all farcical silliness from fake breasts deliberately popping out of medieval costuming over and over to "Hamlet" being played backwards in 47 seconds to "Coriolanus" being frowned upon due to the vulgarity of the title and a recitation of Shakespeare's bio accidentally getting intertwined with that of Adolph Hitler. This isn't high art by no means. But with Del Sole at the helm, the laughter elicited by her directorial choices is never ending. What makes it even more fun it that we are all in on the joke. 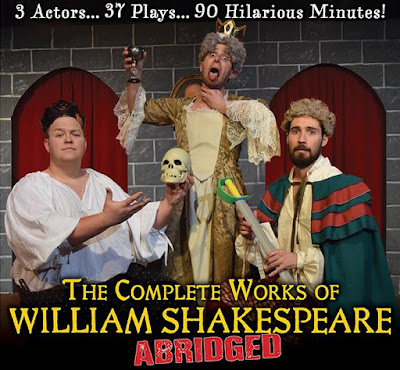 The impeccable timing and technical skills of Ian Galligan, Bobby Schultz and Griffin Kulp are all uniformly excellent. All three throw themselves headfirst into the mounting mayhem of the piece  using the banana peel mindset associated with this form of entertainment. Galligan, a master of comic craziness and laugh riot schadenfreude, effortlessly drifts from one character to the next, echoing the showmanship of silent-film actors, vaudevillians and London comedy troupes all rolled into one. He's funny. He's crazy. He's skillful. He's polished. He loves every minute of what he does from the moment he takes the stage right through to the ovation worthy curtain calls. And it shows.

Griffin Kulp, in turn, handles the play's purposely egregious acting and overplayed mayhem with devilish variety, face-first agility, wildly peppy angst and sidesplitting commitment. He is well versed in playing farce out before a live audience. He possesses the drive and pulse of an actor prone to the laugh-out-loud lunacy, the piece demands. And like Galligan and Schultz, he knows how to make the faux calamities,  mishaps, hiccups, sight gags and slapstick of the entire night workable in true ensemble piece fashion. 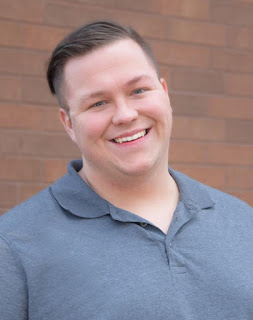 Bobby Schultz has great fun hamming and camping it up, using recognizable comic shtick to heighten his grasp of the tricky material he is asked to perform. He gets it right at every comic turn,  exuding the polish and finesse of someone groomed in British farce who has performed at both the Alhambra and Empire musical halls that once dominated Leicester Square.

"The Complete Works of William Shakespeare (Abridged)" pays due homage to the Bard's uniquely satisfying voice, amped up and distorted for humor's sake  to knock you on your ass, drive you mad, nearly piss your pants or send you out into the winter night mercilessly trying to recite passages from "Hamlet," "Macbeth" and "Romeo and Juliet." It is well staged. The blokish camaraderie between Galligan, Schultz and Kulp is truly magnificent. The actual text is sprinkled with mad lampooning and overflowing improvisation. And finally, it joyfully reinforces that push-and-pull dynamic between actor and audience that is randy, ridiculous and ever so free-spirited. 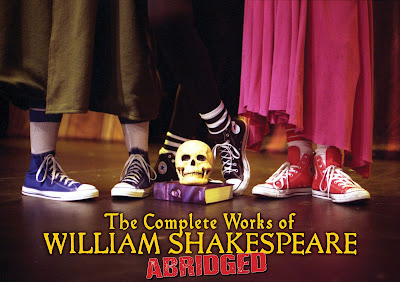 Posted by JimRuocco at 9:12 AM