From the Desk of Jim, R, Take 2, Column 150, A Review: "If We Were Birds" (Connecticut Repertory Theatre) 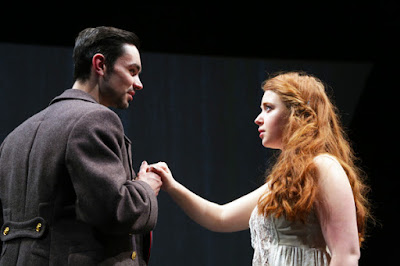 This talented ensemble of ten ...all drama students at U-Conn's School of Dramatic Arts... are the true stars of  "If We Were Birds," Erin Shields' empowering character study of war, revenge, tragedy, heroism, madness, misfortune and rage that uses Ovid's myth "Procne, Philomela and Tereus" (Book VI of "Metamorphoses")  as its emotional centerpiece.

Shields' colorful canvas, an awe-inspiring mix of Greek myth, prophetically drawn voices, reality-twisting experiences and oppressive, crazed agenda, produces a contrapuntal freshness from the outset of this hypnotic production that smartly mixes political subjugation and the brutalities inflicted on women through war using both free-form verse and modern vernacular dialogue. This is theater: real theater. It's the kind of intriguing, avant-garde work that every drama student welcomes, every audience member cheers and every impassioned director wants to envelop. It is also one of those rare, full-bodied dramatic pieces that is both immediate and timely. Not to mention, chilling. 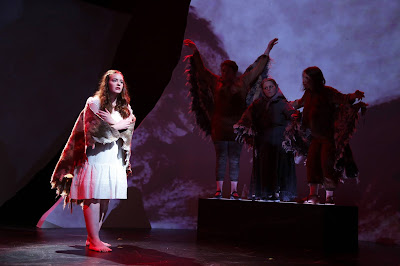 The core story of "If We Were Birds" resonates with profound truths, horrific conflicts, violence, shocking twists and surprises and raw, heavy-handed commentary. Tereus, a dashing, handsome warrior-king, rapes his sister-in-law Philomela, cuts out her tongue and holds her captive so that she will not reveal the horrible facts of their violent, traumatic coupling. As the story unfolds, he remains sexually enticed and enamored by  his beautiful wife Procne, but once she finds out about her husband's nasty transgressions, she seeks revenge, kills their young son Itys and serves the boy to him for dinner in various, specially prepared delicacies.
A chorus of five women, each a victim of rape and male violence (drawn from real-life 20th century atrocities), also populate the piece, sharing their personal thoughts and tragedies as the story unfolds. They also comment on the pending action at hand with authoritative flourish. 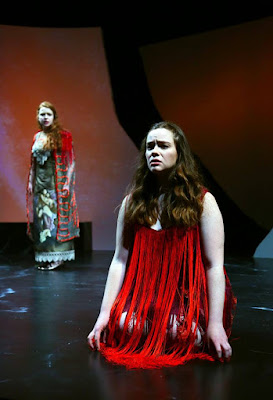 Staging "If We Were Birds," director Helene Kvale ("Eurydice," "The Skin of Our Teeth," "Pride and Prejudice") crafts an outstanding, inventive drama that is puzzling, profound, sexual and wonderfully watchable. So much so that it's impossible to look away for a single second for fear of missing something important and integral to her storytelling and harrowing reenactment of Erin Shields' deeply affecting study.

In every respect, this is an outstanding production. Kvale has that sort of magic touch and furious imagination when it comes to staging this type of colorful presentation. It's a challenge she accepts with immediate relish. She takes hold of it, shapes it, molds it, works it, plays with it and gets it feverishly spruced up to her liking. There are plenty of dramatic bits, yes. But "If We Were Birds" also comes packaged with various, carefully-constructed comic moments and witty anachronisms that Kvale orchestrates with purpose and wicked aplomb. She succeeds swimmingly.

Directorially, "If We Were Birds" is reenacted and paced with a visionary zest and vigor that's pummeled and pushed to the max (simulated sex acts, nipple sucking, and pleasurable masturbation with both hands and stage props, for example), offering plenty of surprise, conflict and tension for both actor and audience. It slaps us in the face. It kicks us in the ass. It works us up into a fevered sweat. It gets the pulses racing. It ignites our emotions. It delights. It leaves us hungry for more. And with Kvale at the helm, we eagerly go along for the ride. 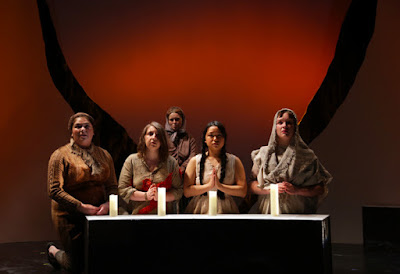 The way this director ignites "If We Were Birds," (one could only imagine what she could do with Lorca's "The House of Bernarda Alba," which would be perfect as her next project at U-Conn), it's impossible not to be swept up in the drama created by the actors themselves. The cast, restless, excited, fascinating and capricious, takes hold of the material, swallows it whole and moves wildly and sensually about the Studio Theatre stage with plenty of unleashed passion as they make perfect sense of the tragedies that unfold. What's wonderful about all ten of them is that no matter what they do, be it large, small, in between or just simply standing in the sidelines reacting and observing, they do it ever so well.
As actors, they are an extraordinary team, completely in sync with the insistent pathos, absurdity and sexuality that Kvale hands them. They understand the material. They get the material. They connect with the material. They love the material. They understand their role in the story and its rapid evolution. They loose themselves in the drama of the piece without ever once breaking character. They take direction well. They take chances. They also love being on stage performing before a live audience. And though "If We Were Birds" is rife with plenty of creative input and direction by Kvale, every actor on stage moves about freely and effortlessly without the slightest hint of calculation or hesitation. And that, in turn, is what makes this production soar.

The creative team for "If We Were Birds" work their necessary magic effectively through bold, colorful and unique choices that are artistic, powerful and dazzlingly effective. They are Casey Lampert (set design), Mack Gauthier (sound design), Allison Zerio (lighting design) and Taowen Pan (costume design).

Brought to life by an exceptionally talented group of University of Connecticut Dramatic Arts students, "If We Were Birds" is an exciting, dynamic, twisty drama that will push you over the edge, grab you by the throat, leave you emotionally drained and finally, undeniably riveted by its frightening, sexually overt dystopia. It is an amazing piece of theater, superbly crafted by Helene Kvale, a director who sets the Studio Theatre ablaze with fiery passion, wit and ambition. And in doing so, thus, creates a  thrillingly alive work, chock full of one amazing moment after another that is entirely gripping for an unbroken 1 hour and 20 minutes. Bravo! Posted by JimRuocco at 2:45 PM