From the Desk of Jim R, Take 2, Column 153, A Review: "Cabaret" (Music Theatre of Connecticut) 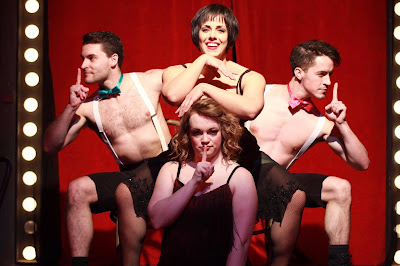 Reprising the grunge, the turbulence, the sex, the angst and the soul of Kander and Ebb's edgy classic American musical "Cabaret," Music Theatre of Connecticut strikes the right chord - on every level- as its dutifully exposes the dangers, the shock and the insidious political climate of pre-war Berlin during the Hitler regime in Germany. The way this production inches forward from act to act and builds toward its fervid, scorching conclusion is so emotionally draining, it's impossible not to be moved, tearful or just plain stunned and silenced by it all.

All nine are equally strong in their own right, serving as the musical's emotional voice in a world where illusion and fantasy are about to be stripped naked and bare. And life, as they know it, is going to completely disappear forever. 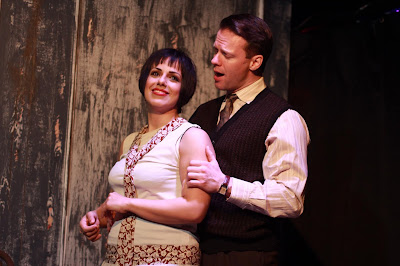 Since its Broadway debut in 1966, the musical score for "Cabaret" by Kander and Ebb has been changed, altered, rewritten and revised to include original songs from the 1972 film adaptation or new ones that were introduced in subsequent incarnations including the 1993 London revival by Sam Mendes and his subsequent 1998 production on Broadway with Natasha Richardson as Sally Bowles. This edition takes its cue from the original Broadway version but deletes "Meeskite" and "The Telephone Song" and adds "Maybe This Time" from the original motion picture and the Mendes revival along with "I Don't Care Much" from the 1987 Broadway production and the 1998 Broadway version, eerily sung by Alan Cumming. "Tomorrow Belongs to Me" is also reworked at MTC to reflect the song's strong Nazi overtones, which in this version, are an indication of the atrocities and horrors awaiting both Jews and homosexuals. The effect is as numbing as it was in the 1972 motion picture, directed by Bob Fosse.

Elsewhere, this "Cabaret" wisely preserves most of the music from the original Broadway production that starred Jill Haworth, Lotte Lenya, Joel Grey, Bert Convy, Edward Winter and Peg Murray. In short: "Willkommen," "So What?" "Don't Tell Mama," "Perfectly Marvelous," "Two Ladies," "It Couldn't Please Me More (A Pineapple)," "Why Should I Wake Up?" "Sitting Pretty," "Money," "Married," "If You Could See Her," "Cabaret" and "Willkommen (Reprise)" 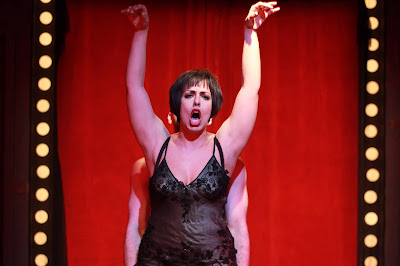 Musical direction for "Cabaret" has fallen into the more than capable hands of Thomas Conroy (on keyboard) with the able assist of Bob Carlson (trombone), Gary Ruggiero (reeds), Joe Sinaguglia (bass) and Chris Johnson (drums). What's remarkable here is Conroy's smart, invigorating take on the Kander and Ebb musical score and its seductive, mindful, throbbing evolution through the "Cabaret" story. Yes, we know the music. Yes, we know the lyrics. Yes, we know who sings what and when? And yes, we know the intended meaning and conceit of the entire score that Kander and Ebb fought so hard to preserve.

Nonetheless, with Conroy, front and center, the "Cabaret" musical score achieves a thrilling, edgy passion and pulse that takes it to an entirely new level of musical theatre. Here, every song achieves the attitude, spirit, angst, humor and frankness of Kander and Ebb's creative mindset. Things unfold with such a  fiery and remarkable freshness, you'd think this was your first time hearing familiar showstoppers like "Cabaret," "Willkommen" and "If You Could See Her." Here, nothing is taken for granted. Nothing is overplayed. Nothing is out of place. It all resounds with the sting, bite and melodrama that "Cabaret" is famous for. 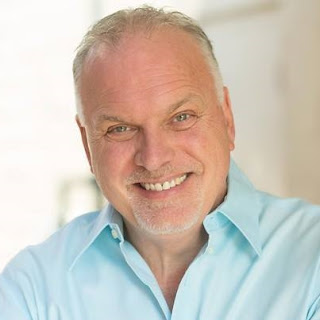 If you're seen the Broadway production, the film adaptation, the Mendes' version or the national tour, this "Cabaret," as envisioned by Kevin Connors, finds new ways to seduce and entice you (there's plenty of skin, a wise and important move on Connors' part), push you over the edge, make you blush and squirm, kick you in the ass, drop your panties or pull you pants down starting with the zipper. That said, it unfolds in a whole new light that peels back the juicy layers of Joe Masteroff's play script and thus, openly exposes the grimy yet inviting allure of pre-war Berlin, its decadent populace and its seedy, after hours clubs where boy meets girl or boy meets boy and anything can (and does) happen once the lights go out.

What's special about this production is that Connors doesn't whitewash or censor anything. He tells it like it is. He adds real dimension and nuance to every one of the principal and supporting characters. He allows each and every one of them to bare their souls openly in a changing world that will eventually rip them apart and toss them in the gutter. He doesn't glamorize or underplay the angst, swagger or brutality of the material. He also relies on John Van Druten's "I Am a Camera" and Christopher Isherword's "Berlin Stories" for additional shading and inspiration.

Here, as in "Jekyll & Hyde" and "Cat on a Hot Tin Roof," Connors takes chances and runs wildly with them. He loves theater. He loves actors. He loves plays. He loves musicals. He loves directing. Yet nothing is by the book or by the numbers and that's exactly what keeps him at the top of his game. This is "Cabaret," not Disney Theme Park. So yes, things are smutty, dirty, queer, sensational and wicked. This is Berlin, circa the 1930's. So what you get are people fighting for their life, fighting for survival and fighting for a living, no matter the cost. It's all very upfront and personal, marked by real compassion via songs, dances, musical, dialogue and lyrics. Things are also candid and light, confrontational and predatory and mysterious and expressionistic, depending on the situation. No matter. Connors knows exactly what he's doing and the end result, as always, is both illuminating and fulfilling. 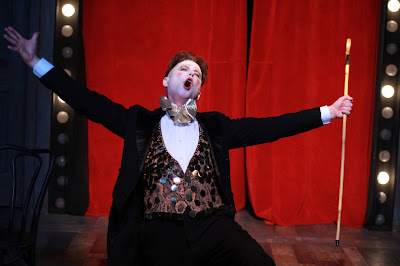 As "Cabaret's" Master of Ceremonies, Eric Scott Kincaid welcomes us into the world of decadent Berlin, mischievously, eerily and seductively. He dazzles. He shines. He manipulates. He fascinates. It's a showstopping performance that mixes eroticism, wit, gayness and condemnation most agreeably. Musically, his "Willkommen" has bite and decadent vitality. "If You Could See Her" is both amusingly and sardonically portrayed, complete with a dancing gorilla in pink costuming. "I Don't Care Much," which he sings like a dying prisoner awaiting execution, is shivering, commanding and definitely worth an encore or two. 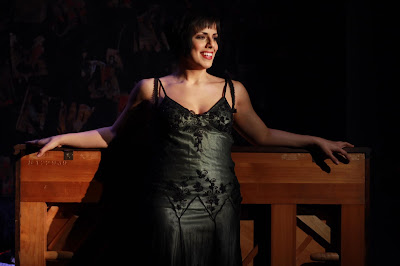 In the plum role of Sally Bowles, Desiree Davar (a Liza Minnelli/ Patti LuPone lookalike) offers a robust, free-spirited, kinky portrayal of the Kit Kat Klub's naughty, promiscious singer and party girl, which she plays and sings ("Don't Tell Mama," "Maybe This Time," "Cabaret," for example) with gleeful, unpredictible, celebrated abandon. But when she drops her guard, most noticeably in Act II, we see a very frightened woman, who, despite illusions of grandeur, is very aware of what is happening around her and how she may (and can) be swallowed up whole. Vocally, she's a powerhouse, offering her own, personal, dynamic take on "Cabaret's" most celebrated songs.

Would-be American writer Cliff Bradshaw, as portrayed by Nicolas Dromard, is dashing, handsome, polished and heartfelt. His pure, vibrant rendition of "Why Should I Wake Up?" which oddly is often  cut from other revivals of "Cabaret," is left intact for this incarnation. It is a genuine showstopper, performed with playful resonance and passion. Andrew Foote, last seen as Henry Jekyll and Edward Hyde in MTC's thrilling production of "Jekyll & Hyde" offers an honest, full-bodied,  portrayal of Ernst Ludwig, a German citizen who offers Cliff work smuggling currency in and out of Paris. He too is in fine voice and completely in control of his character and his every-changing role within the musical. 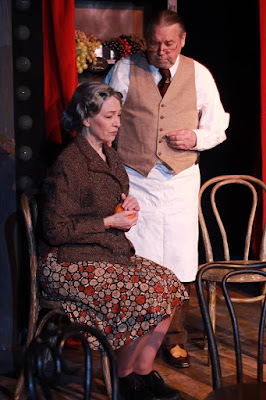 Jim Schilling, in the role of Jewish shopkeeper Herr Schultz, a part made famous by Jack Gilford in the original Broadway production of "Cabaret," offers a warm, sincere and compassionate portrayal of the iconic character that is every bit as good, if not better than Gilford's. He is well matched opposite Anne Kanengeiser who plays his love interest Fraulein Schneider, the German landlady who agrees to become his wife. Their duets "It Couldn't Please Me More (A Pineapple)" and "Married" are pitch-perfect and sung with real, sweet-tinged emotion. Much later, Kanengeiser delivers the potent and stirring "What Would You Do?" a song about choices, desperation, survival and life's deafening blows. It is magnificent. 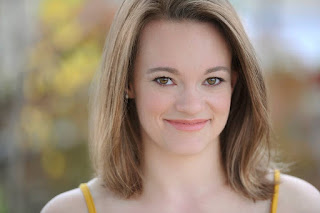 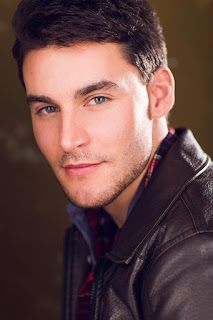 As Fraulein Kost, Hillary Ekwall is saucy, sexy and appealing, which is exactly what the part calls  for. But underneath, the actress deftly exposes the character's desperation, pain and fight for survival in the wake of a troubled tomorrow. Alex Drost and Tony Conaty, as Man 1 and Man 2, assume a variety of different roles from Kit Kat Klub dancers to soldiers and conductors, etc. They are totally in sync with the provocative and bold conceit that is "Cabaret." And when they perform mostly with their shirts off, they serve as eye candy for both the excited women in the audience and the gay men as well. This being "Cabaret," that is meant as the highest compliment.

Edgy, enticing and enthralling, "Cabaret" is a whirlwind of musical theatre that reflects the turbulent climate of the times with bone-chilling effect. As seen through the eyes of director Kevin Connors, it is fresh, brazen and relevant. The Kander and Ebb score is thrilling at every single turn. The cast - every one of them - are outstanding. And the ending will leave you broken, the way its creators and Connors intended. 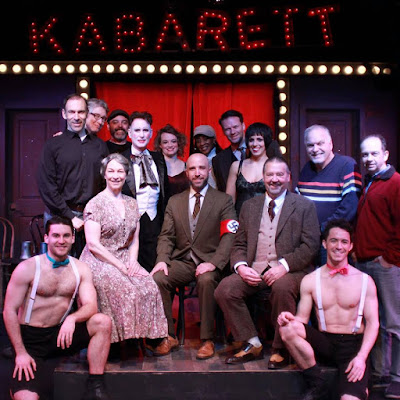 Posted by JimRuocco at 2:53 PM