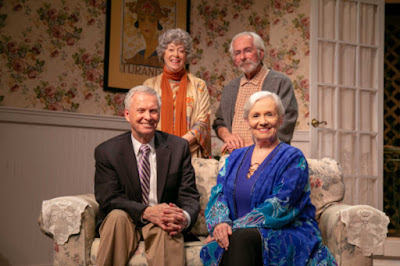 The setting for Ronald Harwood's  engaging two-act comedy "Quartet" is Beecham House, an English retirement home for aging musicians, all of whom are former opera-singers keen on reprising the celebrated third act quartet "Bella figlia dell'amore from "Rigoletto" for an upcoming concert tribute to the opera's composer Giuseppe Verdi.

One big problem: one can't sing anymore and the others aren't exactly opera ready.

With the stage set for laughter, therein, lies the humor for this gleeful and playful oeuvre that works hard to tickle your funny bone, slap you in the face, bite you in the ass and nearly knock you out of your seat from laughing so hard.

"Quartet" revels in its own lightheartedness and eccentricity as it delivers dollops of charm and warmth, mixed with cleverly orchestrated doses of open-hearted honesty, vulnerability and unabashed delight. It's a show that wears its heart on its sleeve, but comes gift wrapped with characters and situations that are rich in incident, detail and audience involvement. All that's missing is a bottle of champagne waiting to be uncorked. Or a cuppa of Typhoo waiting to be brewed. 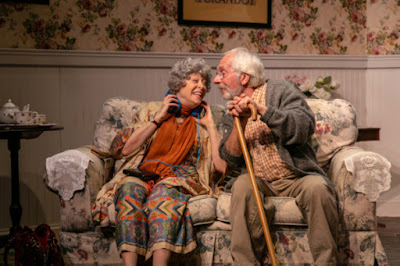 As written by Harwood, "Quartet" exposes the truths of old age, both humorously and affectingly in much the same fashion as "The Best Exotic Marigold Hotel." The premise is interesting. The characters are interesting. The combined potential of both is compelling. As is, the play's simplistic and candid remarks about bad knees, walking sticks, senility, sagging body parts, sexual malfunctions and having to make endless trips back and forth to the bathroom in the middle of the night. It's a fact of life for people past a certain age and one that the play attacks with devious relish.

British-born Jane Farnol who trained at London's prestigious Royal Academy of Dramatic Art is the perfect fit for "Quartet." At TheatreWorks, she has directed several major works including "The Taming of the Shrew," "Shakespeare For My Father," "The Laramie Project," "Gross Decency," "The Elephant Man" and last season's hypnotic character drama "All My Sons."  She gets theater. She loves theater. She understands theater. Directorially, she brings tremendous insight, understanding and depth to every project she undertakes. And when casting a production, she finds the best possible talent out there to bring a real sense of authenticity and performance dynamic to their parts, whether it be drama, comedy, Shakespeare or some celebrated stage classic. 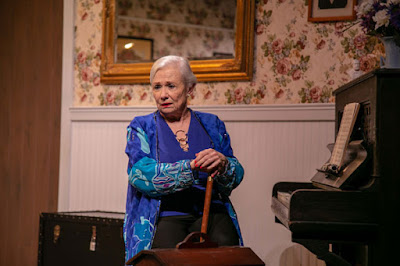 With "Quartet," Farnol creates a breezy entertainment that unfolds with pointed diversity, snap and cheeky amusement. Her direction is spunky and bemusing, solid and crisp, sweet and sentimental, and oh yes, wicked and acerbic. She has great fun with the material, the characters, the dialogue, the  beats, rhythms and pauses, the pronouncements, the observations, the surprises and the eventual outcomes. It's all beautifully shaped and controlled, but without that rehearsed feel of an opening night or performance after performance wariness. Here, things are spontaneous, direct and natural. Farnol wouldn't have it any other way.

This being a British comedy with decidedly British humor, detail, references and geography, Farnol never once goes the Neil Simon route to get laughter from her American audience. She also doesn't dumb things down to justify the play's English, look, feel and verbage.  She respects Harwood's
diverse play script and gives it the proper bounce, lift and zest it demands page after page, scene after scene, act after act. You also don't have to be from England or be well versed in all things English to get "Quartet." If you are, well "bully" for you. If you're not, not to worry. Farnol gets the point across amusingly enough with nary a hiccup, a skip or a bloody crackle.

Given the play's premise, the production is well built to deliver one laugh after another which "Quartet" ratchets steadily and effortlessly. The trick, of course, is not to see the gag or its banana peel effect coming. Therefore, as "Quartet" glides from one comic bit to the next, Farnol orchestrates things beautifully, always allowing the material to breathe and ripen without any form of obvious calculation. No matter what the joke is or its intention, the circumference of each poke or dilemma gets the big laugh, gets the big wink and gets the big nudge with deadpan mischief and merriment. 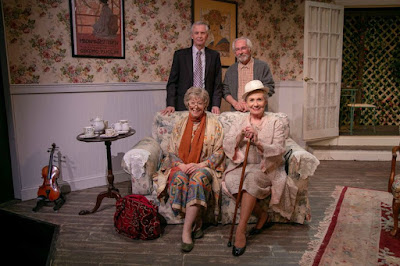 "Quartet" stars Dandy Barrett as Jean Horton, Jody Bayer as Cecily Robson, Timothy Breslin as Reginald Paget and Ron Malyszka as Wilfred Bond. Every one of these actors is well versed in the style, language and mechanics of British comedy which they enact with assurance, efficiency, wit and immediacy, thus giving the production the kick, warmth, spirit and spunk it requires in order to succeed. They have fun. We have fun. They are excited. We are excited. They know to deliver the punchline with added measure. And yes, we lap it up like honey, willingly going along for the ride.

As performers, they also bring a vibrant, eclectic collection of expressions, emotions, personalities and acting styles to their individual roles. They take hold of them, shape them to their liking and make them their own (no two actors are alike), which in a production as intimate and refreshing as this one, makes all the difference in the world. Elsewhere, they nicely succumb to the atmospheric  feel of the production, its conceit, its humor, its British roots, its comedy, its drama, its remembrances and its operatic dalliances.

Breslin is splendid as the harsh, opinionated Reggie who shouts profanities when marmalade is withheld from him at breakfast, treats Jean abhorrently when she first arrives at Beecham House or becomes completely absorbed in his long-winded discussions about art and other topics he fancies.
Malyska gets laughs in all the right places as the lusty, oversexed Wilfred who somehow gets the urge to seduce and fornicate whenever an attractive female is nearby. Bayer, an actress with a keen, natural sense of comic timing, is appropriately silly and batty as the forgetful but charming and loveable Cecily. Barrett, in turn, beautifully conveys the proudness and vulnerability of a self-centered opera diva obsessed with her celebrated past, now forced to accept an uncertain future with no money and a trunk full of faded memories.

Technically, "Quartet" is in top form. The set for Beecham House, designed by Jim Hipp, is spacious, inviting, colorful and atmospherically reflective of its British surroundings in Kent. Lighting by Nick Kaye is smart and savvy and adapts admirably to the TheatreWorks environs and actual playing space . 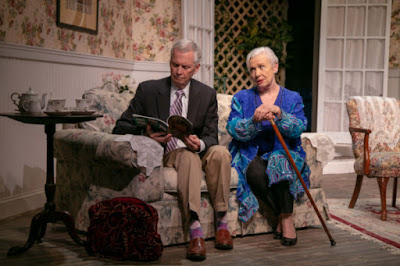 Costuming, which, in this production, plays a central role in the proceedings, especially during the latter part of Act II, has been designed by Mary Kimball, who also created the wardrobe for last year's "All My Sons" at TheatreWorks. For "Quartet," every inch of every look is impeccably done in terms of style, flow, color and fashion statement. The clothes themselves complement each of the characters who wear them, taking into account the ready-to-wear individuality of each garment, its ensemble feel, the skin tones and hair styles of each actor and the playwright's characterization conceit for "Quartet." Kimball's impressive talents are not only exceedingly polished, but also take into account the design palate of the production's creative team. In short, no one get upstaged or fades quietly into the furniture, the wall paper or the scenery. Well, done, Ms. Kimball.

In conclusion, "Quartet" is a sincere, strong, individualistic character piece that rivets attention with amusing, quirky panache and gentle pathos without ever taking serious aim at retirement and its sometimes  discomforting consequences. Working from Ronald Harwood's splendidly crafted script, director Jane Farnol leads her talented cast of four through a  very moving, honest work that humorously celebrates old age with harmonious balance and purpose.Nothing tragic. Nothing antiseptic. Nothing mundane. Just an incredibly honest story about a group of people that connects the dots between life, death and survival with positive thinking and positive communication and nary  a drop of condescension and preachiness. 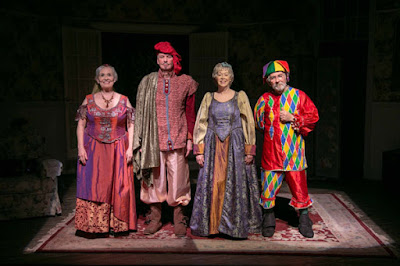 Posted by JimRuocco at 3:23 AM