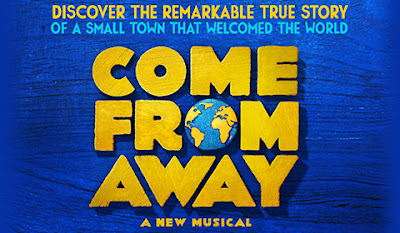 These twelve actors are the heart, soul and pulse of  "Come From Away," an exhilarating, wholesome, award-winning musical about life, love and survival that gets the pulses racing, breaks your heart in two and brings a big smile to your face when all is said and done. 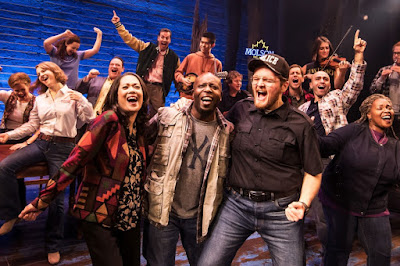 This is a musical that shows how kindness and caring works ever so hard to lift one's spirits at a great time of need. Its principles about warmth, humanity and generosity are addressed freely and openly. Its resolute message about people of every shape, size, color and ethnicity - all united as one - unfolds carefully and diligently. It also gets you thinking long and hard about what you would do in a life-threatening situation such as this one if you were in their place.

And that, in a nutshell, is reason enough to rejoice and embrace this heroic, fell-good portrait of mankind that evolves under very extraordinary circumstances. 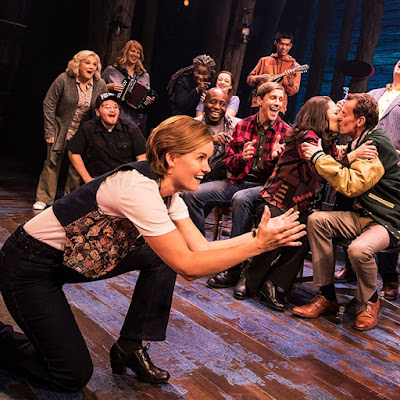 The story of "Come From Away" is set in the week following the September 11th attacks of the World Trade Center in New York. It retells the true story of the events that transpired over a series of days when 38 planes were forced to land in the town of Gander, located in the province of Newfoundland.
It is not, however, a 9/11 tale about the actual tragedy. Instead, the main focus of the musical is what actually happened in Newfoundland and how this small community of Canadians and their newly arrived visitors responded to the tragedy while waiting for the American airspace to be cleared.

Director Christopher Ashley, the creative genius behind the current London and Broadway productions of "Come From Away" comes to the National Touring edition of his award-winning musical with the same mindset, intuition and drive that made those incarnations completely groundbreaking and memorable. Then and now, everything is impeccably timed to the millisecond, a conceit that steers his 12-member ensemble cast through the musical and spoken narrative of the piece with breakneck speed and agility. Under his tutelage, each and every actor also changes costumes, parts and accents with drumbeat resilience, doubling as flight passengers, crew members and lastly, the kind-hearted, welcoming citizens of Gander and its surrounding villages.

As "Come From Away" evolves, Ashley brings a powerful resonance and fierce commitment to the proceedings, layered with affecting, real-life moments that keep things thrilling and genuinely original. This isn't "Oklahoma!" or "The Music Man." This is a modern day musical that gets its pulse from some pretty intricate, hands-on staging maneuvers and blocking techniques that Ashley engineers with crafty and brainy ingenuity. Sets spin. Lights change. Chairs and tables are set and reset. Cast members tilt to the left. Cast members tilt to the right. They stand. They sit. They dance. They move in complete unison or they stand completely still. No matter. This new staging terrain not only heightens the play's dramatic momentum, but gives it a real sense of self, worth and definition. 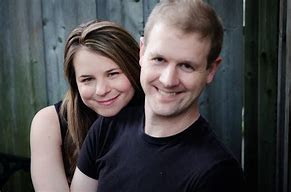 The musical score for "Come From Away" was written by Irene Sankoff and David Hein. Most recently, it received the 2019 Olivier Award for Outstanding Achievement of Music, a prize that is well deserved on every level. It contains 20 songs, all of which are important to the progression of the story and the many different characters who sing them. They are: "Welcome to the Rock," "38 Planes," "Blankets and Bedding," "28 Hours/Wherever We Are," "Darkness and Trees," "Darkness and Trees (Reprise)," "Lead Us Out of the Night," "Phoning Home," "Costume Party," "I Am Here," "Prayer," "On the Edge," "In the Bar/ Heave Away," "Screech In," "Me and the Sky," "Stop the World," "Somewhere in the Middle of Nowhere," "Something's Missing,  "Finale" and "Screech Out."

What's especially gratifying about the music of "Come From Away" is that it never once loses sight of its origins, the 9/11 tragedy, the people of Newfoundland and those airline passengers who simply can't go home because it's simply not safe for them to do so. An infectious mix of many styles - Celtic folk, bluegrass, rock, drinking songs, modern musical ballads, choral anthems - it is slick, melodic, driven, catchy and revelatory. Nothing is out of place. Nothing is odd or uncertain. Nothing is thrown in to give the ensemble an additional song or two. The placement, the varying mood swings, the undercurrents, the high points, the exchanges, the beats, the rhythms, the humorous banter, all fit together seamlessly. 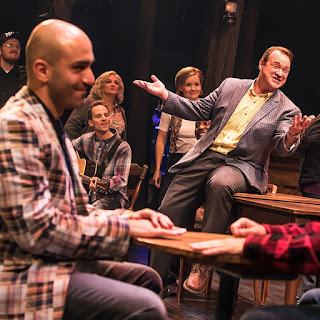 Under the musical supervision of Ian Eisendrath, the stellar "Come From Away" cast fills the stage with confident, full-bodied singing, matched vocally by the right volume, contour, depth and emotional warmth. Backed by a first-class team of musicians, every song that the cast sings, including "Welcome to the Rock," "38 Planes" and "On the Edge," among others, is fresh, exciting and thrillingly melodic. The harmonies are lush and sweet-sounding. The ensemble numbers pull you in with ripe, driven immediacy. And whenever someone takes the spotlight for a solo turn, a duet or an ensemble piece where all twelve cast members are given individual lyrics and passages to sing, the overall spirit and spunk of the piece is both riveting and refreshing.

The "Come From Away" ensemble is both skillful and savvy, delivering important, confident performances so real and so raw, the essential message of the piece resonates believably and emotionally at every turn. It's hardly fair to single anyone out because all twelve work unbelievably hard to sing, dance and swap roles with quicksilver precision. Their teamwork is stellar, as is their ability to keep the story always moving forward with an open-heartedness and warmth that is absolutely contagious.

"Come From Away" is an exuberant, uplifting musical that floors you with emotion, takes your breath away and allows you to shed a tear or two before bringing a big, wide-eyed grin to your face. It simply can't be helped.
The premise - life after 9/11- is one that's impossible to resist. The music is rich and invigorating. The story itself unfolds with a heart as big as Newfoundland. The cast of 12 bring a real sense of purpose to their respective roles. And when the musical fades to black and the cast steps forward in the limelight to take their final bows, the cheers and tears from everyone in the audience is fully justified - and then some. And oh yes, you'll probably want to see this production again. 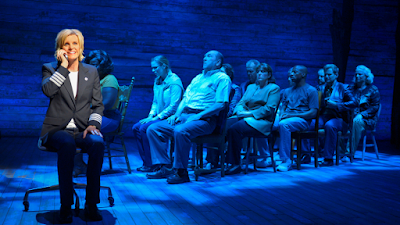