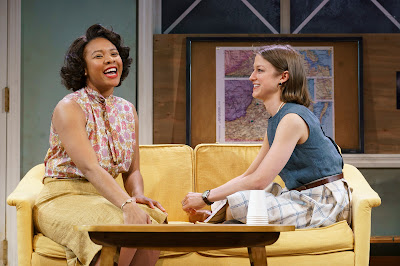 In Yale Rep's "Cadillac Crew," the time is 1964 and Rosa Parks is en-route to Virginia to deliver yet another powerful speech on both women's rights and the civil rights movement. In an office nearby, four women -  three black; one white- eagerly await the arrival of this distinguished speaker, whom they hope, through strong words and dialogue, will validate awareness of their cause entirely through peace and not violence and hatred.

The two-act drama, written by Tori Sampson, gives significant pulse to the civil rights movement of the day, its discussions, its people, its journey (in this case, an important road trip that occurs in Act II), its fight, its freedom, its oppression and finally, its eventual consequences.

"Cadillac Crew" is rich in pride and humanity, pathos and humor, conviction and drama. Its concept, conflict and relationship to the African-American past, is both truthful and universal. Its depiction of the keynote "cadillac crew" road trip - black and white women, united and riding together on a desegregated car journey - is rife with intrigue, fall outs and danger. And it's conclusion, which time travels the entire cast to the present day in different roles , is one of strongness, unification and unashamed intellect. 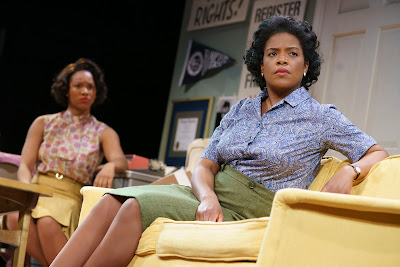 Jesse Rasmussen, a New York City-based director and writer, who, originally hails from Melbourne, Australia, comes to Yale Rep with an impressive line-up of directorial credits including "Macbeth," "The Temptation of St. Anthony," "This Land Was Made,"  " 'Tis Pity She's a Whore" and "Everything That Never Happened." Smart, savvy and intuitive, she takes hold of Samson's play script, studies and reviews its conversational storyboard, its activist strategies, its four female characters and its powerful 1960s' voice and crafts a lively, passionate, moving drama that warrants attention for well over two hours.

As "Cadillac Crew" evolves, Rasmussen deftly exposes the harsh realities of black life during the 1960's, its limitations and barriers, its political unrest, its dreams and hopes, its fight for equality, its practiced, morally wrong segregation policies and its mistreatment of people of color. But directorially, she does it -  and so much more - in ways that are direct, personal and concrete, with nary of hit of preachiness, calculation or melodrama.

Page by page, scene by scene, act by act, she validates the voice, the intellect and the advocacy of the civil rights movement, its creative coalitions, its warranted demands and its attention-grabbing headlines. She weaves these elements into a seamless whole that is proud and revelatory. She avoids any inherent soapiness, unless she is going for a laugh, as "Cadillac Crew' is not without playful flights of humor. She also shapes and molds the drama at hand it ways that are natural, blunt, textured and lived in. And when a character simply stands still and not one line of dialogue is spoken, we always know what she is thinking. 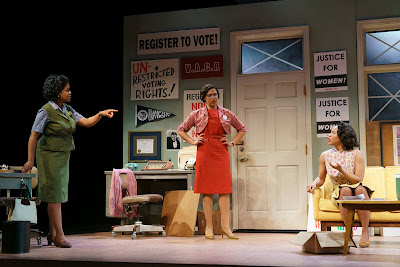 "Cadillac Crew" stars Chalia La Tour as Rachel, Ashley Bryant as Dee, Dria Brown as Abby and Bronte England-Nelson as Sarah. All four actresses, each and every one well cast for the roles they are asked to portray, effectively communicate the playwright's dynamic conversations, themes and undercurrents in such honest and realistic ways, you completely forget they are women performing in a play. They get the story. They get its message. They get and understand their characters. They get what Nelson is saying. They take charge of the material and make it their own. They are also completely in sync with the the playwright's edgy, straightforward conceit and the progression of the actual story.

The characters themselves, all powerful women, in their own right, are individuals with their own voice, their own manner, their own personality and their own stamina, which La Tour, Bryant, Brown and England-Nelson, address, both vividly and excitedly. When they talk, we listen. When they fight, we watch and take sides. When they hurt, we feel their pain. When they take chances, we hope and pray they will succeed. When they dream, we dream along with them.
Not for one minute do we doubt their commitment to the cause, the movement and the civil rights experience of the early 1960's. 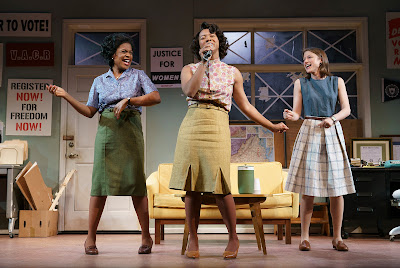 In conclusion, "Cadillac Crew" is a powerful, relevant drama that challenges its characters and audiences about race and segregation in ways that make it completely universal. Stirring, imaginative and emotional under Jesse Rasmussen's direction, it features a strong ensemble cast of four who aptly convey the size and scope of playwright Tori Sampson's legitimate story. It is also a fitting conclusion to Yale Rep's stellar 2018-2019 season - "El Huracan," "The Prisoner," "Good Faith" and "Twelfth Night." And, in a world where racial prejudice, unrest and inequality still exist, it reminds us, that in order to move forward, we must work together, united as one one to officiate a better life for all. 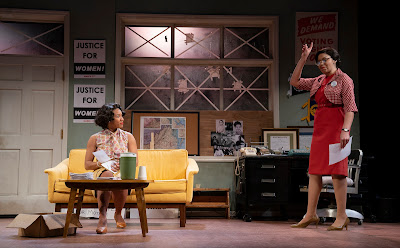