From the Desk of Jim R, Take 2, Column 163, A Review: "The Waffle House Five" (Pantochino Productions) 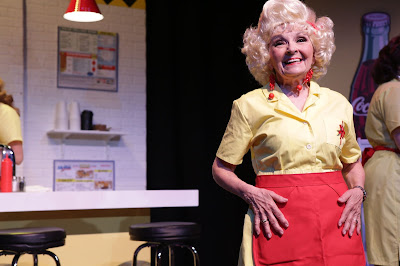 The story itself is a true one.

Edward Seward, a regular customer at the Grand Bay, Alabama Waffle House, was a kindly gentleman who would drive across the state line into Florida and buy a bunch of "Quick Pick" lottery tickets, which he would give "for free" to family, friends, loved ones and his favorite employees at the Waffle House.

Om March 6, 1999, the day of the big lottery drawing, three Waffle House employees checked their tickets, but sadly, none of them held the winning numbers. The next day, however, two other co-workers did the same thing and one of them, Tonda Lynn Dickerson, held the winning ticket worth $10 million, which she and everyone else agreed to split if they were ever to win the jackpot.

Sadly, Dickerson had a change of heart and refused to hand over any of her winnings to her Waffle House friends and co-workers. They, in turn, sued her and took her to court, alleging that there had always been a verbal agreement to split any monetary winnings among them. 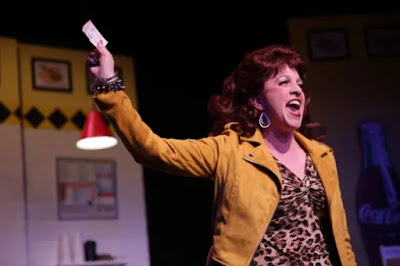 Their story, their fight, their work ethic and their court case, which includes the legal outcome according to Alabama state law (sorry folks, no spoilers here), have been set to music by Bert Bernardi and Justin Rugg in "The Waffle House Five," a smash-bang-wallop of an entertainment that makes for big, bold, heartfelt storytelling, enveloped in comfort, kitsch, candy coating and a pocketbook of good cheer. 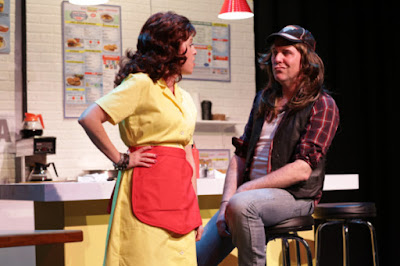 "The Waffle House Five" is a sweet, kind-hearted production that has the colorfulness of an off-Broadway musical and a West End fringe music hall confection, all rolled up into one. It hops. It jumps. It skips. It giggles. It provides a sugar rush of penny sweets. It distributes hearty portions of laughter, smiles and tears. It also puts that sweet smell of comfort food - in this case, waffles - right out the kitchen door and onto the table, front and center, for all to enjoy.

Staging and directing the two-act musical, Bert Bernardi brings the Waffle House story thrillingly alive with confidence, sensitivity, chutzpah, amusement and good, old-fashioned charm. As the story evolves, there's a home-spun naturalism to the piece, which when shaken and stirred, reveals apt doses of humor, surprise and poignancy of every possible shade. He has fun. We have fun. He smiles. We smile. He goes for the punchline. We get it and wait for another. He toys with our senses. We willingly go along for the ride. He changes direction. We sit back attentively wondering what's going to happen next. 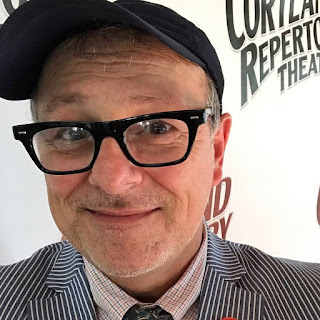 As the plot thickens, Bernardi also brings a sense of mystery to the project, in particular, the actual court case and the winning lottery ticket. We, in turn, anxiously await the verdict wondering who's telling the truth, who's lying, who's got each other's back, who's going down and how is everything  going to play out. We also see that Alabama is a state that has certain rules regarding oral contracts, gambling and gift giving. To say anything more, however, would spoil the fun and dampen the musical's amusing, surprising conclusion.

Here, as in last year's "Glitz," Bernardi brings a ripened exactness to  "The Waffle House Five," which allows it to breathe, settle and take shape. Nothing is taken for granted. Nothing is thrown in for extra measure. Nothing is staged as an afterthought. Nothing occurs out of the ordinary. In terms of story board advancement, Bernardi does sterling work to punctuate the key elements of the plot and thrust it forward with considerable ambition and technique.

Musically, the production is gleeful, energetic and bursting with delightfulness. 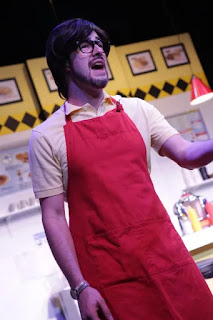 For "The Waffle House Five," Justin Rugg (music) and Bernardi (lyrics) have composed a playful, poignant and savory score of 12 musical numbers. They are: "Good Morning," "Little Red Pick Up Truck," "If We Hit It We Split It," " Winning Don't Mean Anything," "Better or Worse," "Girl Talk," "Doll," "Waffle House Five," "All Rise," "Mistakes," "Dreams" and "Exactly Who I Am." The songs themselves, all carefully chosen and tucked neatly into the framework of the story, are loaded with imagination, humor, sentiment, pathos and variety show camp. They also come gift wrapped with lyrics that are so clever and so witty, you can't help but marvel at Bernardi's ingenuity. Moreover, they're not just words on a sheet of paper. They're words that have meanings, values and many connotations. Big difference!
.
As composer, Rugg's music takes off with musical abandon and remarkable clarity. He knows exactly what he wants and he runs with it. He also knows how to shift moods, command attention, push boundaries and add additional nuance when necessary. In turn, nothing gets lost in the translation. Doubling as musical director, he moves "The Waffle House Five" cast from one musical number to the next most engagingly. Everyone is in perfect pitch, reveling in the musical's charms and abundant wit and sentimentality. All of the musical numbers, from solos to ensemble turns, are sung brilliantly. And when it comes time to harmonize, Rugg delivers a clean, crisp harmonious sound, rife with excitement and enthusiasm that serves the material and the story well. 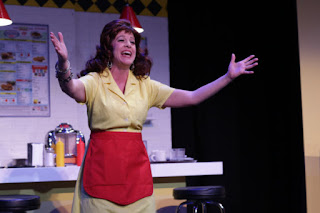 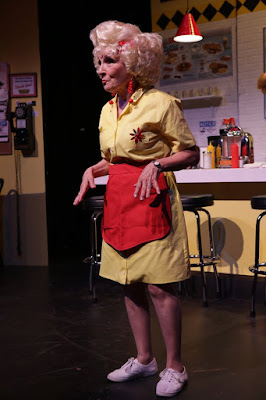 "The Waffle House Five" stars Marci Bing, Mary Mannix, Maria Berte, Rachelle Ianniello, Justin Rugg, Shelley Marsh Poggio, Don Poggio, Jimmy Johansmeyer, George Spelvin, Valerine Solli and Peighton Mash. As actors, everyone is outstanding individually or working opposite one another as one big ensemble. Given the show's comedic, heartwarming and musical premise, its creators give each and every one his or her moment to shine as "The Waffle House Five" moves from scene to scene with wicked delight. The talent, the gusto, the realness and the spirit of this entire group heighten's the production's merriment and its interconnecting stories and musicality. Taking hold of the material they are asked to perform, their level of trust, dedication, talent and performance is uncanny. Their southern drawl is inspired and sunny as is their down-home, welcoming charm. They love what they do 100 percent and it shows.

In the plum role of Jaycee Rae, the part modeled after the real-life Dickerson, Mary Mannix oozes charm, cold heartedness and venom so convincingly, you hope and pray her nasty Alabama scheming will get the best of her. No matter. It's a full-bodied, invigorating performance chock full of heated moments, emotional solos, barbed commentary and cat fights that the actress has great fun with. She also gives new meaning to the term "first-class bitch." Then again, that's the point, isn't it? 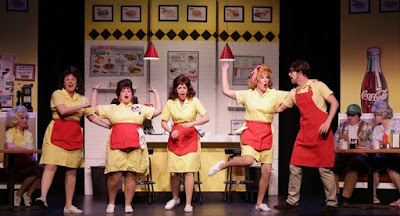 As Miss Lucy, Marci Bing is the real deal - hospitable, bubbly, welcoming, friendly - all characteristics that she plays so perfectly, one eagerly awaits her very entrance, her welcoming narration, her sweet-natured, insightful commentary and her natural comic vibes. Jimmy Johansmeyer, wearing a wig and looking like an outcast from the musical "Hair," delivers a memorable comic turn as Jaycee Rae's slippery, nasty, cheating husband. As Matthew, the charming and likeable Waffle House manager, Justin Rugg looks and acts as if he was plucked right out of the real-like Grand Bay, Alabama establishment and brought to Pantochino Productions via Doctor Who's Tardis.
In the role of the effervescent Angela, Rachelle Ianniello. never misses a comic beat. She's charming, funny, bubbly and personable. She's also completely in sync with Bernardi's wholesome and welcoming conceit for the musical. Maria Berte is well cast as the reverent Sandra and brings requisite southern charm and zest to the part and to the presentation. Shelley Marsh Poggio, as the cheeky, outspoken waitress Jackie, offers yet another sparkling musical performance, chock full of wit, vibe, spunk and personality. She can play any form of comedy inside out, top to bottom, left to right and front and center. Her comic timing and line delivery is priceless. What stage presence!

"The Waffle House Five" is a fun celebration of food, waitressing, friendship, greed, money, backstabbing, southern cooking, dreams, gossip and womanhood. It is a joyful experience for all, staged and directed with comic snap by "Waffle House" creator Bert Bernardi. The music is tuneful and delightful. The performances are real and energetic. The story is based, in part, on fact. And when all is said and done, you might have a hankering for a plate of homemade waffles smothered in butter and maple syrup or decide to take a quick run to your favorite convenience store to purchase a "Quick Pick" lottery ticket or two.

PS: For Pantochino Productions, all the names of  characters have been the changed for obvious reasons. And the setting has been changed from Grand Bay to Flat Bay, Alabama.

Photos of "The Waffle House Five" courtesy of KVON Photography 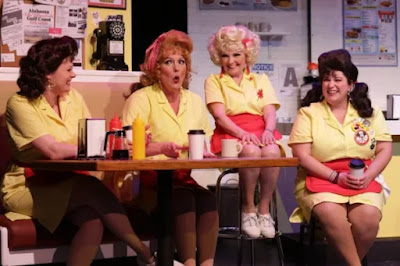 "The Waffle House Five" is being staged at Pantochino Productions (Milford Arts Council, 40 Railroad Ave., Milford, CT), now through May 19.
For tickets or more information, call (203) 937-6206.
website: pantochino.com
Posted by JimRuocco at 9:56 AM