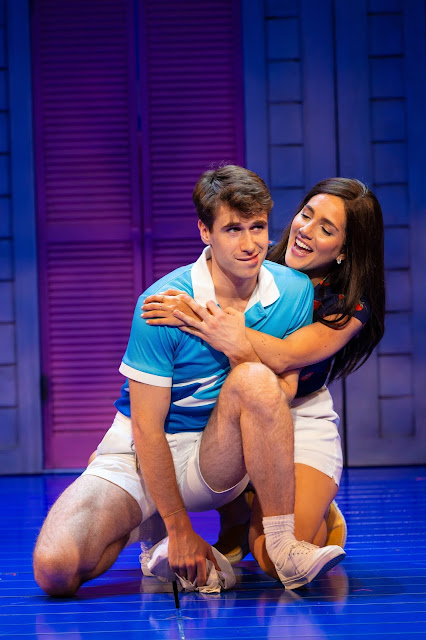 It's the perfect summer refreshment.

Hartford Stage's world premiere presentation of  "The Flamingo Kid" is a sweet and sentimental musical treat with plenty of dash, snap and verve to entice and charm, move and beguile and lovingly transport its audience through the lens of memory back to the summer of 1963, a time when parents and kids, unlike today, shared a palpable chemistry that was simple, direct, pleasing and heartfelt.

Like the 1984 motion picture, which was hilariously directed by the late Garry Marshall, the stage adaptation is a tender-hearted tribute to what makes us human, what makes us cry for acceptance, what makes us rebel or take chances and finally, what makes us find and grow into our own identity, whatever the path we choose to follow in life.

With a book by Robert L. Freedman ("A Gentleman's Guide to Love and Murder"), "The Flamingo Kid" transports Brooklyn teenager Jeffrey Winnick from his modest homestead in the borough to Long Island's exclusive El Flamingo beach club where he finds a job, a paycheck, a mentor and a girlfriend, all smack-dab in the summer of 1963. It's a tale that's been told before, but Freedman, savvy writer that he is, takes his inspiration, in part, from Neil Simon comedies, John Hughes movies and finally, from Garry Marshall and Bo Goldman who co-wrote the movie. That said, he crafts a no-nonsense musical comedy that's worthwhile, sugary, candy-coated and lots and lots of fun. And the story itself, despite its nostalgic undercurrents, speaks directly to today's audience. 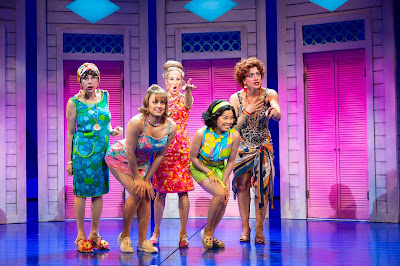 Like the film, his musical is rife with both humor and pathos about Brooklyn, Jewish parents, leaving home, beach clubs, sex, sun tan oil, umbrella cocktails, high stakes card games, old age, flirting, prejudice, society, social class, fancy cars, infidelity, dreams, confrontations, monetary obsessions and double-talking shysters. That's a lot of plot for a musical of this size but Freedman never lets things get too talky or too preachy. Instead, he moves things along swiftly and agreeably, always knowing what to emphasize, when to take a breath, when to insert a song or dance, when to cajole, when to surprise and how to frame and master a silly joke and punchline. No matter what he has up his sleeve, it all works quite swimmingly.

Here, as in "A Gentleman's Guide to Love and Murder," Freedman gets the adrenaline pumping in true escapist fashion, prompting chuckles and huge belly laughs in all the right places. He also knows when to knock you off balance with an amusing, well-orchestrated surprise or two or how to tug at your heart strings when it comes time to become serious during a heated family confrontation or disagreement. "The Flamingo Kid" also contains some amusing cultural Jewish-isms and slang that have become part of the American Yiddish culture. Kvetchy, whiny and midrashic, they too are delivered amusingly under Freedman's orchestration with well-intentioned chutzpah and delight.. 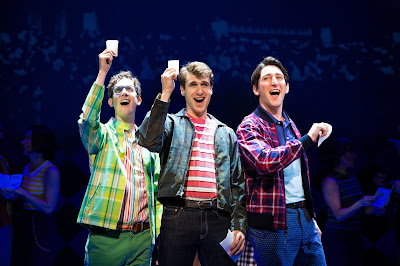 As director of both the Hartford Stage and Broadway productions of "Anastasia" and "A Gentleman's Guide to Love and Murder," Darko Tresnjak crafted two very different musicals that unfolded with surprising appeal, complexity and satisfying snap. As a showcase for his obvious talents, each production benefited from his colorful creative template, his instinctive casting and his cinematic flair for storytelling. "The Flamingo Kid" continues that proficient, articulate greatness.

Lively, funny and sweetly nostalgic, the two-act musical is a bankably unique, supremely confident production that retains the magic, wonderment and angst of the 1984 feature film, offset by Tresnjak's added layers of nostalgia, whimsy and sentiment. It's the same story, yes, but set to music, it's retelling is even more profound, layered and nuanced. Here, things are fast and fluid, direct and balanced with nary a halt or hiccup in the proceedings. Tresnjak knows exactly what he wants and, of course, he runs with it, backed by a creative team of savvy designers who give the musical the pulse, flair and eye-popping theatricality it demands. 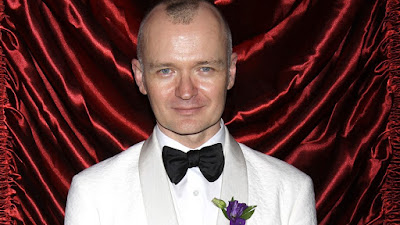 Staging the two-act musical, Tresnjak doesn't waste a single second. Pacing is everything here and as director, he knows when to let the material breathe, when to take a pause, when to let things settle and ferment and how to play a scene both dramatically, comically and musically. Here, as in "Anastasia" and "A Gentleman's Guide to Love and Murder," set changes, musical numbers, conversations, dances and sound and light cues are brilliantly timed and executed without the slightest hesitation. At the same tine, Tresnjak gives his production a three-dimensional kick, thrust and feel that works to full advantage from scene to scene, song to song, act to act. And that, in turn, that is what makes this production big, eye-catching and entirely watchable. 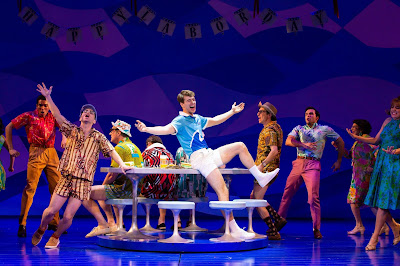 The songs themselves, all of which are important to the advancement of the story and the many different characters who sing them are sincere, original, big-hearted and joyous. Reflective of the show's 1960's setting, they unfold with a poppy verve and dazzle that is deft and irresistibly catchy. There are a lot of them, which means a lot of different things here and there, but they all fit seamlessly into the framework of the story without any form of calculation. Both Frankel and Freedman not only excel at telling varying stories through song, but they also craft a musical world that ripples with hope and good cheer, but doesn't ignore the hardships of the times, society's different classes and prejudices, the rags-to-riches euphoria of great wealth, the discovery of young love and the excitement that comes from following your dreams and being yourself despite the odds around you.

Musical direction for "The Flamingo Kid" is provided by Thomas Murray whose credits include the Broadway productions of "Anastasia," "A Little Night Music," "Honeymoon in Vegas," "The Bridges of Madison County" and "Light in the Piazza." Then and now, Murray is an accomplished musician who understands the heart, speed and pace of the music portrayed here, its fine-tuned details and undercurrents, its lyrical warmth and spirit, its song-by-song momentum, its periodic dips in style and presentation, its melodic delirium and its humorous hauteur.

Working alongside his exceptional orchestral team (Paul Staroba, Roy Wiseman,  Lu Friedman, Charles DeScarfino, John Mastroianni, Michael Schuster, Seth Bailey, Don Clough, Jordan Jacobson, Jamie Thorne, Nick DiFabio), Murray has great fun with the show's clean, witty and sharply focused musical score. Under his tutelage, the music is fresh, impassioned and individually skillful. All of the vocals are attractive sounding and reach their intended potential. That zest and command stands out over both acts and often prompts an exhilaration that's impossible to resist. Then again, that's the point, isn't it? 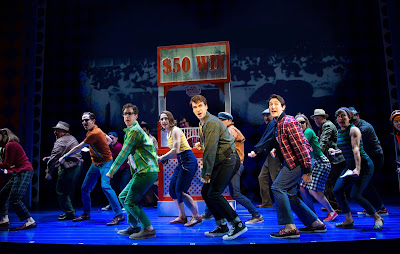 For 'The Flamingo Kid," Denis Jones, who also choreographed Broadway's "Tootsie," uses dance movement, dance patterns and splendid choreographic positioning that is cute, sugary, atmospheric, nostalgic and flavorful. There's not only a wonderful fluidity about it, which serves the material well, but it is perfectly in sync with the era itself, its coming-of-age undercurrents, its sun-drenched Long Island beach setting and the very different characters who habitat the two-act musical. It's decidedly unique and inventive. It's all in good fun. It gets the adrenaline pumping. It explodes in every color of the rainbow. It also makes you want to jump up out of your seat and partake in the festivities. Conga, anyone? 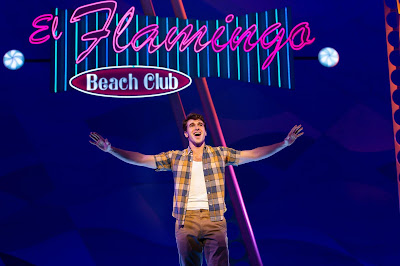 With a smile that's bright and twinkly, a spring and step that suggests a sly fox on the make and a fresh-faced innocence and boyish simplicity reflective of any popular 1960's television sit-com ("My Three Sons," for example), Brewer has both stage presence and stamina along with a confidence and sparkle that makes him a complete standout. There's a grace, dash and innocence in his performance. The part of Jeffrey is chock full of noticeable vitality and enthusiasm. He clearly enjoys being on stage alone or surrounded by his equally engaging cast. His singing is assured and polished. And when it comes time to dance, he jumps right in making it look like a spur of the moment discovery rather than something that's been rehearsed over and over and performed night after night. 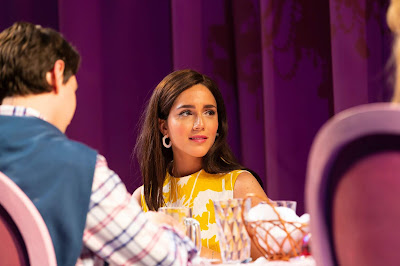 In the 2017 production of "Rags" at the Goodspeed, Samantha Massell, in the role of Rebecca, offered a moving, seamlessly executed portrayal of a young Jewish immigrant living in New York City's lower East side, circa 1910. It was an award-winning performance that was timely, relevant and passionate, offset by a commanding singing voice that pulsed with both melody and feeling.

In "The Flamingo Kid," Massell plays Karla Samuels, the Brody's free-thinking feminist niece who finds romance at the El Flamingo with the lovestuck Jeffrey. Again, the actress shines, using that same abundant energy and verve that categorized her work in "Rags." Vocally, she makes every song she sings, entirely her own. And working alongside Brewer, she naturally embraces her character's passionate feelings and quiet longing for her weak-at-the-knees suitor. 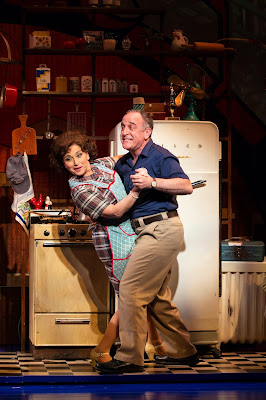 Adam Heller, as Arthur, Jeffrey's noble, working-class father, invests the role with an aching, heartfelt charm, sincerity and pulse that resonates particularly well throughout the two-act musical. Liz Larsen who plays Ruth, Jeffrey's mom and Arthur's devoted wife brings the right amount of pathos, sentiment and understanding to the part. Her scenes with both Heller and Brewer are fraught with real, honest-to-goodness emotion and resolve.

Marc Kudisch throws himself head first into the scene-stealing role of the brash, egotistical, prejudiced Phil Brody, It's a showy role that the actor crafts to such devious perfection, you never once get the sense that he is acting. He doesn't just play the part, he owns it. So much so, that when he gets his just comeuppance during the second half of Act II, you can't help but snicker with real delight. Lesli Margherita, as Phyllis Brody, Phil's flirty but unhappy wife, is a constant delight whenever she's on stage. Her performance is full of playful wit and sarcasm along with a shimmering sexiness that is utterly convincing and delightful. Her bold, uninhibited glances at the young men  who populate the El Flamingo are a real hoot.

Poignant, cheerful and full of marvelous wit, "The Flamingo Kid" is astonishingly good musical theater. It is jam packed with energy, clarity and rhythmic musicality. Darko Tresnjak's expertly paced direction is expressed with playful abandon by his stellar ensemble cast.  The show itself is gorgeous to look at. The songs and dances are rife with 1960's innocence, spunk and spirit. And finally, "The Flamingo Kid" brings Darko Tresnjak's classy tenure at Hartford Stage to a close with a fine, uplifting, memorable flourish. 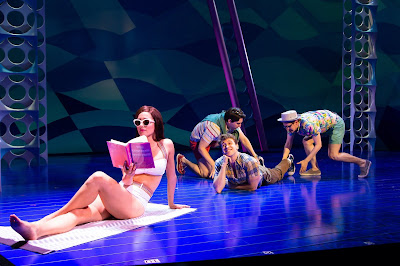 Photos of "The Flamingo Kid" courtesy of T. Charles Erickson