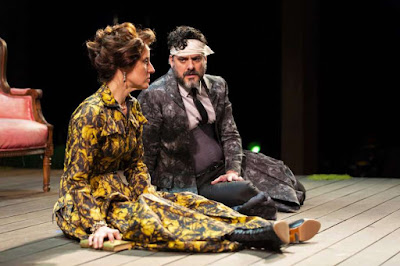 Henrik Ibsen's "A Doll's House" was a play about the emancipation of women.in 19th century society. Though the playwright stated he "was not a feminist," he did believe, however, that women had an equal right as men did to develop as individuals, find their own position in society and upon doing so, "become complete human beings."

In "A Doll's House, Part 2," a wildly conducive work that continues Ibsen's hypnotic story without the words and revolutionary influences of the celebrated playwright, it's been 15 years since Nora Helmer slammed the door on her husband, her children and her past and went out into the world to create a brand new life for herself with no connection to her bourgeois life or none to explain her curious existence far beyond the confines of her 19th century, middle-class home in Norway.

That slammed door, which reverberated across the world with stirring repercussions when "A Doll's House" was first performed, was now re-opened. And with it, came all sorts of questions about Ibsen's celebrated heroine, who, in her own words, admitted that she was living in a fictitious world  of "sugarplums and playthings" having been denied her dignity as a woman, which, as the end of "A Doll's House," prompts both her exit and rebellion.

Where did she go?
How did she survive?
Was she spurned or shunned?
Was her exit a smart or reckless move?
Who did she become?
How did she support herself?
Did she find happiness?
More importantly, did Torvald Helmer actually file for divorce? And if he did, where exactly is the legal document proving the decree absolute?
And oh yes, why is she back?

Fodder for sophisticated arguments?
The dart of  Ibsen's vitriolic pen so packed with many hidden forces, finds itself dabbed in freshly minted black ink. 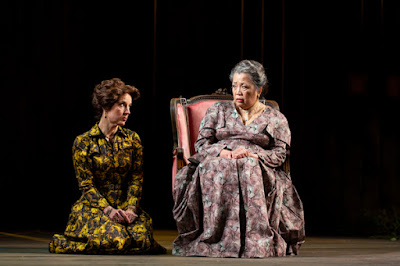 In Long Wharf's invigorating, wildly pumped up staging of "A Doll's House, Part 2," those questions and more are addressed and answered  in this smart, freestanding, oddball entertainment of sorts that thrusts Ibsen's characters in a brand new light with a brand new story that is edgy, crazy, profound, juicy, comforting, strange and passive-aggressive. From the start, it's obvious that this theatrical piece was not created to equal or copy the dramatic sweep, originality and frenzy of  "A Doll's House." Instead, it simply takes its cue from Ibsen's landmark play and seizes the opportunity to become its own period voice through a more contemporary lens.
With Will Davis as director, it works ever so agreeably to engage, titillate and indulge. It is also completely different from every other "Doll's House" before it, including the original "Part 2" Broadway production that starred Laurie Metcalf and the most recent incarnation, directed by Jenn Thompson at TheaterWorks in Hartford.

Written by playwright Lucas Hnath, "A Doll's House, Part 2" is peppered with a knowledge and understanding of Ibsen's original work and the playwright's visionary thoughts and themes about marriage, rapacity, individualism, divorce, hypocrisy, secret lives, fearless spirits and doomed relationships. But the comparisons stop there. Up close, this isn't an homage to Ibsen or something steeped in nostalgia despite many references to the far superior "A Doll's House" and its key story points. Instead, Hnath gives his work a decidedly juiced-up modern heartbeat, offset by a very feminist political message and contemporary language and slang including the words "fuck," "shit" "pissed" and so on. It's hardly jarring or controversial. It's just not Ibsen - style, structure, position or language. And, for the most part, that's o.k. "A Doll's House, Part 2" dances to its own, in-your-face individuality. 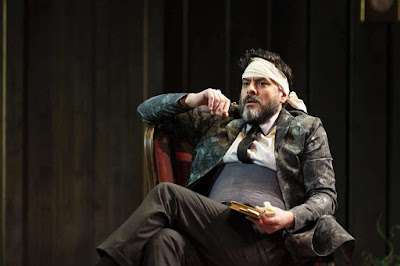 What's important here are the four central character's of the piece -  Nora, Torvald, Emmy and Anne Marie -  their evolution, their growth, their thoughts, their idiosyncrasies, their neuroses - as seen through the eyes of Hnath. Continuing Ibsen's much admired story, the playwright concocts a deft, imaginative, well-versed drama with words, passages and tongue-twisters that are assiduous, rhythmic, emotional, crafty and purposely fucked up. There's a lot going on in this plucky 95 minute drama as this completely messed-up quartet wrestle with ideas, dilemmas, conflicts, stumbling blocks and compromises as people from a another century.

As penned by Hnanth, most of "A Doll's House, Part 2" is edgy, well positioned and smartly nuanced. In particular, the arguments, the revelations, the confrontations, the disturbing melodies, the prevalent notions, the atmospheric idioms and the wide awake language. It's a play that stands proudly and reverently on its own but has absolutely nothing to do with Henrik Ibsen. Then again, that's the point. Despite the familiarity of the characters, Hnanth  tries to make everything that happened in "A Doll's House" seem new again. It is why this sequel exists. 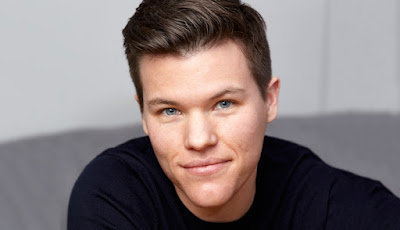 At Long Wharf, "A Doll's House, Part 2"  is being staged by Will Davis, an award-winning director and choreographer whose credits include "Evita," "Men on Boats," "Sorry Robot," "Road Show," "Everybody," "The Carpenter" and "Duat." A director with a strong sense of avant-garde, revolutionary inertia and crafty humor all rolled up into one, he is not only a natural fit for Hnanth's sequel, but one who seizes the opportunity to bend the rules, fuck with your senses and take you on a journey like no other. He also finds the humor in dramatic lines that include "I'm pissed" and "Fuck you, Nora."

As director, Davis uses broad, strong colors and marvelously timed vaudevillian flippancy and nuttiness to make his interpretation dance, sparkle and take flight. Mind you, none of this has anything to do with Ibsen, including Arnulfo Maldonado's colorful, but strangely misfired non-Norwegian setting, but in Davis' eyes, none of that really matters. He, nonetheless, fuels "A Doll's House, Part 2" with an energized fluidity and scope that's so inventive and theatrical, you sit back in amazement, reveling in his directorial genius, boldness and individuality. This man is so creative, he could probably stage "Evita" against the virtually uninhabited backdrop of Antarctica and get away with it. 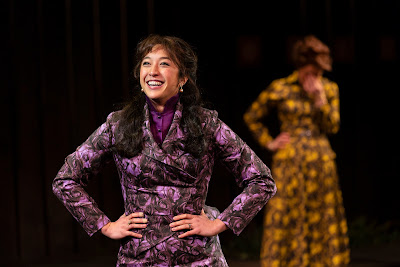 Here, however, his directorial approach is personal, stylized and conscientious. He gets the story, the characters and their evolution before the final fade out. He also understands the mechanics associated with period drama from its confined staging and rangy acting techniques to how to build and shape a sequence in terms of character, line delivery and story advancement. He also takes chances and liberties with the material and runs with it. In particular, his use of lighting, his use of sound effects, including lots of buzzing bees, birds, flying insects and a cuckoo clock. As director, he also lets the piece sit and breathe and often lets the characters pause and reflect, completely lost in space, re-examining their innermost thoughts and emotions. It's a directorial conceit that he pulls off quite swimmingly. 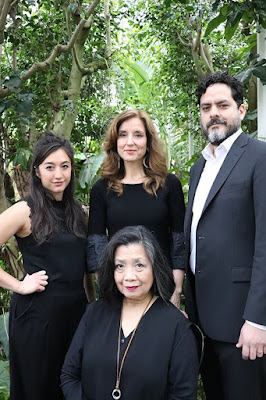 Bofill, an actress with a commanding, natural stage presence, takes the lead role of the outspoken, fiercely-independent Nora Helmer, grabs it by the horns, makes it her own and runs with it for a full 95 minutes never once losing character, perspective or focus. It's a compelling, progressive turn that deftly shows how the character of Nora has evolved over 15 years and developed into a woman of power, wealth and substance. It is also one that allows the actress to dance to her own rhythmic beat, succumb to the wit, charm and explosiveness of the material before her and interact wholeheartedly with the other on-stage players. In the pivotal role of house servant Anne Marie, Mia Katigbak offers a strong, intuitive performance that sparks immediate interest whenever she's on stage. Her performance, often true to the character created by Ibsen whenever the playwright permits it to be, is layered, compassionate, driven and bruised. Elsewhere, her interaction with Bofill  is involved and personal and one coupled with fundamental grace, purpose and precision.

As Nora's husband Torvald, Jorge Cordova  looks and acts very much like the controlling, pompous, priggish, intolerable, self-absorbed character channeled by Ibsen. Acting wise, he gives a showstopping performance that is rich in nuance, drama, satire and shamelessness. His command of the play script and his role in the story never once wavers for a second. He also has great fun with the play's over-the top flourishes (just watch what he does with his costuming whenever it comes time for him to sit down in the play's only chair) and it's playful idiosyncrasies. His comic/dramatic rapport with Bofill is completely palpable, fiery and intense. As the teen aged Emmy Helmer, one of Nora's abandoned children, Sasha Diamond is properly aggressive, spastic and off-the-wall, a character conceit the actress invests with playful, wicked abandon. Under Davis' direction, her emotions are real, goofy and notably centered, as is her hilariously timed eating sequence that has the actress conversing while munching and picking on some green stuff ( string beans, perhaps). It's absolutely hilarious.

Inspired by the original Henrik Ibsen play about the denunciation of a doomed marriage and its door-slamming denouement, "A Doll's House, Part 2" exists in its own contemplative world as playwright Lucas Hnath pays homage to the 1879 masterwork and offers a newly engaged work in the modern vernacular. Acerbic, provocative, anxious and intentionally wicked, "A Doll's House, Part 2" makes for inspired, edgy, character-driven theatre. It's quick, hypnotic and well-played. It toys with your senses. It gets you thinking. It is performed by a quartet of marvelously seasoned actors. And finally, there's Will Davis, a theatrical impresario who makes the impossible happen with a trip of the light fantastic that's abstract, immersive, ground-breaking and highly original. 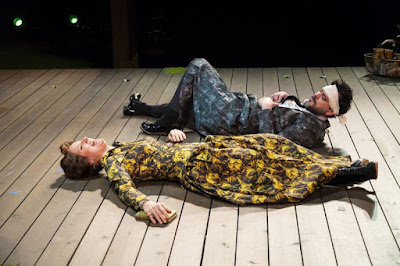