From the Desk of Jim R, Take 2, Column 164, A Review: "The Full Monty" (Downtown Cabaret Theatre) 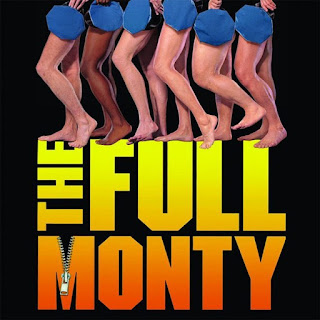 It's more than just gags about exposing your willy, baring your bum and taking off your clothes a la striptease.

The musical version of "The Full Monty," which takes its cue from the popular 1997 British film of the same name  tells the same story -  six unemployed steel workers decide to stage a one night only strip act for hard cash - with a big reveal that leaves them buck naked and full frontal amidst howls, screams, applause, cheers and standing ovations from a very excited audience. 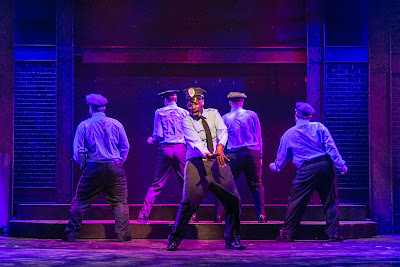 This isn't "My Fair Lady," Oklahoma!" or "The Sound of Music."
It's "The Full Monty."
So what you see - and trust me, there's a lot to see- is strictly intentional.

At the Downtown Cabaret where "The Full Monty" is enjoying a very healthy revival, the musical, which includes some iconic lines from the Simon Beaufoy screenplay,  is full of laughter, heart, warmth and vitality. It is quick, playful and organic. It never runs out of steam. It knows exactly what it is and where it is going. And finally, it's a genuine crowd pleaser with nothing more on its mind to entertain, which it does, ever so convincingly.

Staging "The Full Monty" is Andrea Pane who also appears in the production as a professional male stripper named Buddy "Keno" Walsh," who, has no trouble letting it all hang out, given some pretty fancy dance moves by choreographer Jennifer Kaye. Making his DCT mainstage debut, Pane rocks the stage, so to speak, with a fond, often outrageous appreciation for the material which, when unleashed, lets the musical glide, thrill, excite and titillate. 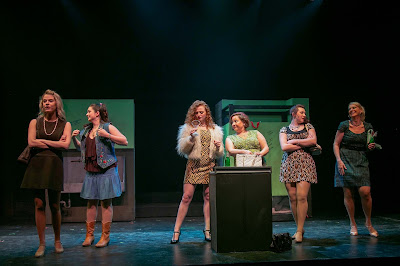 As "The Full Monty" evolves, Pane's direction is relaxed, cheery, rebellious and ribald. The show is stocked with characters who fit the bill for this sort of musical nonsense, but never once does Pane treat them as stereotypes. Instead, he respects them, has fun with them and paints them in big, broad, strong colors, which makes every single one of them stand out. He is also mindful of the show's original conceit, as laid out by Terrence McNally who wrote the book for the musical. It also takes balls to pull off the show's final striptease scene, but working alongside Kaye, the duo craft a frenzied wild ride that unfolds with just the right amount of in-your-face brashness to carry the show's fearless six to "Magic Mike" glory.

Kaye, as choreographer, not only nails the striptease choreography with energetic flourish, but brings infused, isolated fun to the show's non-strip musical numbers. The cast, in turn, have great fun with her snappy, sexy dance moves, maneuvers and pairings, thus, making each and every one of them stand out with the pulse and musicality envisioned by the show's creators.

Featuring music and lyrics by David Yasbek, "The Full Monty" uncorks 14 musical numbers under the deft musical direction of Tom Conroy (also at the piano) and his tremendously talented orchestral team of Michael Mosca (guitar), Gary Ruggiero (reeds), Fedel Volpe (trumpet), Rodger Post (drums) and Joe Sinaguglia (bass).
They are "Scrap," "It's a Woman's World," "Man," "Big Ass Rock," "Life With Harold," "Big Black Man," "You Rule My World," "Michael Jordan's Ball," "Jeanette's Showbiz Number," "Breeze Off the River," "The Goods," "You Walk With Me," "You Rule My World (Reprise)" and  "Let It Go."
The songs themselves, are serviceable to the story and the characters who sing them, but this is not traditional Broadway musical fare. Not exactly hummable stuff, the musical numbers, nonetheless, are accessible, plot-driven and entertaining. But the minute they are over, they are quickly forgotten. 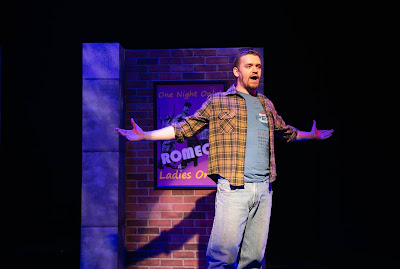 In the role of Jerry Lukowski, originated in the 2000 Broadway production by Patrick Wilson, Equity actor David Webb is the real deal. He gets the character. He understands the character. As an actor, he owns the character. Like Wilson, he is likeable, charming, carefree and passionate. There's also a refreshing honesty and touching reality to his performance, offset by a well-honed, melodic set of vocal chops that complement Jerry's many vocals, including "Scrap," the show's opening anthem about unemployment and lost opportunities and the sweet, tender-hearted ballad "Breeze Off the River," which figures prominently in Act II.

Brendan Garrett hams it up most agreeably as Noah "Horse" Simmons and nearly stops the show with his edgy, raucous rendition of "Big Black Man" in much the same way as Andre DeShields did in the original Broadway production. Malcolm and Eddie, played respectively by Max Helfand and Jeff Jannitto, offer sweet, confident performances as two young men who announce their budding homosexual relationship in Act II with the bittersweet reprise of "You Walk With Me." Lauren Bell as Pam Lukowski and Margaret Buzak as Vicki Nichols bring a real sense of purpose and commitment to their housewife roles whenever they are on stage. They are engaged and invested, both musically and performance wise and contribute greatly to the evening's channelled enjoyment.

In conclusion, "The Full Monty" has a lot going for it. It is a fitting conclusion to Downtown Cabaret's 2018-2019 season of shows, which included the gumdrop gooey "Legally Blonde" and the syrupy-sweet "Annie." Its funny, in-your-face humor is fully realized. The cast is in top form. And during the last five minutes or so when the unemployed underdogs get their kit off, a lot of cheek goes a very long way much to the delight of every excited, cheering female in the audience. It simply cannot be helped. 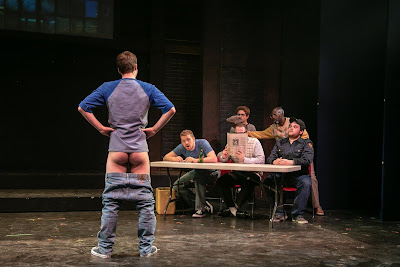 Photos of "The Full Monty" courtesy of Richard Pettibone/Ghostlight Photography