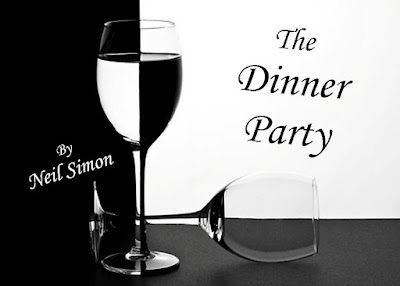 The white-painted French doors open and close when they are not locked.
The champagne is chilled and ready.
The table for six is set for dinner.
The invited guests arrive one by one.

One big problem: No one knows exactly who sent them the invite that brought them together in the private dining room of a posh restaurant somewhere in the heart of Paris.

Is this a joke?
Is there really a diner?
Is this a sinister prank?
Bon Appetit?
What the hell is going on?

"We're locked in like a goddamn Agatha Christie mystery," one of the female guests cries. 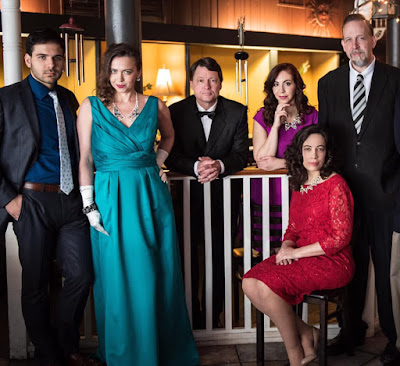 In Neil Simon's "The Dinner Party," the latest offering from the long-running Orange Players, laughter reigns, couples fight, doors slam, egos are bruised, secrets are unleashed, drinks are poured, marital infidelities are recalled and exactly who is who and what is what is dished out, pickled and cubed with devious relish.

"The Dinner Party" dishes up the laughter in typical Simon fashion, but the play itself is very different from the playwright's earlier works including "Barefoot in the Park," "Broadway Bound," "Brighton Beach Memoirs," ""The Odd Couple" and "Come Blow Your Horn." And that's o.k.

What's important here is Simon's talent for comedy and his ability to make people laugh. On that level, "The Dinner Party" succeeds swimmingly. And like Oscar Madison, Felix Unger, Corie Bratter, Eugene Morris Jerome and Alan Baker, all the characters in this 90-minute production are  flawed, confused and nutty, each with their own set of emotional baggage. They are also serious, depending on their whim or the moment. Very serious. 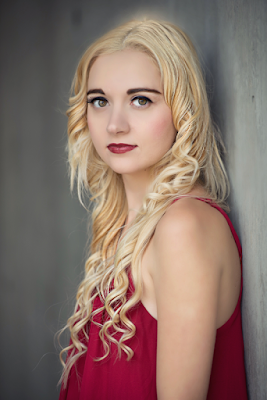 Well versed in the mechanics of comic staging and farce, director Chelsea Dacey is the perfect fit for "The Dinner Party." She gets Neil Simon and his particular brand of humor. She knows the script  inside out and upside down. She knows how to get a joke without reaching for a laugh. She is quick and sharp-witted when trying to shape and balance the playwright's shifts in tone, his dressed up shenanigans, his manic sense of belonging and his ability to pull a new trick out of the hat in ways that you never saw coming. She also understands that less is more when going for the big punchline or the satisfying pay off.

As "The Dinner Party" evolves, neither a word, a beat or a pause seems wasted with Dacey calling all the shots. Her infectious mix of wisdom, exuberance and tenderness strikes all the right chords as does her ability to find truth and realism in Simon's detailed expose before letting it rip. 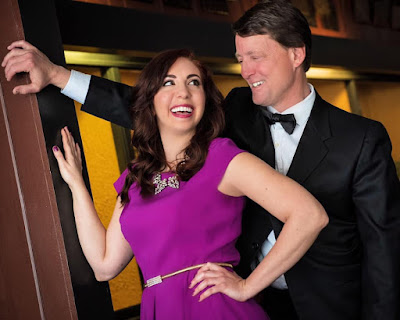 As director, she brings a certain vitality and pulse to the piece which makes it spin and resonate. She also shows us that there is more to this Neil Simon play than just punch lines. Underneath, beats a serio-comic warmth and honesty that's the real deal and can't be faked.

Staging the play, Dacey knows exactly what buttons to push and when. Much of the comedy here depends on entrances and exits, doors opening and closing and people running on and off the stage, etc.  It's all about timing and Dacey has things blocked to the millisecond, which works to her advantage. Comic lines are articulated effortlessly with both sets ups and pick ups falling neatly into place. Under her tutelage, everyone involved in "The Dinner Party" also has a sense of purpose, motivation and objective, matched by an impassioned energy that allows the material to evolve constantly in accordance with Simon's fast, clean-cut theatrical flurry. 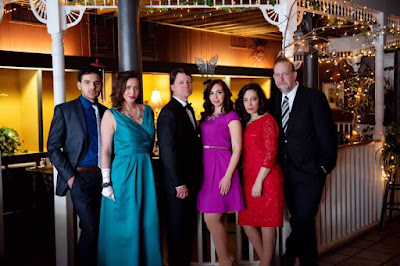 "The Dinner Party" stars Kristopher Bates as Albert, Taryn Chorney as Mariette, Lisa DeAngelis as Yvonne, Rebecca Miller as Gabrielle, Alexander Borghetti Ferreira as Andre and Hugh Tucker as Claude. All six are absolutely perfect for their respective roles (stellar casting on Dacey's part), each delivering strong, serious comic performances that reflect the playwright's humorous conceit, his dramatic tones and undercurrents, his gift for conversation and his well-delivered one liners.

DeAngelis, who portrays Yvonne hilariously projects her character's hyper-intense quirkiness and neuroticism. She wrings the most out of every line and pause. Miller, as the very classy Gabrielle, is the play's last dinner guest to arrive. She not only swoops in with some very grand gestures, but gets some very funny Simon zingers and dialogue thrown at her which she delivers with wicked aplomb. As Mariette, Chorney gives a well-rounded, engaging performance full of wit, pathos and passion. She too is a natural when it comes to all things Simon.

As Albert and Claude, Bates and Tucker are both in sync with Simon's off-the-wall nuttiness, crazy punchlines and ensuing mayhem. Ferreira, in the role of the smug, self-centered Andre, also gets laughs, especially when he loses his cool with Albert and Claude or finds himself at odds with some of the female characters during the second half of the play.

Laughter is the bill of fare in Neil Simon's "The Dinner Party." A certified crowd pleaser, it is entertaining enough, chock full of some pretty funny one-liners, cleverly orchestrated repartee, a free-spirited plotline and six colorful characters, each different from the next. Chelsea Dacey's fluid, well-oiled direction keeps things rolling merrily along. And the show's cast of six, all handpicked by Dacey, not only have a ball with Simon's dialogue, but retain a classic high energy and spirit that allows "The Dinner Party" to resonate, sparkle and kick the wacky and idiosyncratic material into high gear. They also look smart and elegant, wearing wardrobe and costuming designed by Dacey herself. 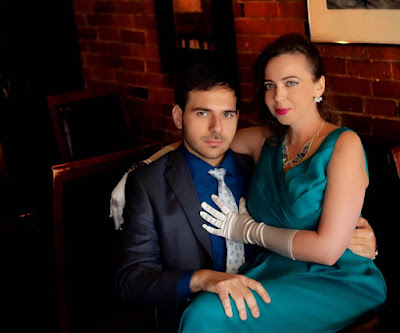 "The Dinner Party" is being staged by the Orange Players (High Plains Community Center, 525 Orange Center Rd., Orange, CT), now through May 11.
For tickets or more information, call (475) 227-7547.
website: orangeplayers.net.

Posted by JimRuocco at 3:29 AM